More than 100 rarely seen photographs of Harold Lloyd – along with Charles Chaplin and Buster Keaton, one of the top silent film comedy stars – will be showcased in the Academy of Motion Picture Arts and Sciences’ new exhibition, “Out on a Ledge: Photographs of a Comic Genius, from the Harold Lloyd Collection,” which kicks off on Friday, Sept. 15, ’06, in the Academy’s Grand Lobby Gallery on Wilshire Boulevard in Beverly Hills.

According to the Academy’s press release, the exhibit will feature images showing Lloyd both in front of and behind the camera. Most of the photos have never been displayed publicly.

Exceptions to the rule: 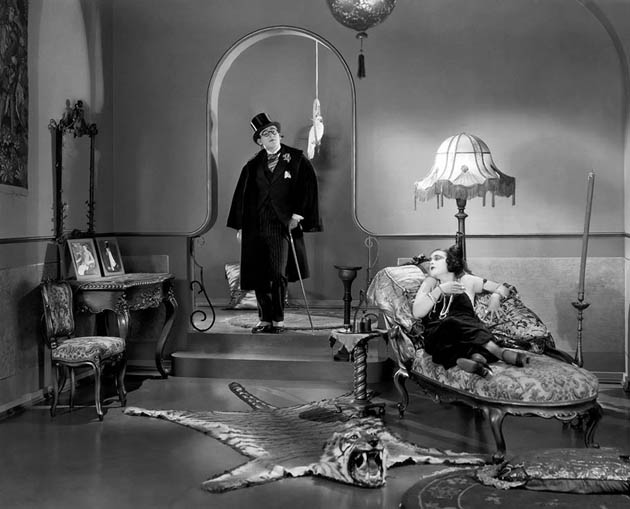 Worshiped as a comic genius, Lloyd, much like Chaplin and Keaton, was the key creative force behind most of his starring vehicles. That helps to explain why his directors[1] – e.g., Fred C. Newmeyer, Sam Taylor, Ted Wilde – are hardly remembered even among silent film aficionados.

Also like Buster Keaton, Lloyd was known for performing his own stunts. One marketing stunt, which had him posing for still photographs, resulted in his losing the thumb and index finger of his right hand after a bomb – mistaken for a prop – went off.

One of the founding members of the Academy of Motion Picture Arts and Sciences, he was awarded an Honorary Oscar in 1952 as a “master comedian and good citizen,” partly in recognition of his charity work chiefly connected with the Freemason group known as The Shriners. (According to some, also partly as a rebuff to the “left-leaning” Charles Chaplin, whose entry visa to the United States had been revoked at that time.)

“Out on a Ledge: Photographs of a Comic Genius, from the Harold Lloyd Collection,” will be on display through Sunday, Dec. 17. The Academy’s galleries are open Tue.-Fri., from 10 a.m. to 5 p.m., and weekends, noon to 6 p.m. Admission is free.

The Academy of Motion Picture Arts and Sciences is located at 8949 Wilshire Boulevard in Beverly Hills. For more information call (310) 247-3600.

[1] Sam Taylor is best known for directing and penning the screen adaptation for the early Mary Pickford-Douglas Fairbanks talkie The Taming of the Shew (1929), which – according to mythmakers – featured the notorious credit “additional dialogue by Sam Taylor.”*

Ted Wilde was a nominee in the Best Director, Comedy Picture category in the first year of the Academy Awards. He lost to Lewis Milestone for Two Arabian Knights, starring William Boyd, Mary Astor, and Louis Wolheim.

That particular category was discontinued the following year.

* This particular Sam Taylor is not to be confused with playwright/screenwriter Samuel Taylor a.k.a. Samuel A. Taylor, whose credits include Billy Wilder’s Sabrina (1954), George Sidney’s The Eddy Duchin Story (1956), and Alfred Hitchcock’s Vertigo (1958).

I was due to see this on a trip to the USA and unfortunately missed it. A bit past the moment now, but it never ceases to amaze me that Lloyd is so poorly remembered today in comparison to Laurel and Hardy, Chaplin or Keaton. Very sad, but I hop the exhibition helped interest people in this true comedic genius.