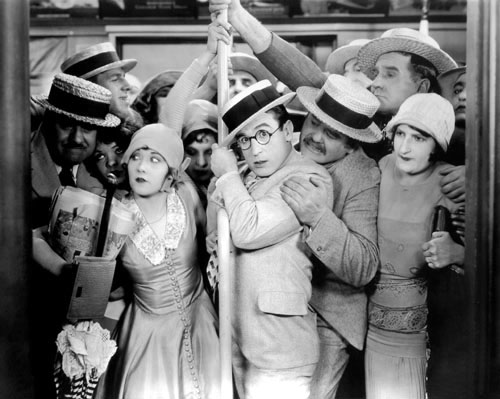 Silent-comedy fans will be rejoicing today, Aug. 5, as Turner Classic Movies’ “Summer Under the Stars” series continues with a day dedicated to Harold Lloyd, one of the biggest box office draws of the 1920s.

Personally, I’m not a fan of knockabout silent comedies, which usually leave me as stone-faced as Buster Keaton. That said, Lloyd’s go-getter was a pleasant character (even if a tad creepy-looking, what with those geeky glasses and all that make-up plastered on his face), and some of his stunts remain as remarkable today as they were more than eight decades ago. Particularly memorable is his spider-man bit in Safety Last! (1923), in which he scales the side of a Los Angeles building.

Speedy (1928), directed by Ted Wilde (Lloyd later asserted he more or less directed his own films), has a special place in Oscar history as one of the three nominees in the best comedy direction category, which only existed in the Academy Awards’ first year. (For the record, the other nominees were Charles Chaplin – whose nod was later rescinded so he could receive a special statuette for his work in The Circus – and the winner, Lewis Milestone, for Two Arabian Knights.)

Lloyd’s other frequent leading lady of the 1920s, Jobyna Ralston, married Richard Arlen in 1927. Arlen was one of the stars of the war melodrama Wings, the first movie to win a best picture Academy Award.

I haven’t watched Movie Crazy (1932), yet, but even those who aren’t Lloyd fans should check it out if only because the lovely Constance Cummings (above) is in it. Also, Hollywood satires in those pre-Code days could be quite enjoyable.

Bebe Daniels, Lloyd’s frequent leading lady in the 1910s, deserves her own “Summer Under the Stars” day. After all, she became one of the perkiest movie stars of the 1920s, comfortable both in comedies and in melodramas (both on screen and off; at one point she was arrested and sent to jail for speeding, which earned her loads of free publicity). Later on, Daniels did quite well for herself in musicals as well. Who knows, perhaps TCM will have a Bebe Daniels Day next year.

3:30 AM From Hand to Mouth (1919)
In this silent film, a young burglar tries to save an heiress from kidnappers. Cast: Harold Lloyd, Mildred Davis, Snub Pollard. Director: Alfred J. Goulding, Hal Roach. Black and white. 22 min.

4:30 AM A Sailor-Made Man (1921)
In this silent film, a feckless young man joins the Navy to prove himself worthy of the girl he loves. Cast: Harold Lloyd, Mildred Davis, Noah Young. Director: Fred C. Newmeyer. Black and white. 47 min.

9:00 AM Why Worry? (1923)
In this silent film, a rich hypochondriac on vacation in the tropics gets mixed up with revolutionaries. Cast: Harold Lloyd, Jobyna Ralston, John Aasen. Director: Fred C. Newmeyer, Sam Taylor. Black and white. 63 min.

10:15 AM Girl Shy (1924)
In this silent film, a small-town boy raises a ruckus when he writes a book about how to handle women. Cast: Harold Lloyd, Jobyna Ralston, Richard Daniels. Director: Fred C. Newmeyer, Sam Taylor. Black and white. 80 min.

12:45 PM The Freshman (1925)
In this silent film, a naive college boy tries to join the football team after making a fool out of himself. Cast: Harold Lloyd, Jobyna Ralston, Brooks Benedict. Director: Fred C. Newmeyer. Black and white. 76 min.

2:15 PM For Heaven’s Sake (1926)
In this silent film, a millionaire tries to help save souls after he falls for a young mission-worker. Cast: Harold Lloyd, Jobyna Ralston, Noah Young. Director: Sam Taylor. Black and white. 58 min.

8:30 PM Feet First (1930)
A shoe salesman’s involvement with a band of crooks leaves him dangling from the side of a tall building. Cast: Harold Lloyd, Robert McWade, Barbara Kent. Director: Clyde Bruckman. Black and white. 91 min.

1:30 AM The Sin of Harold Diddlebock (1947)
When he loses his job, a middle-aged bookkeeper goes out on the town. Cast: Harold Lloyd, Jimmy Conlin, Raymond Walburn. Director: Preston Sturges. Black and white. 90 min.