Best known as a glamorous Hollywood star (Ziegfeld Girl, White Cargo, Samson and Delilah), the Viennese-born Lamarr (née Hedwig Eva Maria Kiesler), who would have turned 100 on Nov. 9, was also an inventor: she co-developed and patented with composer George Antheil the concept of frequency hopping, currently known as spread-spectrum communications (or “spread-spectrum broadcasting”), which ultimately led to the evolution of wireless technology. (More on the George Antheil and Hedy Lamarr invention further below.)

Somewhat ironically, Hedy Lamarr was an “invention” herself. Metro-Goldwyn-Mayer mogul Louis B. Mayer was an ardent admirer of dark-haired, silent film siren Barbara La Marr (1896–1926, born Reatha Watson), the star of melodramas such as Trifling Women and The Girl from Montmartre, and who was known as The Girl Who Was Too Beautiful. When MGM imported the Austrian-born Hedy Kiesler in the late ’30s, Mayer changed the name of the new dark-haired sensation to Hedy Lamarr.

As Lamarr would later recall, the name switch took place aboard the ship that brought her to the United States. Mayer was trying to come up with a glamorous replacement for Kiesler, but was unable to find an adequate option until the actress jokingly suggested “La Mer” (“The Sea” in French). That triggered Mayer’s recollection of his fallen idol, Barbara La Marr, and thus the Hedy Lamarr “invention” – new name, in addition to new hairstyle, new make-up, and new movie persona – came into being. 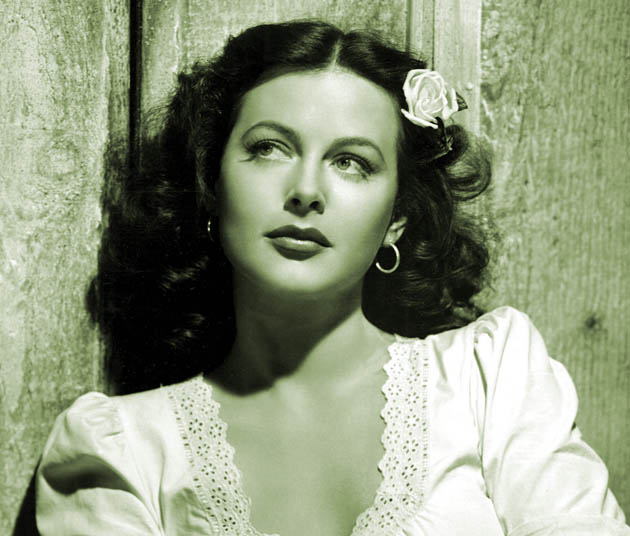 Based on John Steinbeck’s novel about the lives of Hispanic Americans in a Northern California fishing village, the ludicrously cast Tortilla Flat features Spencer Tracy, Warner Bros. contract player John Garfield, and Hedy Lamarr (instead of the originally considered Rita Hayworth) as “Hispanics.” Lamarr had to fight for the role if her ghostwritten autobiography,[1] Ecstasy and Me: My Life As a Woman, is to be believed. “They said I couldn’t play it,” she (purportedly) claimed in the book, “so I had a point to prove, to them and to myself.”

If so, Lamarr does indeed prove that she could look good in dark make-up, and that she could be a much more convincing performer than either John Garfield or Spencer Tracy – who had been just as awful (and as awfully patronizing) in his Oscar-winning turn as a Portuguese fisherman in Captains Courageous (1937).

But Lamarr or no, surprisingly enough Tortilla Flat‘s most effective performance is that of Best Supporting Actor Oscar nominee Frank Morgan, best remembered for playing the title role in The Wizard of Oz. Generally a major scenery-chewer with an irritating stuttering-and-sputtering shtick, Morgan, in a rare dramatic role, manages to fully convey the ethereal simple-mindedness of a social outcast whose companions are a pack of dogs. (For the record, Frank Morgan lost the 1942 Best Supporting Actor Oscar to another MGM performer, relative newcomer Van Heflin for Johnny Eager.)

Victor Fleming (Captains Courageous, Gone with the Wind, The Wizard of Oz) handled the proceedings. The Tortilla Flat screen adaptation was credited to John Lee Mahin and Benjamin Glazer. 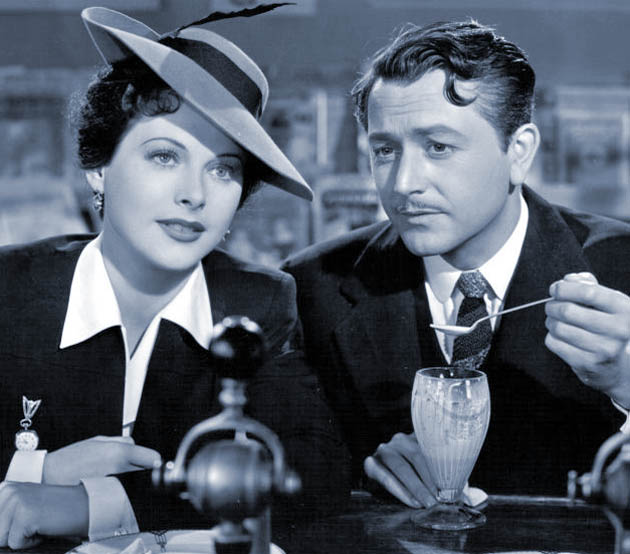 In H.M. Pulham, Esq., Robert Young (instead of the previously considered Herbert Marshall, Gary Cooper, and James Stewart) has one of his few starring roles in a major MGM release. Under the guidance of veteran King Vidor (The Big Parade, The Crowd), Young plays a businessman married to Ruth Hussey, but tempted to rekindle his relationship with a former flame, the independent-minded Hedy Lamarr.

Technically proficient (cinematography by Ray June; art direction credited to Cedric Gibbons and Malcolm Brown) and featuring a capable supporting cast that includes Charles Coburn, Van Heflin, and Bonita Granville, H.M. Pulham, Esq. suffers – like so many MGM productions of that era – from a lack of guts. As a result, both the drama, rendered nearly devoid of social context, and the performers – with the exception of the usually underrated Hedy Lamarr – feel bland and unconvincing.

As the stay-at-home wife, the reliable Ruth Hussey does try, but she isn’t helped by King Vidor and wife Elizabeth Hill’s screenplay adaptation of John P. Marquand’s class-conscious bestseller. And if you’re able to spot MGM newcomer Ava Gardner, who may or may not have been featured as an extra in H.M. Pulham, Esq., let me know where.

Hedy Lamarr and her six husbands

Hedy Lamarr was married six times. Here’s the list of her spouses:

Curiously, Markey had been previously married to Joan Bennett (Little Women, Scarlet Street) – who, following the Hedy Lamarr craze, went from blonde to brunette in the 1938 release Trade Winds. Bennett would remain a brunette for the rest of her career.

Gene Markey’s third wife, by the way, was another major Hollywood actress: Myrna Loy (The Thin Man, The Best Years of Our Lives).

The Acapulco-based Stauffer’s film credits were basically restricted to minor supporting roles in a handful of Mexican movies of the ’60s and early ’70s, such as Gilberto Gazcón’s Red Sky / Cielo rojo (1962), and Pancho Kohner’s The Bridge in the Jungle (1971), featuring John Huston and Katy Jurado. One exception was Paul Martin’s West German musical Marina (1960), starring Giorgia Moll.

Hedy Lamarr’s husband no. 1, Fritz Mandl, unsuccessfully tried to buy all copies of Gustav Machatý’s notorious 1933 Czech melodrama Ecstasy / Ekstase, in which Lamarr – at the time known as Hedy Kiesler – has a nude scene. In its review of the film, Variety referred to her close-ups under “emotional stress” as “extremely audacious.”

According to author David Shipman, Ecstasy was banned in Germany because Hedy Kiesler was Jewish, though online sources state that a censored version of Ecstasy – to disguise the star’s nudity – was actually screened in that country in 1935. If there was a later ban, the film’s sex and nudity were possibly the main culprits as Lamarr’s Jewish background remained a matter of conjecture for quite some time.[2]

Anyhow, even if Ecstasy did lose the German market, it found lots of admirers when it was presented at the 1934 International Film Exposition in Venice. Left unimpressed was Pope Pius XI, who had the official Vatican newspaper, L’Osservatore Romano, condemn it.

In the U.S., the State Department banned public exhibitions of Ecstasy in early 1935, although an edited version of the film reached American shores in 1937. The following year, Hedy Kiesler ceased to be; in her place, Louis B. Mayer’s invention, glamour girl Hedy Lamarr, was introduced in her first Hollywood film, playing fugitive Charles Boyer’s love interest in John Cromwell’s United Artists release Algiers. 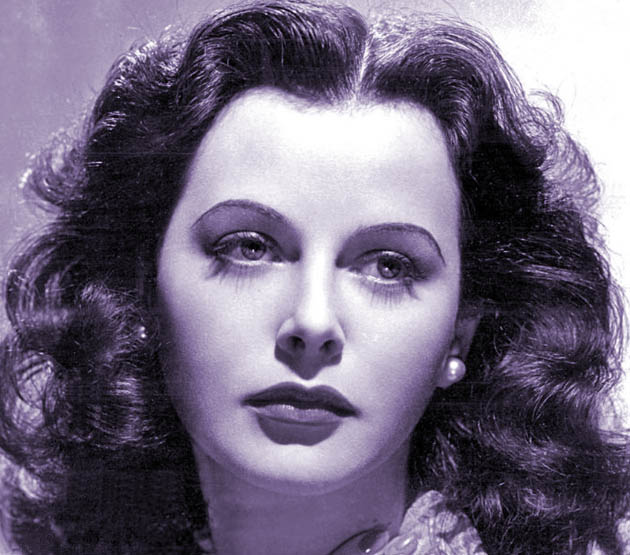 Because of problems during the making of I Take This Woman, co-starring Spencer Tracy and ultimately credited to director W.S. Van Dyke, Hedy Lamarr’s first Metro-Goldwyn-Mayer star vehicle turned out to be Jack Conway’s 1939 romantic melodrama Lady of the Tropics, with Robert Taylor as her leading man. I Take This Woman would finally come out in 1940.

Lamarr, who would never quite fulfill her early promise as either an actress or a major Hollywood star, remained at MGM until 1945. Her biggest box office hit would turn out to be a Paramount release: Cecil B. DeMille’s Samson and Delilah (1949), co-starring Victor Mature.

Hedy Lamarr’s last movie appearance was in the 1958 Universal release The Female Animal, in which she plays an aging movie star and the mother of (fellow former MGM actress) Jane Powell, both of whom vying for the attention of hunk George Nader.

Nearly four decades after The Female Animal, at the sixth Electronic Frontier Foundation’s Pioneer Awards ceremony held on March 12, ’97, at the San Francisco Airport Hyatt Regency hotel, Hedy Lamarr and – posthumously – George Antheil were honored with a special award for their development of the concept of “frequency-hopping.” EFF Staff Counsel Mike Godwin called the Lamarr and Antheil honor “remarkable for other reasons besides its recognition of a woman whose contributions were thought to be solely in the field of entertainment.”

At first, Lamarr and Antheil had hoped that their invention could play a role in defeating Nazi Germany; instead, as found on the EFF press release, the chief benefits of what became known as spread-spectrum communications would be granting access to the airwaves to “ordinary people with ordinary resources.” As a result, Godwin added, “this tool they developed to defend democracy half a century ago promises to extend democracy in the 21st century.” 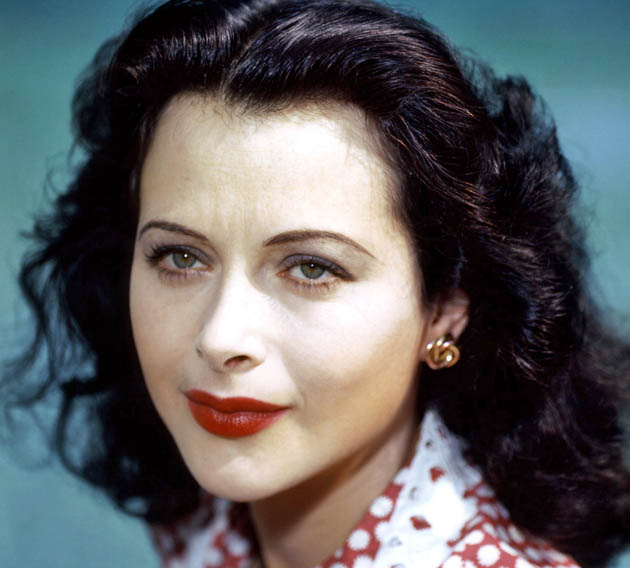 Another kind of ‘Hedy Lamarr invention’: ‘Ecstasy and Me’

[1] The Hedy Lamarr “autobiography” Ecstasy and Me: My Life As a Woman, first published in 1967, was actually co-written by Leo Guild and Cy Rice.

It’s unclear how much Lamarr actually contributed to the ghostwritten book. She later denounced it as “fictional, false, vulgar, scandalous, libelous and obscene.”

[2] According to Stephen Michael Shearer’s Beautiful: The Life of Hedy Lamarr, “Extase would only become notorious” after “Germany censored it primarily because many of the film’s participants were Jewish.” Shearer adds that Gustav Machatý’s film drew the largest crowds at the 1934 Venice Film Festival, where it was the runner-up for the top prize, the Mussolini Cup (which went to Robert Flaherty’s documentary Man of Aran).

As found in Klaus Kreimeier’s The Ufa Story: A History of Germany’s Greatest Film Company, 1918-1945, Ecstasy was initially banned by Nazi censors in Feb. 1933. Retitled Symphonie der Liebe / Symphony of Love, the film was finally given a green light for release in German territory in Oct. 1934 – but only after “extensive cutting” and, according to Ruth Barton’s Hedy Lamarr: The Most Beautiful Woman in Film, with two added scenes to tone down the story’s perceived immorality.

Barton adds that Machatý later claimed “that the film had been banned because Hedy Kiesler was Jewish, though there is no evidence to support this.”

You forgot to mention Ruth Barton biography of Hedy Lamarr see amazon; which corrects the stupid articles written about her by seeing the letters she wrote and family interviews.

But Ruth Barton’s Hedy Lamarr biography is mentioned in the article.

You mentioned inventor however you did not ellaborate