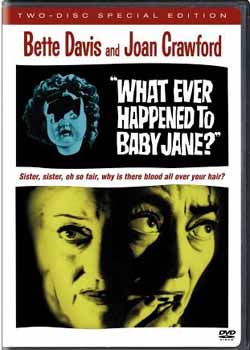 The California-born (Sep. 27, 1920) Farrell reportedly began writing near the end of World War II, in which he served in the Army Air Force. What Ever Happened to Baby Jane?, which came out in 1960, was Farrell’s second novel. Two years after its publication, it caused a sensation on-screen as a result of the pairing of two Warner Bros. veterans: Bette Davis and Joan Crawford. (The former MGM star became a WB star in the 1940s.) In the film, adapted by Lukas Heller, Davis and Crawford play two sisters – one a former vaudeville child star, the other a former movie star – gradually losing their physical and mental health in a decrepit mansion in Southern California. The ending offers a twist that – surprisingly – manages to be both believable and heartbreaking. (The story was remade as a TV movie in 1991, with real-life sisters Vanessa Redgrave and Lynn Redgrave in the Crawford and Davis roles.)

Director Robert Aldrich, who handled the proceedings, decided to film Farrell’s variation on the theme, What Ever Happened to Cousin Charlotte? Retitled Hush… Hush, Sweet Charlotte, and from a screenplay by Farrell and Heller, the 1964 Southern Gothic melodrama with a twist was set to reunite Davis and Crawford. But the latter, claiming illness, withdrew from the project. Another Warners veteran, Olivia de Havilland, was hired as a replacement. Like its predecessor, the enjoyably over-the-top Charlotte was a major moneymaker.

As a screenwriter, Farrell adapted (or co-adapted) to the small screen the silly horror tale The House That Wouldn’t Die (1970), starring Barbara Stanwyck; How Awful About Allan, based on one his novels, and starring Anthony Perkins and Julie Harris; and The Eyes of Charles Sand (1972), based on one of his own stories, and starring Joan Bennett.

For the big screen, Farrell wrote What’s the Matter with Helen? (1971), a less successful variation on the Baby Jane theme, directed by Curtis Harrington (who’d also handled How Awful About Allan), and starring Debbie Reynolds (in one of her best performances) and Shelley Winters.

Another of Farrell’s novels, Such a Gorgeous Kid Like Me, was adapted by François Truffaut into the 1972 black comedy Une belle fille comme moi, starring Bernadette Lafont and Claude Brasseur.