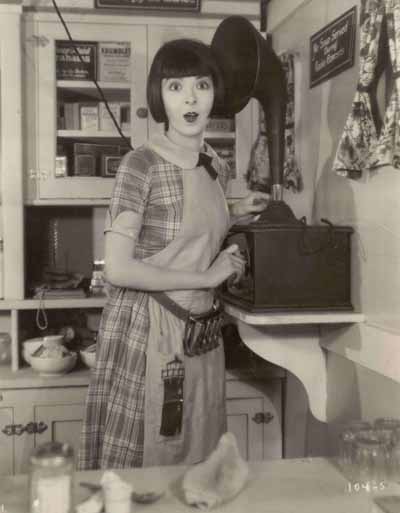 Her Wild Oat, starring Colleen Moore, has been found and restored. Photos are courtesy of the Joseph Yranski Collection.

Last March 29, I went to an Academy-sponsored Hollywood screening of the long-thought-lost 1927 Colleen Moore vehicle Her Wild Oat. This formulaic – working-class girl gets handsome prince charming – but agreeable comedy had been restored by the Academy Film Archive, from a print found at the Czech National Film Archive (website).

A few days after watching the film, I spoke with film historian and librarian Joseph Yranski – who also happens to be a good friend, so he’ll be “Joe” from now on. Joe met Colleen Moore in the early 1970s, and remained friends with her until her death in 1988. Additionally, Joe was indirectly responsible for the rediscovery of Her Wild Oat.

“At the time of the attack of the World Trade Towers on 9/11,” Joe wrote me, “Hugh Neely of Timeline Films was in Prague recording the musical scores for several Mary Pickford films for Milestone Films. The emergency meant that no planes were flying to the United States. So, with extra time to kill before he could return to the United States, he asked me about films to check out at the Archives and I told him to see about Colleen Moore and Her Wild Oat.”

That’s what Neely did. And the rest is history recovered.

Note: The information found in this article comes from Joe’s reminiscences of his conversations with Moore. 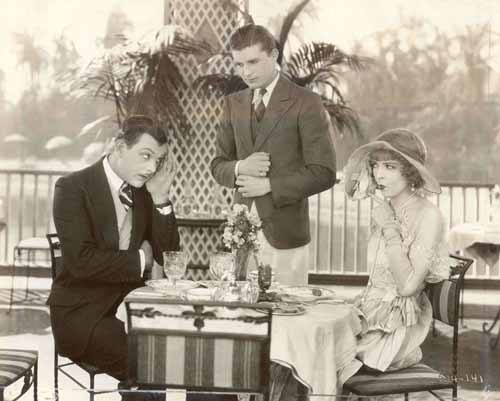 Colleen Moore had gone on strike in May 1927, after her husband, producer John McCormick, was fired from First National. (Initially a film distribution entity, First National became one of the major studios of the mid-to-late 1920s; in late 1928, it was gobbled up by Warner Bros.) The studio had decided to sever ties with McCormick, its Head of West Coast Productions and the producer of Moore’s films, because of his uncontrollable drinking.

In response to this, Moore canceled plans to star in Smiling Irish Eyes, which was to have been her “comedy constructor” Mervyn LeRoy’s first job as a director. (A fully revamped Smiling Irish Eyes – directed by William A. Seiter – would be made as a talkie in 1929.)

After making sure LeRoy got another directorial assignment right away, Moore walked out on her contract. It was around that time that she called First National’s top executives in New York City, telling them “This is Mrs. John McCormick.” (Any similarity to the “This is Mrs. Norman Maine” line at the end of A Star Is Born is no mere coincidence.)

The actress was apparently prepared to give up her career rather than her husband. Despite McCormick’s serious – at times dangerous – drunken bouts, the Catholic Moore felt she couldn’t divorce him. Additionally, McCormick “had great picture sense as far as her pictures were concerned,” Joe said. “Not only to come up with picture ideas, but also how to package her worldwide and to sell her as a superstar, whether in America, or in Argentina, or Uruguay, or China. [As] the producer, he called the shots.”

Moore’s role model was actress Marguerite Clark – Mary Pickford’s biggest rival in the 1910s. While still a major star, Clark had left the screen to become a housewife. Moore wanted to do the same. Her plan, in fact, was to quit Hollywood in 1927 – after a mere four (highly profitable) years of stardom. She wanted to raise a family, and then travel to places like Brazil and Africa.

However, in those days Moore was not only a star but a superstar – film exhibitors would vote her the top box office attraction of 1927. Unsurprisingly, First National relented. Retirement, family, Brazil, and Africa would have to wait.

Her Wild Oat was Moore’s first vehicle upon her return to the fold. “If [Her Wild Oat] looks a little short to you,” Joe remarked, “just remember … after [the studio and Moore] worked their contract problems out, they threw her right into this project.” Her Wild Oat was a programmer – a sort of filler that would keep an expensive star busy while another big project was being developed.

“It has her top-notch group in terms of her usual people,” Joe says. “George J. Folsey was her usual cameraman. George Marion, Jr., did the rather slangy titles.” (According to Joe, Marion was so important that his name would appear on the marquees of certain theaters, i.e., “Colleen Moore in XYZ. With titles by George Marion, Jr.”)

Gerald Duffy did the adaptation, and was given co-billing in the credits. “But it was really George F. Marion Jr., who did the titles,” Joe affirms.

Marshall Neilan was hired to direct Her Wild Oat after Moore arranged a three-picture deal for him (at $50,000 per picture) at First National. She’d worked with Neilan in two films in the early 1920s, and it was on a double date with the director that she met McCormick. (The couple were married in 1923.) 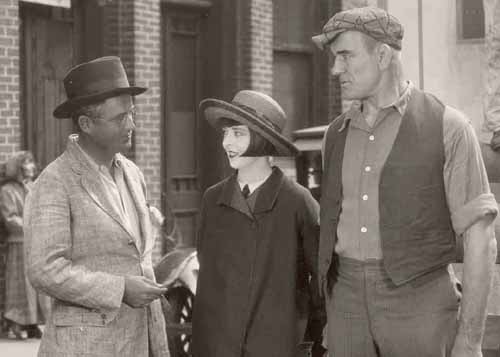 By the late 1920s, Neilan (above, left) was considered a difficult director who was past his prime. He had handled several successful Mary Pickford vehicles in the 1910s (plus the dull 1924 period drama Dorothy Vernon of Haddon Hall), but booze and his penchant for antagonizing top studio executives had taken a heavy toll on his career. Jokes such as “an empty taxi cab stopped at the Metro-Goldwyn studio, and Louis B. Mayer came out,” or “I hear that they’re sending in censors from the East. They’re investigating everyone from A to [Famous Players-Laskyboss Adolph] Zukor” didn’t exactly make him a favorite among Hollywood’s moguls. Indeed, Neilan had just gone into bankruptcy with his own studio.

Her Wild Oat was thus Neilan’s chance to restore his reputation within the industry. (That succeeded for a little while, for Neilan was to hit the skids again at the end of the decade.)

As for leading man Larry Kent, whose only requirement in Her Wild Oat is to look as handsome as possible, Joe didn’t know much. He recalled that Kent had a good role in John Ford’s 1928 drama Hangman’s House, and that David Rollins, who played youthful leads and second leads in the late 1920s, told him that Kent “was a regular at [German film director] F.W. Murnau’s Sunday soirees.” Besides Rollins and Kent, other regular soiree guests at Murnau’s were George O’Brien, who starred for the director in Sunrise, and MGM star Ramon Novarro. (According to the IMDb, by the mid-1930s Kent was playing uncredited bit parts and continued to sporadically do so until the mid-1960s.) 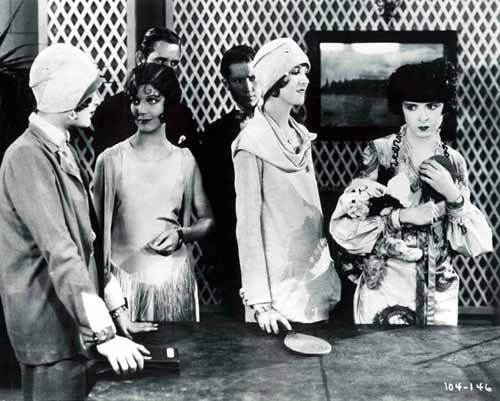 Now, a curiosity: After the screening of Her Wild Oat was over, I asked around if people had noticed 14-year-old Loretta Young (above, second from left) in a bit role. No one had – even though she could easily be spotted in the scene where Moore’s working gal (above, right) tries to mingle with some snotty high-society types playing table tennis at a fancy resort hotel.

Young’s acting career had begun in earnest when the assistant director of another 1927 Colleen Moore vehicle, Naughty But Nice, called Sally Blane for a small role. Since Blane wasn’t home, her sister Gretchen answered the call, lied about her age, and got the part.

“She was the most beautiful adolescent I had ever seen,” Moore later told Joe. The studio, however, felt that protruding teeth were anything but beautiful, so Moore herself paid to have braces made for Young, who went on to become an important First National/WB leading lady. (Moore also credited herself for turning Gretchen Young into Loretta Young. “Loretta” was inspired by the name of Moore’s favorite doll.)

But free braces or not, the young Loretta’s focus was on someone other than Colleen Moore during filming. On the same soundstage (such arrangements were possible during the silent era), Corinne Griffith, known as “The Orchid Lady,” was working on a film.

“I know she got me a contract, she got me my name, she paid to get my teeth fixed, but I wasn’t really interested in Colleen Moore as an actress,” Young later told Joe. “Corinne Griffith was the one I was observing. I was studying how Corinne Griffith carried herself, walked, how she wore her clothes, while imagining myself five years hence – that I would be like Corinne Griffith.”

After finishing principal photography on Her Wild Oat, Moore took off on her own while John McCormick remained in Hollywood.” Colleen needed a rest,” Joe explained. “She’d lost lots of weight when they’d gone officially on strike … [First National had] sued her for a million dollars. [During that time,] she lost 20 pounds; she was a nervous wreck, she couldn’t sleep. Her parents insisted that she take a vacation [once filming was over]. They chartered a yacht with a schooner, and she, her parents, her brother … went [sailing] for three weeks. When they came back [they learned that] McCormick was drunk the whole time they were gone.”

Worse yet, McCormick, as the film’s producer, had demanded to recut Her Wild Oat. While Moore was away, he ended up cutting off the cap of nearly every gag, so that the story made no sense. Luckily, the film’s editor, Alexander Hall (the future director of Here Comes Mr. Jordan and My Sister Eileen), made sure that McCormick did a dupe of everything that was cut.

Using the dupe footage, Hall, Moore, and Neilan worked together to restore Her Wild Oat to its original form. Joe affirms that they’re responsible for the final seven-reel version of the film, which was completed while McCormick went into a sanatarium.

Mordaunt Hall in the New York Times wasn’t impressed: “Her Wild Oat, Colleen Moore’s latest comic strip of film … can be said to be packed with incidents, some good, some unnecessary and others quite tedious. There are far too many scenes in this picture and consequently a lot of superfluous action.”

Time‘s review consisted of a brief description of the Colleen Moore formula: “Her Wild Oat. She runs a lunch counter. He is rich and romantic. He goes to Plymouth Beach. She follows him, wearing a wig and acting like a gold-digger’s idea of a grande dame. He meets but does not recognize her …”

Good or bad, formulaic or innovative, exciting or tedious, what truly mattered to me while watching this fluffy comedy – one of Colleen Moore’s rare surviving flapper films – was that I was watching it at all. A long-lost example of our cultural heritage, Her Wild Oat is now available for viewing (even if in limited engagements). One doesn’t have to be a silent film fan to appreciate the importance of this discovery.

Her Wild Oat will be screened next on Sat., May 5, 2007, at the University of Wisconsin Cinematheque.

Does anyone know where David Rollins is Buried at?