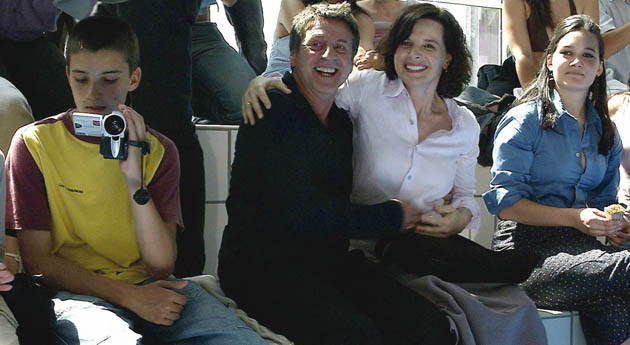 Michael Haneke’s thoughtful, gripping Caché / Hidden stars Juliette Binoche and Daniel Auteuil as a bourgeois French couple whose complacent lives are turned upside down when they start receiving anonymous videotapes showing the outside of their home. Those are later accompanied by bizarre, violent drawings. The solution may – or may not – be found in the past of both the father/husband and France itself.

Michael Haneke’s screenplay has an intriguing premise, but Haneke – both as screenwriter and director – seems less interested in coming up with a solution to the mystery (much like Michelangelo Antonioni’s L’Avventura and Blow-Up) than in depicting the inner angst of his middle-class European characters, holding it as a dark mirror to the current sociopolitical climate.

The cast is uniformly good, despite the fact that I still haven’t fully warmed up to almost invariably detached Daniel Auteuil. Special mention goes to both Juliette Binoche and veteran Annie Girardot, as Auteuil’s invalid mother.

Instead of providing a simple answer to the mystery, the much discussed final scene raises even more questions – as, I’m sure, was Haneke’s intention.

Warning: There are two horrifically violent scenes in the film, one of which – I hope that’s either CGI or some sort of magical editing job – involves an animal.

Reviewed at the AFI FEST.