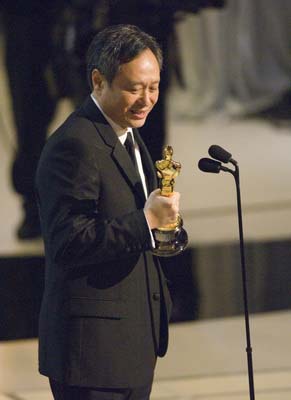 This year, I decided to watch the Oscars so I could write a little something about it. I was expecting to be bored to tears by my self-imposed assignment, but thanks in large part to Jon Stewart’s comedy skills (including the hilarious “Don’t Vote for Them, Vote for Me” ads created by his team) and to the crop of mostly interesting (if flawed) films I did enjoy the experience – somewhat.

Despite lapses such as Ben Stiller’s embarrassing turn in what looked like a Kermit the Frog suit while presenting the visual effects awards, an unfunny Tom Hanks sketch about keeping speeches short, a poor montage showing epic films and another even poorer showing supposedly socially conscious films, the Academy’s continuous disregard for the best foreign-language film category (no clips from the nominated foreign films were shown), and the ugly dismissal of best original screenplay co-winner Bobby Moresco, who wasn’t allowed to say his “thank yous,” the ceremony proceeded at a reasonably steady pace.

Oscarcast highlights included Meryl Streep and Lily Tomlin’s delightful improv-style banter while introducing honorary Oscar winner Robert Altman (though Altman’s surprisingly conventional speech was a letdown), the film noir montage introduced by Lauren Bacall (who should have brought her teleprompter reading glasses**), and George Clooney’s witty acceptance speech (which ended with the statement “I’m proud to be out of touch” – with the narrow-minded, intolerant self-proclaimed “mainstream,” that is).

Now, I must admit that I was – sadly – dead wrong about one thing. I was expecting the ceremony to offer no major surprises, but there were a couple: The song “It’s Hard Out Here for a Pimp” from Hustle & Flow beat Dolly Parton’s “Travelin’ Thru” from Transamerica.

And of course, the Crash Best Film win was both a major surprise and a major disappointment. (Presenter Jack Nicholson looked as surprised – and as disappointed – as myself.) Crash, a contrived and overblown look at racial relations in Los Angeles (where I live), was the one film I didn’t want to win.

The Paradise Now loss was another disappointment, but considering the more conservative members who tend to vote for the best foreign-language film award, it shouldn’t be at all surprising that the well-made but sentimental Tsotsi – involving a thug and a baby, no less – won in that category.

As for the Crash win, the Academy clearly opted not to make history – Brokeback Mountain would have become the first film about a homosexual relationship to win an Oscar for best film. One could accuse the Academy of being anti-gay, but if that were the case Ang Lee and screenwriters Diana Ossana and Larry McMurtry wouldn’t have won the Best Director and Best Adapted Screenplay awards. I’d say it’s more likely that many Academy members felt that Crash should be honored on a par with Brokeback Mountain. Thus, the splitting of the two top awards.

Also, before bandying about the word “homophobia” – not that there aren’t anti-gay Academy bigots – one should remember that Crash is about a (however preposterous) day in the life of Los Angeles, where most of the Academy members reside. Like the Sandra Bullock character in that film, those wealthy Academy voters have surely had problems with their Hispanic maids.

My point: Academy members can much more readily relate to several of the Crash characters than to the two Wyoming sheepherders of Brokeback Mountain. (Ask an Academy member to point to Wyoming on a map, and s/he’ll probably stick their finger up Ontario, Canada; ask another what a ewe is, and s/he’ll tell you it’s an expression of disgust.)

Oscar history of the Brokeback Mountain sort will have to be made some other year. But not to worry, that time will come. Not that it ultimately matters. After all, the Academy is hardly known for its trend-setting record.

And in case you’re wondering … Will I be watching the Oscars again any time soon? Hell, NO.

** Mar. 10 addendum: I received a note explaining that during rehearsals Lauren Bacall had flawlessly read the teleprompter text about Hollywood’s film noirs. However, during the Oscarcast the prompter ran too fast and lost the 81-year-old actress. According to one report from backstage at the Kodak Theater, Bacall was so heartbroken by the mishap that she was in tears.

“What you didn’t see [at the Academy Awards]: Backstage workers gasp as Crash wins over favorite Brokeback Mountain. When presenter Jack Nicholson is asked if he is surprised by the win, he says, ‘I didn’t expect it because you heard so much about Brokeback,’ before confiding, ‘and that’s who I voted for.’” From “The Academy Awards show you never saw” on USA Today.

Scientific and Engineering Award:
David Baraff; Michael Kass; Andy Witkin
for their pioneering work in physically-based computer-generated techniques used to simulate realistic cloth in motion pictures.
Garrett Brown
for the original concept of the Skycam flying camera system – the first use of 3D volumetric cable technology for motion picture cinematography.
Laurie Frost; Peter Hannan; Richard Loncraine
for the development of the remote camera head known as the Hot-Head.
David Grober; Scott Lewallen
for the concept and mechanical design (Grober) and for the electronic and software design (Lewallen) of the Perfect Horizon camera stabilization head.
Anatoliy Kokush
for the concept and development of the Cascade series of motion picture cranes.
Anatoliy Kokush; Yuriy Popovsky; Oleksiy Zolotarov
for the concept and development of the Russian Arm gyro-stabilized camera crane and the Flight Head.

The Next Three Days Movie Box Office: One of Worst Russell Crowe Bombs

Glad someone agrees with me. . .

As for the Independent Spirit Awards, (perhaps fortunately) I missed them. Maybe next year. Maybe.

I really agree with your comments about the Oscar Ceremony. Congratulations for you vie. And I ask you to please no stop watching these shows, your comments always will be very welcomed.
Also, if you thought that about the Oscars. You don’t imagine the horrible Ceremony show of the FIND’S Independent Spirit Award. That was shameless. Playing with the concept of “being edgy” , that show made me lost 2 hours of my life. Bad host: Sarah Silverman, who thinks that saying repeatdly he f… word is being cool. And a repetition of the last 3 years, kareokee style nominated film introductions…was real sad. Independent filmmakers are VERY creative with the resources they have. They deserve a better show. A real creative ceremony…not based in being “edgy”…