As the title implies, BearManor Media’s The History of Independent Cinema covers the century-long development of – American – filmmaking outside the big-studio lots.

Now, who were those independents?

Well, as author and film critic Phil Hall explains, they range from those fleeing the Thomas Edison East Coast oligopoly back in the early 1900s all the way to John Cameron Mitchell in the early 21st century.

Talk about an eclectic bunch. Eclectic and highly influential. As Hall explains, independent filmmakers helped to propel American cinema forward for the very simple fact that they could afford to take risks – generally speaking, they had less at stake from a financial standpoint than the more conservative big studios.

Otto Preminger, for one, helped to bring down both the Production Code (when he released the 1953 sex comedy The Moon Is Blue, above, with Maggie McNamara and William Holden) and the McCarthy era blacklist (when he hired one of the Hollywood Ten, Dalton Trumbo, to write the screenplay for Exodus in 1960).

Jules Dassin, for his part, became one of the American pioneers of “realistic” filmmaking when he took his cameras to the streets of New York to shoot The Naked City, a Mark Hellinger production distributed by Universal in 1948.

At the moment, the outlook may seem bleak for independent American films, but that’s not the first such instance. Hard economic times come and go, but those determined independent filmmakers have been with us since the dawn of motion pictures. And they’ll most likely be around for as long as there are people making movies.

Phil Hall, a steady contributor to Film Threat (check out his “The Bootleg Files” column), a former member of the Governing Committee of the Online Film Critics Society, and the author of The Encyclopedia of Underground Movies and Independent Film Distribution, has kindly agreed to answer a few questions (via email) about The History of Independent Cinema for Alt Film Guide. Read on… 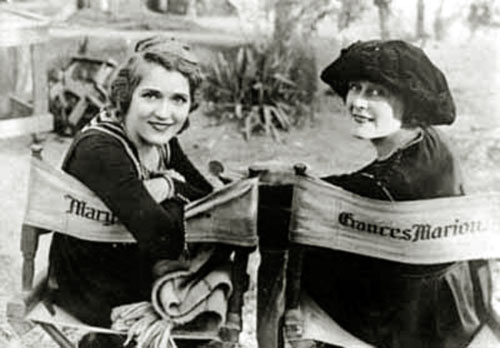 Mary Pickford, one of the first major independent producers, and screenwriter Frances Marion

The History of Independent Cinema. I’m assuming that refers to US-made films. Even so, that’s a lot of ground to cover. What sort of parameters did you have to use in order to condense that very long and very diverse history into one volume?

Clearly, I could not accommodate every independent film into the book. I decided to focus primarily on films and creative artists that made a significant contribution to the commercial and/or artistic development of film production and distribution. That helped to eliminate many obscure films and filmmakers from coverage.

There are two genres that were not pursued in depth. I opted not to include the history of the pornographic film industry – although those films are, technically, independent productions, they are literally a world unto themselves and better deserving of their own full-length book history. I also intentionally paid scant attention to the exploitation films of the 1930s to 1950s. These films, with no exception, have zero artistic value and they are only viewed today as a source of unintentional humor. Even the best of that bunch, Reefer Madness, is a terrible movie. I acknowledge their existence and advise the reader to proceed with extreme caution when coming to visit them.

As a follow-up to question #1. How would you define “independent cinema”?

An independent film is a motion picture that is produced outside of the Hollywood studio system.

Some may wonder about Jane Russell in The Outlaw on your book cover. Howard Hughes an independent producer? What about David O. Selznick? Samuel Goldwyn? Mary Pickford and Douglas Fairbanks?

[Right, Jennifer Jones in Selznick’s independently made and distributed 1946 blockbuster Duel in the Sun.]

As for Jane Russell on the book cover – well, we needed something to make the book stand out, and she does attract attention!

How did United Artists – until the early ’80s a major distributor for independent talent – fit into the history of independent American cinema?

First, it broke new ground by enabling its four founding independent producers (Mary Pickford, Douglas Fairbanks, Charles Chaplin and D.W. Griffith) to have complete control over the distribution of their films.

Second, it provided other independent producers with the ability to gain national distribution in prestigious venues. All of the major independent producers of the 1920s through 1950s, at one time or another, released their films through United Artists. In fact, the first independent film production to win the Best Picture Oscar was David O. Selznick’s [UA release] Rebecca in 1940. [Gone with the Wind, though also produced by Selznick, had MGM financing and distribution.]

When did independent cinema as we generally define it today – small-budgeted, character-driven, thematically off-beat – take off?

It was always there. One could argue the so-called “race films” – all-black films produced exclusively for racially segregated audiences in the Jim Crow period – were setting that example beginning in the early 1920s, when Oscar Micheaux [right] was producing and directing films such as Within Our Gates.

After World War II, however, these films began to slowly trickle into the mainstream, finding favor with critics and audiences. Louisiana Story, The Quiet One, and Little Fugitive were among the first round of indie films that found equal footing with the big-budget flicks.

Either aesthetically or thematically, have independent films always been “different” or more daring than big-studio films? Now, would you call 21st-century indies “different” or “daring”?

Traditionally, the indie film genre was always willing to attack the status quo. It is because of indie film that we have color, sound, widescreen projection and videography in mainstream films. Indie films broke Hollywood’s self-censorship on a wide variety of subject matters. Indie films tore apart the McCarthy-era blacklist. Indie films gave a wide range of behind-the-camera responsibilities and opportunities to women and African Americans. None of this came from the studios.

Today’s indie films, from what I am seeing, are significantly less daring and different. This is not a surprise, considering that filmmaking and film distribution is an increasingly expensive activity and there is less room to be experimental today due to the needs of a rapid return on investment. Hopefully, as the economic picture improves, the indie filmmakers can shock us anew.

What have been the top foreign influences on American independent filmmaking?

The Cabinet of Dr. Caligari and the European avant-garde films of the 1920s were a huge influence on U.S. underground filmmakers. The Italian neo-realism in the post-World War II era had a strong impact, primarily because it enabled filmmakers to adopt an obvious low-budget approach – with the caveat that the film was appropriately gritty enough to warrant the glamour-free style.

The 1962 Italian feature Mondo Cane helped to inaugurate the shockumentary filmmaking school that is still with us. More recently, the Dogme school of filmmaking had a flurry of followers on this side of the Atlantic.

Many complain about the low quality of the current crop of American independent productions. Do you find that a fair assessment?

Like I always say: I see an awful lot of films and a lot of awful films. The problem is quality control, since today’s independent filmmaker is usually both the producer and the director (and the screenwriter, for that matter). The indie films of the Hughes-Selznick-Goldwyn era were excellent because the producers maintained quality control. The director could frame the shots and determine where to place the camera, but the producer was on top of the endless details that go into creating a film. Today, most indie films lack that oversight feature. Thus, there is no one to raise a red flag over a problematic performance or deficient script.

For the indie director who is not doing double-duty as the producer, there is also the culture that beatifies directors. This is a mistake, since this enables many directors to become sloppy and self-indulgent with their work. That may explain why so many indie films feel like home movies on steroids.

Sundance, SXSW, Slamdance, Los Angeles Film Festival, or … ? In your view, which festival showcases the best selection of independent films?

None. Film festivals are not about showcasing quality motion pictures. They are about making money for their organizers, usually with titles that will bring in a large audience. The major festivals – Sundance, SXSW, even Slamdance – go for star power, because that is what sells tickets. The genuine no-name, no-budget, no-connection indies inevitably wind up in second- or third-tier festivals. Even if these films have peerless quality, they won’t get into the major festivals unless they have connections to the festival organizers or major names attached to the project.

In the last couple of years, there have been many downbeat predictions regarding the future of American independent cinema. What’s your take on that?

A glut of films coupled with fewer places to present them equals trouble. The good news is that direct-to-DVD is no longer seen as an ignoble fate, so many of these films are finding some kind of release. The bad news is that many of these films are stuck in obscurity – major media ignores them and major DVD retailers don’t stock them. Until there are more venues for showing these films, I don’t see how the picture can improve.

And finally, any other book projects in the works?

I have a new book in the works that speculates on what would’ve become of famous Hollywood stars if they had not died prematurely – spanning from Rudolph Valentino to Natasha Richardson, with all points in between. That will be out in late 2010.

I was Rouben Mamoulian’s amanuensis in the late 1970s. He directed Becky Sharp and was very proud of that film.