Teresa Wright in ‘Shadow of a Doubt’: Alfred Hitchcock heroine in the director’s favorite film

(See preceding article: “Teresa Wright: Actress Made Oscar History.”) After scoring with The Little Foxes, Mrs. Miniver, and The Pride of the Yankees, Teresa Wright was loaned to Universal – once initial choices Joan Fontaine and Olivia de Havilland became unavailable – to play the girl-next-door heroine in Alfred Hitchcock’s Shadow of a Doubt. (Check out video below: Teresa Wright reminisces about the making of Shadow of a Doubt.)

Co-written by Hitchcock’s wife, Alma Reville; Meet Me in St. Louis and Junior Miss author Sally Benson; and Thornton Wilder, whose Our Town had provided Wright with her first professional stage gig and who had suggested her to Hitchcock, Shadow of a Doubt was based on “Uncle Charlie,” a story outline by Gordon McDonell – itself based on actual events.

Apart from its (deceptively) idyllic portrait of family ties and American small-town life, this subversive mystery-drama had little in common with the milieu found in Our Town and Meet Me in St. Louis.

Billed above her co-star and Citizen Kane alumnus (Cotten was cast in place of original possibilities Cary Grant and William Powell), Wright gives a memorable performance as another “innocent” who, before the final credits, discovers the shadowy side of life. Like Alexandra Giddens, the second Mrs. Miniver, and Eleanor Gehrig, the slight-looking Young Charlie also gets to display unbending inner strength, even risking her life to confront her psychopathic blood-relative.

‘Shadow of a Doubt’ naysayers

Shadow of a Doubt has a strong following today, but some critics weren’t all that impressed upon its release. The New York Times’ Bosley Crowther, for one, complained that after an appropriately creepy beginning, “the story takes a decidedly anticlimactic dip and becomes just a competent exercise in keeping a tightrope taut. It also becomes a bit too specious in making a moralistic show of the warmth of an American community toward an unsuspected rascal in its midst.”[1]

The film did, however, receive an Oscar nomination for Best Original Story for Gordon McDonell. It also reportedly earned a profit for Universal, though that was likely because it was made on a modest budget (approximately $800,000).[2]

Hitchcock himself would later call Shadow of a Doubt his personal favorite among his films and Teresa Wright one of the most intelligent performers he had ever worked with. Wright, in fact, deserved a Best Actress Oscar nomination that year, but was bypassed by the Academy.[3]

Decades later she would refer to Shadow of a Doubt as a “very happy experience.” See below.

Below: Teresa Wright reminisces about the making of ‘Shadow of a Doubt.’

No ‘looking insinuatingly’ at a Thanksgiving turkey

“Teresa Wright looked very lovely and was very shy,” noted writer-producer-diarist Charles Brackett (The Lost Weekend, The King and I), in reference to a July 1944 dinner party at Samuel Goldwyn’s house. Yet much like her film characters, in real life Wright could be quite a bit more determined than her “lovely” and “shy” appearance led one to believe.[4]

She asserted that her only salable asset was her talent and fought Goldwyn for better roles and for less intrusion in her private affairs.

In its May 1942 edition, Colliers magazine featured what was purportedly a contract clause stipulating that she would never have to pose for cheesecake pictures to promote either herself or her films.

“The aforementioned Teresa Wright shall not be required to pose for photographs in a bathing suit unless she is in the water. Neither may she be photographed on the beach with her hair flying in the wind. Nor may she pose in any of the following situations: In shorts, playing with a cocker spaniel; digging in a garden; whipping up a meal; attired in firecrackers and holding skyrockets for the Fourth of July; looking insinuatingly at a turkey for Thanksgiving…”[5]

Considering her next movie role, maybe she should have posed for photographs looking dangerously at a turkey-carving knife. 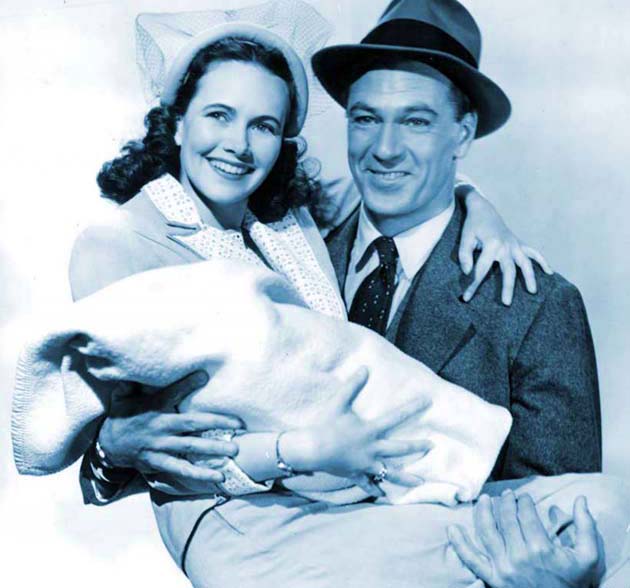 In the mid-’40s, the best that Goldwyn could come up with for his Oscar-winning contract player was to loan her out to star opposite Gary Cooper in the hackneyed “family” comedy Casanova Brown (1944). Directed by Sam Wood, the film was slated to be the first production of the newly formed indie International Pictures.[6]

Casanova Brown, however, features none of the wit and charm of Leo McCarey’s 1937 classic. Even though Wright was reunited with her The Pride of the Yankees leading man and director, there were no major sparks this time around.

Following this RKO release, more than two years would pass before Teresa Wright returned to the screen – in what would be not only the apex of her career but also one of the biggest box office hits of the 20th century.

“Teresa Wright and Shadow of a Doubt: Hitchcock Heroine” follow-up post: “Mammoth Blockbuster Was Career Highlight: Teresa Wright in The Best Years of Our Lives.”

[1] Writing for the British publication Sequence 9, in 1949 critic and filmmaker Lindsay Anderson (This Sporting Life, If….) complained that although Shadow of a Doubt and Alfred Hitchcock’s other Hollywood films featured sequences that “outstrip anything in his earlier [British] pictures for virtuosity and excitement,” they lacked “the wholeness of their predecessors.”

The other Hitchcock movies specifically mentioned in Anderson’s piece were:

In January 1944, Shadow of a Doubt would be adapted for Cecil B. DeMille’s Lux Radio Theater, with Teresa Wright reprising her film role and, as Uncle Charlie, The Thin Man franchise star William Powell – one of Hitchcock’s original choices for the part.

Joseph Cotten was featured in three other radio versions, playing opposite Deanna Durbin, Vanessa Brown, and June Vincent. In the early ’50s, Betsy Drake and Cary Grant – Hitchcock’s other original possibility for Uncle Charlie – took on the leads.

There would also be two made-for-television Shadow of a Doubt adaptations: a 1955 Lux Video Theatre production directed by Richard Goode and starring Barbara Rush and Frank Lovejoy; and a 1991 movie directed by Karen Arthur and toplining Mark Harmon and Margaret Welsh. (In addition to The Birds and Marnie star Tippi Hedren in a supporting role.)

A low-budget 1958 big-screen remake was titled Step Down to Terror (1958). Directed by Harry Keller, it featured Colleen Miller in the old Teresa Wright role and Charles Drake as the killer; plus Rod Taylor, Josephine Hutchinson, and Jocelyn Brando.

Also unrelated is Brian Dennehy’s 1995 made-for-TV Shadow of a Doubt, starring Dennehy and Bonnie Bedelia. It was based on a novel by William J. Coughlin.

At Deep Focus Review, Brian Eggert provides an in-depth analysis of the making of Shadow of a Doubt.

[3] Teresa Wright failed to get a 1943 Best Actress nomination for Shadow of a Doubt. Shortlisted that year were:

As mentioned in the main text, Fontaine, who had previously starred in Alfred Hitchcock’s Rebecca (1940) and Suspicion (1941), had been initially offered Wright’s Shadow of a Doubt role.

[4] Charles Brackett was Billy Wilder’s screenwriting partner and, from The Lost Weekend (1945) to Sunset Blvd. (1950), the producer of their films. From 1951 to 1962, Brackett was a screenwriter-producer at 20th Century Fox (Titanic, Niagara, Journey to the Center of the Earth).

Dated July 28, 1944, his diary entry is found in It’s the Pictures That Got Small: Charles Brackett on Billy Wilder and Hollywood’s Golden Age, edited by Anthony Slide.

Besides Brackett and his wife, and a pregnant Teresa Wright, also present at Samuel Goldwyn’s dinner party were:

Thanksgiving turkey part of the game

[5] “My idea then was that I wouldn’t look good, that my acting was better than my figure, and that others could [pose for cheesecake pictures] better,” Teresa Wright would tell gossip columnist Hedda Hopper in 1950.

Even so, it’s impossible to believe that the dictatorial Samuel Goldwyn – who would unceremoniously fire Wright for being “uncooperative” in 1948 – would agree to such an absurdly detailed clause without having his p.r. people working overtime to sell his 23-year-old newcomer as an Actress (capital “A”) unlike any other.

In other words, if the “no looking insinuatingly at a turkey for Thanksgiving” clause was indeed part of Wright’s contract with Goldwyn, it was also part of the game.

Also, Teresa Wright may have been against posing for cheesecake pictures, but serious actress or no, she didn’t mind posing for ads such as those for Camel cigarettes and Jergens lotion.

[7] Floyd Dell and Thomas Mitchell’s play had previously been the basis for two Universal releases: