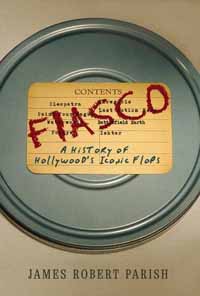 “In selecting the 15 Hollywood box office catastrophes presented within this volume, I was guided by several factors. First of all, I wanted to present the backstories of prodigiously expensive movies whose tortuous paths from start to finish and subsequent infamy were especially representative of the Hollywood system at the time of production. From among many likely entries I picked extremely colorful and contrasting candidates that well demonstrate how the combination of ill-matched personalities and tangled situations can result in chaos during the making of a must-succeed, extremely costly Hollywood feature. In each instance I sought to pick the most vivid example that explored the big question, ‘”How in the hell did this picture ever get made?”

That’s author James Robert Parish – a personal friend – in the introduction to his latest tome, Fiasco : A History of Hollywood’s Iconic Flops (Wiley, 2005). Among the mega-bombs dissected in the book are the 1963 version of Cleopatra, the 1986 Madonna-Sean Penn disaster Shanghai Surprise and Peter Chelsom’s 2001 comedy Town & Country, starring Warren Beatty, Diane Keaton, and Goldie Hawn, among others.

Jim has kindly agreed to answer (via e-mail) a few questions about his latest book. See below.

Of all the elements you discuss in your book Fiasco: A History of Hollywood’s Iconic Flops, which one would you say is the most important for the creation of a monumental screen failure?

Parish: The studio/producing company’s inability to realize that the elements on a film project are not coming together properly and that it would be better to stop (even at an advanced stage of production) than to proceed. However, it is frequently the case that no one wants to halt the disaster in the making, believing that somehow it will all miraculously pull together. Also, few people want to be the bearer of bad news by saying this project should stop. Moreover, too many decision makers have a vested interest in seeing that the picture – no matter how badly it is shaping up – proceeds to completion/release. Their fee for the project is at stake and/or they don’t want to admit they made a mistake in the first place. Then too, often a project has been put in the works by a prior regime and the new regime is too busy establishing its own turf to “bother” with past executives’ greenlit projects.

Why would you say that producers, directors, and actors don’t learn from past mistakes? Kevin Costner, for instance, has two cinematic disasters listed in Fiasco: Waterworld and The Postman.

Parish: In the case of Waterworld and The Postman, negotiations for the latter picture had begun before the former picture went into production and had its shock wave of artistic/financial problems. Before Waterworld Costner was a VERY hot commodity in Hollywood and, thanks to both Dances with Wolves and The Bodyguard had the reputation for being able to turn a questionable project into a big box office hit. As to filmmakers learning from past mistakes, I equate the situation to a romantic endeavor. Each time out at the starting gate it is assumed optimistically that “this” time everything will work well, no matter what past experience should tell one about the possible downsides.

Your book covers major flops from 1960 to the early 21st century. Any major fiascoes from previous decades you’d care to mention?

Parish: Hollywood in the pre-1960s often had problems with (big-budget) historical pictures going over with the public, such as D.W. Griffith’s Abraham Lincoln (1930), the Clark Gable-MGM failure, Parnell (1937), or 20th Century Fox’s Wilson (1944).

What about certain movies that also have big egos, big fights, big problems, and big budgets, but that somehow manage to find an audience – and sometimes even critical favor? Titanic, for instance. How could such a monumental fiasco in the making become a monumental hit?

Parish: One has to take into account (1) the media’s perception and reaction to an important film in the making. Sometimes the press’ negative hype about the picture’s outcome is merely that – an impression not based on reality or the likelihood of possible success. As with brewing scandals that break in the media, the public (as well as the media) have a gut reaction to whether they are for or against the situation at hand. (For example, the public proved very forgiving of Hugh Grant for his indiscretion in a parked car in Los Angeles, especially after he apologized in a very human way on TV’s The Tonight Show. In contrast, there was growing antipathy towards Winona Ryder for her attitude/court appearances in her department store problems a few years ago). In the case of Titanic there was a lot of media cry and hue about the cost overruns on the picture, but too little said about where the money had gone to – especially in regard to the elaborate special effects and sets which gave the story added resonance.

If you were to write “Fiasco: The Sequel,” which catastrophic flops would you include?

Parish: Thankfully, Hollywood is always generous in providing new examples of box office turkeys (e.g. 2005’s Kingdom of Heaven), and there are such past films to consider as 1986’s Howard the Duck.