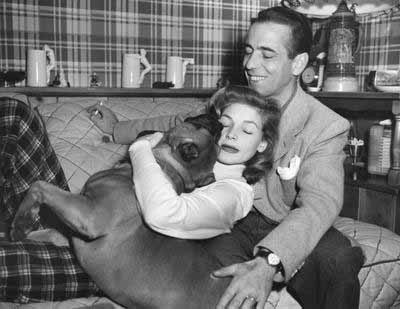 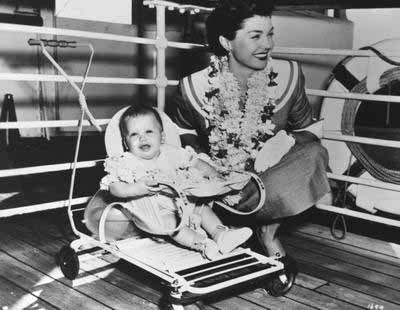 Rarely seen home movies from the personal collections of Alfred Hitchcock, Esther Williams (above), Steve McQueen, Lauren Bacall and Humphrey Bogart (top), and others will be screened at the Academy of Motion Picture Arts and Sciences’ presentation of “Hollywood Home Movies: Treasures from the Academy Film Archive.” The screenings will take place on Saturday, Aug. 11, at 7 p.m. at the Linwood Dunn Theater in the Academy’s Pickford Center for Motion Picture Study in Hollywood.

According to the Academy’s press release, “’Hollywood Home Movies’ will feature 16mm excerpts of at-home, on-vacation and behind-the-scenes set activities captured by stars and directors from Hollywood’s Golden Age.

“In addition, the program will present footage of Hollywood and its environs, reflecting the changing landscape of Southern California. It includes the construction of the Los Angeles City Hall in 1926, scenes of Hollywood Boulevard and the surrounding area from 1947, scenes from the Tournament of Roses Parade from 1930–1950 and Disneyland’s opening on July 17, 1955.”

“Hollywood Home Movies” is being presented in conjunction with Home Movie Day, described as “an annual international celebration of amateur films and filmmaking that provides individuals and families an opportunity to see and share their own home movies with an audience of their community.” The Linwood Dunn Theater will be the event’s venue in the Los Angeles area.

Individuals interested in having their home movies screened should check in at the Dunn Theater from 11 a.m. to 3 p.m. on Aug. 11. Screenings will take place from noon to 4 p.m. For information on Home Movie Day events in other cities, visit www.homemovieday.com. 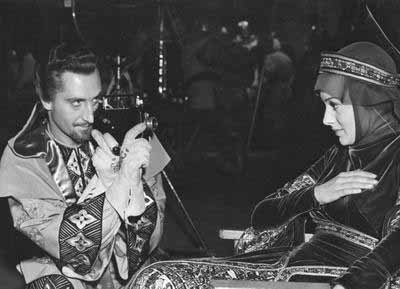 Tickets to “Hollywood Home Movies” are $5 for the general public and $3 for Academy members and students with a valid ID. They will be available beginning August 1 by mail or at the Academy box office during regular business hours. Tickets also may be purchased online at www.oscars.org/events. There are no minimum order requirements and no transaction or processing fees. Tickets may be purchased online until noon PDT on the day of the event. Doors open at 6:30 p.m. for the evening event. All seating is unreserved.

The Linwood Dunn Theater is located at 1313 Vine Street in Hollywood. Free parking is available through the entrance on Homewood Avenue. For additional information, call (310) 247-3600.

Leatrice Joy in gender-bending movie role: ‘The Clinging Vine’ at The Silent Society

Starring popular silent film actors Leatrice Joy and Tom Moore, The Clinging Vine will be the Los Angeles-based Silent Society’s next “Silents Under the Stars” presentation. Directed by Paul Sloane, this 1926 comedy-drama featuring Leatrice Joy in a gender-bending role will be screened at 7:30 p.m. Sunday, Aug. 29, at the Paramount Ranch – north of Mulholland Dr., in the Agoura Hills area of the San Fernando Valley.

In The Clinging Vine, Leatrice Joy plays a mannish woman who runs a business operation until she falls in love with the Big Boss’ grandson (Tom Moore). Joy’s is the sort of role that Rosalind Russell would often play in the 1940s: the desexualized, masculinized woman who discovers evening gowns and negligees after the Right Man comes into her life. Having said that, I should add that no Rosalind Russell character was ever nearly as androgynous as Leatrice Joy’s gender-bending businesswoman in The Clinging Vine. In fact, forget Russell. Think Hilary Swank in Boys Don’t Cry.

Written for the screen by Jack Jevne and Rex Taylor, from a play by Zelda Sears (who also happened to be a screenwriter at MGM) and with titles by John W. Krafft, The Clinging Vine is no masterpiece. But Leatrice Joy, who goes through much of the film wearing manly attire and sporting a butch haircut reminiscent of some modern-day lesbians, is quite funny when trying to act feminine. In one hilarious scene, she learns that in order to win a man she must flutter her eyelashes while saying, “Do go on!” and “Aren’t you wonderful?”

Though best remembered as one of MGM superstar John Gilbert’s wives, Leatrice Joy deserves to have her work as an actress rediscovered. The Clinging Vine would be a good introduction, especially considering that Joy played a few other times what I’ve described above as “gender-bending” characters.

The Clinging Vine will be presented with live musical accompaniment by Michael Mortilla. More information and directions on the Silent Society page.

Among the highlights – “pending final clearance” and “subject to change” – at Cinecon 43 are:

The recently discovered Her Wild Oat, a 1927 comedy starring Colleen Moore, one of the most popular film stars of the 1920s. Her Wild Oat is certainly not the greatest film – or the funniest comedy – ever made, but Moore is a delight in her usual role as the working-class girl who finds herself a prince charming with loads of cash. Also in the cast, Hallam Cooley, Larry Kent, and Gwen Lee – plus future Oscar winner Loretta Young in a bit part. (Young can be found in the ping-pong sequence.) Marshall Neilan directed.

The recently restored (by UCLA) Tillie’s Punctured Romance (1914), reportedly the first feature-length slapstick comedy ever made, stars Charles Chaplin, Mabel Normand, and future Oscar winner and box office sensation Marie Dressler. I’m not a Chaplin fan – in truth, I’m no fan of most “official” film comedians – but I’ve always enjoyed both Mabel Normand and Marie Dressler. Once again, not the funniest movie ever made, but a must for anyone interested in film history. Directed by Mack Sennett. (Addendum: Tillie’s Punctured Romance was pulled out of the schedule. It may be screened next year.)

(By “official” I mean people like Chaplin, Buster Keaton, Stan Laurel & Oliver Hardy, Harold Lloyd, W.C. Fields, the Marx Brothers, Jerry Lewis, Jim Carrey, etc., all of whom tend to put me to sleep. Generally speaking, I much prefer performers who, though not “comedians” per se, could be uproariously funny in comic roles; people like Irene Dunne, Jean Arthur, Cary Grant, Ann Sheridan, Gary Cooper, William Powell, Carole Lombard, Marilyn Monroe, Edna May Oliver, et al. Hey, I couldn’t not include Edna May Oliver in the latter list.)

In the 1935 sophisticated comedy The Gilded Lily (above), Claudette Colbert co-stars with frequent partner Fred MacMurray and a very young Ray Milland. In the film, Colbert plays a stenographer-turned-famous entertainer who must choose between two men. Why on Earth she’d even consider choosing between the usually charming Milland and the usually dull MacMurray is beyond me, but the little-seen The Gilded Lily does have a pretty solid reputation. Wesley Ruggles directed.

Only Yesterday is a 1933 romantic drama starring Margaret Sullavan and John Boles. Though officially based on Frederick Lewis Allen’s novel, the film owes a lot to Stefan Zweig’s Letter from an Unknown Woman. (Max Ophüls’ 1948 adaptation starring Joan Fontaine and Louis Jourdan remains one of the greatest romantic movies ever.) John M. Stahl directed.

A major rarity is the roadshow (i.e., complete) version of The Patent Leather Kid (top photo, 1927), directed by Alfred Santell, and starring Academy Award nominee Richard Barthelmess as an arrogant, selfish, petulant boxer – the PLK of the title – who, thanks to World War I and a round-faced girlfriend (Molly O’Day), learns all about love, duty, patriotism, and – best of all – God’s Greatness.

Adela Rogers St. Johns was credited for the screenplay, and I can easily see the worldly St. Johns peeing in her panties – from laughing – while writing the hokey characters and situations. Audiences gobbled it all up – much as they still do today. (Note: In the first year of the Academy Awards, Barthelmess was also nominated for The Noose. He lost to Emil Jannings, also for two movies: The Way of All Flesh and The Last Command.)

Man, Woman and Wife is an ultra-rare 1929 Universal drama. (Universal, ever concerned with the preservation of the arts and culture, junked most of its silents in the late 1940s.) The film stars Norman Kerry, Pauline Starke, Marion Nixon, and Kenneth Harlan, and is described as “part social drama, gangster picture, war story and prison drama all rolled up in one, with solid performances, beautiful photography by Ben Reynolds, ASC, and top-notch direction by Edward Laemmle.”

Also at Cinecon 43: The Showdown (1928), directed by Victor Schertzinger, and starring Evelyn Brent, George Bancroft, and Neil Hamilton; Girls Can Play (1937) – baseball, that is – with Jacqueline Wells (later rebaptized as Julie Bishop), and a very young Rita Hayworth; and the Jo Swerling-Norman Krasna-scripted Hollywood Speaks (1932), starring Pat O’Brien and the underrated Genevieve Tobin (as “Gertie Smith a.k.a. Greta Swan”).

And finally, the comic Western Trail of the Vigilantes (1940), which boasts an eclectic and unlikely cast (for a Western) that includes urban animals Franchot Tone, Broderick Crawford, and Warren William; Henry King’s The Devil’s Bait (left, 1915), starring serial superstar Ruth Roland and William Conklin; and How’s About it? (1943), a B-musical with the Andrews Sisters.

I couldn’t find a list of celebrities expected to attend this year’s Cinecon, but last year they had Coleen Gray, Tab Hunter, Delbert Mann, Marsha Hunt, Stella Stevens, Ann Savage, and about a dozen others.

Whether or not I – or anyone else, for that matter – like the films screened at Cinecon is all but irrelevant. What truly matters is that there are a group of people who are willing to spend time and effort to make these rarities available – virtual trips to worlds that no longer exist – even if only for one weekend a year in Hollywood.

And where else will you find (1930s child star) Sybil Jason autographing books?

Jack Oakie in The Great Dictator.

The Los Angeles Times has a lengthy article on the likely sale of Jack Oakie’s San Fernando Valley estate, Oakridge, which was bequeathed by Oakie’s widow, former actress Victoria Horne (Harvey), to the University of Southern California School of Cinematic Arts.

According to Bob Pool’s August 2007 article, the now decrepit and downsized Jack Oakie estate is “perhaps the last of the multi-acre ranches that stars from Hollywood’s golden era bought in what then was the outskirts of town [more specifically, Northridge].” Barbara Stanwyck had sold Oakie the property – including the house built by architect Paul Revere Williams – in 1940, when she moved into Robert Taylor’s ranch nearby. USC, for its part, will likely be selling it to a developer. And that means the end of Oakridge and of the “multi-acre ranches” owned by movie stars of the studio era.

Others who lived in the vicinity of the Jack Oakie estate were Zeppo Marx, William Holden, Janet Gaynor, Lucille Ball and Desi Arnaz, and studio mogul Harry Warner.

October 2013 update: Developers did buy Oakridge, but were unable to actually build on the property. Ultimately, the City of Los Angeles acquired the old Jack Oakie estate in mid-2010, planning to turn it into a public park and community event center while preserving Paul Williams’ house and the grounds surrounding it. Possibly due to the never-ending Great Recession, Oakridge seems to be still awaiting its planned restoration.

For those who aren’t familiar with Jack Oakie, he was a major Paramount comedy star in the early ’30s, though later in the decade he was demoted to leads or second leads in programmers and B movies.

His movie career underwent a brief resurgence after he was cast opposite Charles Chaplin in the 1940 comedy The Great Dictator – the year he bought Oakridge. For his (quite humorous) Benito Mussolini caricature in Chaplin’s Best Picture Academy Award nominee, Jack Oakie received a Best Supporting Actor nomination. He lost to three-time Oscar winner Walter Brennan for The Westerner.

Unfortunately, Jack Oakie’s early Paramount films (e.g., College Humor, Million Dollar Legs, Let’s Go Native, The Sap from Syracuse) are hard to come by, as Universal – the conglomerate cog that currently owns the old Paramount library – has been reluctant to make those films available, whether on DVD or on cable TV.