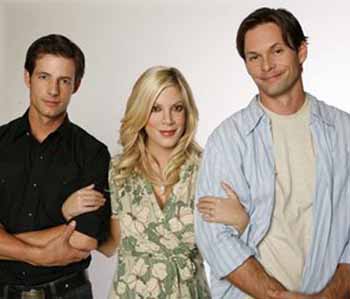 Robert Cary’s Save Me, the story of a substance-abusing gay man who attempts to be cured of both his addiction and his homosexuality, will open the 25th Outfest, the Los Angeles Gay & Lesbian Film Festival, which kicks off this evening at the Orpheum in downtown Los Angeles.

Eleven days and 235 features and shorts later – mostly at the Directors Guild in West Hollywood – the festival will come to a close with a screening of C. Jay Cox’s Kiss the Bride (top), the first film to emerge from Outfest’s screenwriting lab. Written by Ty Lieberman, this romantic comedy, which sounds like a gay variation of My Best Friend’s Wedding, stars James O’Shea as a young man about to marry Tori Spelling, when a former boyfriend (Phillip Kramer) reappears in his life to rescue him from a fate worse than death – heterosexual marriage.

Director C. Jay Cox, by the way, is the creator of Latter Days, a wildly uneven – but somehow quite affecting – love story involving a flaming party boy and a saintly Mormon missionary (how the poor guy suffers) that was very popular in the gay film festival circuit a few years ago.

Christianity and anti-gay bigotry, in fact, will be prominently featured at this year’s festival via the five-film series “Queers in Christ.”

“Each year I look for the major theme of the festival and this year, without a doubt, it was the intersection of religion and homosexuality – and more specifically the volatile intersection between Christianity and homosexuality,” David Courier, Outfest’s co-director of programming told the Los Angeles Times. “We received so many films that spoke to this theme.”

(In the Los Angeles Times, Lisa Rosen remarks that “in a sign of the slowly but surely changing times, Save Me has additional crowd appeal in that two of its leads, Allen and Gant, are openly gay – still a relative rarity for Hollywood actors.” I’m assuming that Rosen’s use of the word “relative” was a joke.)

Another special screening will be that of Bill Sherwood’s recently restored Parting Glances, the first such project conducted by the UCLA Film and Television Archive (website) in partnership with Outfest. Sherwood’s 1986 drama about two former lovers – one of whom is dying of AIDS – was much admired upon its release, and is now considered a classic of sorts. (Ever the contrarian, I was utterly unimpressed by the film.)

Also, director-writer Bill Condon will receive the 2007 Outfest Achievement Award, and three days later his Dreamgirls will be screened at the Ford Amphitheatre as this year’s Sing-Along event. I’ll definitely skip that one.

And finally, a festival highlight is sure to be Eytan Fox’s The Bubble (right), which was screened at the Toronto Film Festival last year. The Bubble – the term refers to Tel Aviv – follows the travails of two lovers, one Jewish, the other Palestinian. Ohad Knoller, one of the two soldier lovers in Fox’s touching Yossi and Jagger is one of the film’s leads.

Founded by volunteers on the UCLA campus in 1982, Outfest has grown to become one of the largest gay & lesbian film festivals in the world. Approximately 50,000 attendees are expected this year.

See below a list of the festival’s gala/special screenings and programs, taken from the Outfest press release:

Closing Night Gala Screening – “Kiss the Bride”
The Closing Night Gala will return to the Orpheum on July 23 at 8:00PM with the world premiere of the first film to be completed from the Outfest Screenwriting Lab. Written by and directed by “Latter Days” director C. Jay Cox’ “Kiss the Bride” is a hilarious comedy of past meets present, Matt (Phillip Kramer) learns that his old sweetheart Ryan (James O’Shea) is about to get married to Alex (Tori Spelling) and returns to rescue him.

Outfest Legacy Project Gala – “Parting Glances” (Restoration World Premiere)
The first feature film to be restored by the Outfest Legacy Project for LGBT Film Preservation—a collaboration between Outfest and the UCLA Film & Television Archive – is among the most beloved LGBTQ films of the last 25 years, “Parting Glances.” Bill Sherwood’s warm, moving debut had a big impact of the burgeoning indie film scene of the mid ’80’s. The 1986 film established itself in the hearts of gay moviegoers and launched the career of Steve Buscemi. After AIDS claimed Sherwood in 1990, “Parting Glances” faced the limbo and deterioration to which many queer, indie films are consigned, but the Outfest Legacy Project has created fresh 35mm prints from the original Super 16mm, restored the soundtrack, and saved this timeless
piece of film history.

Dramatic Centerpiece – “Shelter”
On Wednesday, July 18th at 8:30PM, The Ford Amphitheatre will showcase Outfest’s Dramatic Centerpiece, “Shelter”, writer/director Jonah Markowitz’s first feature produced by Outfest sponsor here! Network. In “Shelter”, Zach is a dead-end surfer kid stuck supporting his family, when he starts hanging with Shaun (played by Brad Rowe of “Billy’s Hollywood Screen Kiss”) and the two become lovers, forcing him to choose between supporting his family and pursuing his own dreams.

Documentary Centerpiece – Homosexuality and the Bible in “For the Bible Tells Me So”
“For the Bible Tells Me So” is the Documentary Centerpiece for the festival and will screen at the DGA on July 17 at 7:30 PM. Filmmaker Daniel Karslake explores the way religious conservatives have misled the public into believing the Bible forbids homosexuality through the unfolding of five moving stories of Christian families with gay or lesbian members, including the Gephardts, and the reflections of major Biblical scholars.

With “Save Me”, “For the Bible Tells Me So” forms the cornerstone of this year’s “Queers in Christ” series, a collection of accomplished films that explore the hot topic of sexual identity and religion. “The Believers” – a documentary about a transgender gospel choir—”Rock Haven” and “We’re All Angels” round out the series.

Outfest Movies: From Restored ‘Parting Glances’ to the Bible vs. Homosexuality

The restored Parting Glances (1986), one of the most acclaimed films about gay relationships, will have its world premiere at Outfest at 8 p.m. Monday, July 16 ’07, at the Directors Guild in West Hollywood.

Directed by Bill Sherwood, Parting Glances stars Richard Ganoung as a man who is about to be abandoned by the two loves of his life: The Current lover (John Bolger) is going away on a work assignment in Africa that’ll last two years; the former lover (Steve Buscemi) has AIDS. (Director Sherwood died of AIDS-related causes in 1990.)

I wasn’t at all crazy about Parting Glances when I first saw it, but it’s undeniably one of the seminal films of its kind. Even if for that reason alone, it’s a must-see for those who haven’t yet sat through it.

The Outfest Legacy Project (in partnership with the UCLA Film and Television Archive) has blown up the film from its original Super 16mm negative to an archival 35mm preservation negative. Additionally, the soundtrack has been fully restored.

Buscemi, Ganoung, and Kathy Kinney (who plays the hostess of the film’s going-away party) are expected to attend the screening.

Also at Outfest on Monday:

Daniel Karslake’s For the Bible Tells Me So is Outfest’s Tuesday, July 17 ’07, highlight (8 p.m. at the Directors Guild in West Hollywood). Karslake’s documentary features interviews with a number of biblical scholars, in addition to five Christian families with gay or lesbian members. Will gays and lesbians (not to mention bisexuals, multisexuals, transsexuals, etc.) be allowed into heaven?

According to the Outfest catalogue synopsis, For the Bible Tells Me So questions the centuries-old interpretation of the Bible as being anti-gay, while confronting the frightening blurring of the line separating Church and State in current American politics.

July 18 Addendum: For the Bible Tells Me So barely deals with the role of Christianity in American politics. Its focus is on five families with gay (adult) children and on how one should interpret religious texts written millennia ago.

Another Tuesday highlight is Norman René’s 1990 AIDS drama Longtime Companion (9:30 p.m., at the DGA), which Craig Lucas adapted from his own play. Though not as great as its reputation would lead one to believe, Longtime Companion was an important movie at the time of its release as it was the first American feature film to deal head-on with the devastation wrecked by HIV among gay males in the United States. (René died of AIDS in 1996.)

Complaints that nearly all AIDS sufferers and non-sufferers in the film are white and upper middle-class missed the point that Longtime Companion was never intended to depict the AIDS epidemic among all ethnic, social, religious, etc. groups in the U.S. More to the mark were complaints that the film felt more than a tad sentimental at times.

Nina’s Heavenly Delights, which I mentioned in the Outfest on Monday post, will screen at 7:00 p.m. at the Santa Monica Laemmle.

I haven’t seen Men in the Nude, but it does sound like great wholesome entertainment.