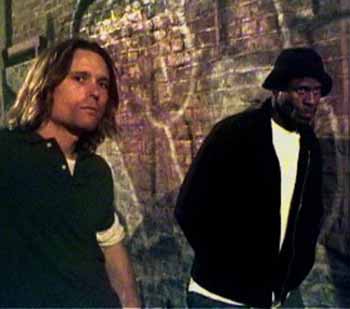 The best international narrative film was Auraeus Solito’s Tuli, about a young Filipino woman who refuses to follow the traditions of her small village. Worse yet, she falls in love with another woman.

Nitzan Gilady’s Jerusalem Is Proud to Present, a portrait of intolerance quite appropriately set during a gay pride event in the holy city for Christians, Jews, and Muslims, was chosen best documentary feature, while Michelle Ehlen was the best actress winner for her performance as a manly lesbian actress who lands a male role in Butch Jamie.

As to be expected, the audience award for best feature documentary went to Daniel Karslake’s For the Bible Tells Me So (above), about the (alleged) misuse of the Bible to justify anti-gay discrimination. At last week’s screening, both the director and bishop Gene Robinson – who is featured in the film – received standing ovations from the enraptured audience. I was one of the few – the only one? – who failed to be converted. Despite Karslake’s good intentions, I found myself emotionally detached from (most of) the proceedings, and I wasn’t fully convinced by the film’s biblical stance, either. (I’ll be posting a full review shortly.)

Festivalgoers chose Eytan Fox’s The Bubble (right) as best narrative feature. Personally, I was expecting more – considering that I did like both Walk on Water and Yossi and Jagger. That said, The Bubble has much to recommend it, and its final sequence stayed with me long after I left the Directors Guild theater. In fact, it’s one of the most haunting endings I’ve ever seen in a film.

Freedom Award:
THROUGH THICK AND THIN directed by Sebastian Cordoba

Outstanding Documentary Feature:
FOR THE BIBLE TELLS ME SO directed by Daniel Karslake

Outstanding Soundtrack:
Michele Mulroney and Micah Schraft for SUNNY AND SHARE LOVE YOU

A few intriguing titles that will be screened at Outfest on Thursday:

Set in London, Alek Keshishian’s French-Anglo-American-made romantic comedy Love and Other Disasters (above, 7 p.m., at the Directors Guild in West Hollywood) follows an American (Brittany Murphy) obsessed with both matchmaking and Breakfast at Tiffany’s. (I’m not sure if it’s the book by Truman Capote or the 1961 bowdlerized film adaptation that starred Audrey Hepburn.) Her roommate (Matthew Rhys) is her chief matchmaking victim, and now the indefatigable matchmaker (strange that her favorite movie isn’t Hello, Dolly!) will try to pair him up with a hot stranger (Santiago Cabrera). However, as so often happens in make-believe comedies and real-life tragedies things don’t go quite as planned.

Rob Williams’ Back Soon (8 p.m. at the Showcase) is a psychological drama with supernatural overtones. After a man’s wife is killed in a car accident, the widower finds himself drawn to a new male friend with whom he develops a, shall we say, quite intimate relationship. Eventually, both men discover that the widower’s new friend had a near-death experience on the same day of the deadly car crash. Uh-oh…

Nitzan Gilady’s Jerusalem Is Proud to Present (9:15 p.m. at the DGA) is described as an “incendiary documentary” in which Jerusalem, “whose name may be translated as ‘city of peace’ – proves to be anything but. Organizers of Jerusalem World Pride 2005 confront fierce, categorical opposition from religious and political leaders who view their peaceful celebration as ‘moral terrorism.’ Palpable danger informs the film’s striking visual style and verve. If you’ve ever wondered what courage looks like, look no further.”

Jerusalem Is Proud to Present sounds like the perfect companion piece to Eytan Fox’s Israeli drama The Bubble (shown at Outfest this past Sunday), which offers a Romeo and Julio story set in the heart of the Jewish-Palestinian conflict.

Senseless hatred, as they say, knows no cultural, national, ethnic, or religious boundaries.

Sean Abley’s Socket (8 p.m. at the Regent Showcase on La Brea) is described as “kinky, dark and joltingly sexual … a sci-fi/horror story about survivors of lightning strikes who develop an insatiable addiction to electric current.” Joltingly sexual indeed.

The Outfest synopsis goes on to explain that the film’s plot revolves around a surgeon who is drawn to a sexy intern, who in turn introduces the lustful surgeon to a group that meets to “juice up.” A downward spiral of electricity and sex addiction ensues. The synopsis makes the film sound like a morality tale. Personally, I hope it’s an amoral one.

In the cast: Matthew Montgomery (who also stars in Back Soon, screening today at Outfest), Derek Long, Alexandra Billings, and director Abley as one of the let’s-juice-up group members.

Russell P. Marleau’s The Curiosity of Chance (8:30 p.m. at the John Anson Ford Amphitheatre on Cahuenga) is supposed to be a “madcap homage to John Hughes teen comedies.” Not a good sign. That said, madcap homages – if they’re really madcap – can surpass the work they’re “paying homage” to by subverting the genre in question.

In any case, in this coming-of-age comedy, an eccentric, openly gay teen named Chance (Tad Hilgenbrink) must adjust to life at a new high school. He recruits a group of oddballs to fight a homophobic bully, all the while longing for the love (or body) of the school’s top jock.

Brooke Sebold, Benita Sills, and Todd Sills’ Red Without Blue (5 p.m., at the Barnsdall Gallery Theatre at Barnsdall Park in Hollywood) chronicles the complex lives of identical twins Mark and Alexander Farley, who, following a childhood “fraught with divorce, drugs and sexual confusion” become estranged in the aftermath of a joint suicide attempt. Eventually, Mark moves to San Francisco, where he meets a boyfriend, while Alex moves to New York, where he becomes Clair.

Red Without Blue won the 2007 Slamdance prize for Best Documentary.

Zabou Breitman’s L’Homme de sa vie / The Man of My Life (7 p.m. at the Directors Guild in West Hollywood), which was screened at last year’s Toronto Film Festival, tells the story of a married man (Bernard Campan) who, while spending time in Provence, develops a strong bond with his openly gay neighbor (Charles Berling) much to their mutual consternation – and to the dismay of the man’s wife (Léa Drucker). Screenplay by Breitman and Agnès de Sacy.

Directed by Auraeus Solito (he of Ang Pagdadalaga ni Maximo Oliveros / The Blossoming of Maximo Oliveros, which won several awards at international film festivals), Tuli (7:45 p.m. at the Directors Guild) chronicles the challenges faced by a tiny-village Filipino woman (Desiree Del Valle) who refuses to be married off, and then adds insult to injury by falling in love with another woman (Vanna Garcia). Will the Philippines ever be the same again? Screenplay by Jimmy Flores.

Lee Friedlander’s Out at the Wedding (8:30 p.m. at the John Anson Ford Amphitheatre on Cahuenga) is a comedy of mistaken identity – or rather, mistaken sexual orientation. A girl returns home for her sister’s wedding only to be labeled a lesbian due to a misunderstanding. Instead of clearing up the matter, she opts to find herself a tried-and-true lesbian, apparently to drive her family nuts. As a result, dark secrets surface, romance blooms, and the family becomes more familial. Screenplay by Paula Goldberg.

As per the Outfest synopsis, Stefan Westerwelle’s feature-film debut, So lange du hier bist / While You Are Here (9:30 p.m. at the National Center for the Preservation of Democracy at 111 N. Central Avenue) creates “an indelible portrait of two men – Georg [Michael Gempart], an elderly pensioner, and Sebastian [Leander Lichti], the attractive young hustler whom he employs on a regular basis. One evening after their session together, to Georg’s delight, Sebastian asks to spend the night rather than return home. Full of atmosphere and nuanced performances, While You Are Here is a tender intergenerational story of two men eager for human connection.” Winner of the jury prize at the Barcelona International Gay & Lesbian Film Festival.

(All Redcat/Disney Hall screenings have been moved to the National Center for the Preservation of Democracy at 111 N. Central Avenue. It is located in Little Tokyo behind the MOCA Geffen Contemporary and across the street from the Japanese American National Museum.)

And lest I forget …

I’ll be skipping that party, though it sure does sound more, er… festive than the Dreamgirls sing-along of a few days ago.

Head or Tails: Tori Spelling, James O’Shea, and Philipp Karner try to decide who will marry whom in C. Jay Cox’s Kiss the Bride.

Directed by C. Jay Cox and written by Tyler Lieberman, the romantic comedy Kiss the Bride will be Outfest’s closing night event (Monday, 8 p.m. at the Orpheum in downtown Los Angeles).

In Kiss the Bride, the first feature film to come out of Outfest’s screenwriting lab, Matt (Philipp Karner) tries to rescue his very intimate high-school bud Ryan (James O’Shea) from a life-ruining mistake: marriage to a woman (Tori Spelling). The problem is that Matt and the bride-to-be become fast buddies, too.

The plot sounds a bit like The Philadelphia Story meets My Best Friend’s Wedding – if so, not a bad thing.

As a plus, director Cox’s Latter Days was a favorite in the gay film festival circuit a few years ago. One of that film’s leads, Steve Sandvoss (the suffering Mormon missionary), has a supporting role in Kiss the Bride, playing – as per the 13th Philadelphia International Gay & Lesbian Film Festival synopsis – a “goofy, sort-of straight guy.”

I don’t know what the heck a “sort-of” straight (or gay) guy is, but I assume I’ll find out after I watch Cox’s latest. (Unfortunately, that won’t happen tomorrow as I won’t be able to make it to the downtown screening.)

The following evening, Kiss the Bride will have its East Coast premiere at the Philadelphia Gay & Lesbian fest.