Hotel Rwanda movie: Facts or fiction about the Rwandan genocide?

Terry George’s generally well-regarded 2004 Hotel Rwanda movie and its audience-friendly portrayal of everyman heroism in the face of unimaginable horror: facts or fiction?

According to an April 2006 Reuters report, Rwandan President Paul Kagame, an ethnic Tutsi who marshaled the counter-takeover during that Central African country’s 1994 Hutu-led genocide against the Tutsi, has accused Hotel Rwanda of representing a “falsehood.”

The Toronto Film Festival’s People’s Choice Award winner, Hotel Rwanda tells the story of the Oskar Schindler-like Paul Rusesabagina, an ethnic Hutu hotel manager in Kigali who is supposed to have saved the lives of more than 1,200 people, mostly ethnic Tutsis, who sought refuge at his property while the genocide was taking place. U.S. actor Don Cheadle plays Rusesabagina; British actress Sophie Okonedo is his Tutsi wife.

In his criticism, Kagame adds that “some of the things actually attributed to this person [Rusesabagina] are not true. Even those that are true do not merit the level of highlight.”

Other have raised the possibility that Hutu extremists were behind the downing of Habyarimana’s plane, for they were afraid that he was going to sign a peace treaty with Tutsi rebels.

To date, the identity of the attackers has not been confirmed.

Spring 2007 update: In the January 2007 issue of Le Monde Diplomatique, Belgian journalist Colette Braeckman questions Bruguière’s assertions while going after the French government and its attempts to “ensure that its ties, both military and personal, to the racist regime of ex-president Juvenal Habyarimana [a friend of former French President François Mitterrand] are forgotten.”

More detailed accusations against Paul Rusesabagina – which he has refuted – can be found in Rwandan lawyer Edouard Kayihura and Kerry Zukus’ book Inside the Hotel Rwanda: The Surprising True Story… and Why It Matters Today, and in Georgianne Nienaber’s Huffington Post article “Hollywood Debunked: What Really Happened Inside the Hotel Rwanda,” which chiefly uses Kayihura and Zukus’ book as a source.

Inside the Hotel Rwanda quotes a letter that is supposed to have been sent by Rwandan doctor and later senator Odette Nyiramilimo to Hotel Rwanda filmmaker Terry George:

People thank [Paul Rusesabagina] on how he was taking care of orphans in the hotel, and he agrees! Terry, there has never been orphans! Who would have brought them? Some people even call me or send nice messages to me thanking me to have been taking care of the orphans at that tragic period. Of course I explain it did not happen like that! But it has happened maybe somewhere else. 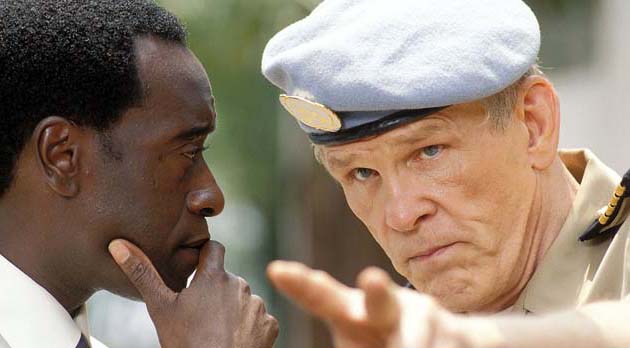 Hotel Rwanda movie with Don Cheadle and Nick Nolte: History or fiction? In Terry George’s 2004 family/political drama Hotel Rwanda, Don Cheadle plays Kigali’s Hôtel des Mille Collines manager Paul Rusesabagina, an ethnic Hutu credited with having saved the lives of about 1,200 people who had sought refuge at his property. Some, however, have questioned Rusesabagina’s portrayal in George’s film, co-written by the director and Keir Pearson.

May 2011 update: As explained in a BBC report, tensions have long existed between Rwanda’s Hutu majority and its Tutsi minority.

The rivalry between the two now similar ethnic groups – modern-day Hutus and Tutsis share the same language, follow the same traditions, and to some extent carry the same Bantu genes – was made considerably worse by the Belgian colonists, who ruled over a large section of Central Africa beginning in 1916. (Rwanda became an independent country in 1962.)

The Belgian occupiers instituted identity cards classifying the locals by their ethnicity, and, in a calculated ploy to divide and conquer, gave the Tutsis the best jobs and educational opportunities.

The Hutus, of course, resented the preferential treatment accorded to the Tutsis. An ethnic revolt in 1959 left 20,000 Tutsis dead. Scores of others fled to neighboring countries.

In the early 1990s, with the Rwandan economy in disarray, ethnic Hutu President Juvenal Habyarimana used the Tutsis as scapegoats, blaming them for aiding Tutsi rebels living abroad.

Following the downing of Habyarimana’s plane (the ethnic Hutu president of Burundi, Cyprien Ntaryamira, and several other officials were also killed), the presidential guard began a bloody campaign of retribution. Trained by the French military, they were abetted by Rwanda’s political, business, and military establishments.

In the aftermath of the Tutsi takeover – Terry George’s Hotel Rwanda movie ends its story there – more than 2 million Hutus were forced to flee to neighboring countries.

As depicted in Terry George’s Hotel Rwanda movie, Paul Rusesabagina is Schindler’s “family friendly” African cousin: though no superhero, he does whatever it takes to save his family and the lives of those who have sought refuge at his Kigali hotel.

Made a decade apart, the two movies have several more elements in common.

Also like Schindler’s List, Hotel Rwanda, as described above, has stirred up quite a bit of controversy with regard to the filmmakers’ fudging of history. Coincidentally, a New York Times article about a new Oskar Schindler biography contradicting his portrayal in Spielberg’s film was published right as Hotel Rwanda was having its initial screenings at movie festivals.

A modest box office performer around the globe, Hotel Rwanda was nominated for three Academy Awards: