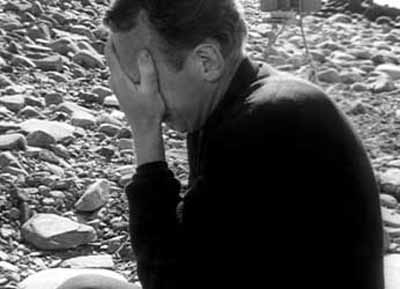 Hour of the Wolf with Max von Sydow.

Hour of the Wolf / Vargtimmen, a 1968 film by Ingmar Bergman, proves the nostrum that even lesser work by a great artist surpasses the better work of lesser artists, for Bergman can get more from the prosaic than just about any other director.

Hour of the Wolf comprises a series of small moments – incomplete scenes that fade out and some blackout sketches, often framed by weird angles and compositions; almost all the creepiness that a viewer feels watching it comes from sequences that in other circumstances would be at best banal, at worst dull. Ostensibly a meditation on the trite ‘madness of an artist’ theme, with overtones of sexual baseness and vampirism, real and psychic, Hour of the Wolf overcomes its horror roots with superb technical screen composition and a bevy of other cinematic trickery that shows Bergman at the top of his game – even though the director’s owes a heavy debt to silent German Expressionism, the Universal horror films of the 1930s, and especially the Val Lewton films of the 1940s.

Hour of the Wolf opens with sounds of a set being built, for just as in Persona – Bergman’s previous feature film – the director-writer wants the viewer to know he is aware of the artifice of film. (A theme he milked repeatedly in the late 1960s.) Max von Sydow plays painter Johan Borg, who retreats to an island with his wife Alma (Liv Ullman). We know this because the film opens with Alma telling the viewer, and the narrator (Bergman?) of the events that have transpired. We already know that she has given the narrator Borg’s diary (to set up a conceit not unlike recent films like The Blair Witch Project), and that he went mad and disappeared into the island’s forest, never to return. The rest of the film is a pastiche of horror film clichés that Bergman alternately subverts and exploits to great effect, though there is only so much exploitation that can be done of such stale material, even by Bergman. That’s why Hour of the Wolf, like Persona, suffers from an emotional vapidity.

We see conversations between the couple, over minor things like paying the bills, and major ones, like Alma’s worry for their coming child. Liv Ullman was pregnant with Bergman’s child in real life, and that fact fit in well with the tenor of both her character and the film. As Johan increasingly grows more bizarre, Alma starts snooping in his diary, and discovers he is being visited by spirits, vampires, and creatures he calls cannibals. Some merely annoy him, and he slaps them down like flies. Others, like an image of his gorgeous former married lover Veronica Vogler (Ingrid Thulin), try to seduce him with carnal pleasures.

An interesting point rarely brought out in Bergman films is the use of recurrent names, like Vogler, Borg, and Alma, from other films. It leaves one pondering if, like in the novels of Kurt Vonnegut and William Kennedy, all of Bergman’s characters are related and occupy the same universe? Is the painter Borg related to old Professor Borg from Smultronstället / Wild Strawberries? Is Veronica Vogler related to Elisabet Vogler from Persona?*

A trip to the local castle, the redoubt for Johan’s fears, sees the duo confront these real or apparitional beings, and the head of them, the archivist Lindhorst (Georg Rydeberg), looks eerily like Bela Lugosi in Dracula. Alma fears that, like the old adage of married couples starting to look alike, she is starting to become more and more like Johan emotionally and psychologically. As a result, she tries to stave off Johan’s deterioration, and seeming obsession with his past lover, Veronica.

There are scenes set in the hour of the wolf, between 3 and 4 AM, the time when, according to the film, ‘It is the hour when most people die, when sleep is deepest, when nightmares are more real. It is the hour when the sleepless are haunted by their deepest fear, when ghosts and demons are most powerful. The Hour of the Wolf is also the hour when most children are born.’ Whether this is a real superstition or a contrivance for the film does not matter. It is effective as a reason to posit Johan’s insomnia and psychic deterioration, which is the template for this run of pessimistic films Bergman made in this period.

In the most important scene in the film – deliberately filmed so that the whiteness of the image becomes unbearable in contrast to the muted black and white imagery of most of the film (courtesy of Sven Nykvist’s gorgeous chiaroscuro cinematography) – we see Johan tell Alma of an incident earlier that summer, in which he claimed to have been bitten by a snake. Instead, he was fishing by the sea, and a small boy in a bathing suit came by, and started striking lewd and sexually suggestive poses on the rocks, as if to lure the artist to his moral end. Perhaps this signaled a latent pedophilic urge in Borg, and thus his guilt, which unleashed the demons, or perhaps the child was merely another cannibal, set on torturing him?

After a brief interlude, the boy viciously attacks Johan, bites him, and Johan seemingly overpowers and kills the boy, smashing his head in and tossing the body out to the sea, where it sinks and rises. This imagery of the floating and sinking corpse reappears later in the film, and one is not sure whether this whole scene is mere symbolism, or if it was a real event, one that triggered Johan’s mental illness due to his guilt over murdering a boy. But if he did really kill the boy, was it even in the context he thinks it was?

As the film nears its climax, Johan shoots Alma with a gun one of the cannibals gives him, then goes to the castle where disgusting things occur, and one of the spirits lies to him, telling him he killed Alma with his gun. Then, he discovers the nude corpse of Veronica Vogler. As icily beautiful as Thulin’s body is, and despite Johan’s embrace of her, when she wakens there is almost nothing sexual that radiates in the scene. Johan sees the other cannibals watching him embrace her, and later Alma discovers him wandering in the forest, lost and almost insane, where he is again attacked by the apparitions.

We do not know what is real, but Alma fears that she now has the sickness that Johan did, and she ends the film looking at the camera, Bergman, and the viewer, and expressing doubts she cannot fully enunciate. Yet, she has told us that what seemed a long journey for Johan to the castle, and all its weirdness was only him being gone a few minutes. So, we have more evidence that the film is mostly his internal struggle, one which Alma has started to share. But with Johan dead she seems no longer haunted by the demons, as if Johan himself was the cause of them.

This dovetails very chillingly with the surreal television classic from the U.K., made in the same year as this film, The Prisoner. In that fictive realm, after seventeen episodes the viewer finds out that the jailer of Number Six and the Prisoner were one and the same; thus, all we had seen was an internal psychological battle between aspects of one individual’s personae. In the final episode, Number Six returns to his former life as a spy, only to seemingly start the whole disintegrative and reintegrative process over again. Johan Borg, at least, seems to be out of his misery by film’s end.

There are several other interesting elements in Hour of the Wolf, such as the ghoul played by Naima Wifstrand literally removing her face as she takes her hat off, and the fact that we, the audience, never see any of Johan’s artwork. (Alma sees it, and there’s a portrait of Veronica hanging in the castle, but we only see the characters looking at the artwork.) A number of reasons could be posited, but impotence and creative block come foremost to mind; as posits for Johan’s suffering, they ring a bit more true than some silly guilt he felt over killing himself in self-defense from a murderous little hellion.

By never seeing Johan’s art, the audience never gets to see what good things Johan was capable of; therefore, as a filmed character study on pure human frustration only Martin Scorsese’s brilliant The King of Comedy tops this film, while only Stanley Kubrick’s The Shining better illustrates the artistic stillicide of the self into bouts of violence, flagellation, and loathing.

Is Hour of the Wolf a great film? No. But, it’s very close to being so, and given its characters, points of reference, and narrative arcs, that’s a hell of an accomplishment. The film, in fact, proves that even a middling Bergman can still create excellent work. If only Steven Spielberg could fail so miserably.

* Note from the Editor: That could be, though the variety of Swedish surnames is notoriously small.

I absolutely love this film. I put it among Iggy’s greatest works. It showed what he was capable of in terms of atmospheric construction, along with the effective use of contrast, etc. The surrealism he owes to Bunuel but then again he was expanding on it; the surrealist nightmare. Films like Mulholland Drive owe a lot to films like this.