How to Be a Latin Lover: Ricardo Cortez & Leading Ladies

Andre Soares 5 years ago
How to be a Latin Lover: Ricardo Cortez, formerly known as Jacob Krantz from a working-class family of Austrian/Hungarian immigrants that had settled in New York City, succeeded in restyling himself as the next – even if, according to some, “second rank” – Rudolph Valentino. It’s unclear whether or not the Italian-born Valentino, who died at age 31 in 1926, would have survived the coming of sound. Cortez, of course, did – but at a price. No longer getting the star buildup at Famous Players-Lasky/Paramount, in the early 1930s he became a contract player at the recently formed and relatively minor RKO, which featured him in series of mostly undistinguished programmers. A move to Warner Bros. in 1933 should have led to bigger and better things, especially taking into account Cortez’s sexually charged performance as Sam Spade while on loan to the studio for the 1931 The Maltese Falcon. Instead, Cortez’s cheats, scoundrels, and gangsters turned out to be characters subordinated to their films’ heroines/victims, which included most major and mid-level Pre-Code Warners leading ladies, the exceptions being Ruth Chatterton, Ann Dvorak, and Ruby Keeler.
Contents hide
1. How to be a Latin Lover and reach superstardom: Personal ambition & initial studio push notwithstanding, why didn’t Ricardo Cortez fulfill his initial promise?
1.1. Mixed grades as leading man
1.2. More Ricardo Cortez leading ladies
1.3. Private self vs. public image
1.4. How to be a 20th Century Fox B movie director
1.5. How to be a New York City businessman: From Hollywood Latin Lover to Wall Street investor

How to be a Latin Lover and reach superstardom: Personal ambition & initial studio push notwithstanding, why didn’t Ricardo Cortez fulfill his initial promise?

Cortez did enjoy some successes as a lead actor at RKO (1930–32), but it is true he was unable to achieve his ultimate goal of becoming a first-tier star. It’s difficult to understand all the reasons why.

Certainly, the censorship associated with the strict enforcement of the Production Code in 1934 (discussed previously), had a deleterious impact on Cortez’s career, making his characterizations, particularly his villainous portrayals, less interesting. But his career was also negatively affected by bad luck, bad timing, and his willingness to accept work in low-budget films.

It’s impossible to say if things might have turned out differently had he worked at MGM or another studio. Actually, he was a Paramount contract player for a few months in 1933 (during the Pre-Code period). After his pact with the financially strapped RKO ended, he signed with Paramount, who promptly announced he would star in several upcoming pictures.

Just when it appeared as if Cortez might finally fulfill his dreams of superstardom, he fell very ill and was forced to bow out of the projects. He ended up having to take multiple weeks off in the winter and spring of 1933 to recuperate. By the time he was finally able to return to work, Paramount seemed to have lost interest.

After a handful of subpar roles, Cortez departed Paramount in late fall 1933 and signed with Warner Brothers as a supporting player, mainly because Jack Warner promised him an opportunity to direct. Despite his friendly relations with Jack (who was a golfing buddy), Warner Brothers mainly placed Cortez in B movies and reneged on the promise. 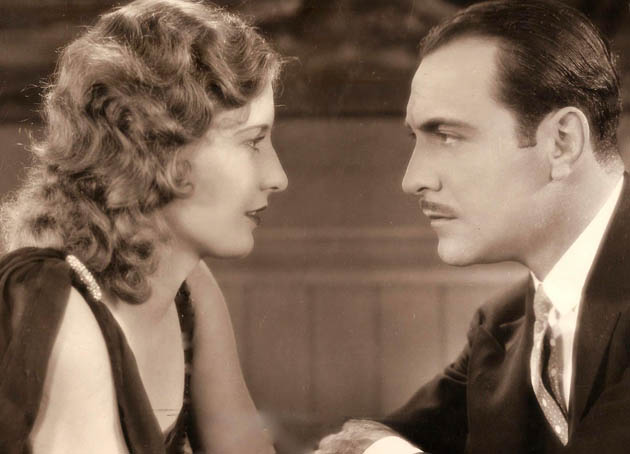 Ricardo Cortez in Ten Cents a Dance, with Barbara Stanwyck at Columbia Pictures. No matter how unthankful the role, whether hero or heel – or, not infrequently, a combination of both – Cortez left his bedroom-eyed, mellifluous-voiced imprint in his pre-Production Code talkies. Besides Stanwyck, during the 1920s and 1930s Cortez made love to and/or life difficult for a whole array of leading ladies, among them Bebe Daniels, Gloria Swanson, Betty Compson, Betty Bronson, Greta Garbo, Florence Vidor, Claudette Colbert, Mary Astor, Kay Francis, Joan Crawford, Irene Dunne, Joan Blondell, and Loretta Young*.

Cortez was a very cautious, guarded person, who didn’t make friends easily, and could be testy on occasion. He wasn’t everyone’s favorite. Some of his costars, both male and female mistook his natural reticence for arrogance. Some resented his friendships with many of the studio heads including Jack Warner.

I never learned how Bebe Daniels, Kay Francis, or Helen Twelvetrees felt about Ricardo, but he spoke very highly of each of them. Although it is doubtful Cortez would ever have won a popularity contest on the set, by and large he maintained friendly relationships with his directors and other craftsmen who were employed on the pictures in which he appeared.

He respected all their roles, especially that of the director, and made every effort to make the films as the directors saw fit. He would sometimes make a suggestion, but the directors had the final say.

* Here are other (in their day, at least relatively well-known) Ricardo Cortez leading ladies/female co-players not mentioned elsewhere in this four-part post (including the intro): 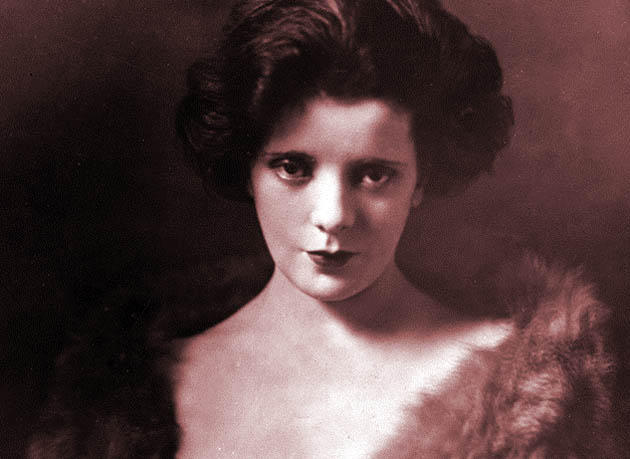 Alma Rubens: The silent era star of melodramas such as Humoresque and East Lynne was Ricardo Cortez’s wife from 1926 to her death of pneumonia at age 33 on Jan. 22, 1931 – the year her husband reached what may well have been the peak of his film career with his portrayal of Sam Spade in Roy Del Ruth’s The Maltese Falcon. In movies since the early 1910s, the San Francisco-born Rubens developed a serious drug addiction problem – heroin, cocaine – in the mid-1920s. Her last lead role was in Victor Sjöström’s 1928 drama The Masks of the Devil, opposite John Gilbert. The following year, she had supporting roles in two part-talkies: Harry A. Pollard’s Show Boat, in which she played the tragic, alcoholic Julie, and Henry King’s She Goes to War, toplining Eleanor Boardman. The year of her death, Alma Rubens’ troubled life was serialized in U.S. newspapers, with the New York Daily News blasting, “Why I Remain a Dope Fiend: The Most Amazing Confession Ever Told! Alma Rubens’ Own Story, Written Personally by the Once Great Movie Star Who Was Ruined by Drugs.”

Private self vs. public image

The answer is very little, which to me speaks volumes about Cortez’s skill as an actor. Despite his good looks, athletic prowess, and success, Cortez was an insecure, self-conscious human being whose early poverty, humble heritage, and conservative upbringing profoundly impacted his life and the decisions he made.

He could be selfish and arrogant, but he also could be very kind and generous. He certainly loved his family and helped them throughout his life. Unlike so many of the evil, often licentious characters he played on the screen, he appears to have been an earnest, responsible, essentially honest person who was not particularly sexually driven.

Outside of his early Hollywood years, and his controversial, headline-making marriage to actress Alma Rubens, who was a drug addict, Cortez largely led a scandal-free life throughout his Hollywood years. His third and final marriage lasted 27 years.

How to be a 20th Century Fox B movie director

In spite of his lack of formal education, Ricardo Cortez was a very intelligent, well-read, hardworking man who took time to learn from the celebrated people he met and worked with. While employed as a film actor, he exhibited an interest in everyone’s job.

By the time he tried his hand at directing at 20th Century Fox during the late 1930s, he knew the filmmaking business inside out. That fact worked to his advantage when he began directing program pictures for [producer] Sol Wurtzel’s B unit.

Cortez directed seven films in all during the period 1939–40. Because they were made quickly and cheaply, none were of any enduring import, but Cortez had some good ideas and demonstrated a flair for creating entertaining and interesting scenes, thus making effective use of the films’ limited budgets and footage. 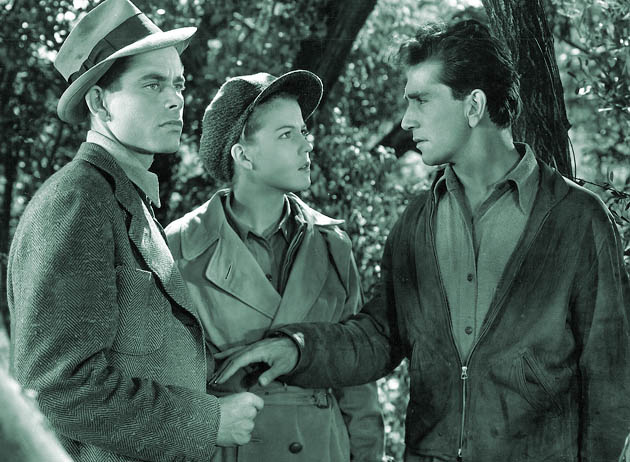 Heaven with a Barbed Wire Fence with Glenn Ford, Jean Rogers, and Richard Conte working under the direction of former Latin Lover Ricardo Cortez. In 1939–1940, Cortez helmed a total of seven B features at 20th Century Fox. Besides the socially conscious Heaven with a Barbed Wire Fence, which was co-written by future Hollywood Ten member Dalton Trumbo, there were, in 1939, Inside Story, Chasing Danger, and The Escape, and in 1940, City of Chance, Free, Blonde and 21, and Girl in 313. In addition to Jean Rogers, Richard Conte, and future megastar Glenn Ford, Cortez’s B movies featured minor players – a few on the way up; a few others on the way down – such as Michael Whalen, Preston Foster, Lynn Bari, Mary Beth Hughes, Florence Rice, Kent Taylor, Kane Richmond, Donald Woods, and Henry Wilcoxon.

Most consider the drama Heaven with a Barbed Wire Fence (1939) to be his best effort. Co-written by Dalton Trumbo, it related the humorous, sometimes heartwarming tale of three young people who encounter various adventures on a quest to seek their fortunes in the American West.

In spite of his interest and potential – and the good reviews he garnered for his efforts – Cortez found directing B movies for Wurtzel to be an overwhelming, frustrating experience, and opted to return to acting in 1940.

How to be a New York City businessman: From Hollywood Latin Lover to Wall Street investor

He essentially retired from acting in the 1950s, and concentrated his considerable energies on his many hobbies and interests. The most prominent of these was investing.

Cortez was a very shrewd investor. Throughout his Hollywood years, innumerable stories were published regarding his speculative ventures which included real estate, various businesses, and creative properties. During the 1930s, he and some other businessman actually tried unsuccessfully to purchase Universal Studios.

After returning to New York to live in the 1960s, the former actor accepted a position as an investment consultant for a top Wall Street firm and worked for them up until his death.

In addition to investing, Cortez was also an avid collector, a world traveler, and a devotee of physical fitness, sports, and men’s fashion. Regarding the latter, most people are surprised to learn that at the height of his popularity (1920s–1930s) Ricardo Cortez was often listed among the best-dressed people in the world.

He wrote innumerable treatises on men’s fashion and exercise, and during the 1940s, became a men’s fashion consultant for Esquire magazine and its affiliate, Coronet.

Did he miss stardom after his retirement? As the years passed, I believe he did. He largely disappeared from the public eye beginning in the 1960s, but when he was occasionally spotted by an entertainment writer or columnist at various events – like charity functions, theatre premieres, or restaurant openings – he seemed to enjoy the spotlight.

During his heyday, Cortez tried to steer clear of the public, but in later years, he appeared to relish attention. When people would recognize him, approach him in a restaurant or a public event and ask for his autograph, he seemed genuinely touched and gratified.

The Magnificent Heel: The Life and Films of Ricardo Cortez at amazon.com.

“How to Be a Latin Lover” – Ricardo Cortez, one of the world’s “best-dressed people,” publicity image via Pinterest.

“How to Be a Fox Director” – Image of Jean Rogers, Richard Conte, and Glenn Ford in Ricardo Cortez’s Heaven with a Barbed Wire Fence: 20th Century Fox.

Image of Barbara Stanwyck and by then former Latin Lover Ricardo Cortez in Ten Cents a Dance: Columbia Pictures.