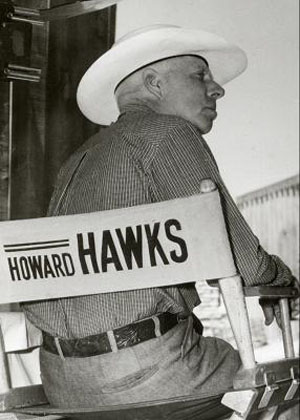 “If Howard Hawks didn’t exist, auteurist film critics would have had to invent him. He was the epitome of the idiosyncratic, existential artist who worked undercover, disguised as a competent craftsman with a clean, direct style. Hawks was equal parts entertainer and intellectual; box office receipts rewarded the former, critical insight revealed the latter. The paradox of Hawks was that he toiled anonymously within the genres and conventions of the Hollywood system yet imbued every film with his distinctive personality and a worldview that valued professionalism and the collaborative spirit above all.

“Not coincidentally, these two traits are essential to the filmmaking process, and the connection between Hawks’ view of his own professionalism and that of his characters was clear to Andrew Sarris, who anointed the director as a member of the pantheon in his seminal book The American Cinema: ‘Like his heroes, Hawks has lived a tightrope existence, keeping his footing in a treacherous industry for more than forty years without surrendering his personal artistry.’ Just as Sarris explained and confirmed Hawks’ stature as a great director, so did the textural richness of Hawks’ entertainments confirm Sarris’ stature as a great critic, and validate the very premise of auteurism.”

I can’t say I agree with the above trio’s view of Howard Hawks’ auteurism – especially since the proponents of the auteur theory tend to ignore the crucial contribution of screenwriters, producers, editors, actors, and other artists to the filmmaking process. (For instance, try looking for the word “screenplay” or “screenwriter” in the above interview.)

And perhaps I’m missing something, but I can’t see a Hawksian imprint on such disparate efforts as Fig Leaves, A Girl in Every Port, Bringing Up Baby, The Big Sleep, Monkey Business, Gentlemen Prefer Blondes (right), or Rio Bravo. Though I guess I could make something up and find some kind of connection, however tenuous, among all those films. But then again, I could do the same for the oeuvre of other studio directors such as Henry Hathaway, Jack Conway, Sam Wood, William Wyler, or Victor Fleming. Where are their champions?

Strange that no one calls George Cukor an auteur, even though Cukor’s work – at least from a thematic standpoint – was much more consistent than Hawks’. Perhaps if Cukor’s movies had mostly focused on guys rather than gals things would have been different. 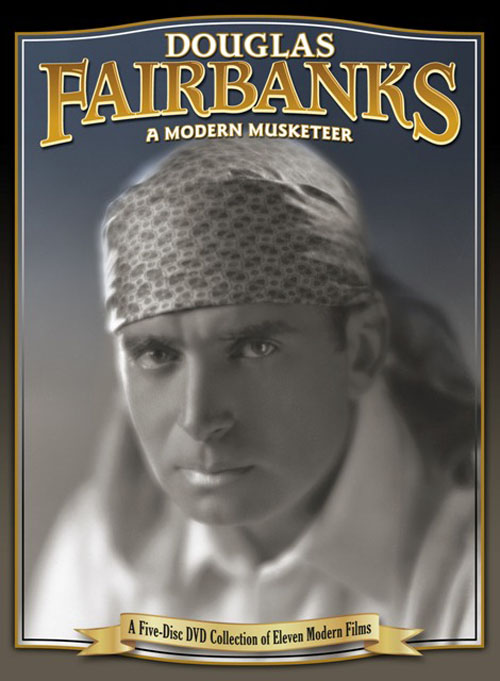 Flicker Alley, described as “a specialty supplier of fine silent films and classic cinema programming,” in association with the Blackhawk Film Collection, has announced the Dec. 2 release of “Douglas Fairbanks: A Modern Musketeer,” a five-disc DVD collection featuring eleven early Douglas Fairbanks’ vehicles. Fairbanks, one of the founders of United Artists and at one point the husband of superstar Mary Pickford, was one of the biggest film attractions in the world from the mid-1910s to the late 1920s.

The Flicker Alley set includes digitally mastered editions from 35mm or original-negative prints of the following films, most of which were made prior to Fairbanks’ swashbuckling phase: His Picture in the Papers, Flirting with Fate, The Mystery of the Leaping Fish, The Matrimaniac (all 1916, produced by Triangle); Wild and Woolly, Reaching for the Moon, and A Modern Musketeer (all 1917-18, produced by Fairbanks for Paramount/Artcraft); When The Clouds Roll By, The Mollycoddle, The Mark of Zorro, and The Nut (1919-1921, produced by Fairbanks for United Artists).

I’ve seen several of the Fairbanks titles included in the set – though most of those in subpar prints. The Mollycoddle, a funny comedy with Fairbanks as a fop who discovers his macho credentials so he can get the girl before the final fadeout, is my favorite of the batch, though The Matrimaniac has some mirthful moments thanks to Fairbanks’ co-star Constance Talmadge – that’s one instance, in fact, when a Fairbanks vehicle wasn’t all about Fairbanks. (I should add that The Mollycoddle was directed by Victor Fleming, he of Gone with the Wind and The Wizard of Oz.)

Of the ones I haven’t seen, A Modern Musketeer sounds particularly intriguing. Only a fragment was known to exist until the Danish Film Institute, in partnership with the Museum of Modern Art and Lobster Films, finished a recent restoration of the complete film, which is accompanied by an optional audio commentary by Jeffrey Vance and Tony Maietta, authors of the new biography, Douglas Fairbanks (Academy of Motion Picture Arts and Sciences / University of California Press, 2008). A Modern Musketeer also boasts a new orchestral score by the Mont Alto Motion Picture Orchestra, which also accompanies The Mark of Zorro – the set’s only major Fairbanks swashbuckler – digitally remastered from an original 35mm fine grain.

Also of special interest is The Nut, which features a little-seen early appearance by Barbara La Marr, a top name in the 1920s when she was known as “The Girl Who Was Too Beautiful.” The film revolves around an eccentric inventor trying to find investors for the social welfare plans of his girlfriend (frequent Fairbanks leading lady Marguerite De La Motte, one of the inspirations for the rising young actress in A Star Is Born).

Included in the bonus materials are a gallery of rare stills from Douglas Fairbanks’ personal collection at the Academy and a booklet essay by Vance and Maietta.

In my view, Hawk’s was an existential humanist helping to define personal and social relationships through character, caricature and within genres that examined American culture.
BTW
Hawkss’ should be Hawks’ Sarriss’ should be Sarris’s or Sarris’

Clarence Brown was an auteur, too. Think of all his Garbo films. I could always see Brown’s touch in them.