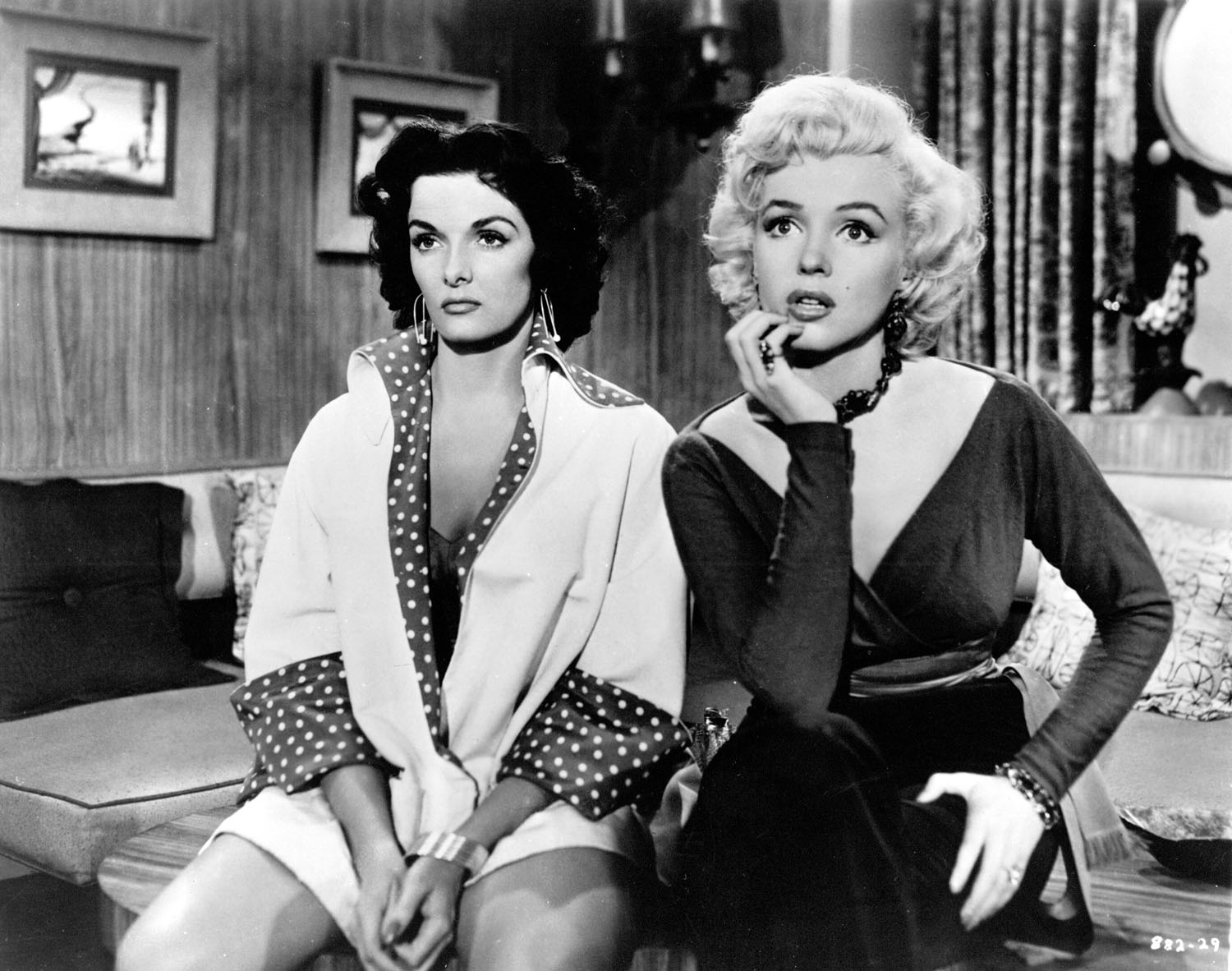 “Late Hawks” is the title of a film series featuring the, what else?, later efforts of Hollywood auteur Howard Hawks, which runs at the Los Angeles County Museum of Art from March 13–27.

Personally, I tend not to buy into the auteur theory in general, and certainly not when it comes to the widely varied work of Howard Hawks. That said, who cares?

The good thing about LACMA’s Hawks series is the chance to catch on the big screen some of the director’s lesser-known efforts such as the battle-of-the-sexes comedy Man’s Favorite Sport? (1965), with Rock Hudson and Paula Prentiss; the car-racing soap opera Red Line 7000 (1965), with James Caan; and the Western Rio Lobo (1970), with John Wayne. That, in addition to the classics Gentlemen Prefer Blondes (1953) and Rio Bravo (1959), and the insipid but great to look at safari flick Hatari! (1962), famous for Henry Mancini’s ditty “Baby Elephant Walk.”

Later in his career, Hawks apparently developed a fondness for John Wayne, who is featured in four of the eight films in the series. (Also, four were co-written by Leigh Brackett, who also penned The Big Sleep for Hawks in 1946. The Brackett titles are Rio Bravo, Hatari!, the Rio Bravo-ish El Dorado, and Rio Lobo.) Wayne and Hawks first teamed up in 1948 in Red River, and I find it lamentable that Hawks didn’t develop instead a special fondness for either Montgomery Clift or John Ireland, both of whom were in the same movie. Or even Joanne Dru, for that matter.

In any case, although I don’t think Wayne makes any of his Hawks movies any better than they might have been, he doesn’t make them necessarily worse, either. Rio Bravo, in fact, despite its conventional take on heroic behavior remains one of my favorite Westerns. Supposed to be Hawks’ answer to director Fred Zinnemann and screenwriter Carl Foreman’s each-man-for-himself High Noon, Rio Bravo (accused of being a To Have and Have Not rip-off) features sheriff Wayne, town drunk Dean Martin, wet-behind-the-ears Ricky Nelson, and three-time Oscar winner Walter Brennan as a group of unlikely buddies out to fight an unscrupulous cattle baron doing his best to free his murderer brother.

In sum, no man is an island as long as you have Dean Martin and his booze, Ricky Nelson and his songs, and Walter Brennan and his Oscars around. Not to mention Angie Dickinson, stealing the show as a no-nonsense Woman of the World nicknamed “Feathers.” LACMA quotes Jacques Rivette as saying that “Howard Hawks epitomizes the highest qualities of the American cinema. His marvelous blend of action and morality is probably the secret of his genius.” I think I’d have liked some of Hawks’ films better – Rio Bravo among them – had they been more amoral (or even immoral), but that’s just me.

Rio Lobo is a perfectly watchable adventure tale that pairs Wayne with Jennifer O’Neill and Mexican movie idol Jorge Rivero (and future studio head Sherry Lansing in a small role), but of the “Late Hawks” films I’ve seen the two I’d most recommend – apart from Rio Bravo – are Gentlemen Prefer Blondes and Land of the Pharaohs.

Gentlemen Prefer Blondes is one of the sauciest, most colorful musicals ever made, with Marilyn Monroe (right) and Jane Russell in top artistic form – and lots of hunky guys in top physical form – in addition to scene-stealer Charles Coburn doing what he does best – stealing scenes.

Land of the Pharaohs (co-written by William Faulkner) is hardly considered one of Hawks’ seminal works, but I found it thoroughly engrossing when I saw it (admittedly, it’s been a while). In this sumptuous Ancient Egypt melodrama, Jack Hawkins plays Pharaoh Khufu, who uses a captured architect (James Robertson Justice, delivering the film’s best performance) to design his tomb. Joan Collins plays the pharaoh’s scheming second wife. Both films should be watched on the big screen.

Also, El Dorado and Hatari!, in which the four-legged animals way outact the two-legged ones, will be screened in Technicolor IB prints that once belonged to John Wayne’s private collection.

Schedule and synopses from LACMA:

A sheriff enlists a drunk, a lady gambler, an old man and Ricky Nelson to help him fight off a ruthless cattle baron. “A western that’s practically a chamber piece, with barely a shot of the open skies—but it feels every bit as expansive, thanks to its gallant optimism and generous spirit…so clear and simple in its basic construction that it verges on elemental. —Dennis Lim, Los Angeles Times.
1959/color/141 min. | Scr: Jules Furthman, Leigh Brackett; dir: Howard Hawks; w/ John Wayne, Dean Martin, Ricky Nelson, Angie Dickinson.

Monroe dazzles and Russell razzles in this eye-popping female buddy movie with songs. A landmark encounter in the battle of the sexes. —Dave Kehr, Chicago Reader.

Hawksian innuendo abounds in this fishing comedy about a best-selling author facing off with a superwoman publicist.

An aging gunfighter is revitalized when he joins forces with a drunken sheriff. “So much is coming to an end in El Dorado. Wayne, Hawks, Hollywood, the heroic western, the classical cinema…Humor and affirmation on the brink of despair are the poetic ingredients of the Hawksian western. And now memory. Especially memory. Only those who see some point in remembering movies will find El Dorado truly unforgettable. —Andrew Sarris.

Land of the Pharaohs

March 20 | 9:45 pm
A pharaoh obsessed with life after death builds a great pyramid for himself and his treasures. “All of Hawks’s intelligence is confirmed and exercised in Land of the Pharaoh, the only epic film which has style, rigor, and plastic beauty. —Henri Langlois.
1955/color/104 min. /Scope | Scr: William Faulkner, Harry Kurnitz, Harold Jack Bloom; dir: Howard Hawks; w/ Jack Hawkins, Joan Collins, Dewey Martin.

The professional and sexual conflicts among a young group of stock-car racers,

Cary Grant Films: From I Was a Male War Bride to Miscast Macho Aviator + Submarine Commander