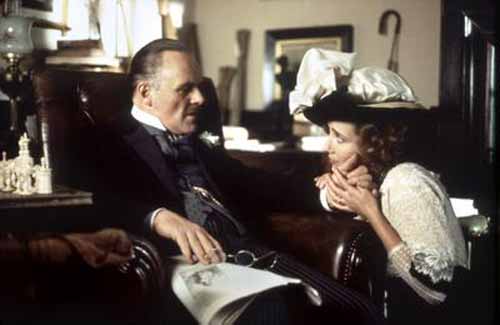 Howards End, the best of the five Oscar nominees for best picture of 1992, will be the final film screened in the Academy of Motion Picture Arts and Sciences’ “Great To Be Nominated” series. Howards End will screen on Monday, Aug. 20, at 7:30 p.m. at the Academy’s Samuel Goldwyn Theater in Beverly Hills.

Howards End also happened to be the next-to-last good film made by Ivory and his partner, Ismail Merchant. Following the equally classy and profound The Remains of the Day in 1993, the duo failed to make films that pleased either audiences or reviewers.

For the record, the Oscar winner that year was the grossly overrated Unforgiven, directed by U.S. critics’ celluloid idol Clint Eastwood. (Sometimes I wonder if Unforgiven, Mystic River, and Million Dollar Baby had been directed by some unknown talent – especially if in a language other than English – if U.S. critics would have paid any attention to any of those films.) The other 1992 nominees made for an eclectic trio: The good (The Crying Game), the bad (Scent of a Woman), and the puny (A Few Good Men).

Sam Karmann’s Oscar-winning live-action short Omnibus, about a commuter who has accidentally boarded an express train, and Paul Berry’s Academy Award-nominated Gothic animated short The Sandman will be screened prior to the feature. (Berry is the man chiefly responsible for the look of The Nightmare Before Christmas, directed by Tim Burton.)

“Great To Be Nominated” will return in spring 2008 with its fifth installment, screening films that were honored between 1993 and 2007.

Tickets for Howards End are $5 for the general public and $3 for Academy members and students with a valid ID. Tickets may be purchased by mail, in person at the Academy during regular business hours or, depending on availability, on the night of the screening when the doors open at 6:30 p.m.

Besides Howards End, other notable James Ivory movies include The Europeans (1979), based on a Henry James novel, and featuring Lee Remick, Tim Woodward, Wesley Addy, and Robin Ellis; Jane Austen in Manhattan (1980), with veteran Anne Baxter, Robert Powell, and Tim Choate; Quartet (1981), from Jean Rhy’s novel, and starring Maggie Smith, Isabelle Adjani, Alan Bates, and Anthony Higgins; and Heat and Dust (1983), from a novel by Ruth Prawer Jhabvala, and starring Julie Christie, Greta Scacchi, and Christopher Cazenove. Jhabvala adapted for the screen all of the aforementioned titles.