Those who missed Ang Lee’s box office underperformer Hulk with Eric Bana will now be able to check out The Incredible Hulk, this time in the form of Edward Norton. This latest Hulk was directed by Louis Leterrier, whose short list of directorial credits includes the crime thriller The Transporter and its sequel. Norton and Zak Penn wrote the screenplay inspired by Jack Kirby and Stan Lee’s Marvel comic book superhero. [Norton, perhaps with Leterrier, apparently rewrote Penn’s original draft. I’m not sure what the final credits are going to look like.]

The plot follows Bruce Banner as he attempts to find a cure for his gamma-radiation illness – the one that ruins his complexion whenever he gets upset. In the meantime, the US military, in particular the warmongering Gen. Thunderbolt Ross (William Hurt), is pursuing Banner so he can be used as a walking-talking weapon of mass destruction.

Banner is about to find a cure, but then enters The Abomination (Tim Roth), more destructive than all of the world’s military and religious nuts put together. Now, what’s a poor Hulk to do?

The Incredible Hulk is scheduled to open in the United States on June 13.

The Incredible Hulk gets ready for a little action 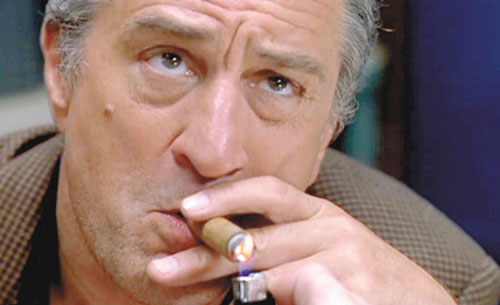 First Francis Ford Coppola poo-poos Robert De Niro and Al Pacino for their recent choices of movie roles. Now, in her blog Deadline Hollywood Daily, Nikki Finke posted an “exclusive” scoop about Robert De Niro’s departure from Creative Arts Agency (CAA) to look for greener pastures at Endeavor. One commenter, purportedly a disgruntled (and anonymous) “CAA Agent,” posted the following message that has been circulating all over town (make it “all over world” by now).

(Note: I didn’t bother using [sic] next to the several typos. The name of the Al Pacino movie, by the way, is the box office dud 88 Minutes. The three-hour De Niro film is called The Good Shepherd. It could be that the “CAA Agent” got those film titles wrong; it could also be that all the typos found in the message were deliberately made; and it could be that the message itself is a total fake.)

Why did Bobby leave us?

They promised they could turn back time.

They promised they could get him 20 million a picture.

They promised they could get a release for his Something happened, a Barry Levinson show biz pic that’s has no market, and Mark Cuban lost a fortune on.

They promised they could get him the $1 million production fee on every picture he does, that he and his partner put their names on, and do nothing to earn.

They promised they could convince Hollywood that they should still pay that 1 million vig on top of his acting fees.

They promised him they’d find a respectable release for the Pacino picture he did last summer [the box office dud Righteous Kill], that basically stars two 65 year old guys as detectives – while the audience is under 35, and has no interest in seeing.

As I said, they promised him they could turn back time, and make him 50 again, and relevant, and hot, and interesting to today’s movie going audience.

And they probably promised that they’d find a way to erase the memory of all of America about the number of god-awful paycheck films he did during the past ten years.

DeNiro had a choice ten or so years ago. He could either go the Nicholson route – very selective, very particular, protect the brand – or go out sending himself up in tripe like Analyze this, which made money but turned him into that “old psycho guy.”

And he could of concentrated on quality stuff, but instead wanted to keep funding his little empire in New York.

A year ago, Bobby came to us complaining that he was losing a fortune underwriting the film festival every year, and wanted us to find bigger corporate sponsors.

We tried, but the stumbling block was always the same thing: The corporations all thought that the Tribeca film festival was a not-for-profit organization, sponsored by the city. But when they got under the hood, they found out that it was all for the greater glory of Bobby and Jane and her husband, and the corporate stuff shied away from it. Bobby held us responsible for his own greed, his own avarice, and his own megalomania.

And it’s just like the studios now ask us: Why should we pay this guy – who doesn’t open a movie – the payoff to his production company, just so he can add his name as a producer.

Sure, there’s more; he thought we should have delivered an Oscar for his paint-drying slow 3 hour Good Shepard. But we couldn’t.

And finally, if really want to understand why now, why today, look at the review today in Variety for the Pacino “86 Minutes” stinker. It’s directed by Jon Avnet, (a career ending review), who just happens to be the director of Bobby’s next movie. (With Pacino.)

Bobby blames everybody but himself for the way he’s squandered his career, and refused lots of quality pictures because they wouldn’t give him producer credit.

Amy Adams Enchanted p.r. “Amy Adams is having one of those enchanted Manhattan moments. ‘Look, it’s snowing!’ she cries, looking out of the window of an Upper West Side cafe to the snowflakes gently settling on the cabs and buildings outside. ‘It’s sticking!’

“Adams has an ability to make whatever she’s focusing on seem irresistible,” continues Donna Freydkin’s “Rising star Amy Adams’ career seems enchanted” in USA Today. “There’s a sparkle to her, a glimmer that hasn’t escaped the notice of a certain co-star of hers, Meryl Streep, who just wrapped the drama Doubt with Adams.

“’Amy has a little light on inside her that burns – sometimes a soft light, sometimes a hot little blue flame, but you are aware always of the light,’ Streep says via e-mail. ‘It is her immediacy as an actress, that present quality that makes her special.’

“And even as her career soars, Adams, 33, relishes small pleasures. Sure, she just sang live at the Oscars, but she is equally besotted with the mushroom soup she’s having for lunch, offering up a taste of the murky substance she swears is amazing.”

What I find curious about this USA Today article is that it shows how what amounts to p.r. disguised as news hasn’t changed at all in the last nine decades. Just compare this puff piece on Amy Adams to an article about Gloria Swanson or Mary Pickford or Sessue Hayakawa written back in 1918 by some Motion Picture or Photoplay scribe. The stars are different, but the fawning articles remain the same.

John Patrick Shanley’s Doubt, about a nun who suspects that her school’s most popular priest / teacher likes little boys, is a remarkable play. Here’s hoping that the movie version starring Meryl Streep, Amy Adams, and Philip Seymour Hoffman will be even better (Shanley directed from his own adaptation).

Having said that, I should add that I find problematic Hoffman’s casting as the youthful, athletic, handsome priest. In fact, Brian F. O’Byrne, who played the role on Broadway, would have been ideal. (Chris McGarry capably played the accused priest onstage in Los Angeles.)

Also, however much I admire Meryl Streep, it’s more than a little saddening that the outstanding Cherry Jones wasn’t able to reprise her stage role on film.

Missing from the film version as well is another excellent performer, Adriane Lenox, who plays the mother of the allegedly molested boy. Viola Davis has replaced her.

Amy Adams’ latest movie, Miss Pettigrew Lives for a Day, in which Adams co-stars with Oscar winner Frances McDormand (Fargo), opens in the U.S. tomorrow. Doubt will open later this year, and Adams is once again pairing up with Meryl Streep in Nora Ephron’s comedy Julie & Julia, currently in pre-production.

On the Road Characters: Any Similarities Not a Mere Coincidence

the movie was osam. specialy the character played by liv tyler was too good. if i have to give marks two this movie. i would have given it 4 out of 5.

I didn’t know Tim Rothe was in it when I saw it, it was a really good choice.

agreed… where are the ears?! mind you, the film was alot better than the 2003 version looking forward to the next two hulk films hope norton sticks with it. 8 out of 10 - and i don’t even like the hulk character.

The abomination could beat the shit out of the hulk. But where are his ears? He doesnt look like the real abom.

The film had a lot of sequences shotsher in Rio de Janeiro.