Andre Soares 3 years ago
The Music Man with Robert Preston and Shirley Jones: Independence Day movies. Numerous Hollywood musicals have attempted to capture that elusive, reality-averse quality known as “Americana-ness” – e.g., Yankee Doodle Dandy, Meet Me in St. Louis, In the Good Old Summertime, On Moonlight Bay, By the Light of the Silvery Moon – but perhaps none was as determined to succeed in that endeavor as Warner Bros.’ Morton DaCosta-directed 1962 blockbuster The Music Man, starring Robert Preston as a con man out to fool a bunch of small-town Iowa hicks. As the local nerdy librarian, Shirley Jones sees through him, but then love happens – and everything and everyone is suddenly transformed.

Produced and directed by Morton DaCosta, and adapted by Marion Hargrove from Meredith Willson’s Tony Award-winning, DaCosta-directed stage hit, Warner Bros.’ hugely successful movie version of The Music Man (1962) relates the tale of an entrepreneurial con man (Robert Preston, reprising his Tony-winning role) out to make an easy buck in small-town Iowa by pretending to be a marching band instructor. And then Marian the librarian (Shirley Jones) and a miracle happen.

Mostly an endless compendium of artificial storytelling, repetitive musical numbers, and theatrical histrionics, The Music Man does have one major plus: the climactic ending (see further below), featuring a magically shiny marching band parading through the streets of Hicksville, ahem, River City, Iowa.

The four-minute sequence is undeniably great cinema, and surely one of the most exhilarating finales in motion picture history. Just never mind the editing oddity of the Shirley Jones/Robert Preston reunion, when the street where Jones is seen running inexplicably – or, again, magically – becomes an uninterrupted sidewalk in the next scene.

Something else noteworthy about The Music Man is that seemingly everybody on screen is white. Of course, that’s the way things were in just about any Upper Midwestern small town in the early 20th century; but in the early 21st century, when history/facts must be refashioned to please (ever well-intentioned) ideologues, and ethnic diversity, no matter how disconnected from reality, simply must be seen on big and small American screens, The Music Man’s ocean of white faces does look odd.

One of these white faces, in particular, also looks awful pretty: that’s Shirley Jones (Best Supporting Actress Oscar winner for Elmer Gantry, 1960), an appealing, talented actress whose role as River City’s stuffy librarian turned stylish beauty should have been both larger and meatier.

Curiously, despite its six Academy Award nominations, including Best Picture (Ray Heindorf was the sole winner, for Best Adapted Musical Score), The Music Man failed to be shortlisted in the directing, acting, and writing categories.

And here is a little more information about The Music Man, its setting, and its talent: 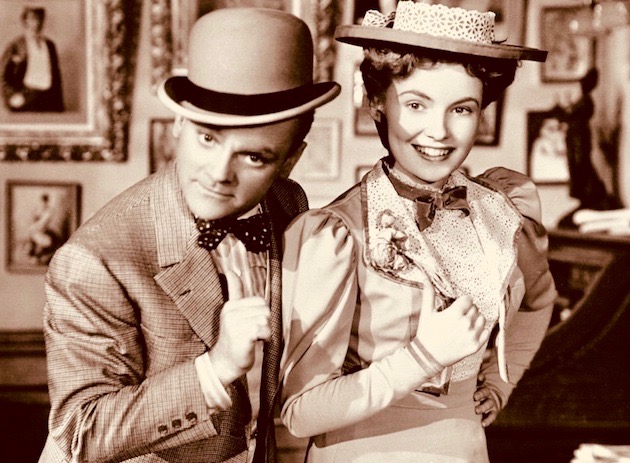 Yankee Doodle Dandy with Joan Leslie and James Cagney: Independence Day movies. One of the biggest commercial hits of the 1940s, Warner Bros.’ Michael Curtiz-directed 1942 biographical musical Yankee Doodle Dandy stars James Cagney as entertainer George M. Cohan (whom he would also play in a cameo in The Seven Little Foys, 1955), Walter Huston as his father, Rosemary DeCamp as his mother (DeCamp was 11 years younger than Cagney), and, as his sister, the star’s real-life sibling, Jeanne Cagney. As Cohan’s eventual wife, Joan Leslie is, as always, a lovely presence, even if given little to do but look lovely. Robert Buckner and Edmund Joseph were credited for the screenplay, with uncredited assistance from Julius J. Epstein and Philip G. Epstein – who that same year joined forces with Curtiz on another 1940s favorite, Casablanca.

One of the most intolerably phony musicals ever made, Michael Curtiz’s Yankee Doodle Dandy (1942) was also one of the biggest box office hits of the 1940s, earning James Cagney, as all-American entertainer George M. Cohan, an underserved Best Actor Oscar – in a year that had veteran Ronald Colman delivering a magnificent performance as an amorous amnesiac in Mervyn LeRoy’s Random Harvest.

Seven years later, Cagney would do what’s probably the best work of his career as an all-American psychopathic murderer with a mommy fixation in Raoul Walsh’s crime thriller White Heat. It goes without saying that he was left Oscar nominationless. Adding insult to injury, John Wayne received enough votes to be shortlisted in the Best Actor category for Allan Dwan’s asinine flag-waver Sands of Iwo Jima.

In Yankee Doodle Dandy, much more pleasant to watch than James Cagney is Joan Leslie as his romantic interest. A gorgeous and capable actress, Leslie was badly misused at Warner Bros., oftentimes cast as insipid sweet young things when she was at her best in complex roles such as that of Ida Lupino’s deceptively “nice” younger sister in Vincent Sherman’s The Hard Way (also 1942).

George M. Cohan, by the way, unpatriotically came to this world on July 3, not, as seen in the film, July 4. More patriotic were Eva Marie Saint (Best Supporting Actress Oscar winner for On the Waterfront, 1954) and – all red, white, and blue in Subiaco, Italy – Gina Lollobrigida (Bread Love and Dreams, Beat the Devil). The former is turning 95 today; the latter is turning 92.

Born on the 3rd of July George M. Cohan starred as the patriarch of a New England family at the turn of the 20th century in the 4th of July-set Ah, Wilderness!, which opened on Oct. 2, 1933, at the Guild Theatre on Broadway. “Everyman” Will Rogers replaced Cohan when the play went on tour.

Somewhat surprisingly, the author of this sentimental slice of “Americana” was none other than Eugene O’Neill, he of the heavy-duty dramas Anna Christie, Strange Interlude, Desire Under the Elms, Mourning Becomes Electra, and, later on, The Iceman Cometh and Long Day’s Journey into Night.

Yet lighthearted stuff apparently came easy to O’Neill. He is supposed to have written Ah, Wilderness! – “a comedy of recollection in three acts” – over the course of one month.

Critics were generally impressed, with the New York Times’ Brooks Atkinson, for one, opining, “As the writer of comedy[,] Mr. O’Neill has a capacity for tenderness that most of us never suspected.”

Cast in the old Cohan/Rogers role – the latter had become a Fox star – was Best Actor Academy Award winner Lionel Barrymore (A Free Soul, for the period 1930–1931). As his cute but troubled adolescent son, Eric Linden delivered, in the words of the New York Times’ Andre Sennwald, “the most sensitive and moving performance he has ever given on the screen.”

The Academy Award-nominated wife-and-husband team of Frances Goodrich and Albert Hackett (The Thin Man, 1934) was credited for the big-screen adaptation. 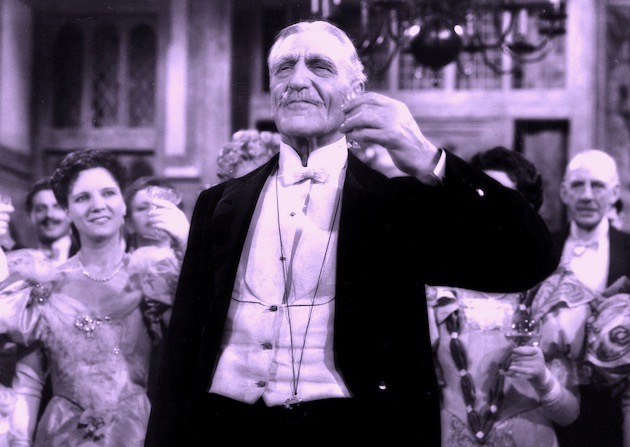 The Four Feathers with C. Aubrey Smith: Independence Day movies? TCM’s series of Independence Day movies officially comes to a close with MGM’s 1935 adaptation of Eugene O’Neill’s Ah Wilderness!. But why call it a day/night after a mere seven features and one short? Next in line is producer Alexander Korda and director Zoltan Korda’s 1939 version of The Four Feathers, a paean to the intrinsic valor of British men, to the greatness of the British Empire, and, by extension, to the superiority of the European “race” and culture (as if there were only one). Of note, The Four Feathers features stage and film veteran C. Aubrey Smith as both John Clements’ prospective father-in-law and the embodiment of the British military establishment. In real life, Smith, a former test cricketer, was the Lieutenant-Governor of the Hollywood Raj, having settled in Southern California in the early 1930s.

And what better way to end one’s marathon of American Independence Day movies than by watching a 1939 release celebrating … the greatness of the British Empire?

Directed and produced by Hungarian-born talent, respectively, Zoltan Korda and Alexander Korda, The Four Feathers is a British-made exemplar of English-language movies of the mid-to-late 1930s – along with the Kordas’ Sanders of the River and The Drum, and Hollywood’s The Lives of a Bengal Lancer, The Charge of the Light Brigade, Gunga Din, and Beau Geste – exalting British imperialism. Needless to say, that’s the good kind of domination and exploitation, as opposed to the bad kind espoused by the Germans of the period.

Shot in Technicolor, the mid-1890s-set The Four Feathers features John Clements (instead of the originally announced Robert Donat) as a British officer who, accused of being a coward for having resigned his post as he was about to go fight in the Mahdist War in North Africa, strives to regain his self-respect and social standing by proving to his peers, family, and fiancée (June Duprez) that he’s no wuss.

How best to achieve that honorable goal than by traveling to Egypt to show the local bloodthirsty Muslim darkies that no one could beat strong-willed white Christian Europeans, especially those of the English-speaking variety?

Putting things in historical perspective, The Four Feathers and its ideals – jingoistic, imperialistic, racist, sexist (you’re a man only if you’re willing to die for the Fatherland) – came out right as Britain was about to be nearly sunk by the Nazis.

To this day, the Kordas’ – admittedly, great-looking – film is considered the most rousing of the various movie versions of A.E.W. Mason’s 1902 novel.

One more thing about TCM’s series of Independence Day movies:

The short The Declaration of Independence (1938) was directed by early silent film leading man Crane Wilbur, whose movie career – as actor (The Perils of Pauline, The Heart of Maryland), director (The Devil on Horseback, Outside the Wall), and writer (Women’s Prison, The Bat) – spanned half a century.

And the last word in this two-part post about TCM’s Independence Day movies and their connection to personal, national, and international politics goes to Langston Hughes.

Below is the final verse of his 1935 poem “Let America Be America Again,” found in The Collected Poems of Langston Hughes.

Out of the rack and ruin of our gangster death,
The rape and rot of graft, and stealth, and lies,
We, the people, must redeem
The land, the mines, the plants, the rivers.
The mountains and the endless plain—
All, all the stretch of these great green states—
And make America again!

Replace “America” with the country of your choice and we have ourselves a global movement.

See below The Music Man’s exuberant grand finale with Robert Preston, Shirley Jones, Timmy Everett, Susan Luckey, et al. parading through the streets of River City to the sound of 76 trombones and 110 cornets. And further below is the list of TCM’s Independence Day movies.

Image of Robert Preston and Shirley Jones in The Music Man, one of TCM’s Independence Day movies: Warner Bros.

Gene Hackman Movies: Bonnie and Clyde + I Never Sang for My Father