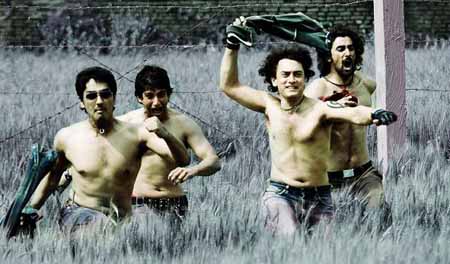 As expected, the big winner at the 8th International Indian Film Academy (IIFA) Awards held Saturday night at the Hallam FM Arena in Sheffield, United Kingdom, was Rakeysh Omprakash Mehra’s political musical Rang De Basanti / Paint It Yellow, the tale of several alienated university students – among them Aamir Khan – who develop a sense of sociopolitical awareness after getting involved with a filmmaker (played by Alice Patten, daughter of Chris Patten, the UK’s
last governor of Hong Kong) attempting to make a movie about Indian nationalists whoc rose up against British rule.

Mehra’s blockbuster ended up with more wins than any other film. In addition to its four Popular victories, Rang De Basanti garnered 7 other awards in the Technical Categories (chosen by Indian Film Academy members). Even so, the film failed to sweep the Popular awards as I’d expected it to.

The best director trophy, for instance, went to Rajkumar Hirani for the musical romantic comedy Lage Raho Munnabhai, which also won awards for best story and best dialogue, while Rang De Basanti‘s Aamir Khan lost the best actor award to Hrithik Roshan for his portrayal of a man with super-powers in Krrish / There’s No One Like You.

Unlike other film academies, the IIFA give out several awards that, depending on one’s mood, could be considered either quirky or tacky – possibly both. For instance, there’s a Best Actor in a Comic Role category (the winner was Tusshar Kapoor, who plays a dolt in Golmaal), Best Actor in a Negative Role (or, in MTV speech, Best Villain – Saif Ali Khan, above, sans glasses, as a revamped Iago in Vishal Bharadwaj’s adaptation of Othello set in the world of Indian politics, Omkara), and best male/female playback singers. (Shaan was the male choice for his singing in Fanaa; Sunidhi Chauhan was the female choice for her singing in Omkara.)

Quirkier (or tackier) yet, the IIFA allows fans to vote on the “Most Glamorous Stars.” Unsurprisingly, the winners this year were beauty-of-beauties Aishwarya Rai and hunk-of-hunks Hrithik Roshan.

On a more serious note, director Deepa Mehta was honored with a special award for her international contribution to Indian filmmaking. Mehta’s win is a curious – and welcome – recognition for the director’s efforts. Her 2005 Indian-Canadian drama Water caused a furor among Fundamentalist Hindus, who destroyed the film’s Indian sets and threatened to kill the director. Production had to be scrapped, being later resumed in Sri Lanka. Water – the last installment of a controversial trilogy – went on to win three Canadian Genie Awards and to receive a best foreign-language film Oscar nomination.

According to reports, about 10,000 fans gathered at the Hallam FM to watch some of Bollywood’s biggest stars walk on the green carpet – a reminder of global warming. But with Aishwarya Rai, Hrithik Roshan, Abhishek Bachchan, Amitabh Bachchan, Salman Khan, and Preity Zinta parading around, it’s doubtful that onlookers paid much attention to either the color of the carpet or the looming global eco-disaster. (The British media, as provincial as any other, focused on the presence of UK Big Brother participant Shilpa Shetty, who received a special award from local authorities for her poise in the show during which Shetty was the target of ethnic slurs.)

Thousands of other fans reportedly watched the proceedings on big screens in Leeds, Bradford, and Rotherham. As per the BBC, about 10 percent of the income for Bollywood films come from outside South Asia, with the UK as the second-biggest market for Indian films. Sheffield county has the third-largest population of British Asians in the country, and tourist officials were hoping the awards would bring £10 million to the area.

Amitabh Bachchan – who performed a much-applauded dance duet onstage with son Abhishek – failed to win a best supporting actor award (and so did Abhishek), but he won’t be returning to India empty-handed. Bachchan and fellow film veterans Yash Chopra and Shabana Azmi were awarded honorary doctorate degrees by Leeds Metropolitan University earlier in the weekend. As per a Gulf News report, the Leeds university “has recently forged close links with India and the International Indian Film Academy … and has several students from India.” (I’m assuming they’re hoping to attract more Indian students in the future.)

And finally … Swanky dance numbers or no, the evening’s emotional highlight was apparently the presentation of the Lifetime Achievement Award to veteran actor Dharmendra, who received a standing ovation from the audience.

“Very few people know that it was on Dharmendra’s insistence that I got the role of Jay in Sholay [1975],” presenter Amitabh Bachchan said. “If it were not for him, I would never have been a part of this great film. My wife describes him as a Greek God, but for me, he has always been a very good human being.”

“I was a small-town boy in Phagwara and I used to look at this magical world of cinema and wonder if I would ever be a part of it,” the 71-year-old honoree remarked. “From those days to this stage, it has been a very eventful journey.” Since his 1960 debut, Dharmendra has appeared in nearly 250 motion pictures. In his upcoming film, Apne, he will appear for the first time with both his sons, Bobby and Sunny Deol.

Clearly, Hollywood and its Oscars don’t have a monopoly when it comes to both inspiring and fulfilling dreams of cinematic success.

June 3: Next Saturday, June 9, the International Indian Film Academy (IIFA) (website) will announce the winners of the 8th IIFA Awards in the Popular Categories. The ceremony will be part of the International Indian Film Academy Weekend, which will take place between June 7-10 in Yorkshire. In addition to the IIFA awards ceremony, the IIFA Weekend will offer a global business forum, a celebrity charity cricket match, and an Indian film festival. (Each year, the IIFA festival is held in a different city of a country with a large Indian population. Last year, Dubai hosted the event; the previous year’s party was held in Amsterdam.)

This year, Rang De Basanti / Paint It Yellow received the most nominations, 15 in all, including best picture, best direction (Rakyesh Omprakash Mehra), best actor (Aamir Khan), and best screenplay (Mehra and Rensil Dsilva). This political-musical-coming-of-age drama (it’s all that) follows a group of spoiled university students as they sing & dance their way to sociopolitical awakening. The film has already won 7 awards in the IIFA’s Technical Categories (there are no nominations for those categories; only the winners are announced), including best cinematography (Binod Pradhan) and best editing (P.S. Bharathi), and it’s the odds-on favorite to sweep the 2007 IIFA Awards.

Rang De Basanti, which irked India’s military upon its release, was that country’s submission for the 2007 Academy Awards though it ultimately failed to get a nomination. It did, however, get a BAFTA nomination in the best foreign-language film category.

Other best picture nominees are:

Rakesh Roshan’s Krrish / There’s No One Like You, a sequel to Roshan’s 2003 action-sci-fi hit Koi… Mil Gaya / I Found Someone, described as the story of India’s “first ever superhero” – played by the director’s son, best actor nominee Hrithik Roshan (who also stars in Dhoom 2);

Rajkumar Hirani’s Lage Raho Munnabhai, a musical comedy-drama about a dolt (Sanjay Dutt) who, while trying to win the heart of the girl he loves, gets help from none other than the spirit of Mahatma Gandhi;

and Sooraj R. Barjatya’s Vivah, about how a young couple tries to cope after their lives are turned upside down by a major tragedy.

The 8th Indian Film Academy Award nominations in the Popular Categories were announced on April 30, 2007.

The 8th Indian Film Academy Award winners in the Popular Categories were announced at the Hallam FM Arena in Sheffield/Yorkshire on June 9, 2007.

The winners of the Technical Awards were announced on April 18, 2007.

(” *” denotes the winner in each category)

Outstanding Achievement by an Indian in International Cinema: Deepa Mehta

Winners in the Technical Categories

Best Action: Tony Siutung, Shyam Kushal, Krrish / There’s No One Like You

Best (Visual) Special Effects: EFX studios, Krrish / There’s No One Like You

The winners at the 33rd Seattle International Film Festival were announced this past June 17.

The Norwegian production Sons / Sønner, which sounds like a darker version of Todd Field’s Little Children, was given the New Director Award. The film follows a short-tempered man’s attempts to prevent an alleged sexual predator from targeting his neighborhood’s leisure center. Instead of accomplishing his objective, he ends up making things more dangerous for all involved.

As per the jury’s statement, “Sons completely meets its own objectives and manages to successfully navigate a morally difficult subject matter. Sons is a remarkable debut, combining consummate storytelling ability with a fully realized cinema aesthetic.”

The film was directed by Eric Richter Strand, from a screenplay written by Strand and Thomas Seeberg Torjussen.

The Seattle festival’s Golden Space Needle Award for best film, voted on by audience members, was given to John Jeffcoat’s American-made romantic comedy Outsourced, about a man (Josh Hamilton) whose job is outsourced to India, where he goes to train his replacement and to – unexpectedly – find romance.

Daniel Waters, who wrote the well-received 1989 comedy Heathers, was voted best director for Sex and Death 101. This U.S. production is described as a “mordant comedy about a successful executive and ladies man whose life is turned upside down by a mysterious email.” Heathers alumna Winona Ryder plays “a femme fatale on a rampage of coma-inducing crimes against sexist men.” Simon Baker co-stars.

The 2007 edition of the Seattle Film Festival screened 405 films (211 narrative feature films, a record 61 documentaries, 12 archival films, four “secret” features, and 117 short films) from 60 countries during the course of 25 days. The festival came to a close last Sunday with a gala presentation of the North American premiere of Laurent Tirard’s Molière, which will be distributed in the U.S. by Sony Pictures Classics. In the cast of this period comedy are Romain Duris (in the title role), Fabrice Luchini, Laura Morante, Éduoard Baer, and Ludivine Sagnier.

Grand Jury Prize: Everything Will Be Ok, directed by Don Hertzfeldt (USA)

(Winners and runners-up listed according to the number of votes)

my best actor is sharukh khan.

AB rocks, even Big B is getting good rolls now-a-days.

It is sad to see that Dharmendra is getting life time award so late.

I feel that the IIFA awards should be conducted in
Hindi, my reason being that all their films are in
Hindi with sub-titles for those who do not understand. Besides some of the actors cannot speak English and they sound pathetic.

To all the film directors out there. We indians living outside of India would like to see more values and morals in Indian movies. Get rid of the half naked women prancing around and bring in the
more sophisticated Indian women with good values and morals.

I think Taare Zamein Par was such an excellent movie. These kind of movies with substance is what
we would like to see.

FYI: The picture used for Omkara- Saif Ali Khan is the one withOUT glasses and Ajay Devgan is the actor wearing sunglasses.

hey there. just wanted to point out that i don’t think the characters in rang de basanti actually sang the songs. no lip-syncing as far as i remember.