Ingmar Bergman (right) will be the subject of a weekend-long salute – with the screening of five of his Academy Award-nominated and winning films – beginning Friday, April 4, at 7 p.m. at the Academy of Motion Picture Arts and Sciencess’ Linwood Dunn Theater in Hollywood.

The opening night of “An Academy Salute to Ingmar Bergman” will feature a screening of the haunting Fanny & Alexander (1982), Bergman’s official cinematic swan song. Also included in the evening package is the premiere viewing of the touring installation “The Man Who Asked Hard Questions.” Additionally, actor Börje Ahlstedt (who plays Carl Ekdahl in the film) and documentarian Marie Nyrerod, Bergman’s friend and the director of Bergman Island, will take part in a pre-screening panel discussion.

Fanny & Alexander will be followed by the stark The Virgin Spring (1960), a tale of rape, murder, and revenge; Through a Glass Darkly (1961), in which Harriet Andersson, as a woman suffering from schizophrenia, delivers one of the greatest performances in film history; Cries & Whispers (top photo, 1973), with another superb turn by Andersson as a woman dying of cancer, plus Ingrid Thulin and Liv Ullmann as the dying woman’s creepy sisters; and Autumn Sonata (1978), which features a masterful Liv Ullmann-Ingrid Bergman acting duet-duel. (See complete schedule below.)

Three of the films he directed – The Virgin Spring, Through a Glass Darkly, and Fanny & Alexander – won the Oscar for Best Foreign Language Film, while in 1970 Bergman himself was given the Academy’s Irving G. Thalberg Memorial Award, which honors a producer’s body of work.

The Academy’s mini-retrospective will feature screenings of new prints and an exhibition of biographical materials by the Swedish Film Institute (website). It is presented in association with the Swedish Institute and the Consulate General of Sweden.

The schedule/synopses below are from the Academy’s press release:

Through a Glass Darkly (1961)
On an isolated island, a young woman slips into schizophrenia as her father, a writer, dispassionately chronicles her descent. The woman’s discovery of the diary hastens her disintegration, and her husband and brother are implicated in her tragic fate.
Academy Award winner (1961): Foreign Language Film (Sweden)
Academy Award nominee (1962): Writing – Story and screenplay written directly for the screen (Ingmar Bergman)

Sunday, April 6, at 7 p.m.
Cries & Whispers (1972)
This intense character study explores the dynamics among three sisters, one of whom is dying of cancer, and the servant who looks after her.
Academy Award winner (1973): Cinematography (Sven Nykvist)
Academy Award nominee (1973): Best Picture (Ingmar Bergman, producer), Costume Design (Marik Vos), Directing (Bergman), Writing – Story and screenplay based on factual material or material not previously published or produced (Bergman)

Autumn Sonata (1978)
In her last feature film appearance, Ingrid Bergman stars as a concert pianist reunited with her daughter (Liv Ullmann) after a seven-year estrangement; the tension between them is underscored by flashbacks from their earlier lives.
Academy Award nominee: Actress in a Leading Role (Ingrid Bergman), Writing – Screenplay written directly for the screen (Ingmar Bergman)

Tickets for each evening of “An Academy Salute to Ingmar Bergman” are $5 for the general public and $3 for Academy members and students with a valid ID. They are available by mail or at the Academy box office during regular business hours.

The Linwood Dunn Theater is located at 1313 Vine Street in Hollywood. Free parking is available through the entrance on Homewood Avenue. 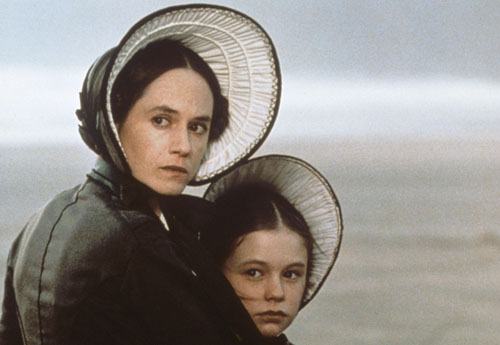 Jane Campion’s masterful 1993 psychological drama The Piano, starring Holly Hunter, Sam Neill, and Anna Paquin, will kick off the Academy of Motion Picture Arts and Sciences’ “Great To Be Nominated” series, which begins its fifth and final installment on Monday, April 21.

The 17-week series, which will run through August 25, will showcase the film from each year between 1993 and 2007 that received the most Academy Award nominations without winning the Best Picture Oscar. All screenings will be held on Monday evenings at 7:30 p.m. at the Academy’s Samuel Goldwyn Theater in Beverly Hills.

The complete screening schedule for part five of “Great To Be Nominated” is as follows:

In 1997 there were two runners-up, L.A. Confidential and Good Will Hunting, each with nine nominations and two wins. In 2006 Babel received six nominations, including Best Picture, while the musical Dreamgirls received seven nominations, the most of any film that year, but (surprisingly) failed to get a Best Picture nod.

In addition to the feature film, the program will include short subjects, behind-the-scenes footage, trailers, and/or music.

Tickets and passes for “Great To Be Nominated” go on sale April 1. Passes for the entire series are $30 for the general public and $25 for students with valid ID and Academy members. Patrons wishing to renew passes from parts one, two, three or four will receive a $5 discount (patrons must bring or mail in their old pass to receive the discount). 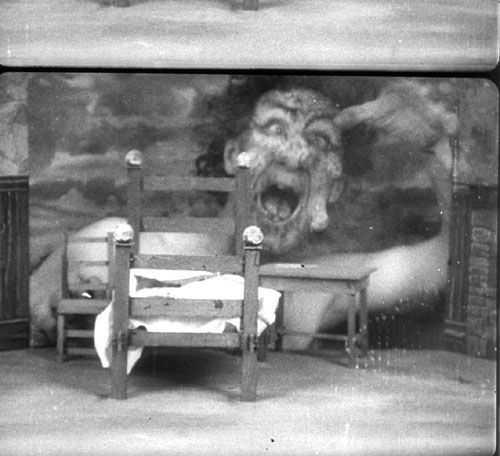 The Dancing Pig, The Haunted Hotel (above and bottom, right), Ben-Hur, and The Teddy Bears will be among more than a dozen early short films screened at the Academy of Motion Picture Arts and Sciences’ “Monday Nights with Oscar” presentation of “A Century Ago: The Films of 1907,” on Monday, April 7, at the Academy Theater in New York City. The program will be repeated on Thursday, April 10, at 7 p.m. at the National Archives’ William G. McGowan Theater in Washington, D.C.

“A Century Ago: The Films of 1907,” which had a Los Angeles engagement late last year, will present, as per the Academy’s press release, “a partial survey of turn-of-the-20th-century international filmmaking with trick films, actualities, primitive dramas and gag films, all produced during this year of creative expansion.”

“Highlights include the pixilation sensation The Haunted Hotel, by J. Stuart Blackton of Vitagraph; the first film version of Ben-Hur, from the Kalem Company [not to be confused with the mammoth 1925 MGM version starring Ramon Novarro], which led to a precedent-setting copyright infringement case; a hand-tinted version of Les Kiriki, Acrobates Japonais, from the Pathe Studios in France; and such crowd pleasers as The Teddy Bears from Edison and The Dancing Pig [above] from Pathe.”

Both presentations – in NYC and D.C. – will feature live musical accompaniment by Michael Mortilla.

Most prints are in 35mm and are drawn from the collections of the Academy Film Archive, the Library of Congress, and the UCLA Film & Television Archive.

Tickets for “A Century Ago: The Films of 1907” in NYC are $5 for the general public and $3 for Academy members and students with a valid ID. Tickets may be reserved by calling 1-888-778-7575. Depending on availability, tickets may be purchased in person on the night of the screening. Doors open at 7 p.m. All seating is unreserved. The Academy Theater is located at 111 East 59th Street in New York City.

Tickets for the “A Century Ago: The Films of 1907” in D.C. are free. Reservations are not required; seating is on a first-come, first-served basis. Doors open at 6:30 p.m. The National Archives Building is located at 700 Pennsylvania Ave., NW; the entrance for special events is on Constitution Ave. (Metro: Archives/Navy memorial [yellow, green lines]). For more information visit www.archives.gov.

In his The Guardian blog, Andrew Pulver discusses “Making 2001: A Space Odyssey“:

“‘He’s a recluse, a nut who lives in a tree in India or someplace.’ So said Stanley Kubrick, according to his biographer Vincent LoBrutto, when the suggestion was made to him that Arthur C Clarke should be his collaborator on a science-fiction film. Kubrick got over his reservations, fortunately, after they met for lunch in April 1964, and the pair set out to ‘make a movie about man’s relation to the rest of the universe — something that had never been attempted, much less achieved, in the history of motion pictures.’

Arthur C. Clarke, the author of the story that inspired Kubrick’s 2001: A Space Odyssey, died yesterday at his home in Sri Lanka. He was 90.

And here are a couple of good Arthur C. Clarke quotes, via quotationspage.com:

Annabelle A. Udo, for instance, calls Michael Kangs West 32nd (top photo) a “deftly written, detective-style film about an ambitious lawyer (played by John Cho, who can be seen elsewhere at the festival in Harold & Kumar Escape from Guantanamo Bay) whose intention is to free a teenager charged with murder but ends up rolling deep with a posse of gangstas in training in Manhattans Koreatown.”

Philip W. Chung begins his review of Never Forever (above), explaining “many Asian Americans can identify with being the only island in a sea of Caucasian faces.” In Gina Kim’s drama, however, the opposite is true: Vera Farmiga plays a young wife who does her best to fit into her Korean-American husbands family, to the point of paying a Korean man (Jung-Woo Ha) to impregnate her (the husband, played by David L. McInnis, is sterile).

According to Chung, the talented Farmiga, probably best known for The Departed, is the films “secret weapon,” as the actress “pitches her performance just right and makes [us] believe a woman would make such choices.”

West 32nd is this years SFIAAFF Centerpiece Presentation. It will be screened on Sunday, March 16, at 6 p.m. at the Castro Theatre. Filmmaker Michael Kang and John Cho are expected to attend the screening.

Never Forever will screen on Sunday, March 16, at 7:50 p.m. at the Pacific Film Archive in Berkeley. The film will open in New York, Los Angeles, and San Francisco on April 11. Filmmaker Gina Kim is expected to attend the screening.

The SFIAAFF runs until March 23.