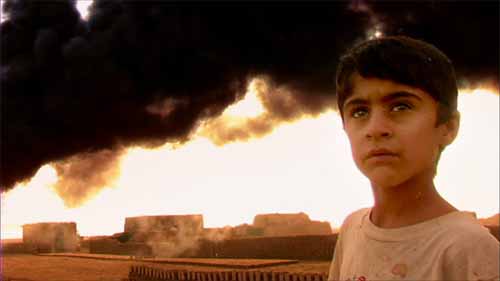 Below is an open letter (dated March 2) that producer John Sinno sent to the Academy of Motion Picture Arts and Sciences. Sinno co-produced James Longley’s Iraq War disaster nonfiction effort Iraq in Fragments, which earlier this year was nominated for an Academy Award in the best documentary feature category.

I had the great fortune of attending the 79th Academy Awards following my nomination as producer for a film in the Best Documentary Feature category. At the Awards ceremony, most categories featured an introduction that glorified the filmmakers’ craft and the role it plays for the film audience and industry. But when comedian Jerry Seinfeld introduced the award for Best Documentary Feature, he began by referring to a documentary that features himself as a subject, then proceeded to poke fun at it by saying it won no awards and made no money. He then revealed his love of documentaries, as they have a very “real” quality, while making a comically sour face. This less-than-flattering beginning was followed by a lengthy digression that had nothing whatsoever to do with documentary films. The clincher, however, came when he wrapped up his introduction by calling all five nominated films “incredibly depressing!”

While I appreciate the role of humor in our lives, Jerry Seinfeld’s remarks were made at the expense of thousands of documentary filmmakers and the entire documentary genre. Obviously we make films not for awards or money, although we are glad if we are fortunate enough to receive them. The important thing is to tell stories, whether of people who have been damaged by war, of humankind’s reckless attitude toward nature and the environment, or even of the lives and habits of penguins. With his lengthy, dismissive and digressive introduction, Jerry Seinfeld had no time left for any individual description of the five nominated films. And by labeling the documentaries “incredibly depressing,” he indirectly told millions of viewers not to bother seeing them because they’re nothing but downers. He wasted a wonderful opportunity to excite viewers about the nominated films and about the documentary genre in general.

To have a presenter introduce a category with such disrespect for the nominees and their work is counter to the principles the Academy was founded upon. To be nominated for an Academy Award is one of the highest honors our peers can give us, and to have the films dismissed in such an offhand fashion was deeply insulting. The Academy owes all documentary filmmakers an apology.

Seinfeld’s introduction arrived on the heels of an announcement by the Academy that the number of cities where documentary films must screen to qualify for an Academy Award is being increased by 75 percent. This will make it much more difficult for independent filmmakers’ work to qualify for the Best Documentary Feature Award, while giving an advantage to films distributed by large studios. Fewer controversial films will qualify for Academy consideration, and my film Iraq in Fragments would have been disqualified this year. This announcement came as a great disappointment to me and to other documentary filmmakers. I hope the Academy will reconsider its decision.

On a final note, I would like to point out that there was no mention of the Iraq War during the Oscar telecast, though it was on the minds of many in the theatre and of millions of viewers. It is wonderful to see the Academy support the protection of the environment. Unfortunately there is more than just one inconvenient truth in this world. Having mention of the Iraq War avoided altogether was a painful reminder for many of us that our country is living in a state of denial. As filmmakers, it is the greatest professional crime we can commit not to speak out with the truth. We owe it to the public.

I hope what I have said is taken to heart. It comes from my concern for the cinematic art and its crucial role in the times we’re living in.

Fifteen short and feature-length documentaries, including the Academy Award-winning March of the Penguins / La Marche de l’empereur and five Oscar nominees, will be screened in part two of the 2006–2007 Contemporary Documentaries series, presented by the Academy Foundation of the Academy of Motion Picture Arts and Sciences and the UCLA Film & Television Archive (website).

The first screenings of the series – March of the Penguins and Grizzly Man – will take place on Wednesday, March 14, at 7 p.m. at the Academy’s Linwood Dunn Theater in Hollywood. Admission is free.

March of the Penguins is set in Antarctica (one of the two extremes of the globe that are melting away), where Emperor penguins march around so as to perform their ritual courtship. That is followed by monogamous mating and, ultimately, a single egg. Radical Christians have seen the penguin lifestyle as proof positive of God’s creative creationism and of the sanctity of monogamous heterosexual marriage – even though, admittedly, humans don’t usually lay eggs. (Check out the BBC story about the heathen gay penguins.)

In Grizzly Man – winner of numerous U.S. film critics awards, but ignored by the Academy – iconoclastic director Werner Herzog documents the life and death of grizzly bear expert and wildlife preservationist Timothy Treadwell, who spent 13 summers living among Alaskan bears. In 2003, Treadwell’s remains, along with those of his girlfriend, were found after they were mauled and eaten by a grizzly. Following the screening, Herzog will discuss the making of the film and answer questions from the audience.

All screenings in the series are free and open to the public. They will begin at 7 p.m. at the Academy’s Linwood Dunn Theater. Filmmakers will be present whenever possible to discuss their films and take questions from the audience. The Linwood Dunn Theater is located at the Academy’s Pickford Center for Motion Picture Study, 1313 North Vine Street, at the northwest corner of Fountain Avenue and Vine Street in Hollywood. Parking is available behind the building through the entrance on Homewood Avenue, one block north of Fountain. For more information, call (310) 247-3600 or (310) 206-FILM.

I truly admire you for your courageous letter to the Academey of ,Motion Picture Arts and Science dated on March 2007.
We need to see more people like you. I am personally proud of you John.
Producer/ Director of Bam 6.6 Humanity Has No Borders.
Jahangir Golestan