Is Brüno Gay? Or anti-gay? Sacha Baron Cohen is seen above as the über-effeminate title character.

“So it goes for Brüno, a movie that, in mercilessly exploiting the discomfort created when straight men are ambushed by aggressive gayness, happens to (surprise!) expose homophobia. Gay groups are reacting with deeply mixed emotions, heightened by the recent triumphs (Iowa) and losses (California) in efforts to legalize gay marriage. Is the film then vulgar, inappropriate and harmful? Or bold, timely and necessary? All of the above?

“Ultimately the tension surrounding Brüno boils down to the worry that certain viewers won’t understand that the joke is on them and will leave the multiplex with their homophobia validated.”

“There’s now a YouTube video … making the rounds which features notables like Peter Paige (Queer As Folk), Nick Verreos (Project Runway), and Brian Graden (LOGO network founder) discussing their concerns about Brüno‘s impact on the LGBT community. (It was shot at an event honoring Milk screenwriter Dustin Lance Black.) Problem is, they haven’t actually seen the film. And it’s always unwise for interest groups to make judgments on a creative endeavor before they’ve actually experienced it.”

“Its timing could be a brilliant coup for its prank comedian star: an effective yet entertaining illustration of the bigotry facing millions of gay Americans. Alternately, it could turn out to be the proverbial straw that broke the camel’s back — a final humiliation after a year of disgraces for a minority whose relationships may or may not have recently been compared to incestuous pairings in a document released by the Obama administration. Universal doesn’t really care either way; Cohen could be dragged to the [West Hollywood gay club] Abbey by an angry mob for an old-fashioned Bastille Day guillotining as far as they’re concerned, so long as their $42 million gamble’s performance at the box office doesn’t earn it the unofficial subtitle ‘Land of the Lost 2.'”

“According to The Wrap, ‘The filmmaker [Larry Charles] conducted “significant reshoots” to temper the troubled reaction of insiders from the Hollywood gay community, according to one person involved in the Bruno production who declined to be identified.’

“Umm, but when? The troubled reactions just started in the last two weeks. Brüno screened last night in New York to long-lead media, it’s cut, finished, locked and loaded. Did they know the reaction was going to be that bad, so mid-way through production shot, ‘gay-friendly’ or did they just use their time travel machines?”

A letter purportedly sent by “an insider” to a couple of news outlets, including Finke’s:

“The film has not been screened for a large number of gays for a reason. Throughout the many private screenings [the filmmakers] have had, the reaction from gays has been almost uniformally one of alarm. It is not a scathing depiction of homophobia – but a grotesque satire of homosexuality. Brüno is a sickening mixture of narcissism, fetishism and shallowness - and he is virtually the only gay representation in the movie. The ‘homophobia’ of the various straight men who he encounters and propositions, seems only natural when faced with such an odious sexual monster. Sacha, Jay and their writers did significant reshoots to try to temper the troubled reactions of the few gay people they invited to screenings. One ‘out’ comedy writer refused to help on the reshoots, because he found the content so disturbing.

“The reshoots did not do much other than manage to get Elton John and a few other music celebs to participate in an ending that seemed to promote gay marriage. However, these musicians - including Chris Martin - continue to be concerned as they have not been shown the finished film. Can you imagine a comedian going around in black face in a movie, doing a stereotype of black Americans without ever once using a black collaborator or showing the film to a black audience? Gay men continue to be the last easy targets of the fratboy comedies so prevalent these days. And while Brüno pretends to be subversive, it is no different.” 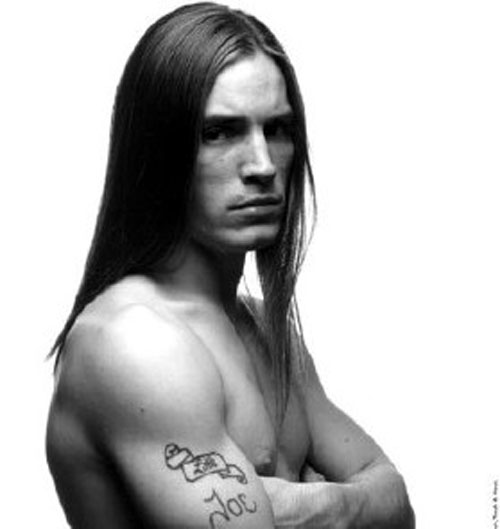 Frameline 33, the 2009 San Francisco International LGBT Film Festival, kicks off on Thursday, June 18, with screenings of Richard Laxton’s An Englishman in New York (above, top photo), starring John Hurt as Quentin Crisp, and Bonham Sláma’s rural Czech drama The Country Teacher (above, lower photo), set universes away from glamorous Park Avenue and the superciliousness of Crisp and his milieu.

Among Frameline 33’s other films are:

The eclectic festival runs until June 28.

Olivier Meyrou’s 2006 documentary Au-delà de la haine / Beyond Hatred, an exploration of the effects of a 29-year-old gay man’s brutal murder in the northeastern French city of Rheims, will be shown as part of PBS’ P.O.V. series on Tuesday, June 30, at 10:00 pm.

François Chenu happened to be at the wrong place at the wrong time. One night in 2002, three skinheads were looking to “do an Arab,” but since apparently none could be found in the Rheims park where they were roaming, they settled for a gay man instead. Chenu reportedly fought back fiercely, but even so he was beaten unconscious and thrown into a pond, where he drowned.

Meyrou’s documentary depicts the aftermath of the young man’s senseless murder, especially the efforts of Chenu’s parents, schoolteacher Jean-Paul and hospital caregiver Marie-Cecile Chenu, to come to terms with their loss, to understand why it happened, and finally, to transcend their desire for revenge.

“As the project proceeded,” Meyrou explained in an interview at the World Socialist Web Site, “the Chenu family became a more and more important part of it, because their reaction to François’ murder was unpredictable, and yet so constructive, that they became the main element in the film. By speaking through the Chenu parents I was able to alert audiences about gay bashing and by showing that this man was such a central part of his family—he was not just a shadow in the park in the middle of the night—lift this tragedy to a more universal level.”

Beyond Hatred won the Berlin Film Festival‘s 2006 Teddy Award for best documentary with a gay theme.

The fact that Dustin Lance Black will – at least for the time being – be better known for his sexual activities than for his Milk screenplay says more about our society (or societies, since the thing has gone global) than about Black himself, whose sex life – with or without condoms; with or without a camera – should be his business and nobody else’s.

Some have tried to turn the online leak of Black’s sex photos into something of momentous importance for gay rights, the spread of HIV, etc. In truth, except for Black and his sex partner those photos are irrelevant. Really, will anyone now decide to fight against marriage equality simply because of Black’s sexual life? Will gay youth the world over go on a condomless sex rampage because of those photos?

Since I’m unfamiliar with Black’s “gay activism,” I don’t know if he has attempted to pass himself off as a “role model” to anyone, or if it’s been others with little imagination and few brain cells who have labeled him thus. In fact, those who push the idea of “perfect” role models aren’t just stupid, they’re dishonest as well. After all, role-model proponents are adults. They know better.

Somewhat ironically, in late summer Black is scheduled to direct Liam Neeson and Jennifer Connelly in What’s Wrong with Virginia, a drama that pits a man’s public persona against his “shady” private life. Written by Black, the story follows a psychologically unbalanced woman (Connelly) whose 20-year secret love affair with a Mormon sheriff (Neeson) may become an issue now that he is running for a state senate seat.

I was wondering if anyone knows if there are any public web photos of Francois Chenu, the man who was attacked and killed in Rheims ? I am interested to seeing his photo
Thanks,
Byron in Berkeley, CA