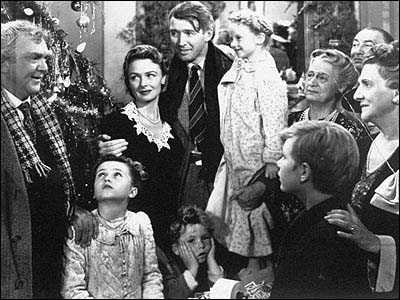 What would the world be like if any one individual human being had never been born? In most cases, the world would quite possibly be an infinitely better place, but the overwhelming majority of (delusional) humans want to feel good about themselves and their place on our overpopulated, fast-rotting planet. Hence movies such as Frank Capra’s 1946 sentimental fantasy drama It’s a Wonderful Life, released the year after the end of World War II – which reportedly left about 60 million human beings dead (plus countless other non-humans), in addition to millions more maimed, homeless, and/or psychologically destroyed.

Starring James Stewart as Small Town America family man George Bailey, who almost kills himself but is prevented from doing so by an angel with way too much time in his hands, It’s a Wonderful Life is a heart-warming Christmas classic for many in the United States, a tragicomic horror story for a minority, and it’s virtually unknown outside the U.S., where either people don’t celebrate Christmas or, if they do, they watch something else instead (The Nutcracker? Santa’s Slay?).

Now, the Internet has been abuzz with outrage following the announcement a few days ago that a It’s a Wonderful Life sequel is in the works – It’s a Wonderful Life: The Rest of the Story – to be written by composer Bob Farnsworth and comedy writer Martha Bolton, responsible for a number of Bob Hope specials of decades past (and no relation to the Martha Bolton found in The Assassination of Jesse James by the Coward Robert Ford). But perhaps all that gritting of tweets may have been not only absurdly overwrought, but also wholly unnecessary.

It almost makes one believe in angels. It’s as if those heavenly beings were interested not only in saving the lives of suicidal movie characters, but also in protecting the seemingly never-expiring real-life copyrights owned by mega-corporations. (Check out: Questions Abound re: Disney Rights to Mickey Mouse.)

Viacom subsidiary Paramount Pictures, which owns the – at least for a while wildly contested – rights to It’s a Wonderful Life, says that producing companies Star Partners and Hummingbird Prods. have yet to acquire the rights to a sequel. As Dave McNary reports in Variety, a studio spokesperson has declared that “no project relating to It’s a Wonderful Life can proceed without a license from Paramount. To date, these individuals have not obtained any of the necessary rights, and we would take all appropriate steps to protect those rights.”

Now, those who know their movie history are probably wondering why Paramount would own the rights to an independently made movie released by RKO Pictures. Well, that’s because in 1998 Paramount acquired Spelling Entertainment and its Republic Pictures subsidiary, owner (via prior acquisitions) of the film rights to Philip Van Doren Stern’s 1943 story “The Greatest Gift,” on which the It’s a Wonderful Life screenplay is based. In other words, Paramount doesn’t own the rights to the movie itself (its copyright failed to be properly renewed), but it can block the production of a sequel to a movie based on a story whose filming rights belong to the studio.

“We have spent a lot of time, money and research that leads us to believe that we are clear on any infractions of the copyright,” Bob Farnsworth is quoted as saying in Variety. “If anyone feels that [they] have a legal claim, we will be happy to talk with them. I believe that whatever resolution needs to be made will be made amicably, in the positive spirit of the project.”

It’s a Wonderful Life was adapted by Frank Capra, and the team of Albert Hackett and Frances Goodrich (Seven Brides for Seven Brothers, The Diary of Anne Frank), with additional scenes by Jo Swerling (Lifeboat, Leave Her to Heaven), and uncredited contributions by future blacklist victim Michael Wilson (Friendly Persuasion, Lawrence of Arabia). Although not exactly a box office hit, the film was nominated for five Academy Awards, including Best Picture, Best Director, and Best Actor (James Stewart).

Grimes, who played George Bailey’s daughter in the 1946 movie, is supposed to return for the sequel – that is, if it ever gets made – as another angel showing another George Bailey (the original’s grandson) what the world would be like had he never been born. No Facebook?