Love triangles seem to be a thing this fall season, what with Natalie Portman, Jake Gyllenhaal, and Tobey Maguire in Jim Sheridan’s Brothers, not to mention Kristen Stewart, Robert Pattinson, and Taylor Lautner in Chris Weitz’s The Twilight Saga: New Moon.

Nancy Meyers’ 2003 romantic comedy Something’s Gotta Give earned Diane Keaton a Best Actress Oscar nomination. Even so, Meryl Streep’s all-but-inevitable 2010 Oscar nod will most likely come by way of her portrayal of Julia Child in another comedy directed by a woman, Nora Ephron’s Julie & Julia.

Co-stars Alec Baldwin and Steve Martin, however, if properly pushed in the Best Supporting Actor category, have a better chance of being singled out come Oscar time.

It’s Complicated, which is scheduled to open in the U.S. on Dec. 25, has won the National Board of Review‘s Best Ensemble award.

Among Bullock’s notable movie credits are While You Were Sleeping, Miss Congeniality, 28 Days, The Lake House, the Best Picture Academy Award winner Crash, the recent hit The Proposal, and the recent flop All About Steve.

As per the Santa Barbara Film Festival’s website, the American Riviera Award “was established to recognize an actor who has had a strong influence on American Cinema.”

It’s Sandra Bullock’s turn now, though her performance in The Blind Side will more likely land her only a Golden Globe nod. Even so, an Oscar nomination isn’t really out of reach, if only for sentimental reasons. After all, Bullock has never even been nominated.

Tickets for the American Riviera Award can be purchased through the Santa Barbara Film Festival’s website. 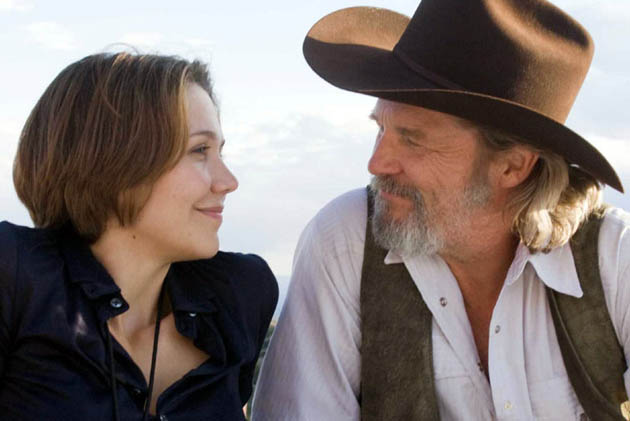 Crazy Heart with Jeff Bridges and Maggie Gyllenhaal. During awards season, Southern California film festivals and events honor – surely just a coincidence – Academy Award-buzzy performers and filmmakers. This year, two of them are Sandra Bullock (at the Santa Barbara Film Festival) and Jeff Bridges (at the Palm Springs Film Festival). Bullock is a possible Best Actress nominee for the sleeper blockbuster The Blind Side; Bridges is a possible Best Actor nominee for Scott Cooper’s $7 million-budget Crazy Heart, which, à la Slumdog Millionaire last year, is supposed to have narrowly escaped from a direct-to-video fate.

Veteran Jeff Bridges will receive the Desert Palm Achievement Award at the 2010 edition of the Palm Springs International Film Festival, to be held Jan. 5–18. The Awards Gala will take place on Tuesday, Jan. 5, at the Palm Springs Convention Center. The ceremony will be hosted by Entertainment Tonight‘s Mary Hart.

At least some Oscar buzz seems to be a requirement in order for an individual to become an honoree at Southern California events taking place early in the year.

Believe it or not, Bridges, who turned 60 this past Dec. 4, has been acting in movies for four decades. His Oscar nominations were for:

Among Bridges’ other film credits are Grant Heslov’s recently released The Men Who Stare at Goats, Iron Man, Seabiscuit, The Fisher King, The Fabulous Baker Boys, Tucker: The Man and His Dream, The Big Lebowski, Against All Odds, and Hearts of the West.

His father was actor Lloyd Bridges. His brother is actor Beau Bridges.

In other movie award news, Toronto will be the setting of the 2011 International Indian Film Academy Awards; the Ontario metropolis will be the first North American city to host the event. The 2011 edition, which will include festivities and screenings, will take place between June 16–19.

The first International Indian Film Academy Awards ceremony was held at the Millennium Dome in London in 2000, which was followed by events in cities as diverse as Amsterdam, Dubai, Singapore, and Johannesburg. The awards ceremony is supposedly watched by 350 million people worldwide.

‘Ocean of Pearls’ in Los Angeles

And speaking of South Asian(-related) cinema, Sarab Singh Neelam’s Ocean of Pearls, a drama about traditional Sikh values coming into conflict with life in 21st century North America, opens on Friday, Dec. 18, at the Laemmle Sunset 5 in West Hollywood.