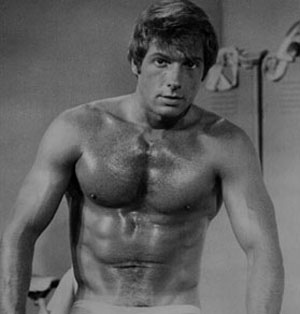 Jack Wrangler, the blond, handsome 1970s sex star – and a lifelong smoker – has died from complications of lung disease in Manhattan. He was 62.

Wrangler: Anatomy of an Icon, a documentary chronicling Wrangler’s life and career – including his marriage to big-band singer Margaret Whiting – was released last fall. Earlier this week, Wrangler was screened at the London Lesbian & Gay Film Festival.

“Jack Wrangler knew the power of image-making and inspired an entire generation to be comfortable in their own skin and to become the man of their dreams,” said the film’s director, Jeffrey Schwarz.

According to Schwarz, Wrangler wasn’t sure about being the subject of a documentary.

“Are you sure people will actually be interested in this stuff?” he asked the director.

“After the film hit the festival circuit, I found out the answer was most certainly YES,” Schwarz writes in The Advocate. “Sold-out showings of Wrangler: Anatomy of an Icon let audiences reconnect with the fantasy figure they came of age with. Jack was delighted to know that so many people remembered him, and that his story resonated with a new generation. His story shows how one can deliberately redefine oneself and step forward confidently and fearlessly in the world.”

Born John Stillman on July 11, 1946, in Beverly Hills, he was the son of television producer Robert Stillman, among whose credits were the TV series Rawhide and Bonanza. Under his real name, John Stillman began his acting career as a kid in the religiously themed 1950s NBC series The Faith of Our Children.

From there, Stillman began bartending and go-go dancing in West Hollywood, and – now as Jack Wrangler – on to a role in a San Francisco play in which he had to appear nude. (His stage name was taken from the label on his plaid work shirt.)

As per the IMDb, Wrangler’s last job in front of the cameras was in Behind the Green Door, The Sequel (1986).

Wrangler met Margaret Whiting, among whose hits were “That Old Black Magic” and “Moonlight in Vermont,” in the 1970s. The couple were eventually married. Their age difference – Whiting was 22 years his senior – and the fact that Wrangler continued to be open about his (gay) sexual orientation led to quite a bit of speculation about the actual nature of their union.

Unfazed, Wrangler crafted Whiting’s cabaret acts and was credited with conceiving Dream, a 1997 Broadway revue of Johnny Mercer songs featuring Whiting. In addition, he created and directed a show mixing Mercer songs with excerpts from John Berendt’s bestseller Midnight in the Garden of Good and Evil, about a gay-related murder in Mercer’s hometown of Savannah, Georgia.

Additionally, he co-wrote (with Carl Johnes) an autobiography, The Jack Wrangler Story or What’s a Nice Boy Like You Doing?, published in 1984, and starred in a one-man off-Broadway show.

He was also an activist for AIDS/HIV causes.

“For me, I felt I needed some true grit in my life, y’know? I felt that I had this formal, white-handkerchief upbringing and that I was not going to survive in the world unless I got down and did something gritty,” Jack Wrangler told the Palm Beach Post in a 2005 interview.

“I was never ashamed of anything I did,” he added.