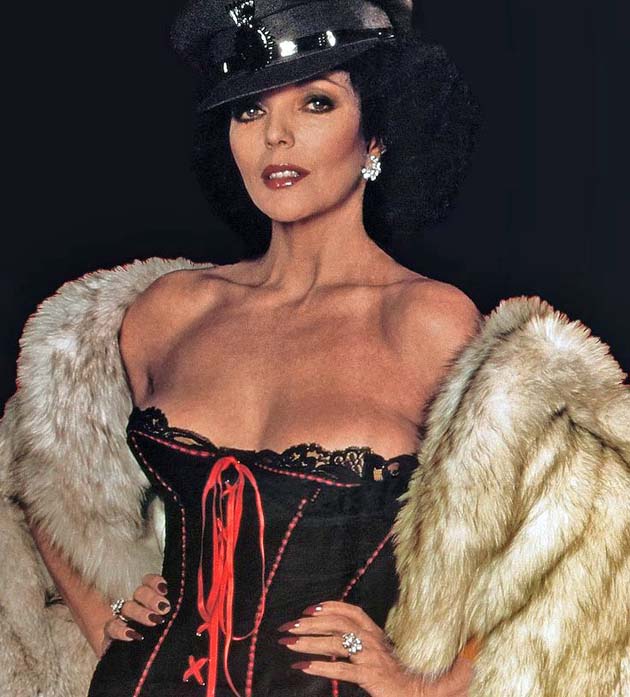 Jackie Collins, best known for a series of bestsellers about the dysfunctional sex lives of the rich and famous and for being the younger sister of film and television star Joan Collins, died on Sept. 19 in Los Angeles. The London-born (Oct. 4, 1937) Collins was 77.

Collins’ tawdry, female-centered novels – much like those of Danielle Steel and Judith Krantz – were/are immensely popular. According to her website, they have sold more than 500 million copies in 40 countries. And if the increasingly tabloidy BBC is to be believed (nowadays, Wikipedia has become a key source, apparently), every single one of them – 32 in all – appeared on the New York Times’ bestseller list. (Collins’ own site claims that a mere 30 were included.)

Sex makes the world go round

On the BBC obit, Jackie Collins – who is supposed to have enjoyed a “schoolgirl fling” with Marlon Brando – is quoted as saying that she “never felt bashful writing about sex,” adding that her novels had “helped people’s sex lives.”

Numerous such novels were turned into movies, beginning as early as the silent era. Some were highly popular; others were critical and commercial duds. A follow-up post will provide a cursory glance at several of these films.

A very minor film and television actress in the 1950s (All at Sea, Intent to Kill), Jackie Collins became a published novelist in 1968, when the scandalous The World is Full of Married Men – banned in Australia! Labeled “disgusting” by Barbara Cartland! – came out.

“Barbara Cartland said to me, ‘Oh, Miss Collins, your books are filthy and disgusting and you are responsible for all the perverts in England,’” Collins told PORTER magazine in 2014. “I paused for a few moments and said, ‘Thank you.’”

Curiously, despite Barbara Cartland’s strong disapproval, the huge international success of Jackie Collins’ “filthy” novels, and the fact that a number of sensational books have (at least from a commercial standpoint) made a successful transition to the big and small screens, there have been only eight film and TV adaptations of Collins’ literary oeuvre.

Equally curious, all four feature films based on her novels have been minor productions.

Below: The Stud trailer with Joan Collins and Oliver Tobias

If People is to be believed, The Stud cost $600,000 and grossed $20 million internationally prior to its (censored) U.S. debut.

“Dreadful sequel to The Stud from the Collins sisters,” bitched Time Out, “cynically predicated on the supposed desire of the depressed masses to glimpse the Mayfair disco-culture high-life they otherwise can’t afford.”

Its box office-friendly nudity and simulated sex notwithstanding, neither The Stud nor The Bitch did much for Joan Collins’ film career – at the time on life support (Empire of the Ants, Game for Vultures, Sunburn).

On the other hand, as the story goes these two entries in the Collins movie cannon gave her the opportunity to become a television superstar, leading TV mogul Aaron Spelling to invite her to play the meticulously attired and coiffed villainess Alexis Carrington in the long-running hit series Dynasty. (According to reports, Sophia Loren and Elizabeth Taylor had previously turned down the part.)

Both The Stud and The Bitch were executive produced by Jackie Collins’ second (and last) husband, Oscar Lerman. The Collins-Lerman duo also joined forces on the all but ignored 1979 movie version of The World Is Full of Married Men, a low point in the careers of two Oscar-nominated performers: Anthony Franciosa (A Hatful of Rain), as an advertising executive and unfaithful husband, and Carroll Baker (Baby Doll), as the wife who decides to have a little extra-marital fun of her own. B movie director Robert Young (not to be confused with the Father Knows Best star) handled the proceedings.

Although hardly another Emmanuelle, Variety referred to The World Is Full of Married Men as a “sexploitation melodrama which, cunningly, will titillate both sexes,” while complaining that “Collins’ manipulative technique does not allow for in-depth characterization.”

Oscar Lerman was also one of the producers of sports photographer Neil Leifer’s obscure 1979 drama Yesterday’s Hero, unique in that it’s the only original screenplay credited to Jackie Collins. Ian McShane is featured as an alcoholic former soccer star – purportedly a fictionalized version of Northern Irish footballer George Best – attempting to make a comeback while becoming involved with Suzanne Somers, girlfriend of rock star and soccer team owner Paul Nicholas.

Fast forward to 2010 and the fourth and most recent big-screen adaptation of a Collins novel: Harley Cokeliss’ British-made Paris Connections (2010), with screenplay credited to Michael Tupy. Nicole Steinwedell stars as a journalist who travels to Paris to investigate the mysterious death of a model and former interviewee, while Alain Delon’s son Anthony Delon plays a photographer and the heroine’s maybe/maybe-not love interest.

Also in the Paris Connections cast: Trudie Styler, plus veterans Anouk Aimée (A Man and a Woman) and Charles Dance (as a Russian). Collins herself was one of the listed producers of the you-blinked-you-missed-it effort. 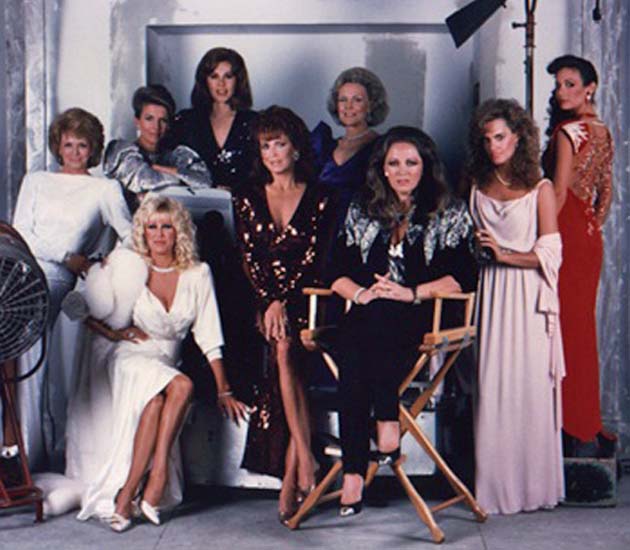 More successful were Jackie Collins’ made-for-television adaptations. The passage below was taken from the mammoth – and, according to People, “smarmy” – 1983 bestseller and literary reality show Hollywood Wives.

Elaine Conti awoke in her luxurious bed in her luxurious Beverly Hills mansion, pressed a button to open the electrically controlled drapes, and was confronted by the sight of a young man in a white T-shirt and dirty jeans pissing a perfect arc into her mosaic-tiled swimming pool.

She struggled to sit up, buzzing for Lina, her Mexican maid, and at the same time flinging on a marabou trimmed silk robe and pressing her feet into dusty pink mules.

I know women like that. And there’s nothing wrong with them, except that they live their lives in a vacuum. They actually say things like, ‘I need a new dress to wear for the party,’ and you say to them, ‘But you spent $4,000 for a dress last week,’ and they say, ‘But I need it.’ I know one woman who says, ‘Honey, my Rolls gets to the edge of Beverly Hills and automatically turns around and comes home.’

About two years after publication and long before Desperate Housewives and The Real Housewives of Beverly Hills, Hollywood Wives became a campy ABC miniseries directed by Robert Day and produced by Howard W. Koch (The Manchurian Candidate, The Other Side of Midnight), with Dynasty‘s Aaron Spelling credited as one of its executive producers.

“Give ABC’s Hollywood Wives credit,” wrote the Los Angeles Times’ Howard Rosenberg. “It is refreshingly bold for this season because none of its characters has cancer, sexually abuses children or is suicidal. Oh, there is someone with a small problem in that he’s a mad killer, but nobody’s perfect.”

Hollywood Wives is refreshingly irrelevant, happily ignoring every critical issue of our time. Its characters are too busy doing lunch and sex – when they’re not doing their hair and nails – to worry about anything but doing lunch and sex.

This is a story about greed, lust, blackmail, treachery and murder – just a few of the things that we on the entertainment beat encounter daily.

Lower than expected ratings at first

Perhaps because most TV watchers initially felt they already had enough sleaze, lunch, sex, hair, and nails in their own lives, the three-episode Hollywood Wives started out with “lower-than-expected ratings” – seventh for the week. The good news for Spelling and company was that the miniseries finished with a “40 share (percentage of sets in use) forecast by some advertising agencies.”

Joanna Cassidy. Mary Crosby. Stefanie Powers. Suzanne Somers (as the star of the upcoming movie Tigress, in which she gets captured by a band of pygmies). Oscar nominee Robert Stack (Written on the Wind). Andrew Stevens. Catherine Mary Stewart.

A by now largely forgotten TV movie “sequel,” Hollywood Wives: The New Generation, was aired in 2003. “Real kitsch might not be a thing of beauty, but it surely can be a thing of comedy,” wrote Miles Beller in the Los Angeles Times. “… Wives is a marriage made in camp heaven. Here love means never having to say I’m serious – at least not in credible dramatic terms.”

A trio of Jackie Collins novels about an Italian-American family enmeshed in the world of organized crime also became television miniseries. Although they were adapted by Collins herself, neither one made as much of a “cultural” impact as Hollywood Wives.

Lady Boss was directed by Charles Jarrott, whose credits included the TV movie Chances (based on a Danielle Steel novel) and the 1977 blockbuster The Other Side of Midnight (based on a Sidney Sheldon novel).

According to recent reports, Jackie Collins believed Angelina Jolie should play Lucky in case a film adaptation of her Santangelo family novels were ever to become a reality.

Another Jackie Collins movie credit is a “special thanks” note in Susan Seidelman’s She-Devil (1989). Based on a Fay Weldon novel, the revenge comedy stars Meryl Streep as a Jackie Collins-ish writer of “romance” novels having an affair with married accountant Ed Begley Jr. – whose overweight, slatternly, and ultimately dumped – wife, Roseanne Barr, decides to launch an all-out attack against him and his lover.

Did we mention that whenever Collins finishes a book (there have been nine now) she buys herself a little present, like that leopard-skin number ($800) she is wearing? That ring on your left hand, by the way, Jackie – can you lift your wrist to show it to us or shall we have the waiter run out for a crane? – that’s a rather serious bit of stone. Another little present? Oh, your engagement ring? From your first husband? Well then, dear, why didn’t you give it back?

The sort of reply you’d expect from someone whose sister is a star on Dynasty – half satiric, half fact.

“Because I married him. You don’t ask for the engagement ring back after you’ve married somebody.” 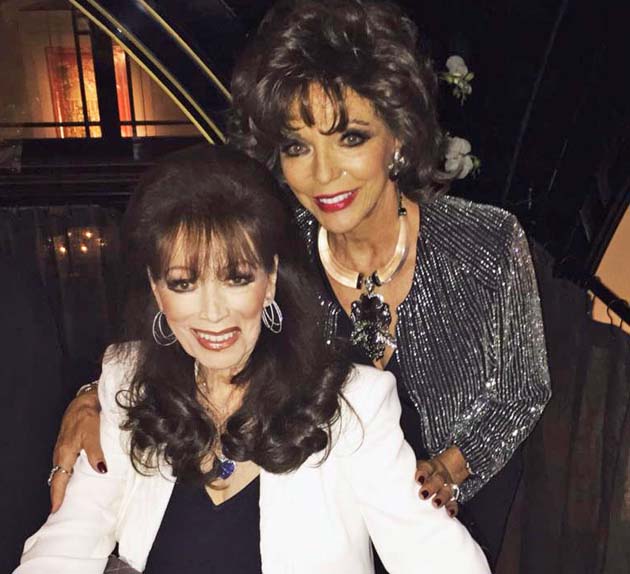 These include: Henry Koster’s The Virgin Queen (1955), opposite Bette Davis and Richard Todd; Richard Fleischer’s The Girl in the Red Velvet Swing (1955), opposite Ray Milland and Farley Granger; and David Miller’s The Opposite Sex (1955), in Joan Crawford’s old husband-stealing role in this a remake of George Cukor’s The Women, in which she gets whacked by June Allyson.

Also: Victor Vicas’ The Wayward Bus (1957), in a surprisingly effective dramatic performance opposite Jayne Mansfield and Rick Jason; and Leo McCarey’s Rally ‘Round the Flag, Boys! (1958), showing that even back then she could be a good comedienne, here opposite Paul Newman and Joanne Woodward.

As found on the IMDb, this year Joan Collins had a supporting role in Christopher N. Rowley’s Molly Moon and the Incredible Book of Hypnotism, featuring Raffey Cassidy, Emily Watson, and Dominic Monaghan.

She will next be seen in Roger Goldby’s The Time of Their Lives, currently in production. Pauline Collins (Shirley Valentine) – no relation – is set to co-star.

On her Twitter page, Joan Collins wrote, “Desperately sad today but I know Jackie would want me to be strong but it’s hard to lose somebody so wonderful, so incredible& loving.” She also posted several images of the two of them together.

‘Worst memory in the world’

Jackie and Joan Collins’ father was South African-born agent Joe Collins, whose list of clients included dancer Lew Grade (later a big-time television producer), Peter Sellers, Roger Moore, Shirley Bassey, Tom Jones, Vera Lynn, and, early in her career, Joan Collins, whom he also convinced to take on the role of Alexis Carrington in Dynasty. He died at age 85 in 1988 – according to reports, having never read any of Jackie Collins’ novels.

In 1984, Joan Collins published her book of memoirs, Past Imperfect. The Hollywood Wives author commented: “She has the worst memory in the world. I read it. I didn’t recognize anybody.”

Jackie Collins quote re: Barbara Cartland via the Chicago Tribune.