It’s always good to hear when a filmmaker is inspired by Woody Allen – as opposed to, say, Quentin Tarantino or Zack Snyder.

Case in point: First-timer James C. Ferguson, whose Happy Holidays (written by Ferguson and Tom Misuraca) is a three-way character study about old school friends who are reunited at their Connecticut hometown for a brief period right before Christmas. During that time, deeply buried emotions burst to the surface, old secrets are revealed, and one character ends up suffering a nervous breakdown. Old buddies can do that to you.

Shot in black in white during the course of two weeks, Happy Holidays features Paul Hungerford as Patrick Donovan, an openly gay man and avowed atheist who has had a difficult relationship with his father; John B. Crye as Alden J. Winslow III, the wry friend who has recently converted to Judaism because of a girl he’s been dating; and Thomas Rhoads as Kirby Chase, a family man and devout Catholic who is in town for his estranged father’s funeral and who, curiously, doesn’t seem to care all that much about lying, cheating on his wife, and other deadly (or semi-deadly) sins.

Filmmaker James C. Ferguson has kindly agreed to answer a few questions (via e-mail) about Happy Holidays for Alt Film Guide. See below.

By the way, Happy Holidays is currently available on iTunes, Indiepix, CinemaNow, Caachi and Eyesoda, and will be available on additional platforms soon.  Those interested in learning more about Happy Holidays may want to check out the film’s Facebook page.

The original script for Happy Holidays was actually the first thing I wrote out of college. At the time, it was about a trio of guys in their twenties. And it was horrid. The script was all about consumerism. Very trite. Do we really need another Christmas with the Kranks? Luckily, this time I wisely enlisted a writer who is much better than I am to assist me. Tom Misuraca is a great talent who has had all kinds of short stories published and is currently the co-producer at the theater group FirstStage L.A.

As for how the original nut came to be … hmmm … That’s an excellent question. I can’t speak to where the original three-guys-in-their-twenties version came from, because I just don’t remember. But I can say that this time – hang on – it was 9/11.

Let me see if I can explain:

There’s something about terrorism that, to me, is incredibly selfish. There’s also the idea that here are these people taking some good ideas, some nice ideas and completely corrupting them. I would argue that [someone like] Jerry Falwell is sort of in that same … Not that Mr. Falwell is a terrorist. But here is someone who has hijacked his religion for personal (in his case monetary) gain. So the idea for the movie sort of started there.

To me, Kirby and Alden represent a very simple, small version of those ideas. Here are two characters who are very selfish and very flawed – they’re manipulators. That idea fascinated me. It all sort of bloomed out from there. But we didn’t want to beat that idea over the head so we tried to just let it exist organically as part of these people’s lives. 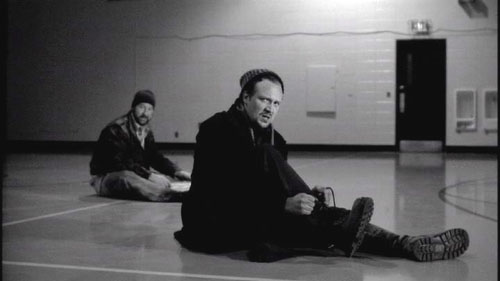 I overwrite; Tom scales back. (Not only is Tom a great writer, he’s a fantastic editor. ) I try to keep it grounded and conversational. And Tom takes out my bad jokes and puts in funny ones.

Lots of back and forth. Tom’s great to work with. He’s open to all kinds of ideas, but he always sort of keeps you on point. He was also a great voice of clarity while I was directing because, you know, as the director you’re dealing with a gazillion things and it’s easy to drift. I could always go to Tom with script questions and he was crystal clear. Which was a huge, huge help.

Most of the cast – and even Jim Stoddard, our producer – are writers as well. They all had really great script ideas and suggestions, too. John Crye wrote his monologue in the car at the very end, which I think is a great little speech. Tom Rhoads and Paul Hungerford both added jokes and lines throughout. Tom and Molly [Beck Ferguson] went off and pretty much rewrote the scene they’re in. They didn’t chuck it entirely, but they definitely played with it. And it works. That scene always gets huge laughs at screenings.

It was a true collaboration. And a lot of fun.

Paul Hungerford, John Crye and I all know one another from college (Emerson College in Boston) where we all performed sketch comedy. Tom Rhoads didn’t go to Emerson, but his best friend did so he was there all the time. Paul, Tom and I were in a sketch troupe in L.A. for a long time, and John Crye and Bill Daly (who plays Kevin, and is also an Emerson College graduate) had a two-man act who we sometimes double-billed with. So, we’ve all been hanging around performing together for years.

So, the honest answer is we wrote it for them. Paul’s a really good straight man, no pun intended. Tom’s the guy who walks in a room and everyone wants to talk to him – he’s very charismatic. And John’s favorite performer was Buster Keaton, who worked with a lot of negative space, which is the character Alden all over. He’s watching, listening, looming, reacting.

Tom was always my favorite person to play a scene with on stage. He just brings so much energy and fun and such a sense of play. As for Paul and John, they did a film together with Seann William Scott called Stark Raving Mad. The film went to DVD (check it out!), but I got to go to one of those test screenings they hold where they made an audience of total strangers fill out cards and talk about the movie. Anyway, in the film, John gets the most consistent laughs, while Paul gets the biggest single laugh. At that moment, I thought, “OK, they’re my friends, yes. But they’re also fucking fantastic. We have to do something together!”

I am a huge Woody Allen fan. I have a “top-five favorite Woody Allen films” list that’s constantly changing. Radio Days is one I adore. The Purple Rose of Cairo. Love and Death. As for other filmmakers … Billy Wilder. Anyone who can do The Fortune Cookie – which is essentially a “jokes” movie – and Double Indemnity which is horrifying – talk about range!

His Girl Friday [directed by Howard Hawks] is one I pop in regularly. Great dialogue. Also, the first four seasons of The West Wing. (The fourth season opener “20 Hours in America” is my personal favorite.)  The Kids in the Hall are also a huge influence. I like people movies, characters …

Now, despite all the chatter, Happy Holidays seems to be more about miscommunication – or even a total lack of communication – than about people verbally communicating with one another. Would you agree?

I’m going to take a polite pass on this question. Mainly because, I don’t know, I like it when people see a film and have a reaction to it. I kind of think their reaction is their reaction, you know?  It might not be my reaction, but it’s no less correct or important or justified. It’s sort of a “no wrong answer” kind of situation. I think that’s one of the cool things about the medium. I don’t want to tell people what to think or make them second guess what they’re already thinking.

Sticking to the lack of communication subject matter, and without giving anything away, what do you have to say about the father-son relationship found in Happy Holidays?

All you have to do is watch Lost to realize that most men, apparently, have issues with their fathers. This is a very personal part of the story for both Tom and I. I wouldn’t want to try and speak for Tom, but for me, well, look … I grew up in New England. We’re a stoic bunch. Terrible communicators. And sometimes that … aloofness makes it difficult to forge any kind of a deep relationship.

I can say, however, that we tried really hard to make our story, um, honest. We didn’t want to take sides. We worked really hard on that part of it.

… I think if I keep going I’ll start giving stuff away, so I’ll just leave it at that.

Yes. We are trying very hard to get another movie going. We shot Happy Holidays in 14 days for pennies. I would love the opportunity to take what I did with that film, correct my mistakes and give it another go-round. We have a bunch of irons in the fire, but we need to find some money somewhere to get us going. And the way things are financially these days, that is not easy. But I remain hopeful.

The frontrunner is a Shaun of the Dead-esque creature feature satire/comedy. Because, when you think of small, black and white, people-in-rooms-talking movies, you think of blood and monsters, right?

The Talmadge Sisters Norma & Constance: Silent Era Stars Are Back!

I saw this film, and I thought the acting was wonderful! There is also a really special quality to the way this film was shot. I’m not a huge fan of modern black and white, but I kept thinking, “This is beautiful. What camera was used to shoot this movie? It looks GREAT!”

Although I might have edited down a couple of the scenes (sorry), I found the dialogue and tension in others to be fascinating; and some were even riveting, to the point of leaning forward towards the screen!

I am now a Paul Hungerford FAN. He’s got the mojo that many actors would sell their soul for. His timing is fabulous. The other actors are good, and shine in various moments, but PH always held my eye.

As far as director, James Ferguson? I’ll be waiting to see anything he is doing next.