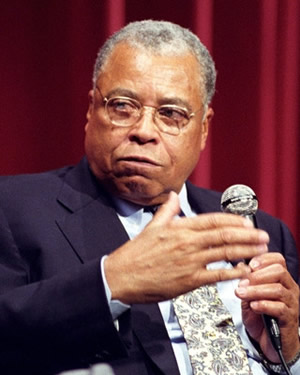 Actor James Earl Jones and make-up artist Dick Smith will receive Honorary Awards, and former television hostess Oprah Winfrey will receive the Jean Hersholt Humanitarian Award, the Academy of Motion Picture Arts and Sciences has announced. The awards will be presented at the Academy’s 3rd Annual Governors Awards dinner on Saturday, Nov. 12, at the Grand Ballroom at Hollywood & Highland Center. The information below on Jones, Smith, and Winfrey is from the Academy’s press release:

At the 2009 SAG Awards ceremony, the recipient of the Screen Actors Guild Life Achievement Award was veteran film, television, and stage actor James Earl Jones, whose big-screen credits range from a supporting role in Stanley Kubrick’s Dr. Strangelove (1964) to providing the voice of Darth Vader in the early Star Wars movies (Star Wars, 1977; The Empire Strikes Back, 1980; The Return of the Jedi, 1983).

Along the way, Jones received a Best Actor Academy Award nomination for Martin Ritt’s The Great White Hope (1970), and was seen in movies as varied as John Boorman’s Exorcist II: The Heretic (1977), John Milius’ Conan the Barbarian (1982), Phil Alden Robinson’s Field of Dreams (as a fictionalized J.D. Salinger type), and John McTiernan’s The Hunt for Red October (1990), in addition to having his booming voice heard in Roger Allers and Rob Minkoff’s blockbuster The Lion King (1994) and, once again providing the means for Darth Vader to vocalize his feelings, George Lucas’ Star Wars: Episode III – Revenge of the Sith (2005).

Known as the “godfather of make-up,” Dick Smith began his career in 1945 as NBC’s first make-up man. He is known for his make-up artistry on such films as The Godfather, The Exorcist and Taxi Driver. In 1984 he won an Oscar for his work on Amadeus, and received a nomination for Dad (1989). As an educator, Smith helped train many of today’s Academy Award-winning and nominated make-up artists including Rick Baker, Greg Cannom, Kevin Haney, Kazuhiro Tsuji, Mike Elizalde and Carl Fullerton.

Since receiving her Oscar nomination for her debut film performance in The Color Purple, actress, television host and producer Oprah Winfrey has gone on to establish herself as one of the most influential figures in entertainment and philanthropy. She has been especially dedicated to supporting educational initiatives and raising awareness of issues that affect women and children, both in the United States and around the globe. Her philanthropic efforts have included Oprah’s Angel Network, the Oprah Winfrey Foundation, and the Oprah Winfrey Leadership Academy for Girls, which opened in South Africa in 2007.

The Honorary Award, a.k.a. Honorary Oscar, is given to an individual for “extraordinary distinction in lifetime achievement, exceptional contributions to the state of motion picture arts and sciences, or for outstanding service to the Academy.” Named after actor and former Academy president Jean Hersholt, the Jean Hersholt Humanitarian Award, also an Oscar statuette, is given to “an individual in the motion picture industry whose humanitarian efforts have brought credit to the industry.”

The Governors Awards presentation will be produced for the Academy by writer-director Phil Alden Robinson with Charlie Haykel and Juliane Hare of Don Mischer Productions.

Aug. 4 update: The Academy of Motion Picture Arts and Sciences’ decision to hand Oprah Winfrey a Jean Hersholt Humanitarian Award at the November 12 Governors Ball ceremony, has been widely criticized. Some have remarked that Winfrey, rumored as a possible host for the 2012 Oscarcast, is a television – not a film – personality. Others have complained that Winfrey doesn’t deserve the Humanitarian Award, period.

Academy president Tom Sherak came to Winfrey’s defense, affirming that the billionaire (estimated net worth $2.7 billion in 2009) former talk-show hostess is “one of the most philanthropic performers in the world,” having, as per Sherak, contributed more than $500 million to charitable causes. “She’s a member of the academy,” Sherak added, “she was nominated for an Academy Award [in the Best Supporting Actress category for Steven Spielberg’s The Color Purple] and she has produced movies. This is not about personality. This is about a person who has come from the depths, risen to the heights and given back. That’s a perfect example of why this award was created.”

Unlike the Academy Awards’ competitive categories, the Academy’s honorary awards usually have been devoid of controversy. Even so, there have been a few instances when the selections of the Academy’s Board of Governors were less than well-received.

Three years ago, the announcement that Jerry Lewis would receive the Jean Hersholt Humanitarian Award led to an outcry against the choice of the comedian/muscular dystrophy advocate for both his repeated anti-gay slurs and what some perceived as his condescending views on those suffering from the disability.

Charlton Heston’s Jean Hersholt Award at the 1979 ceremony didn’t stir up trouble because at the time Heston wasn’t known as a far-right National Rifle Association supporter. On the other hand, the Honorary Award given to Elia Kazan, a two-time Best Director Oscar winner and an unrepentant collaborator with the House Un-American Activities Committee, became a major issue for the Academy. There were calls for boycotting the Oscar ceremony, and a number of those present at the 1999 Oscarcast – Nick Nolte, Amy Madigan, and Ed Harris among them – refused to applaud when Kazan showed up onstage to accept his statuette.

The Jean Hersholt Humanitarian Award is supposed to be given to individuals with an “extraordinary distinction in lifetime achievement, exceptional contributions to the state of motion picture arts and sciences, or for outstanding service to the Academy.” Oprah Winfrey is only the sixth woman to receive the Jean Hersholt Award since the periodic award was instituted in 1957, following actresses Martha Raye (at the 1969 ceremony), Rosalind Russell (1973), Elizabeth Taylor (1993), and Audrey Hepburn (1993), and former Paramount chairman Sherry Lansing (2007).

Brett Ratner and Don Mischer will produce the 2012 Academy Awards telecast, Academy of Motion Picture Arts and Sciences president Tom Sherak announced today. Ratner is an Oscarcast newcomer, while Mischer will be returning after this year’s Emmy-nominated show, considered by some to be one of the worst ever in Oscar history. (Bruce Cohen was the show’s co-producer.) Don Mischer Productions will also be partially handling the Governors Ball ceremony in November.

This year’s Oscar ceremony was hosted by James Franco and Anne Hathaway. Oprah Winfrey was rumored to be a possibility for next year’s Oscar show; earlier this week, Winfrey was announced as the 2011 recipient of the Jean Hersholt Humanitarian Award.

The following biographical information on Brett Ratner (Rush Hour, Red Dragon, After the Sunset, X-Men: The Last Stand) and Don Mischer is from the Academy’s press release:

Ratner’s work spans movies, including eight features; numerous television series; over 100 music videos; and a multitude of commercials. A native of Miami Beach, he is a graduate of NYU’s Tisch School of the Arts, where he now serves on the Dean’s Council. He also serves on the Board of Trustees of Simon Wiesenthal Center. Ratner’s next directorial release is Tower Heist, due out in November, and he will soon begin directing 39 Clues for DreamWorks, based on the popular young-adult book series published by Scholastic, as well as Hercules: The Thracian Wars for MGM. Ratner’s film producing credits include Horrible Bosses, currently in release, as well as an upcoming adaptation of Snow White, in which Julia Roberts will play the Queen.

Additionally, Ratner has produced documentaries about the legendary photographer Helmut Newton and the actor John Cazale, and he executive produced the documentary Catfish as well as the upcoming Seriously Funny – The Comic Art of Woody Allen, which will debut on PBS in November as a two-part installment of the American Masters series.

In addition to the 83rd Academy Awards, Mischer’s producer/director credits include “We Are One: The Obama Inaugural Celebration at the Lincoln Memorial,” “The Kennedy Center Honors,” several Super Bowl half-time shows and the opening ceremonies of both Winter and Summer Olympic Games. He has also produced specials with a wide range of musical performers, including Bruce Springsteen, Beyoncé, Bono, Barbra Streisand, Justin Timberlake and Yo Yo Ma. Among the many honors he has earned are 15 Emmy Awards, 10 Directors Guild of America Awards, two NAACP Image Awards and a Peabody Award.

The 2010 Academy Awards ceremony will take place on Sunday, Feb. 26, 2012, at the Kodak Theatre at Hollywood & Highland Center. In the US, the Oscarcast will be televised live on ABC.

The Blind Side Box Office: Sandra Bullock in Year’s Biggest...