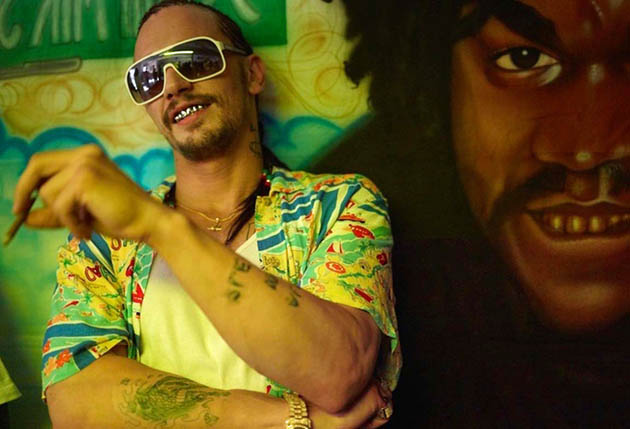 The Los Angeles Film Critics Association (LAFCA) announced earlier today, Dec. 8, their list of 2013 winners and runners-up. As usual, there were a number of surprises, chiefly among them James Franco (see below) and Shane Carruth’s little-seen sci-fi indie drama Upstream Color, selected as the runner-up for Best Editing. (Check out the full list of Los Angeles Film Critics winners further below.)

A Best Actor Academy Award nominee for Danny Boyle’s 2010 drama 127 Hours and one of the co-hosts (with Anne Hathaway) of one of the most widely lambasted Oscar ceremonies ever, Franco tied with Jared Leto (see further below) in the Best Supporting Actor category.

With nearly $32 million worldwide, as per Boxofficemojo.com, the film has turned out to be a modest commercial success in relation to its (reported) $5 million budget (not including marketing and distribution expenses).

James Franco’s fellow winner was Jared Leto, who plays an HIV-positive trans woman in Jean-Marc Vallée’s real-life-inspired AIDS comedy-drama Dallas Buyers Club – which recently (may have) caused a furor at a Frozen screening in Florida.

A previous tie in the Best Supporting Actor category took place in 1998, when Bill Murray (Rushmore & Wild Things) and Billy Bob Thornton (A Simple Plan) were both singled out. 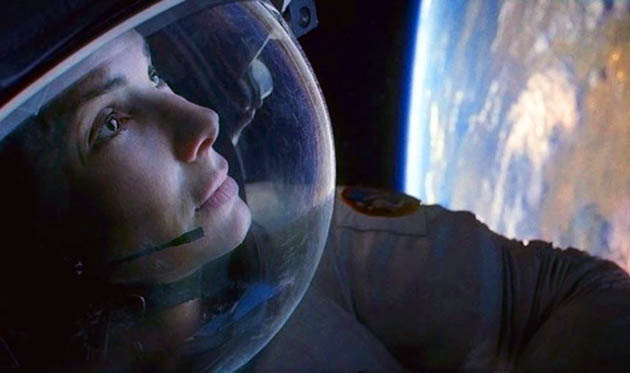 Sandra Bullock in Gravity. A surprisingly mainstream favorite at the 2013 Los Angeles Film Critics Awards, Alfonso Cuarón’s Earth orbit-set adventure drama Gravity stars Sandra Bullock and George Clooney as two U.S. astronauts whose space shuttle is destroyed by debris from a Russian satellite – which goes to show that human trash is a danger to survival even in outer space. The duo must then find a way to remain alive in their gravity-, air-, food-, and water-less environment until they find a way back home. The cliché-ridden screenplay, notable only in that it focuses on the female character’s ingenuity (and boundless luck), was written by Cuarón and his son, Jonás Cuarón.

But really, the biggest surprise of all was that the Los Angeles Film Critics came up with no less than three ties. Besides two Best Supporting Actor winners, there were also two Best Actresses (more details further below) and, most notably, two Best Pictures: Alfonso Cuarón’s Gravity and Spike Jonze’s Her.

That’s the LAFCA Awards’ first Best Picture tie since its very first year, when Milos Forman’s One Flew Over the Cuckoo’s Nest tied with Sidney Lumet’s Dog Day Afternoon back in 1975.

Sandra Bullock, touted as a potential Best Actress Oscar nominee, and George Clooney star in this handsome but conventional Warner Bros.-distributed Hollywood flick that has become a worldwide commercial and critical hit – however absurdly, Gravity has even been compared to Stanley Kubrick’s 2001: A Space Odyssey. The screenplay was penned by Cuarón and his son, Jonás Cuarón.

In the film, Joaquin Phoenix plays a lonely, introverted man who begins a relationship of sorts with a computer operating system voiced by Scarlett Johansson. Amy Adams, Kristen Wiig, Chris Pratt, and Olivia Wilde are some of Her‘s other players.

For those who see this LAFCA Best Picture tie as some sort of Oscar Omen:

Just bear in mind that neither Gravity nor Her has any chance whatsoever of repeating One Flew Over the Cuckoo’s Nest‘s Oscar feat.

Nearly as eye-popping as the James Franco tattoos, was the Los Angeles Film Critics’ choice of Best Animated Feature: Stéphane Aubier, Benjamin Renner, and Vincent Patar’s French-Belgian co-production Ernest & Celestine, about the unlikely friendship between a mouse and a bear, and the rejection they must endure from species-conscious mice and bears.

The LAFCA’s runner-up was Hayao Miyazaki’s The Wind Rises, the National Board of Review and the New York Film Critics’ winner.

So far this awards season, animated Hollywood movies – e.g., Frozen, Cloudy with a Chance of Meatballs 2, The Croods – no matter how successful at the North American box office, have been summarily bypassed. 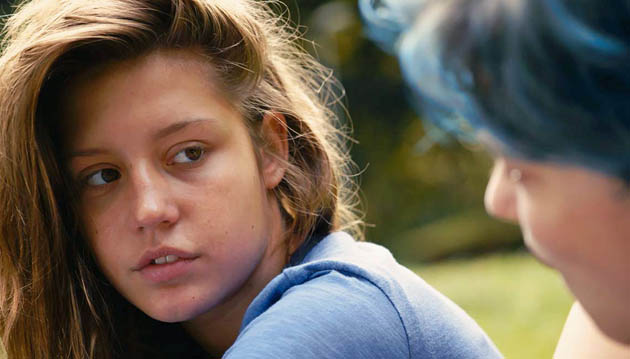 Adèle Exarchopoulos in Blue Is the Warmest Color, with Léa Seydoux. Because of its long and near-explicit lesbian sex scenes, Abdellatif Kechiche’s Palme d’Or-winning Blue Is the Warmest Color has stirred up quite a bit of controversy, including accusations that the director – much to his ire – exploited his two actresses. Clearly, the Los Angeles Film Critics felt otherwise, as they have chosen Kechiche’s coming-of-age drama as their Best Foreign Language Film. Besides, co-star Adèle Exarchopoulos was one of their Best Actress winners – the other one was the more Hollywood-friendly Cate Blanchett for another movie with “blue” in the title, Woody Allen’s Blue Jasmine.

As it happens, Blue Is the Warmest Color, which was also named the New York Film Critics Circle’s Best Foreign Language Film, can’t be shortlisted in that Academy Award category due to eligibility issues. France’s Oscar submission this year was Gilles Bourdo’s Renoir.

At the LAFCA, blue was also the luckiest color, at least in the Best Actress category: Cate Blanchett was Exarchopoulos’ co-winner, for her performance in Woody Allen’s Blue Jasmine, in which she plays a character somewhat similar to A Streetcar Named Desire‘s Blanche Dubois – a role that earned Vivien Leigh the Best Actress Academy Award back in early 1952.

Emmanuelle Riva, in movies since the late 1950s (e.g., Alain Resnais’ Hiroshima Mon Amour), went on to receive her first Best Actress Oscar nomination. But Jennifer Lawrence – young, a former model, and the star of Gary Ross’ blockbuster The Hunger Games – turned out to be the eventual winner.

Adèle Exarchopoulos may be young and pretty, but she has two major disadvantages when it comes to winning – or even being nominated for – an Oscar:

a) Unlike Cate Blanchett and other likely nominees (e.g., Sandra Bullock, Judi Dench) she’s not Hollywood (or even marginally Hollywood).

b) Academy members generally have an aversion to films dealing with sex (e.g., Lust, Caution; Shame).

Of course, the non-Hollywood Emmanuelle Riva did at least land a nomination. So, despite all the lesbian sex, Exarchopoulos does have a chance.

As for Cate Blanchett, she’s not only a shoo-in nominee but also the likely winner. If so, that’ll be her second Oscar statuette, following her win in the Best Supporting Actress category for Martin Scorsese’s The Aviator (2004), in which she plays multiple Oscar winner Katharine Hepburn.

Here are the other LAFCA ties in the Best Actress category:

Of these, only Andie MacDowell and Ally Sheedy failed to be shortlisted for the Academy Awards.

Since 1990, only six LAFCA Best Actress winners have failed to receive an Academy Award nomination; four of these were performers in non-American films, three of which in a language other than English. Here are the six actresses:

Oscar eligibility may have been an issue with some of these titles. 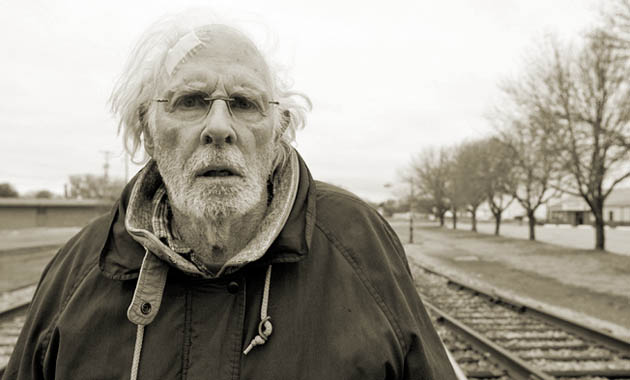 Bruce Dern in Nebraska: Best Actor at the Los Angeles Film Critics Awards. Shot in black and white (by Phedon Papamichael) from a screenplay by Bob Nelson, Alexander Payne’s road movie Nebraska stars veteran Bruce Dern – whose career dates back to an uncredited small role in Elia Kazan’s Wild River – as an elderly, hard-drinking Billings, Montana, resident traveling with his estranged son (Will Forte) to Lincoln, Nebraska, so they can claim a million-dollar sweepstakes prize the elderly man believes he has won.

Something similar happened at the New York Film Critics awards, as 77-year-old Robert Redford was their Best Actor for J.C. Chandor’s All Is Lost – the veteran Redford’s first-ever NYFCC win.