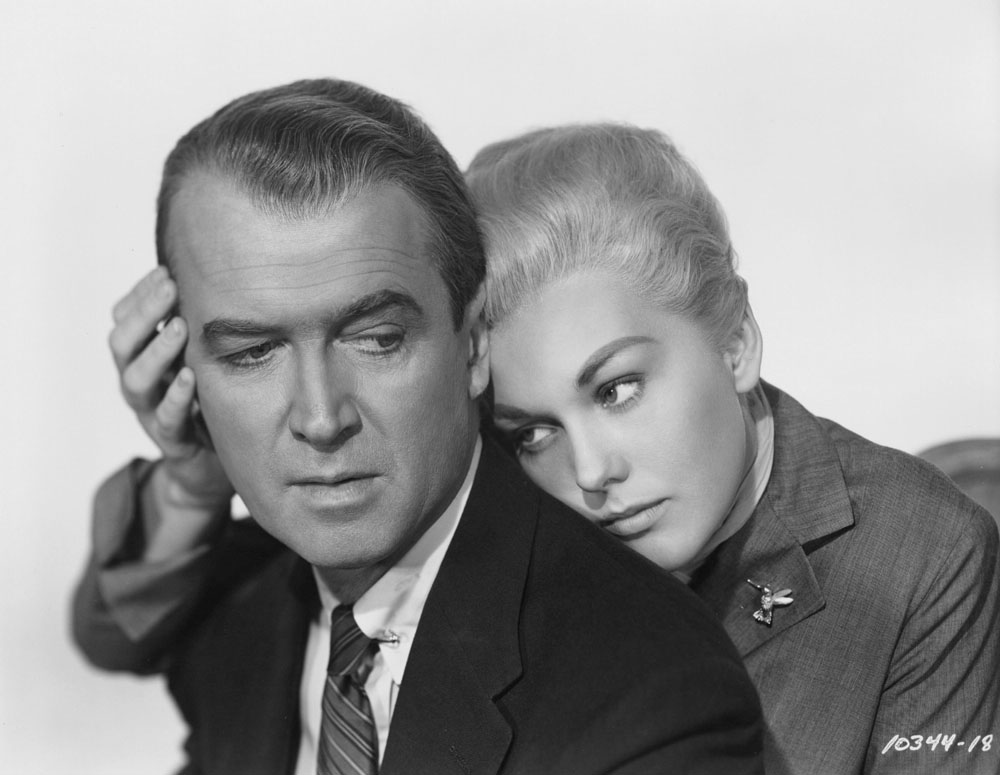 The Academy of Motion Picture Arts and Sciences’ upcoming centennial tribute to James Stewart will feature film clips and onstage conversations with Stewarts’ friends and colleagues, among them Shirley Jones, Ann Rutherford and Carroll Baker, as well as Stewart’s two daughters. “A Centennial Tribute to James Stewart” will be held on Thursday, June 12, at 8 p.m. at the Samuel Goldwyn Theater in Beverly Hills.

Stewart is hardly one of my favorite actors. I’ve always found his “averageness” calculated, a synthetic carbon copy of the work performed by, say, Gary Cooper or, in earlier times, Richard Barthelmess. Stewart’s casting in Anthony Mann’s 1950s Westerns lessened the films in question (though they reportedly made Stewart a very wealthy man), and the same goes for his starring roles in Alfred Hitchcock’s psychological thrillers.

In fact, one of my chief problems with both Rear Window (1954) and Vertigo (1958) is that not for a second could I believe that Grace Kelly, Barbara Bel Geddes, or Kim Novak would want to be near – let alone lust after – Stewart’s heroes. (Deborah Kerr would have been infinitely more believable in Stewart’s shoes, but that would have been a bit too avant-gardish even by today’s standards.)

Needless to say, many feel otherwise. James Stewart had a long – about four decades – and distinguished film career, working with top directors, screenwriters, and co-stars. He also remains one of the best-remembered performers of the studio era.

Born on May 20, 1908, in Indiana, Pennsylvania, Stewart began acting after receiving a degree in architecture from Princeton University. Initially an MGM contract player, he was paired with several of the studio’s leading ladies, including Eleanor Powell (to whom he croaks Cole Porter’s “Easy to Love” in the 1936 musical Born to Dance), Margaret Sullavan, Rosalind Russell, Katharine Hepburn, and Hedy Lamarr.

Among Stewart’s most popular films of the era, some on loan to other studios, are the Academy Award-winning You Can’t Take It with You (1938), with Jean Arthur and Lionel Barrymore; the amusing Vivacious Lady (1938), with Ginger Rogers; Mr. Smith Goes to Washington (1939), also with Jean Arthur; Destry Rides Again (1939), in which Stewart is overshadowed by Marlene Dietrich; The Philadelphia Story (above), opposite Katharine Hepburn, Cary Grant, and Ruth Hussey; and The Shop Around the Corner (1940), with Margaret Sullavan.

Upon his discharge from World War II military service, Stewart starred for Frank Capra in the Christmas staple – and diabetes-inducing – It’s a Wonderful Life (1946), in addition to Henry Hathaway’s docudrama Call Northside 777 (1948), and several well-regarded Anthony Mann Westerns, including Winchester 73 (1950), The Naked Spur (1953), and The Man from Laramie (1955).

Over the course of his career, Stewart received five Academy Award nominations in the best actor category: for Mr. Smith Goes to Washington (1939); The Philadelphia Story (1940), winning the Oscar that should have gone to co-star Cary Grant; It’s a Wonderful Life (1946); Harvey (1950); and Anatomy of a Murder (1959).

The last two are probably Stewart’s finest performances. In Henry Koster’s Harvey, he plays a sweet-as-pie dimwit whose companion is an invisible, giant white rabbit. (If that “lovable” character approached me at night to ask if I wanted to check out his “big white rabbit,” I’d run for cover – and he shouldn’t be allowed near any schools, either.) In Otto Preminger’s groundbreaking Anatomy of a Murder, Stewart is a scuzzy attorney defending an appropriately perverse Ben Gazzara.

In 1984 the Academy gave Stewart an Honorary Award, with a citation that read, “To James Stewart, for his fifty years of memorable performances. For his high ideals both on and off the screen. With the respect and affection of his colleagues.”

Tickets to “A Centennial Tribute to James Stewart” are $5 for the general public and $3 for Academy members and students with a valid ID. The Samuel Goldwyn Theater is located at 8949 Wilshire Boulevard in Beverly Hills. For additional information, visit www.oscars.org or call (310) 247-3600.

Also, in conjunction with the tribute, the UCLA Film & Television Archive presented a retrospective Stewart screening series at the Billy Wilder Theater in Westwood. For more information, please call the Archive at (310) 206-8013 or visit www.cinema.ucla.edu.

Sigh… I had hoped to become more like Elwood P. Dowd, for if he were crazy, at least his craziness didn’t involve serial killing. But you have shown me reality, so I must return to my drab normal life, as I would not want to become a pain on society.

Lusting after? Is that all you guage a fine actor and a great American by?
Average? We all need to set our sights on being so average. I guess I’m from a different era. I’m glad of it too. I wish I could have been this mans friend.
(p.s. as you pretend to be a writer, it’s an MGM…, not a MGM…! Kids!?)

Hmm.. It’s remarkeable that Stewart did all those things and was born in 2008!