James Whitmore, the Oscar-nominated and Emmy- and Tony-winning actor whose career spanned six decades, died of lung cancer at his Malibu home yesterday, Feb. 6., ’09. He was 87.

Though never an actual film star, throughout the years Whitmore worked for numerous top directors, ranging from William A. Wellman and John Huston to Ingmar Bergman and Frank Darabont. Whitmore also happened to be the only actor to have been nominated for an Academy Award for a film in which he was the sole cast member: Give ’em Hell, Harry!, the 1975 cinematic adaptation of his long-running one-man show (written by Samuel Gallu) about the life of US president Harry Truman.

Born on Oct. 1, 1921, in White Plains, N.Y., Whitmore began his Broadway career as a tough-talking sergeant in William Wister Haines’ 1947 drama Command Decision, for which he received a Tony. Although he failed to reprise his role in MGM’s 1948 film version – which went to one of the studio’s top stars, Van Johnson – Whitmore did play a similar character in another MGM production, Battleground, a generally well-regarded – personally, I find it appallingly conventional – 1949 World War II melodrama directed by William A. Wellman.

At about that time, MGM signed Whitmore, reportedly in an attempt to turn him into a younger Spencer Tracy. Whitmore, however, never reached Tracy’s heights at the box office, perhaps because the MGM of the 1950s was no longer the studio behemoth of two decades earlier. Or perhaps because of MGM’s choice of vehicles for its emerging talent: the studio usually opted to give Whitmore bigger roles in B movies – e.g., the so-horrendous-it’s-hilarious The Next Voice You Hear (1950), in which God talks to humankind on the radio; the moderately enjoyable crime comedy Mrs. O’Malley and Mr. Malone (1950), opposite Marjorie Main; Shadow in the Sky (1952), supporting Ralph Meeker; the Mario Lanza musical Because You’re Mine (1952) – while placing the actor further down the cast list in bigger films – e.g., the film noir The Asphalt Jungle (1950), starring Sterling Hayden; the melodrama Please Believe Me (1950), starring Deborah Kerr; and the musical Kiss Me Kate (1953), starring Howard Keel and Kathryn Grayson.

As his film career stalled in the mid-1950s, Whitmore began working on television. His countless TV appearances range from The Law and Mr. Jones (1960-1962), in which he starred as a lawyer named Abraham Lincoln Jones, to a guest stint in CSI: Crime Scene Investigation. In 2000, he received an Emmy for his guest actor performance in the series The Practice. 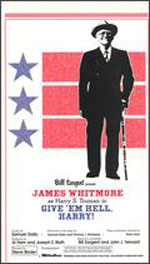 In addition to Give ’em Hell, Harry!, Whitmore also received rave notices for his two other one-man shows: Will Rogers’ U.S.A. (1974), about the folksy actor-humorist, and Bully (1977), in which he played U.S. president Theodore Roosevelt.

Whitmore, in fact, much preferred working on stage. “I find the process of making movies absolutely boring,” he told a reporter in 1994. “It’s so fragmented. You wait and wait and wait and then, look, as Jack Lemmon says, ‘It’s magic time.’ In the theater, once the curtain goes up, the actor is in charge.”

Among Whitmore’s (relatively) recent film appearances are those in Frank Darabont’s The Majestic (2001), with Jim Carrey; Peter Hyams’ The Relic (1997); the Barbra Streisand vehicle Nuts! (1987), playing a judge; and the crime drama The First Deadly Sin (1980), starring Frank Sinatra. 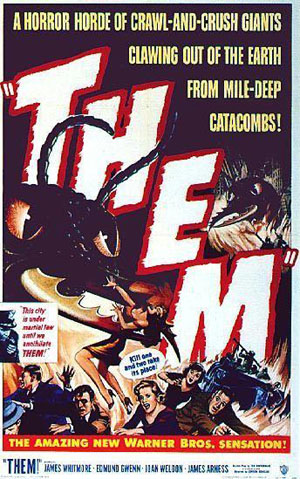 According to journalist Bob Thomas, Whitmore’s favorite among his films is Carl Lerner’s Black Like Me (1964) – which I haven’t seen – a tale inspired by actual events in which white reporter John Howard Griffin used medication to blacken his skin so as to experience life as a black man in the American South.

Recently, Whitmore supported Barack Obama for the US presidency, telling the crowd at a 2007 rally at Universal Studios’ Gibson Theatre that Obama had the wisdom “to deal with a very, very confused and complex country, and the world.” Additionally, last year he appeared in TV commercials for the First Freedom First campaign, which advocates religious liberty and the preservation of the separation of church and state.

Baby Marie: One of Earliest Child Movie Stars Has Died

Sirs - I have looked at only a couple of sites, but NO mention of his role in The Eddy Duchin Story, as support/Manager to Eddy Duchin ?!
This movie means a GREAT deal to me (hence my email address!) and I treasure his role very much, but of course it was Tyrone Power and Kim Novak who remain uppermost in my memory, and love, of this truly emotional true story!
However, as Tyrone Power died all too early, and I don’t know if Kim Novak is still with us, it has always been ’emotional’ for me whenever I saw James Whitmore on screen, to remind me of Eddy Duchin!!
Very sad when he died earlier this year - I had tried to make contact with him, but never could.
However I did make contact briefly with Eddy Duchin’s son, Peter - what a joy and privilege!!
Greetings and love to James Whitmore’s family - from Graham - Southampton - England