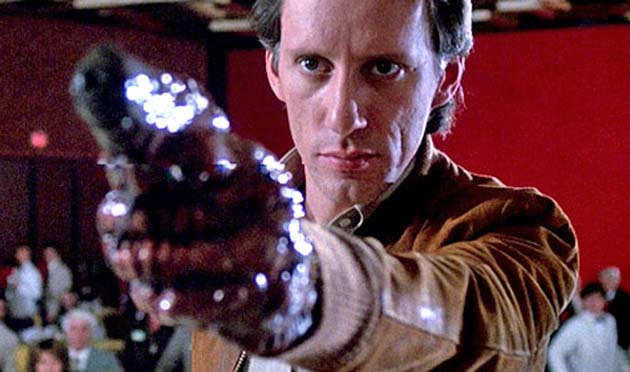 In a letter dated Aug. 21, Twitter attorney Ryan Mrazik ridiculed Surf’s Up and Scary Movie 2 actor James Woods, while also highlighting the potentially dangerous precedent of a $10 million lawsuit the 68-year-old entertainer filed against a Twitter user last July. The lawsuit was followed by a subpoena demanding that the social media giant reveal the user’s identity and that of another user with whom Woods has been embroiled in the (generally) no-holds-barred Twitterverse.

In case you’re unfamiliar with the name, these days the two-time Oscar-nominated Woods is best known for a supporting role as a right-wing sociopath in Roland Emmerich’s thriller White House Down, starring Channing Tatum and Jamie Foxx (as a liberal-minded U.S. president despised by Woods’ character), and for his relentless, inflammatory Twitter attacks on U.S. President Barack Obama (whom he has referred to as a “true abomination”), U.S. Democratic presidential hopeful Hilary Clinton, and “liberals” in general (e.g., “Scratch a liberal, find a fascist every time”)[1] – much to the delight of the far-right elements in the American media and of his numerous racist, gun-loving, anti-gay, anti-women’s rights, climate change-denying, Christian extremist followers. (Check out some of their Twitter profiles.)

One recent Woods tweet, for instance, featured the caption “How to give a liberal a coronary,” and below it an image of far-right Republican presidential hopeful Donald Trump wearing a police uniform while atop a Cecil the lion look-alike and, behind him, the Confederate flag – a proud symbol of racism and the good old days of slavery in the American South. To date, this particular tweet has been retweeted 715 times and favorited another 994 times.

In December 2014, Woods, who has referred to Muslims as “towel-heads,” tweeted the following: “I was so moved by Obama’s Christmas message today from the steps of his church. He finally put all those nasty Muslim rumors to rest,” followed by, “Oh, wait…”

The meaning of the word ‘hyperbole’

During a political argument, the former tweeted the following about the actor who voiced one of the characters in The Easter Egg Adventure: “cocaine addict James Woods still sniffing and spouting.” The latter tweeted that he was a “notorious coke fiend and registered sex offender.” (It’s unclear whether the tweet was directed at Emerson’s followers – currently totalling 901 – or at Woods himself; in the latter case, contrary to what his attorneys claim, only the actor and/or mutual Emerson / Woods followers, if any, would have been able to see it on their timelines.)

The speech at issue appears to be opinion and hyperbole rather than a statement of fact. Further, the target of the speech is a public figure who purposefully injects himself into public controversies, and there has been no showing of actual malice. Attempts to unmask anonymous online speakers in the absence of a prima facie defamation claim are improper and would chill the First Amendment rights of speakers who use Twitter’s platform to express their thoughts and ideas instantly and publicly, without barriers.

After all, however untrue or nasty the Twitter remarks about James Woods (more on the possible reason for the cocaine jokes at the bottom of this article), bear in mind that Woods has no qualms when it comes to using similar tactics to attack others who disagree with his sociopolitical views. 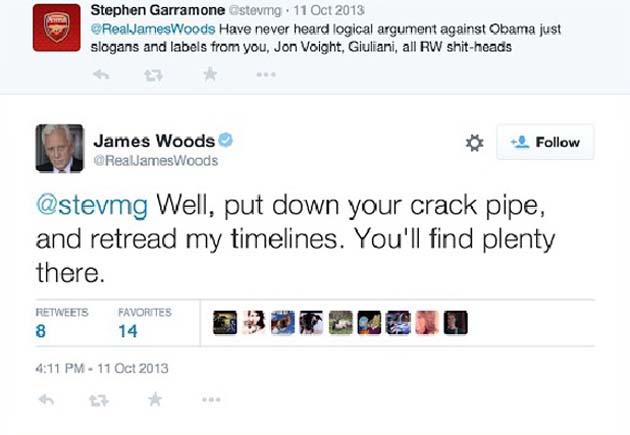 Elsewhere on Twitter, as found in a court filing by “Abe List” (“John Doe”) attorney Kenneth White (uploaded to Scribd. by The Hollywood Reporter‘s Eriq Gardner), Woods wrote: “I wouldn’t want you to spend your precious crack allowance being enlightened.” That particular tweet received 71 retweets and 135 favorites.

As stated in the court filing, Woods “apparently believes that while he can say that sort of thing to others, others cannot say it to him.”

Elsewhere, the brief argues the following:

It is axiomatic that only provably false statements of fact can be defamatory. Mere rhetorical hyperbole not meant to be taken literally cannot be, and is absolutely protected by the First Amendment. In the context of Twitter – specifically including Plaintiff’s own penchant for hyperbole there – Mr. Doe’s statement cannot be taken as a factual assertion that Plaintiff is a “cocaine addict.” Rather, Mr. Doe’s tweet was part of a familiar “meme,” or in-joke, referring to Plaintiff that way as an insult.

In fact, a July 30 tweet by another user reads: 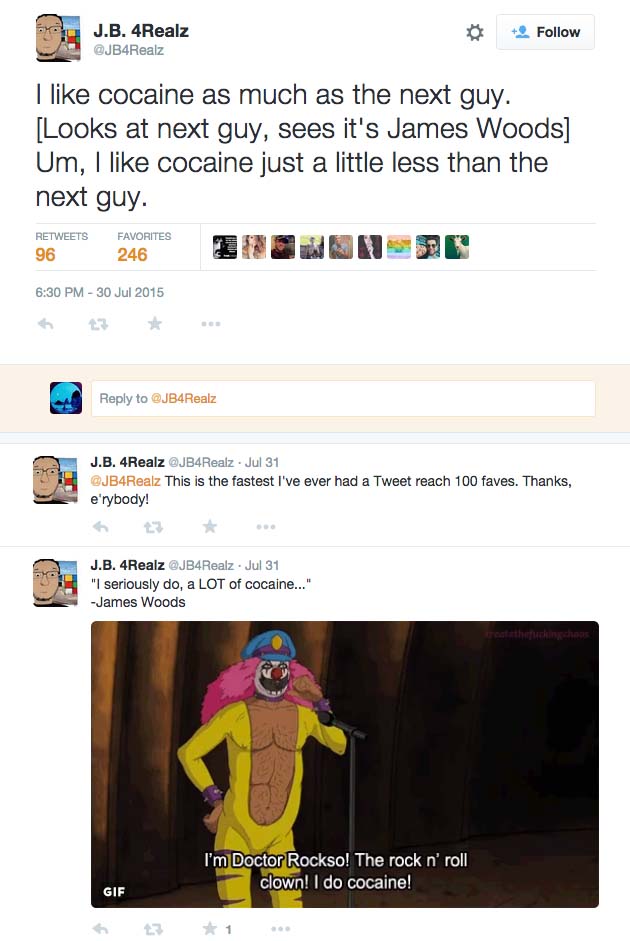 Twitter refuses to reveal name of user who called James Woods a coke addict, so we can never buy him/her a drink for trolling Woods.

If you do a Twitter search for “James Woods coke” you’ll find tons of tweets mocking the rant-prone right-wing entertainer. There’s even a Twitter account named “James Woods’ Coke,” featuring his Twitter profile image with a white smudge – not milk – above his upper lip.

According to James Woods’ attorneys, he has filed the multi-million dollar lawsuit to stop “[Abe List], and anyone else using social media to propagate lies and do harm.”

We’ve been slammed and smacked and twittered a lot by the anti-Israeli side. All I can say is: anything worth doing is worth overdoing. So we decided to add a concert.

Above the meme, Woods added, “I’ve always loved @RollingStones, and now more than ever…” The tweet has received 613 retweets and 868 favorites.

Despite reports to the contrary, the “Abe List” Twitter account – 2,272 followers vs. James Woods’ 249,000 – doesn’t appear to have been suspended. His tweets are now private (only his followers can see them), while his public profile reads:

The judge handling the James Woods lawsuit has scheduled an Oct. 2 hearing.

[1] So, are liberals the ones who, once scratched, reveal the fascist within?

That’s how Mussolini got started. He was trying to expand the Italian SCHIP [U.S. health program to help uninsured children from low-income families] and someone scratched him and then WWII.

Although hardly known for coming up with subtle characterizations, James Woods’ performance in Oliver Stone’s Salvador (1986) earned him quite a bit of praise. He lost the Best Actor Oscar to sentimental favorite Paul Newman in Martin Scorsese’s The Color of Money. (The anti-Salvador commentary by The Guardian contributor Alex von Tunzelmann is a must-read.)

Other James Woods movies, mostly featuring the actor in supporting roles, include: 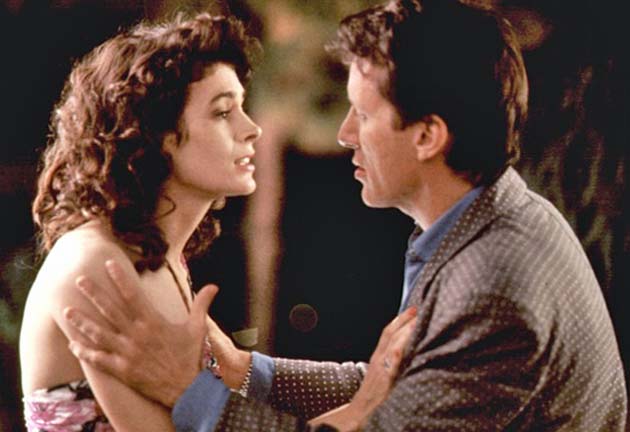 Sean Young and James Woods in ‘The Boost.’

When it comes to James Woods’ acting heyday in the ’80s and ’90s, probably better known than any of his film or television appearances is his $2 million (approx. $4 million today) lawsuit against his The Boost (1988) leading lady Sean Young, with whom he reportedly had a brief affair only to dump her and return to his fiancée. (At the time, People pegged the lawsuit at $6 million.) Both performers have denied they had a relationship.

Filed in 1989, his accusations against Young (Blade Runner, No Way Out, Wall Street, and almost Batman and Dick Tracy) led to comparisons to Adrian Lyne’s blockbuster Fatal Attraction (1987). In the Oscar-nominated thriller, a mentally unbalanced Glenn Close stalks her ex-lover, married man Michael Douglas, and tries to destroy his family life. As Douglas’ wife, Anne Archer is the embodiment of (cuckolded) all-American wifehood and motherhood.

Sean Young has denied all charges. The lawsuit was eventually settled out of court.

Note: In Harold Becker’s The Boost – a movie that would have been totally forgotten were it not for the lawsuit against Sean Young – James Woods plays hardcore cocaine addict Lenny Brown. The film’s title, in fact, refers to Lenny’s coke dependency.

‘A Room with a View’ & ‘The Color Purple: Remembrances of Things Past

Just to explain why James Woods is anti-liberal and has little patience: he has the highest IQ among celebrities - 184!
Einstein’s was 160.
Search for “James Woods” “IQ” “celebrities” and you’ll see.
He may be sick of seeing retards all around.