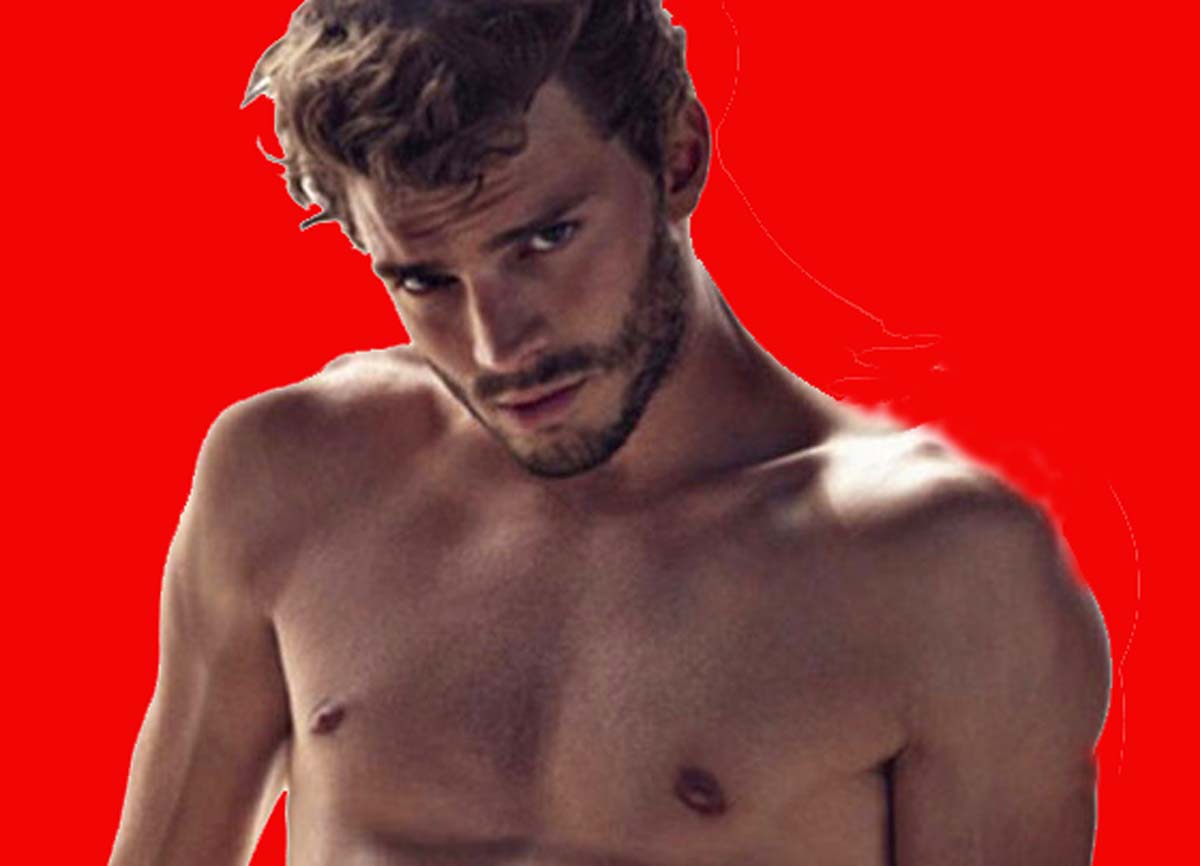 Valentine’s Day 2015 will get a lot kinkier than Valentine’s Days of years past – well … depending on your concept of “kink.” Universal Pictures has announced that the movie version of E.L. James’ Fifty Shades of Grey, likely to get either a tame (for sex) R or an even tamer PG-13 rating from the prudes at the Motion Picture Association of America, has a new release date – in 2015: Friday, Feb. 13, the day before Valentine’s Day and the start of President’s Day weekend in the United States.

To be directed by Sam Taylor-Johnson (Nowhere Boy), Fifty Shades of Grey is set to star Henry Cavill-look-alike Jamie Dornan (Flying Home) as billionaire and S&M aficionado Christian Grey and Dakota Johnson (21 Jump Street) as his ready, willing, and able sex pal. Fifty Shades of Grey had been originally scheduled to debut on August 1, 2014.

Officially, the key reason for the Fifty Shades of Grey release date postponement is not Charlie Hunnam’s abrupt departure from the project a few weeks ago (and Jamie Dornan’s subsequent casting), but that summer 2014 will be a crowded field made worse – in terms of international openings – by the World Cup in Brazil.

For the time being, August 1, 2014, belongs to Marvel’s Guardians of the Galaxy, featuring Chris Pratt, Bradley Cooper, Zoe Saldana, and Benicio del Toro. Other August 2014 releases include:

On Valentine’s Day (and President’s Day) weekend 2015, Fifty Shades of Grey could face competition from a movie adaptation of Nicholas Sparks’ The Longest Ride, which has yet to begin casting.

Tom Cruise and Jack Nicholson together again in a movie named El Presidente? Well, that’s a possibility. According to The Hollywood Reporter, Cruise has been trying to convince his A Few Good Men co-star to play the title role in the comedy (for now) to be directed Doug Liman. Without naming names, the Reporter article mentions “sources” that claim Cruise wouldn’t do the movie without Nicholson. Or so he supposedly said.

The story of a serious-minded secret service agent (Tom Cruise) assigned to protect a boozing, woman-crazy former U.S. president (Jack Nicholson), El Presidente apparently has escaped a few assassinations since casting rumors were first announced three years ago. Either that, or the president in question was shot dead and has recently been resurrected. Jay Roach (Meet the Fockers) was initially mentioned as the project’s possible director; the currently attached Doug Liman directed Tom Cruise in the sci-fi thriller Edge of Tomorrow, which is scheduled to come out in North America in June 2014.

The original El Presidente screenplay was penned by The Daily Show writer Daniel J. Goor and Jesse Armstrong (In the Loop). Paul Attanasio (Quiz Show, The Good German) has been doing rewrites.

Movies featuring fictional U.S. presidents run the gamut from the dead serious – e.g., Otto Preminger’s Advise & Consent (an ailing Franchot Tone) and John Frankenheimer’s Seven Days in May (Fredric March, about to be deposed by a right-wing military coup) – to pseudo-liberal fluff like Rob Reiner’s The American President, with Michael Douglas and Annette Bening, and Ivan Reitman’s Dave, a sort of modernized The Prisoner of Zenda starring Kevin Kline as both a dissolute U.S. president and his honorable Common Man double.

The most recent Jack Nicholson movie was How Do You Know, released in 2010. The 76-year-old, three-time Oscar winner (One Flew Over the Cuckoo’s Nest, Terms of Endearment, As Good As It Gets) is purportedly picky about any new projects. And he might as well be. Directed by James L. Brooks, and co-starring Reese Witherspoon, Owen Wilson, and Paul Rudd, How Do You Know was a mammoth box office bomb: a $120 million-budgeted comedy that grossed less than $50 million worldwide as per figures found at Boxofficemojo.com.

Though lambasted by critics, Jack Nicholson’s previous movie, the 2007 death-and-dying comedy The Bucket List, took in a respectable $175.37 million worldwide on a $45 million budget (not including marketing and distribution expenses). And before that, Nicholson was one of the stars in Martin Scorsese’s 2006 Best Picture Academy Award winner The Departed, co-starring Leonardo DiCaprio and Matt Damon.

In addition to the titles already mentioned in the paragraphs above, among Nicholson’s movies of decades past are Dennis Hopper’s Easy Rider (1969), with Hopper and Peter Fonda; Bob Rafelson’s Five Easy Pieces (1970), opposite Karen Black; Hal Ashby’s The Last Detail (1973), with Otis Young and Randy Quaid; Roman Polanski’s Chinatown (1974), with Faye Dunaway and John Huston; Warren Beatty’s Reds, co-starring Beatty and Diane Keaton; John Huston’s Prizzi’s Honor (1985), with Kathleen Turner and Anjelica Huston; and Tim Burton’s Batman (1989), starring Michael Keaton in the title role and featuring Nicholson as The Joker.

Besides his three wins, Jack Nicholson has been nominated for nine other Academy Awards. The last time, in the Best Actor category, was for Alexander Payne’s About Schmidt. 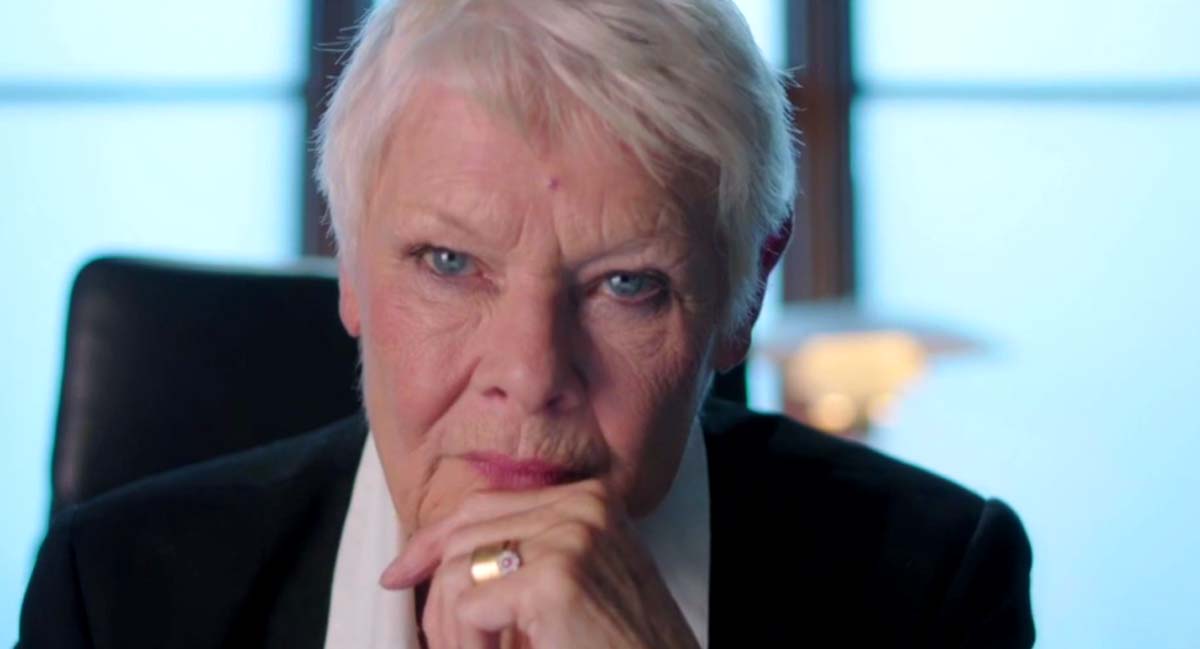 James Bond, savior of the Free World, was just recently back, fighting the forces of undemocratic darkness. No, not in a new movie featuring communists and/or terrorists, but in a Funny or Die video, with Steve Coogan as a shoot-first-ask-questions-later James Bond (Adam Sandler better watch out) and Judi Dench as Bond’s boss M. See video below:

Here’s the story: The publicity-savvy The Weinstein Company and the prudish censorship board of the Motion Picture Association of America were at it again, doing the best they can to ensure that:

Yesterday, November 13, 2013, The Weinstein Company announced that the Motion Picture Association of America had changed the rating of the upcoming TWC release Philomena, starring Judi Dench and Steve Coogan, from an R to a PG-13. (See also: “The Parents Television Council vs. ‘Bully’; “The King’s Speech and Blue Valentine censorship woes.”)

The MPAA had slapped Philomena with an R rating because of two instances of the word “fuck” being used in the Stephen Frears-directed film based on a true story about an elderly Irish woman (Judi Dench) who, with the assistance of a journalist (Steve Coogan), attempts to find her son, taken away from her decades earlier. TWC head Harvey Weinstein said in a statement:

We owe this victory to Barbara Broccoli, producer of the James Bond series, Daniel Craig, and Sam Mendes, who because of their relationship with Judi Dench, gave permission to spoof the ratings system using the M character. We know that went a long way into shedding light on the themes of the movie and the fact that the PG-13 rating was correct. We are glad the MPAA has a good sense of humor and with the cooperation of Barbara and her team, it was proven once again no one does it better than James Bond.

Philomena, which is sure to earn Judi Dench her seventh Academy Award nomination, opens in North America on November 27. The film has already earned Jeff Pope and Steve Coogan the Best Screenplay Award at the Venice Film Festival and was the runner-up for the People’s Choice Awards at the Toronto Film Festival (behind Steve McQueen’s 12 Years a Slave). A few days ago, Philomena received four nominations for the 2013 British Independent Film Awards (Best Film, Best Actress Judi Dench, Best Actor Steve Coogan, Best Screenplay).

‘Tell No One’ thriller to get Hollywood remake

Gavin O’Connor, among whose credits are Tumbleweeds, Warrior, and the upcoming Natalie Portman action drama Jane Got a Gun, “is in negotiations” to direct Universal and Warner Bros.’ thriller Tell No One, according to The Hollywood Reporter. Whether the film will be a direct remake of Guillaume Canet’s Ne le dis à personne (2006), starring François Cluzet and Marie-Josée Croze, or be based on the original source – Harlan Coben’s novel Tell No One – is unclear. Canet and Philippe Lefebvre were credited for the screenplay of the French movie.

Frequent Steven Spielberg collaborator Frank Marshall (The Color Purple, War Horse, Jurassic World) is producing the new Tell No One. Academy Award winner Chris Terrio (Argo) will be writing the adaptation. Curiously, Argo director Ben Affleck had been previously attached to this particular project as both director and star.

‘Tell No One’ plot, cast

Sharing elements in common with Alfred Hitchcock’s The 39 Steps and North by Northwest, the intriguing – but more than a little far-fetched – Tell No One follows a doctor (François Cluzet) wrongly suspected of having done away with his wife (Marie-Josée Croze).

I can’t wait to see this! I’m not too bothered if it isn’t as good as the books so long as it’s just as steamy!