Jane Powell, the youthful star of a series of lighthearted Metro-Goldwyn-Mayer color comedy-musicals of the 1940s and 1950s is Turner Classic Movies’ Star of the Month in June.

Undeniably a pleasant performer and a talented singer gifted with a fantastic voice, Powell was generally wasted as “all-American” (back in those days, white, and preferably blonde and blue- or green-eyed) “girl-next-door” (back in those days, cute, pert, sexless) in watchable but routine and proudly artificial comedy-musicals, usually produced by Universal import Joe Pasternak, whose goal in life during his MGM tenure seems to have been the creation of another Deanna Durbin. Powell, even more than fellow MGM soprano Kathryn Grayson, was to have been Pasternak’s clay model.

Therefore, it’s hardly surprising that Jane Powell found herself cast in movies that were remakes of Deanna Durbin star vehicles or as Durbin-like characters. Case in point: Nancy Goes to Rio, a remake of Durbin’s It’s a Date (1940) that has Powell and her movie mom, glamorous Ann Sothern, vying for both the same stage role and the same guy (Barry Sullivan).

If you expect anything Freudian – even a mere slip – from this MGM concoction, not only you’ll be very disappointed but you should also seek psychiatric help (no pun intended). Nancy Goes to Rio, like just about every single Jane Powell movie and just about every MGM movie released during the so-called “Golden Age,” is as criminally superficial as a movie has the right to be. 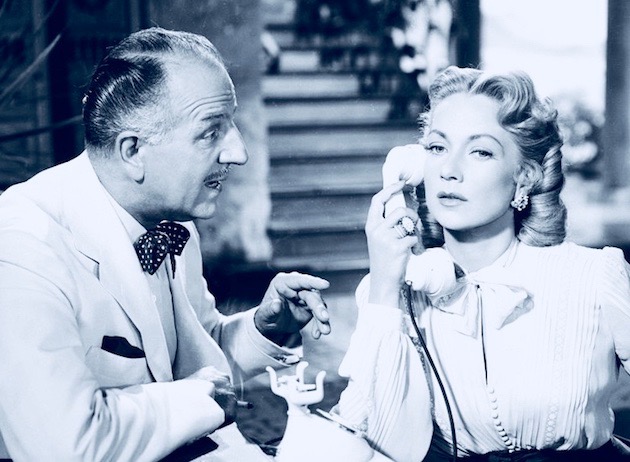 Ann Sothern in Nancy Goes to Rio with Louis Calhern. On a scale from commonplace to exceptional, this bit of fluff, like most of producer Joe Pasternak’s MGM output, lies quite a bit closer to the former. On the positive side, Ann Sothern looks fantastic in Technicolor.

Although Ann Sothern was seen in three films supervised by the more prestigious Arthur Freed – Lady Be Good, Panama Hattie, Words and Music – her talents remained mostly untapped during the heyday of the MGM musical in the late 1940s and early 1950s.

As for Jane Powell, she looks awful pretty in color, but the most memorable performance here is the one delivered by Carmen Miranda, who played the stereotypical “fiery Latin” to perfection. Only a truly brilliant actress could have succeeded in such cliched parts.

By the way, Nancy never actually goes to Rio; she and her fellow cast members spend the whole time on the MGM backlot.

Also worth noting, after leaving MGM in the mid-1950s, Jane Powell would join the cast of The Female Animal, in which she and Hollywood star-mom Hedy Lamarr also vie for the same dude, hunky movie extra George Nader.

Norman Taurog’s Rich Young and Pretty offered Powell another Durbin-like role, this time as the daughter of rich, middle-aged (she was 34), and beautiful Danielle Darrieux, in one of her few English-language film roles. The presence of this screen legend is more than enough of a recommendation for people to check out this bit of fluff.

Royal Wedding is one of Stanley Donen’s most unimaginative musicals, but its highlight, Fred Astaire’s Dancing on the Ceiling number, remains as impressive in the early 21st century as it was back in the mid-20th century. Jane Powell was a last-minute replacement for Judy Garland, at the time going through some heavy-duty emotional issues.

Much more enjoyable is Roy Rowland’s Two Weeks with Love, quite possibly Jane Powell’s second-best movie, after Seven Brides for Seven Brothers. In this period family comedy-musical – it’s truly about a a family – Powell is in top form and so are veterans Louis Calhern (Best Actor Oscar nominee that same year for The Magnificent Yankee) and Ann Harding (Best Actress nominee for Holiday, during the period 1930–1931). As there’s no Carmen Miranda around, the scene-stealer here is Debbie Reynolds, singing with Carleton Carpenter the 1914 ditty “Aba Daba Honeymoon.”

Lastly, Small Town Girl was a box office flop that is no better no worse than any other Jane Powell movie – except for the aforementioned Two Weeks with Love and Seven Brides for Seven Brothers (i.e., it’s worse than these two).

As so often happened in her movies, Ann Miller, playing a Broadway star, is the film’s highlight. Also, look for veteran Fay Wray (The Most Dangerous Game, King Kong) as Powell’s Small Town Mom.

Despite sharing the same title, this is not a direct remake of the 1936 Janet Gaynor-Robert Taylor star vehicle Small Town Girl, based on a novel by Ben Ames Williams.

This Jane Powell article is being revised/expanded. Please check back later.

Fredric March Movies: A Star Is Born + Alexander the Great