Actors Jang Dong-gun and Kate Bosworth attended a junket panel for The Warrior’s Way on Nov. 18 at the Landmark Theatre in Los Angeles.

Written and directed by Sngmoo Lee, The Warrior’s Way tells the story of a warrior-assassin hiding in a small town in the American Badlands after turning down an assignment.

The Warrior’s Way opens in the United States on Dec. 3.

Update: The Warrior’s Way turned out to be a major critical and commercial flop. 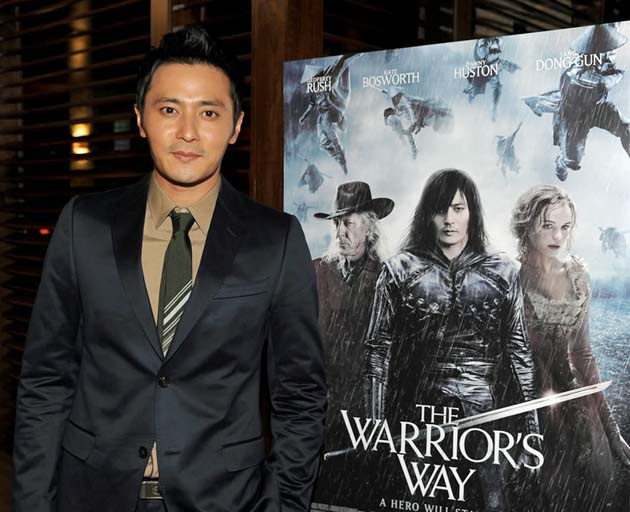 Jang Dong-gun has been featured in a dozen movies, mostly in his native South Korea. Titles include Kwak Kyung-Taek’s Typhoon (2005), with Lee Jung-jae and Lee Mi-yeon; Chen Kaige’s The Promise (2005), with Hiroyuki Sanada and Cecilia Cheung; and Jang Jin’s Good Morning President (2009), with Lee Soon-jae.

Beginning with Robert Redford’s The Horse Whisperer (1998), since the late 1990s Kate Bosworth has been seen in about 15 features. These include Kevin Spacey’s Beyond the Sea (2004), with Spacey as singer/actor Bobby Darin and Bosworth as actress Sandra Dee; Bryan Singer’s Superman Returns (2006), with Brandon Routh as Clark Kent/Superman, Bosworth as Lois Lane, and Kevin Spacey as Lex Luthor; and Robert Luketic’s sleeper box office hit 21 (2008), with Jim Sturgess and, once again, Kevin Spacey.

Adrien Brody as Wladyslaw Szpilman in Roman Polanski’s The Pianist

The Pianist Victim-Hero Accused of Gestapo Ties in New Book

The story of Polish-Jewish musician Wladyslaw Szpilman, who survived World War II against all odds, Roman Polanski’s The Pianist (2002) was sold as a motion picture about the “triumph of the human spirit.”

For those who believe that human survival instinct is somehow “spiritual” – I’m assuming most people do; I’m not one of them – The Pianist rehabilitated Polanski at least in terms of his filmmaking abilities, following a string of generally dismissed efforts such as Pirates, Bitter Moon, and The Ninth Gate.

Eventually, The Pianist went on to receive three Academy Awards: Best Director, Best Actor for Adrien Brody for his highly Americanized portrayal of the Polish Szpilman, and for Ronald Harwood’s adaptation of Szpilman’s book of memoirs.

Now comes Polish journalist Agata Tuszynska, who claims in a biography of the late cabaret singer Wiera Gran that her subject accused Szpilman of having collaborated with the Gestapo to keep himself alive during the Nazi occupation of Poland. Hardly the kind of “spiritual” survival instinct people want to hear about.

Curiously, Szpilman had previously accused Gran of being herself a Nazi collaborator. According to Eric Westerwelt’s NPR report, Gran spent the rest of her life trying to clear her name.

Szpilman’s descendants, for their part, assert the accusation found in Tuszynska’s book is completely false. His son, Andrzej, has vowed to take legal action to try to stop the publication of the Gran biography.

This isn’t the first time that a Nazi era hero made famous at the movies gets his name besmirched. Following the success of Schindler’s List, Oskar Schindler’s widow claimed that the former Nazi spy-turned-Jewish savior was a “pitiful” figure who really couldn’t have cared less whether or not he could’ve done more for those in his charge.

The Academy of Motion Picture Arts and Sciences haven’t officially released their longlist of Best Documentary Feature contenders for the 2011 Oscars, but the 15-film list has already been circulating online thanks to a leak (see “update” below) somewhere inside the Academy. (Deadline was the first site to publish the list; others have followed suit since.) [Update: The Academy says the announcement was released at 12:17 p.m. and that no outlet was given priority. Deadline’s current post date says “12:21 p.m.” We at Alt Film Guide received the announcement via e-mail at 12:59 p.m.]

Most documentaries that pundits expected would get a nomination have been included in the longlist, e.g., Davis Guggenheim’s Waiting for ‘Superman’, about the sad state of the American education system; Alex Gibney’s Client 9: The Rise and Fall of Eliot Spitzer, a look at the political machinations behind the rise and fall of New York governor Eliot Spitzer; Amir Bar-Lev’s The Tillman Story, about the U.S. military’s shameless deception following the death of football-player-turned-soldier Pat Tillman; and Charles Ferguson’s Inside Job, the pathetic tale of the 2008 global economic crisis. Yet, several well-received docs have been left out.

Most notable among the missing is Werner Herzog’s Cave of Forgotten Dreams – is it not getting a 2010 release? [Update: The Academy says Herzog’s film was both submitted and eligible.]

The 2011 Academy Awards ceremony will take place on Sunday, Feb. 27, at the Kodak Theatre at Hollywood & Highland Center. In the US, it’ll be broadcast live on ABC.

Directed by Landis, the 14-minute Thriller (1983) mixed hip dancing and visual effects – Michael Jackson metamorphosing into a werewolf and a zombie – to bring the music video a horror-movie feel. Thriller remains in all likelihood Paynter’s best-known and most widely seen effort.

Paynter’s first feature-film work was on Winner’s Hannibal Brooks (1969), in which a British POW and Lucy the elephant escape across the Alps into Switzerland. Oliver Reed played the latter-day Hannibal.

In order to dramatize the struggles of people suffering from obsessive compulsive disorder, actress-filmmaker Kellie Madison is working on a narrative feature titled Machine Man.

According to a press release about this project-in-the-works, Machine Man chronicles “the spirited tale of an average man, who struggles with an extraordinary problem, facing his most debilitating fear in order to save the woman he loves.”

The release adds that Madison “is using her passion for the project to attempt a filming feat no Producer has yet to achieve: raising the entire $2,000,000 budget of the film through philanthropic support from the local community. We need YOUR help in spreading the word.  This grassroots campaign is a unique, ambitious and worthwhile endeavor.  Depending on the level of support, all participants will be rewarded, including the opportunity for a role in the film.  Additionally, partial proceeds will go to the International OCD Foundation.”

For more information about Machine Man, visit www.machinemanthemovie.com and check out a four-minute video introduction about the project here.

I was fascinated that robert paynter,on visiting michael jackson home,for the first time,robert wrote an 8 page notes,about michael,the very first time,that he wrote any notes about anyone.