Javier Bardem was the year’s Best Supporting Actor Academy Award winner for his performance as a merciless hired killer in Joel and Ethan Coen’s thriller No Country for Old Men. The 2008 Oscar ceremony took place on Feb. 24 at the Kodak Theatre in Hollywood.

Bardem had been previously been nominated in the Best Actor category for Julian Schnabel’s Before Night Falls (2000), in which he plays Cuban poet Reinaldo Arenas. He lost to Russell Crowe in Ridley Scott’s Gladiator.

Javier Bardem began his film career in Spain in the early 1990s. His movie credits include:

Besides No Country for Old Men, Javier Bardem’s Hollywood and international movies include:

Below are Oscar 2008 pictures of composer Dario Marianelli, screenwriter Diablo Cody, and others. 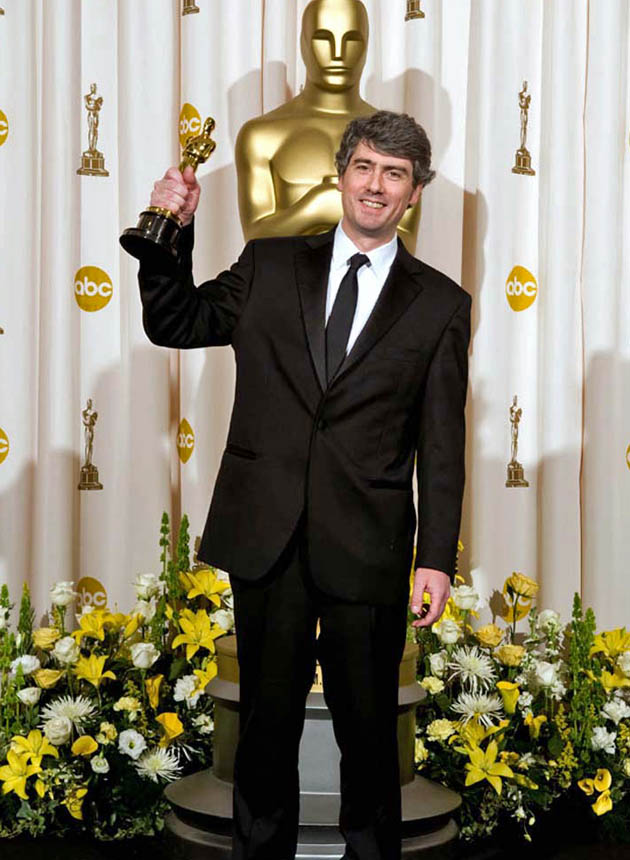 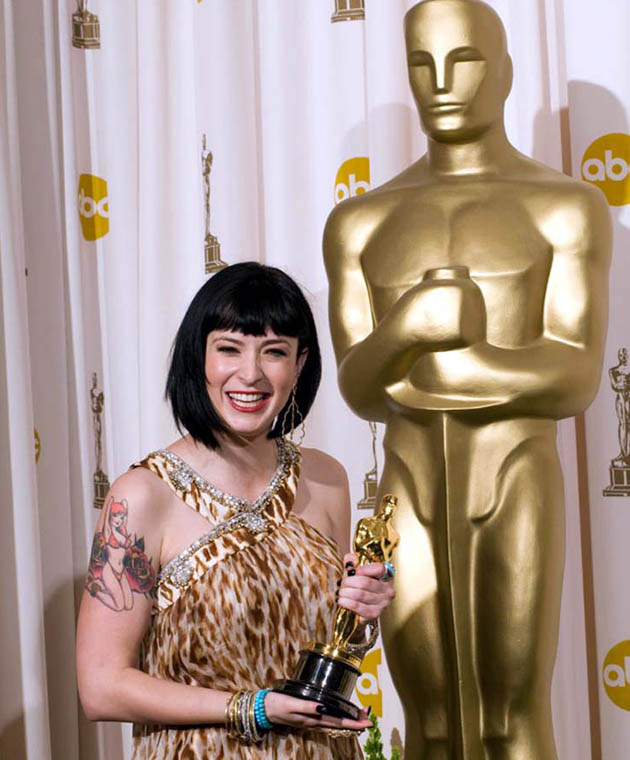 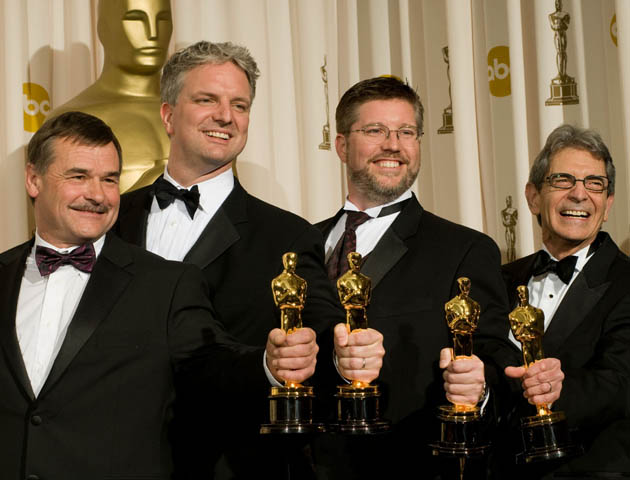 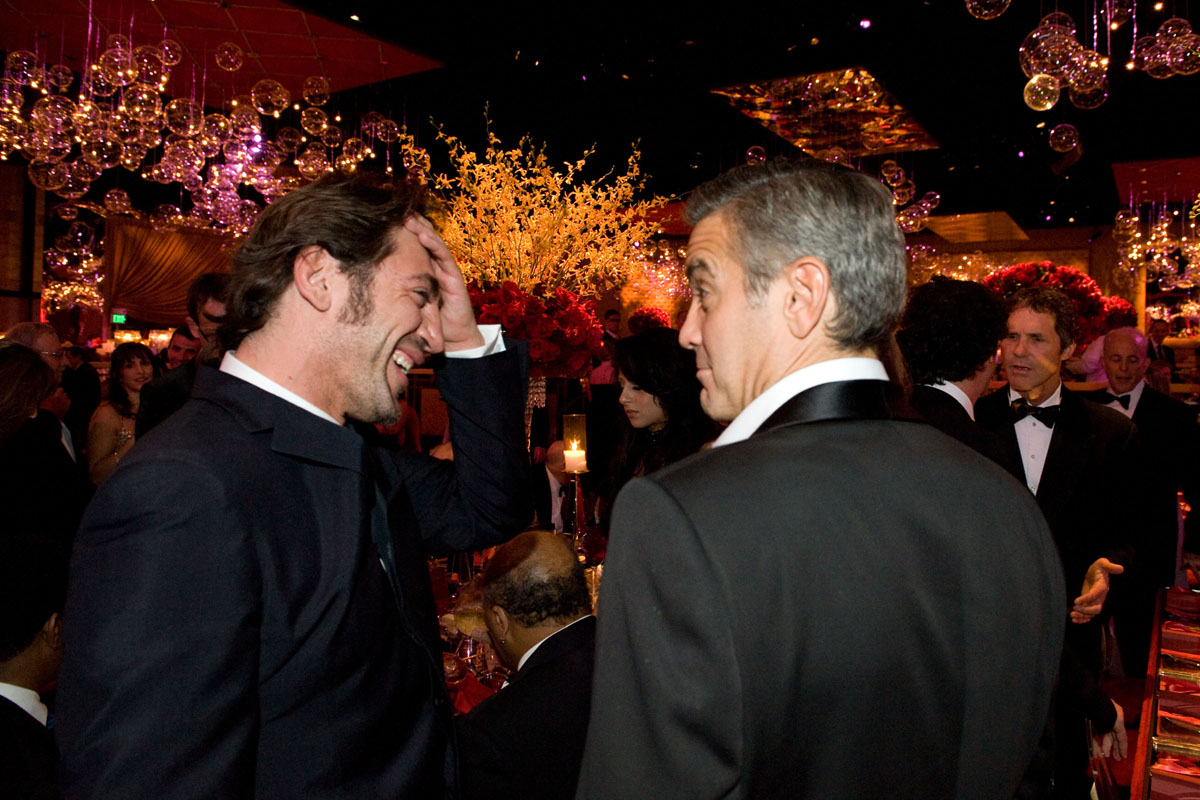 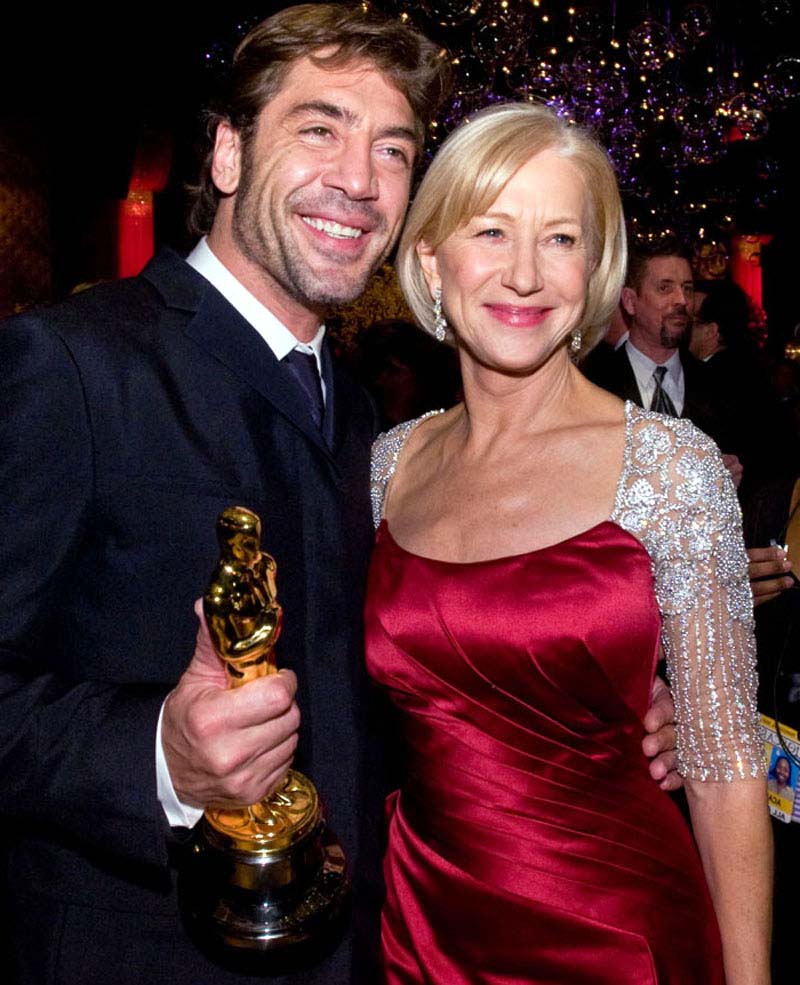 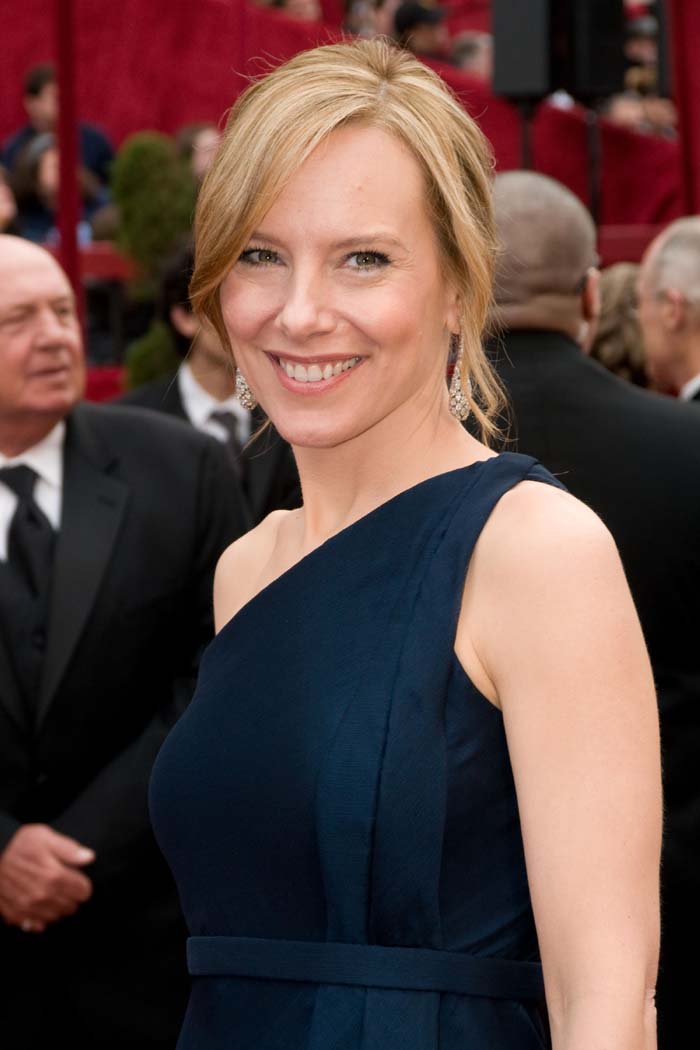 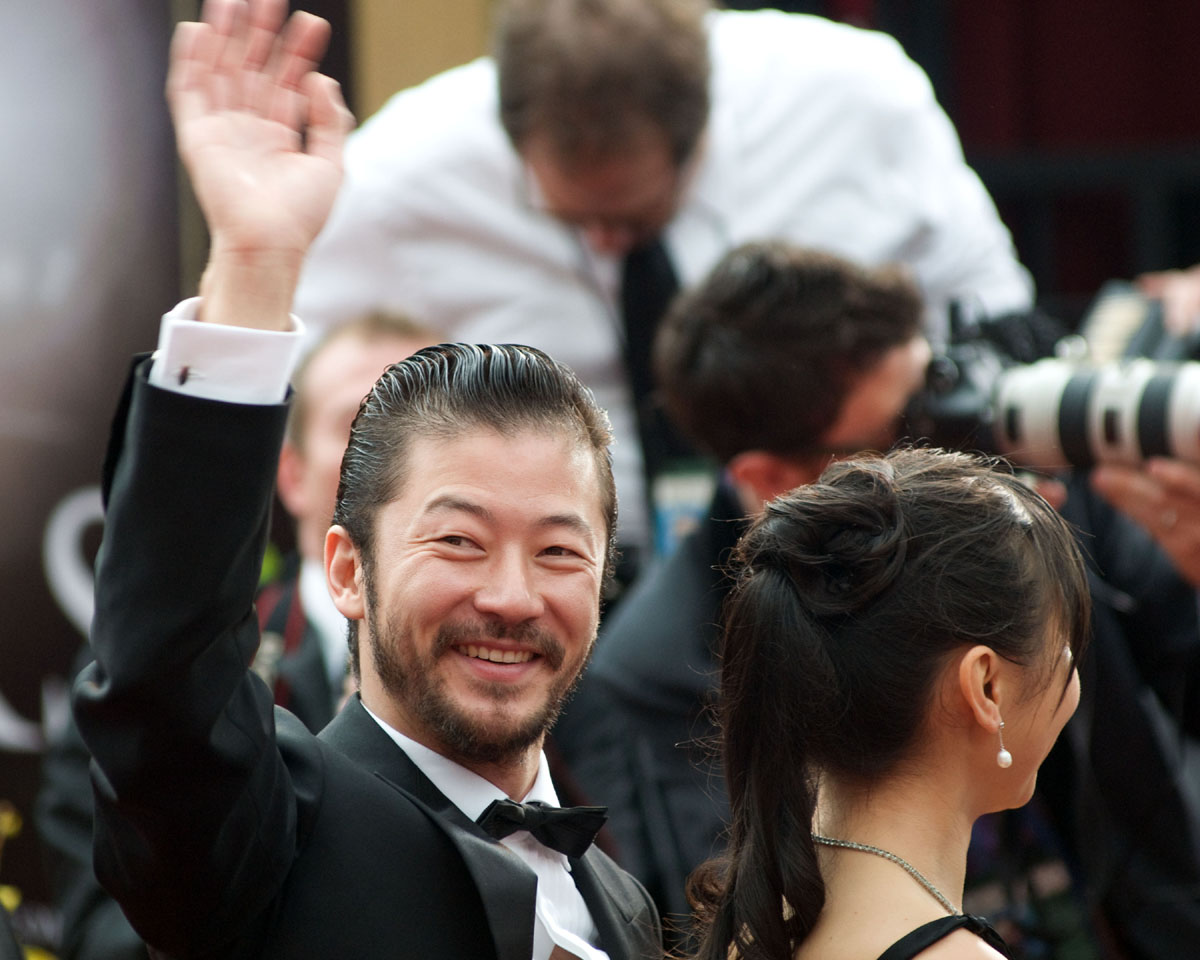 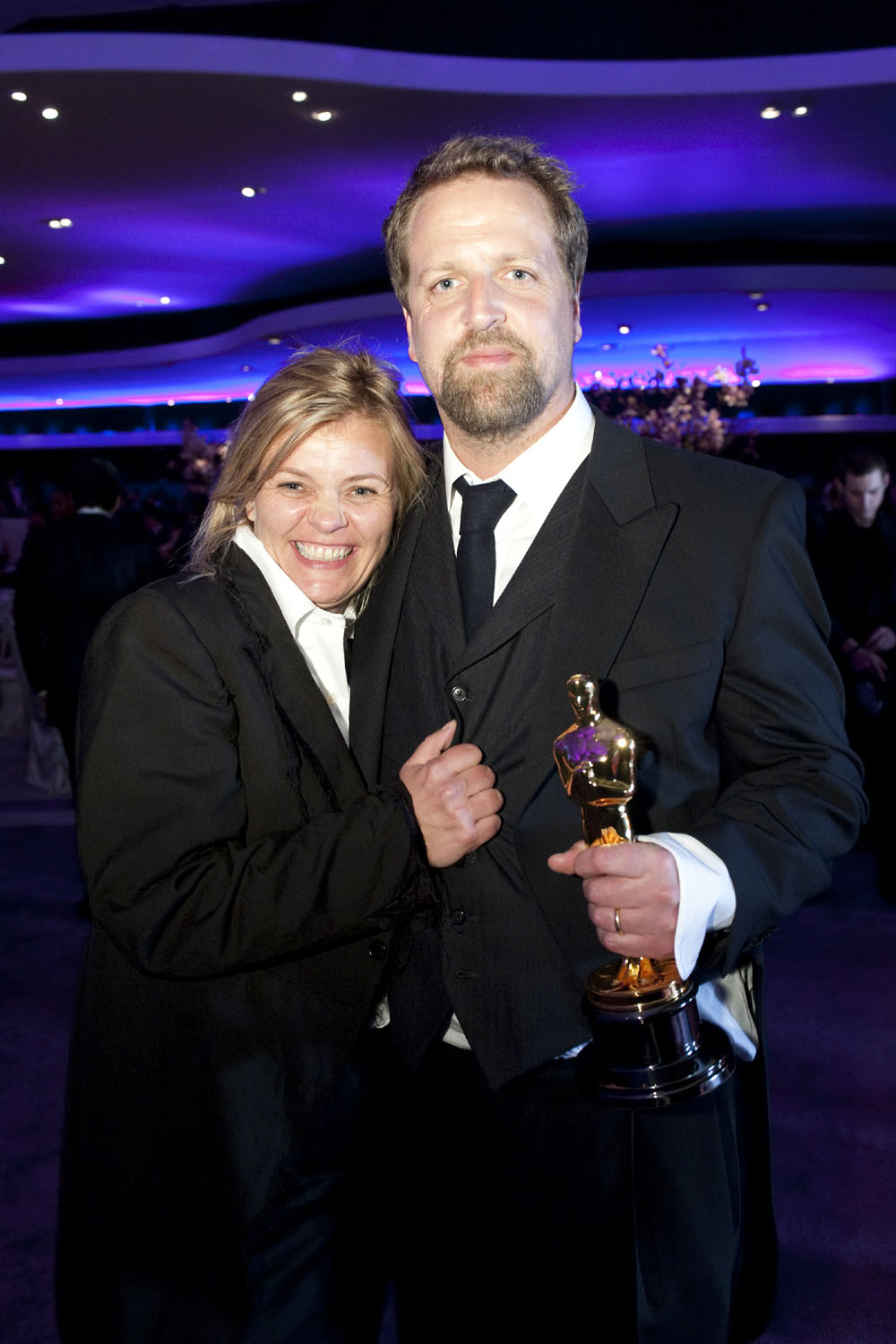 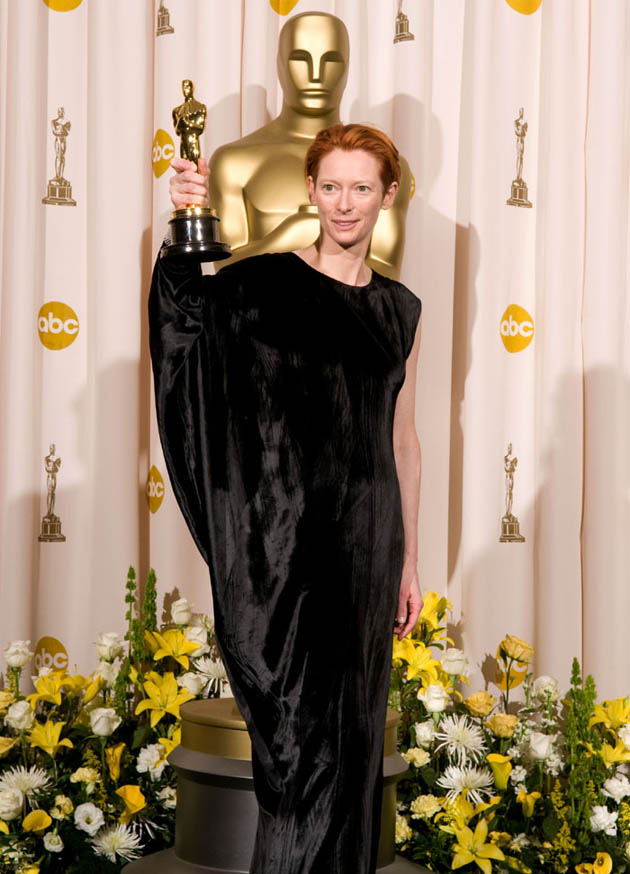 Tilda Swinton, whose unusual film career dates back to the mid-1980s, was the Best Supporting Actress Academy Award winner at the 2008 Oscar ceremony held on Feb. 24 at the Kodak Theatre in the Los Angeles district of Hollywood.

Tilda Swinton film credits range from the subversive to the mundane, from the outlandishly independent to the mind-numbingly commercial. But in all fairness, Swinton’s movie career has been (much) more daring than most. Below are a few samples. 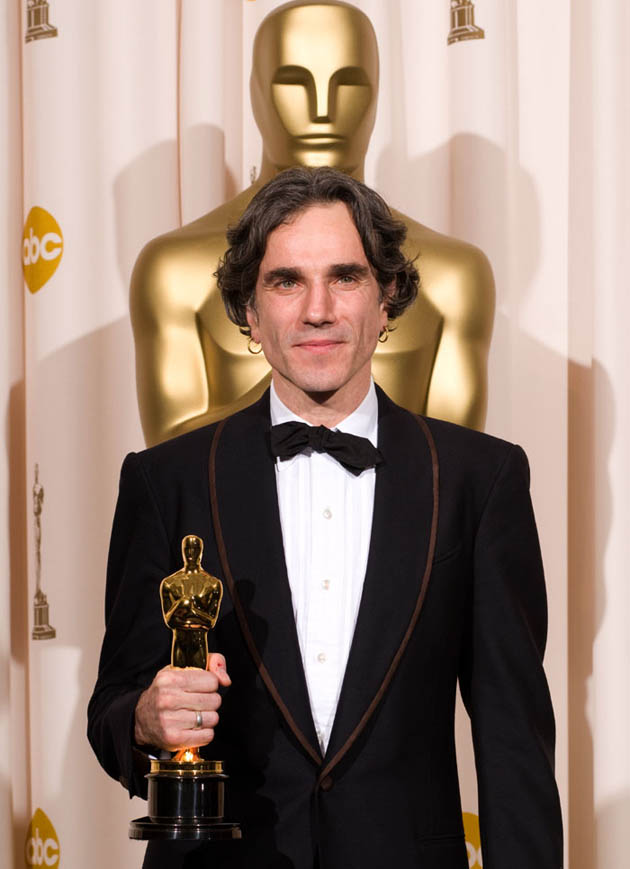 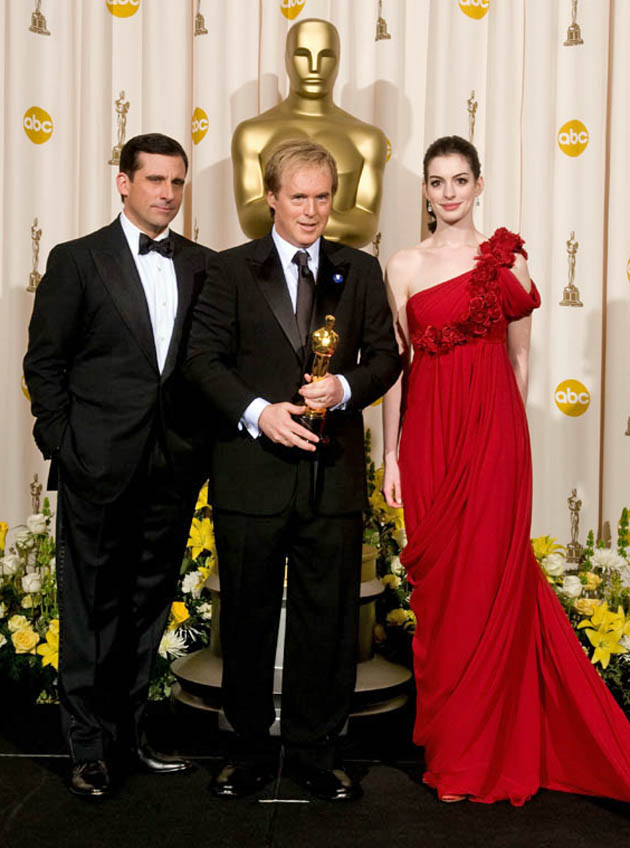 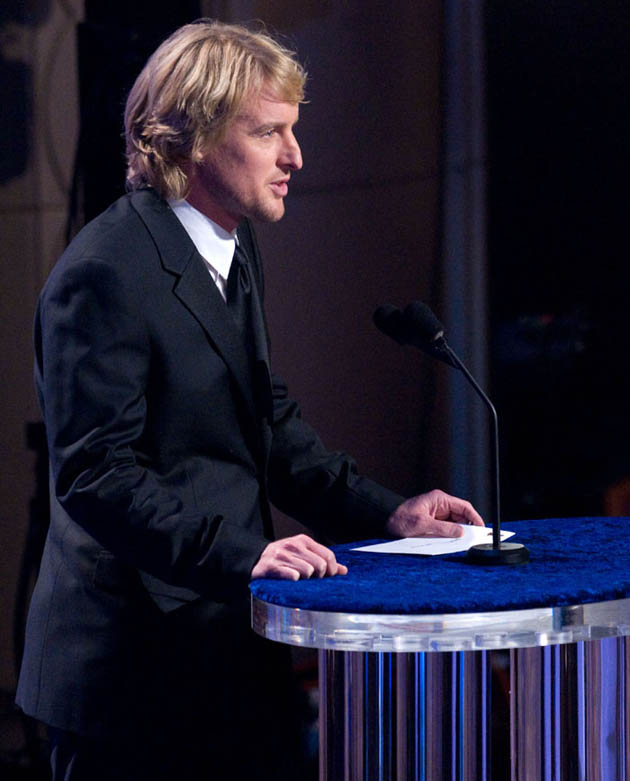 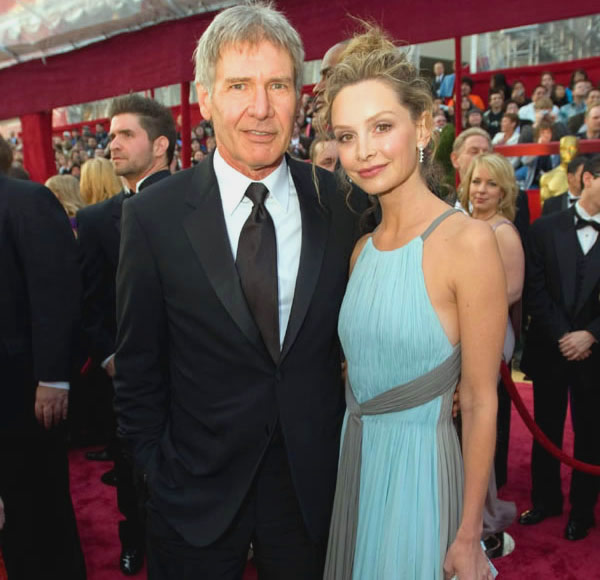 Harrison Ford and Calista Flockhart arrive at the 2008 Academy Awards ceremony. Born in Chicago in July 1942, Ford has been nominated for only one Best Actor Academy Award: Peter Weir’s crime drama Witness (1985).

Harrison Ford and Calista Flockhart have been together for a few years. Flockhart is best known for the television series Ally McBeal. She also made headlines a couple of years ago after saying she had suffered from a type of eating disorder while working on Ally McBeal. Rumors abounded at the time that Flockhart was suffering from anorexia.

Flockhart has appeared in only a handful of movies, among them The Birdcage, Telling Lies in America, A Midsummer Night’s Dream, and The Last Shot. 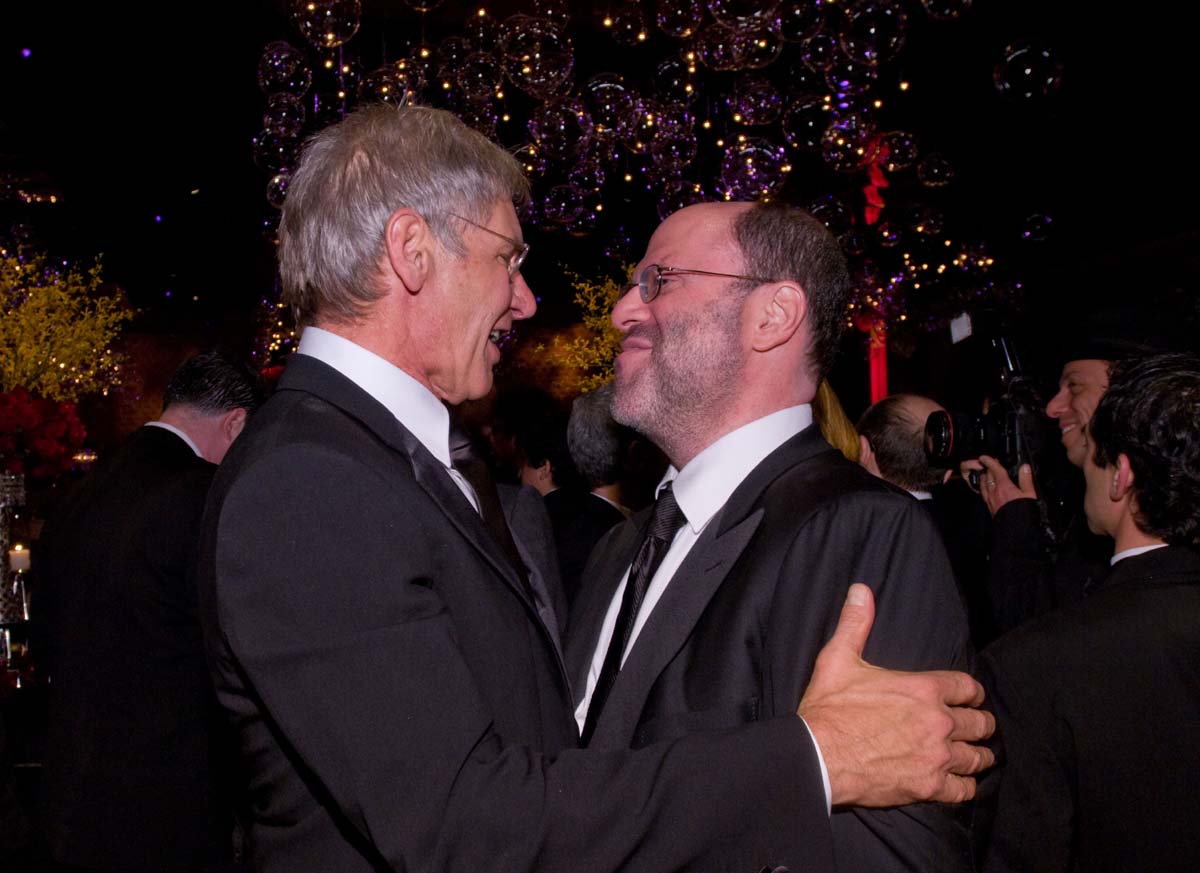 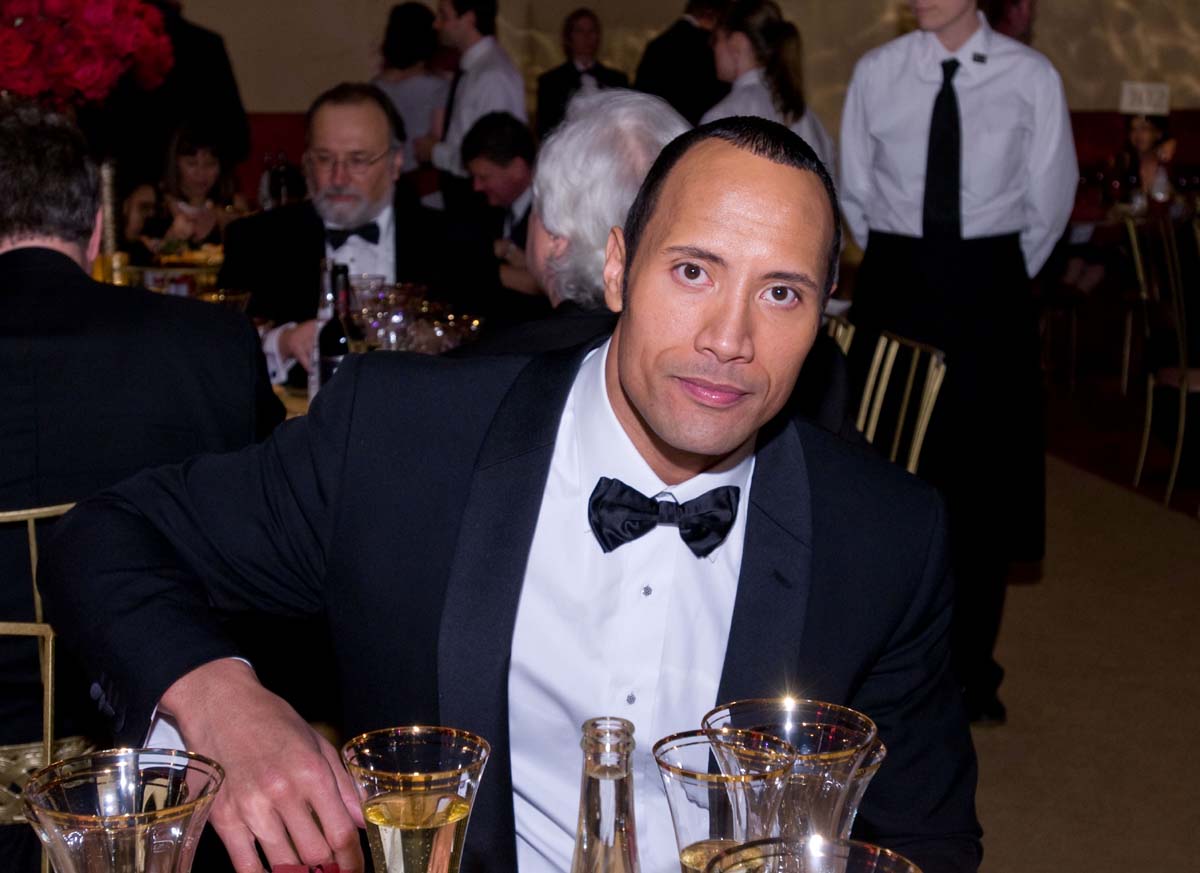 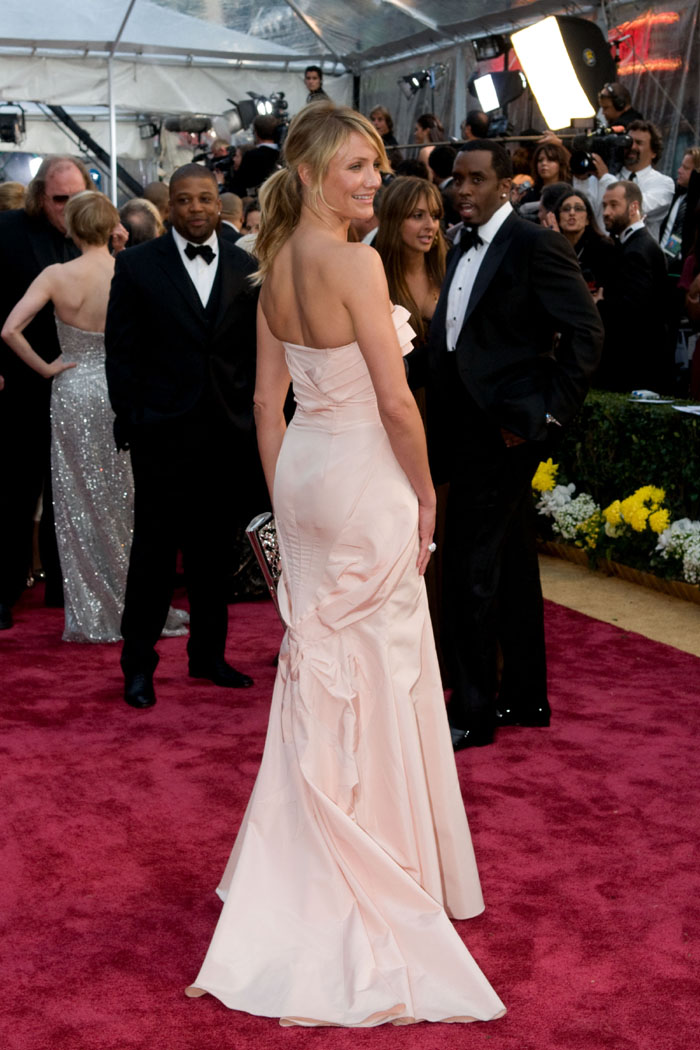 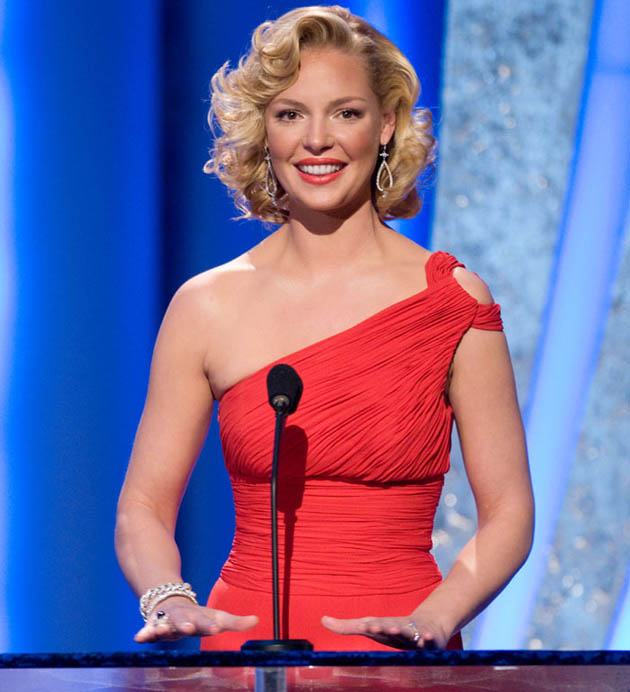 Katherine Heigl was a presenter at the 2008 Academy Awards.

In movie since 1992 (a small role in Craig Bolotin’s That Night), 2008 Oscar presenter Katherine Heigl has never been nominated for an Academy Award. However, she has become a movie and television star following a lead role in Knocked Up and a recurring one in the TV hit Grey’s Anatomy. 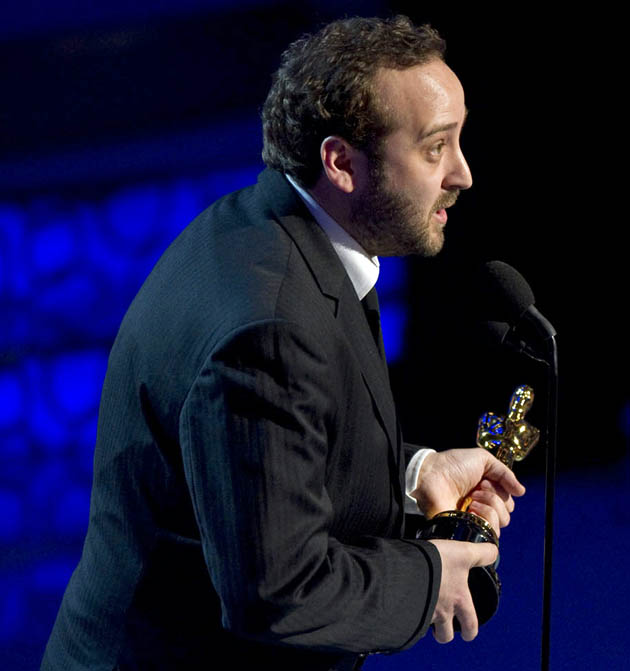 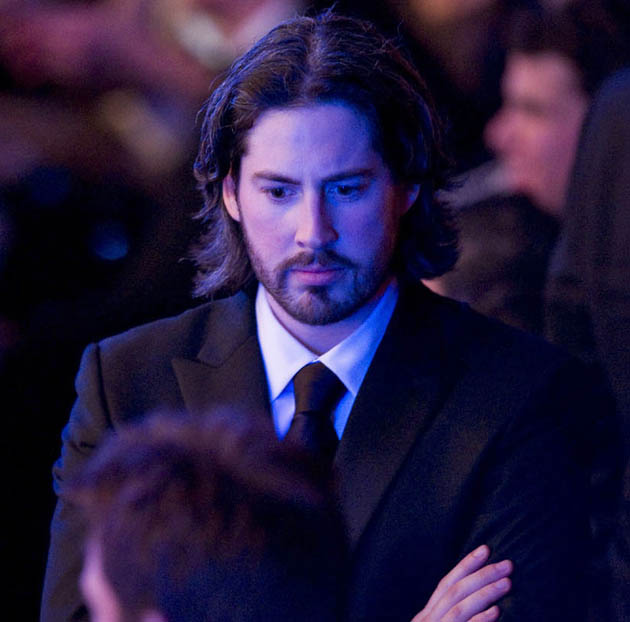 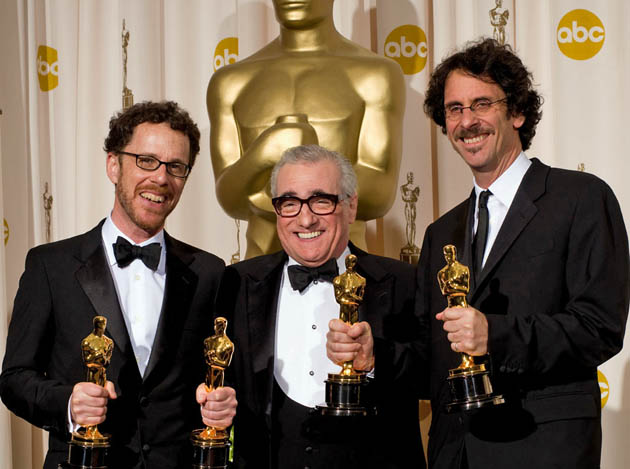 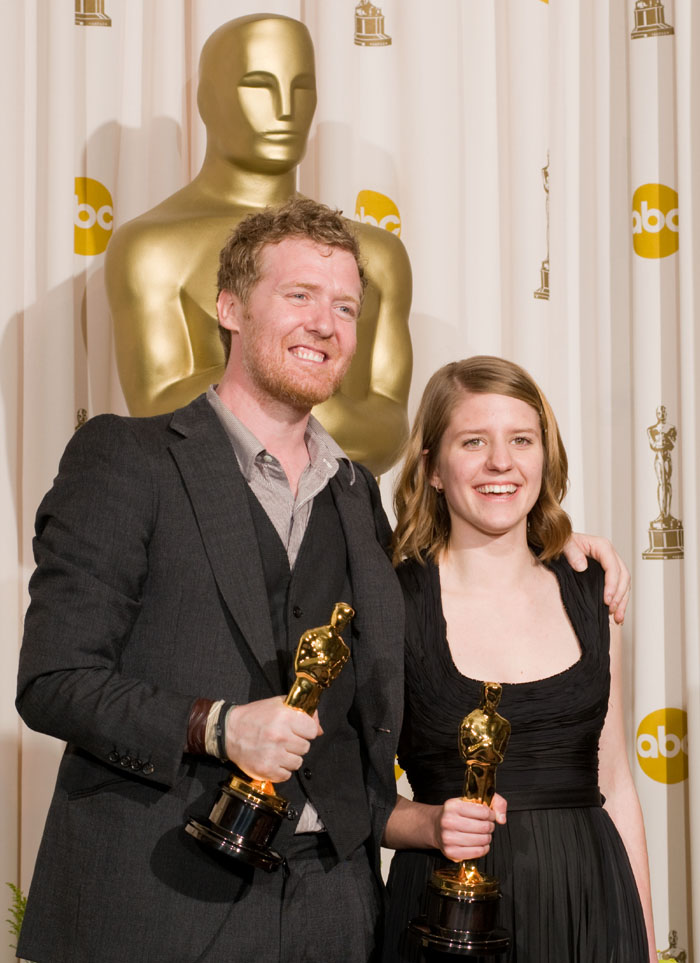 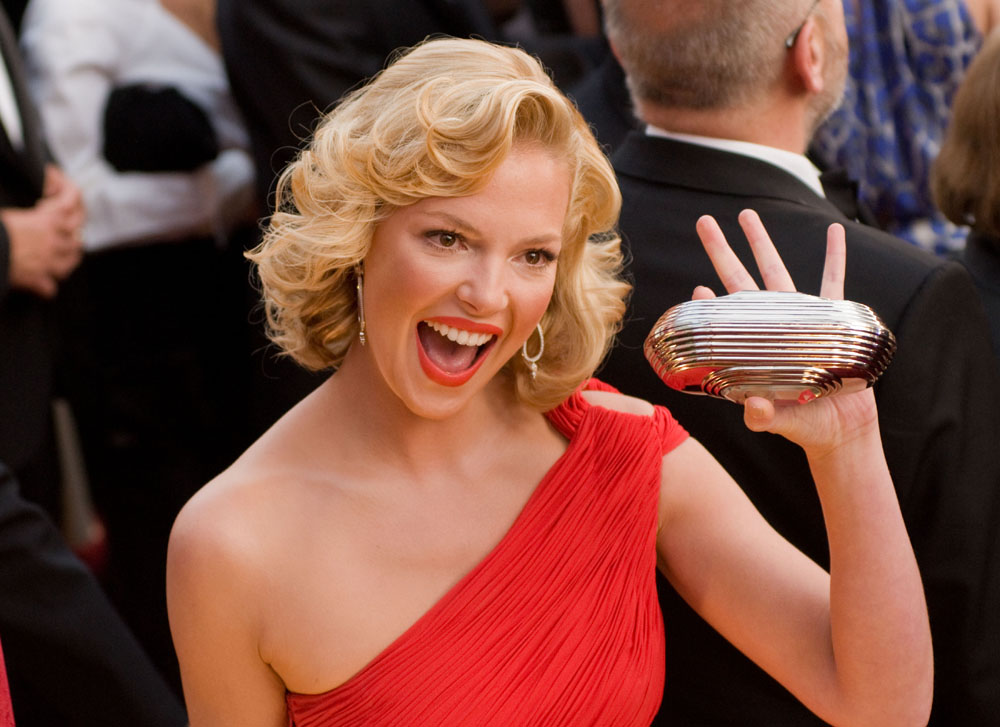 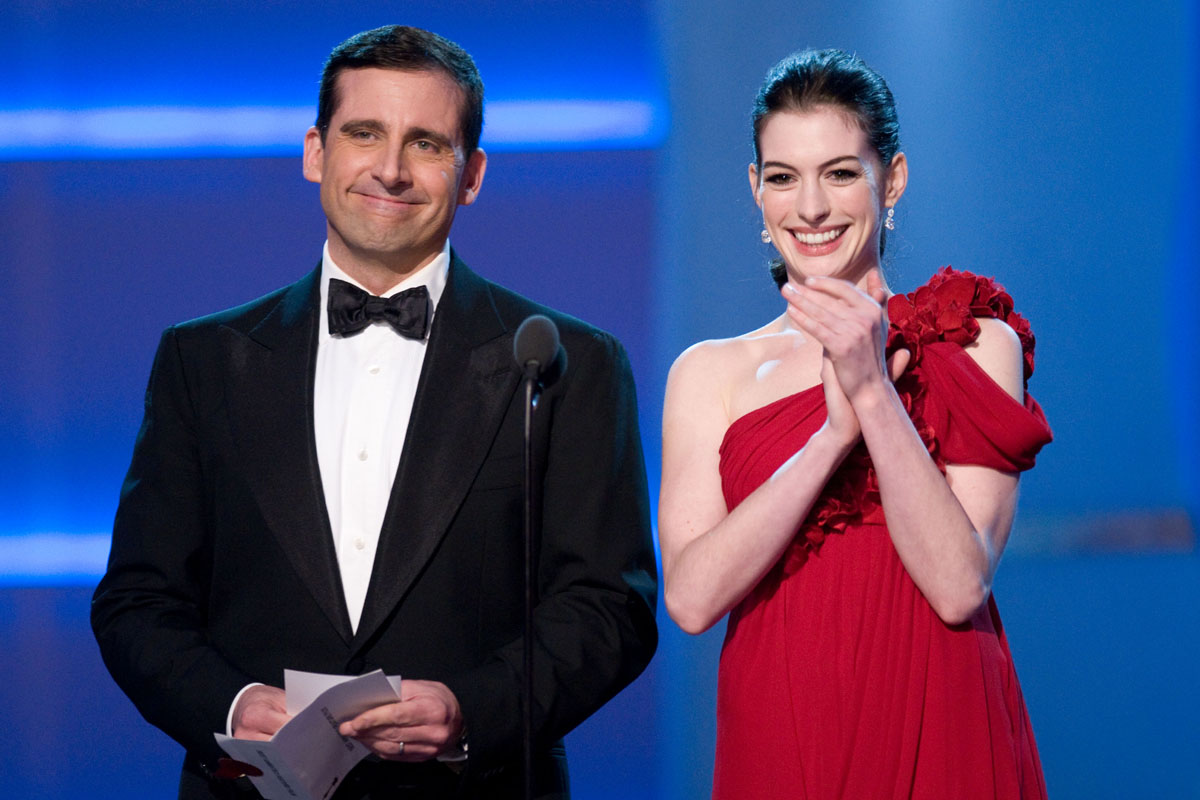 According to Oscar savants, experts, and know-it-alls everywhere, one TV-ratings point was lost per unfunny repartee at the 2008 Oscarcast. If so, the one between Steve Carell and Anne Hathaway was both long and unfunny enough to lose the show about 2 million viewers. 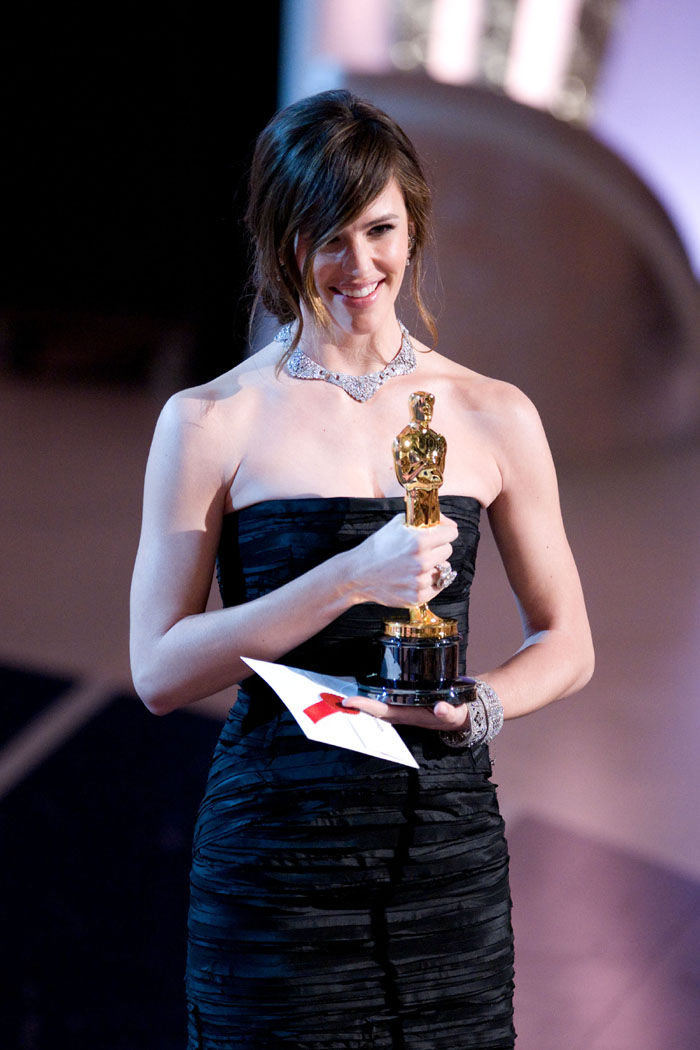 Blame it on the dark-themed films, the (relatively speaking) little-known nominees (in the US), the – until just a week ago – threat that the show wouldn’t go on because of the Writers Guild strike, network TV’s recent strike-related viewership slump, the proliferation of film-award TV shows, the bad weather in Los Angeles, the Danish Film Critics’ Bodil Awards held on the same day, the evening’s fashion (Jennifer Garner, right), the iPhone, or the Oscarcast’s reputation for being both long and ennui-inducing.

Or blame it on the ignorant masses whose idea of quality filmmaking is Meet the Spartans.

As per Nielsen Media Research, the 2008 Oscarcast hosted by Jon Stewart earned the lowest national household ratings ever (since 1953, when the show was first televised): 18.7.

With 32 million viewers in the US, it was also the least watched show since this sort of tallying began in 1974. The previous Oscar viewership nadir, the 2003 ceremony (which began right after the US-led invasion of Iraq), had 33 million viewers.

Now, considering that so many non-US personalities were nominated this year – all four acting winners were European – here’s wondering if the Oscars, much like a number of Hollywood movies of late, fared better with TV audiences elsewhere.

The most watched Oscar broadcast was in 1998, when the blockbuster Titanic won a record-tying 11 awards, including the best picture statuette. Approximately 55 million US viewers tuned in that year.

This year, only one movie among the five best picture nominees, Jason Reitman’s Juno, starring Ellen Page as a pregnant 15-year-old, has thus far crossed the US$100 million box office mark in the U.S. and Canada market.

Still, those 32 million viewers are nothing to be sniffed at. As per a Reuters report, “the Academy Awards show ranks as the year’s highest-rated entertainment special and a cash cow for Walt Disney Co.’s ABC, which raked in an average of $1.8 million for each 30-second spot, up 7 percent from a year ago.”

(As per ABC, the show had “a cumulative ‘reach’ of 64.1 million viewers, referring to the aggregate number of viewers who tuned in for at least six minutes.” Source: The New York Times.)

Martin Scorsese presented the Best Director Oscar to Joel and Ethan Coen. Other winners this year include Best Actress Marion Cotillard for La Vie en Rose and Best Actor Daniel Day-Lewis for There Will Be Blood.

X-Men: Days of Future Past: Surefire Hit Has What Other Superhero Movies Lack