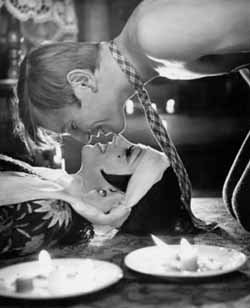 Screenwriter and playwright Jay Presson Allen died of a stroke yesterday morning at her home in Manhattan. She was 84. The Ft. Worth native (born on March 3, 1922) wrote several plays and films, usually adaptations from novels with strong and offbeat female characters.

Billed as Jay Presson, she started out as an actress but shortly thereafter turned to writing. Her first novel, Spring Riot, was published in 1948; she spent much of the following decade writing for television.

Allen’s first feature screenplay was for Alfred Hitchcock’s 1964 psychological thriller Marnie. Based on a novel by Winston Graham, the film – one of Hitchcock’s weakest and most simplistic – stars Tippi Hedren as a kleptomaniac.

Allen had better luck with her second screenplay, an adaptation of the stage success The Prime of Miss Jean Brodie. Based on Muriel Spark’s highly respected novel – which Allen herself had adapted for the stage, reportedly at the urging of Lillian Hellman – The Prime of Miss Jean Brodie is a character study of an eccentric Edinburgh teacher fascinated with Benito Mussolini.

Directed by Ronald Neame, the classy 1969 film version brought a best actress Academy Award to Maggie Smith (in a role originated by Vanessa Redgrave on the London stage; Zoe Caldwell, who played the part on Broadway in 1968, won a Tony for her performance).

Following a three-year hiatus, Allen returned to screenwriting with two 1972 successes: Travels with My Aunt and Cabaret.

Travels with My Aunt was an adaptation – co-written by Hugh Wheeler and directed by George Cukor – of a Graham Greene novel about an eccentric middle-aged woman who gets acquainted with her stiff nephew. Dismissed by some critics as a diluted version of Greene’s novel, Travels with My Aunt is nevertheless a thoroughly enjoyable romp. Maggie Smith (in a role originally intended for Katharine Hepburn) plays the traveling aunt of the title, and for her efforts she received an Academy Award nomination for best actress.

Cabaret turned out to be Allen’s crowning cinematic achievement. Adapted from Joe Masteroff’s musical – itself taken from John Van Druten’s play I Am a Camera, which in turn was based on Christopher Isherwood’s semi-autobiographical book – Allen’s insightful screenplay tells the story of a Berlin cabaret singer (Liza Minnelli) who gets involved with a shy British writer (Michael York, standing in for Isherwood) as the Nazis rise to power.

In 1973, Allen once again adapted (with Leonard Gershe) for the screen a play she had earlier adapted for the (English-language) stage, Pierre Barillet and Jean-Pierre Grédy’s French-language romantic comedy-drama Forty Carats.

The story of a 40-year-old divorcée who begins a relationship with a 22-year-old man, Allen’s 1968 stage adaptation had won Julie Harris a Tony Award. The film version, however, directed by Milton Katselas and starring a much too young Liv Ullmann and Edward Albert Jr., was a critical and commercial disappointment.

Two years later, Allen co-wrote with Arnold Schulman Funny Lady (above), Barbra Streisand’s follow-up to Funny Girl. Directed by Herbert Ross, the musical was a solid box office hit on the strength of Streisand’s name – though hardly on the same scale as the original. Critics were mostly unimpressed with the sequel.

Following a five-year hiatus, Allen returned to screenwriting with three commercial misfires directed by veteran Sidney Lumet. The first one was the 1980 romantic comedy Just Tell Me What You Want, which was based on her own novel. Ali MacGraw and Alan King starred, and the film fizzled quite rapidly.

The brooding 1981 cop drama Prince of the City, co-written by Lumet and starring Treat Williams, was a dismal failure at the box office though it did manage a few good reviews and an Academy Award nomination for Best Adapted Screenplay (from Robert Daley’s novel).

The following year, Deathtrap failed both to find an audience and to impress many reviewers. Adapted from Ira Levin’s stage play, and starring Christopher Reeve and Michael Caine (above) as lovers-murderers, the crime comedy-drama caused a minor sensation at the time because Superman got to kiss Alfie in the mouth. (Other Allen screenplays that somehow or other dealt with homosexuality include The Prime of Miss Jean Brodie, Cabaret, and Funny Lady.)

That was the last time Jay Presson Allen got credited for a screenplay, though in the following years she helped to clean up several film scripts. (In 1990, she used the pseudonym “Sara Schiff” for the poorly received remake of Lord of the Flies.)

Allen also co-produced (with Lumet) Just Tell Me What You Want, and was credited as executive producer in a handful of other films, including Prince of the City and the feminist 1980 Jill Clayburgh vehicle It’s My Turn.

Jay Presson Allen got her last name from her producer husband, Lewis M. Allen – responsible for the 1963 and 1990 versions of Lord of the Flies and Fahrenheit 451 – whom she married in 1955. Lewis Allen also produced two of his wife’s plays: Tru, a one-man show that won Robert Morse (as Truman Capote) a Tony, and The Big Love, a one-woman show (which Jay Presson co-wrote with her daughter, Brooke Allen) starring Tracey Ullman.

For television, Jay Presson Allen created the adult drama series Family, which ran for four seasons in the late 1970s. In 1973, she wrote the TV movie The Borrowers, starring Eddie Albert. (“I hate it,” Allen would remark about television. “I hate it because the buck doesn’t stop anywhere.”)

According to the New York Times obit, during her later years Allen spent time “observing particularly salacious crime trials from the benches in Manhattan Criminal Court.”