Jean Arthur is one of my all-time favorite performers. So, it’s great to see her listed as one of Turner Classic Movies’ “Summer Under the Stars” stars. Jean Arthur Day will take place on Sunday, Aug. 30.

Jean Arthur was Columbia’s top star from the mid-1930s to the mid-1940s, when Rita Hayworth became the studio’s reigning queen and Arthur semi-retired from films. Her characters were cynical but idealistic, strong but vulnerable, independent-minded but deeply devoted to whoever her leading man might be. In other words, Jean Arthur was the Ideal Woman: complex, passionate, warm – and she had sparkling eyes only matched by her equally sparkling smile. (And there was that voice. It should have been trademarked.)

Of course, since it’s all about Jean Arthur, I’d recommend every single one of the TCM presentations, even The Silver Horde (1930), in which Arthur has a supporting role and neither looks nor sounds at all like the actress she would become a mere four years later. 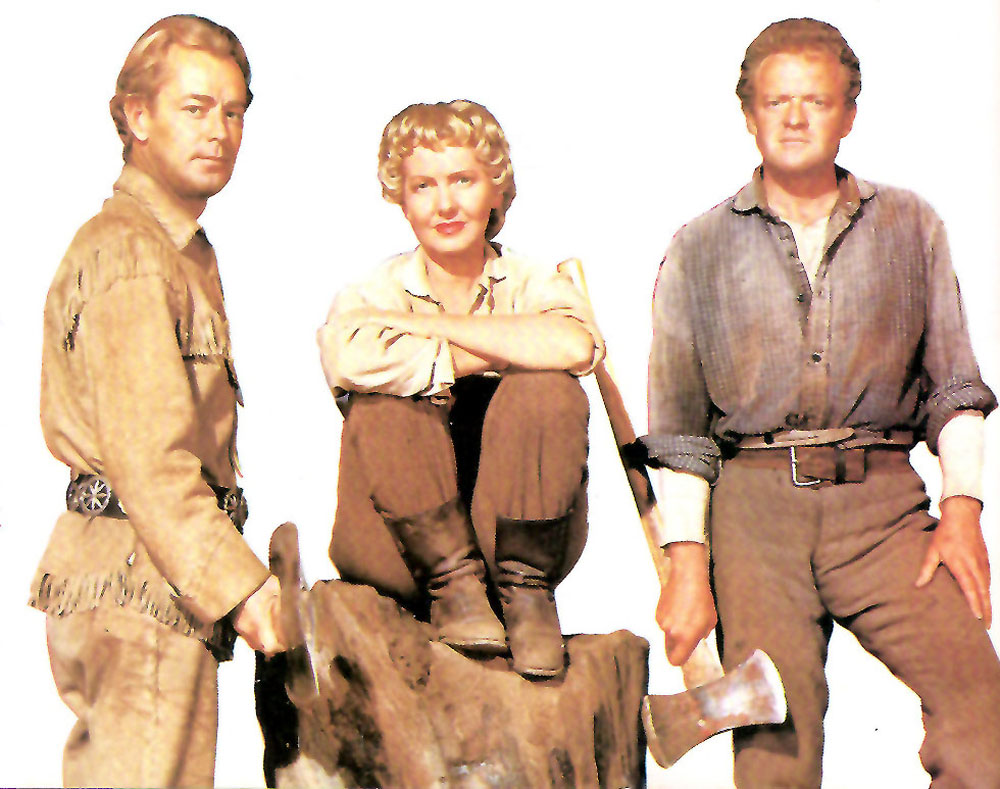 My personal favorite among the scheduled TCM films is Shane (1953). George Stevens’ elegiac Western shows that violence is costly to both heroes and villains, and that the Wild West wasn’t just wild – it was also beautiful, poetic, and awful lonely. Arthur doesn’t have all that much to do in it, but her presence in the film is crucial for it makes one understand why Alan Ladd’s itinerant gunslinger (above, with Arthur and Van Heflin) would both want to settle down and then leave for good. Unfortunately, though a major box office hit, Shane turned out to be Arthur’s last film.

Two lesser-known Arthur vehicles, The Devil and Miss Jones (1941) and If You Could Only Cook (1935), though a bit flawed, also have their charms. For one, Arthur is her usual warm, funny self in both of them; additionally, in the former she’s beautifully assisted by Best Supporting Actor Oscar-nominee Charles Coburn (actually the film’s male lead) and in the latter she’s paired with classy Herbert Marshall.

Written by Norman Krasna, The Devil and Miss Jones (above) pits labor (Arthur, Robert Cummings, and Spring Byington) against capital (department-store tycoon Coburn). Needless to say – especially considering that the film was directed by ardent right-winger Sam Wood – both sides end up realizing that they have more in common than they thought, and that seemingly ruthless capitalists are actually kind and compassionate at heart. Arthur’s then husband, Frank Ross produced. (I should add that The Devil and Miss Jones has absolutely nothing to do with the XXX-rated Georgina Spelvin cause célèbre of the early ’70s, actually titled Devil in Miss Jones.)

Directed by the competent but uninspired William A. Seiter, the screwballish social comedy If You Could Only Cook places an auto magnate (pretending to be your average unemployed Joe) side by side with an (actual) unemployed cook. Needless to say – especially considering that the film was made during the Great Depression, a time of economic and political upheaval – after the truth comes out both sides end up realizing that love conquers all, including class divisions. (Heck, why not? One has to believe in something.) Too bad that Ernst Lubitsch or George Cukor didn’t get to direct this one, as Howard J. Green and Gertrude Purcell’s screenplay has lots of good lines and situations even if it loses comic steam near the end.

There are quite a few Jean Arthur movies that are hard to find as they’re unavailable on DVD/VHS and haven’t been shown on television in years (if at all). For Jean Arthur Day, TCM has come up with only one premiere, the 1934 melo Whirlpool, which is certainly better than nothing. However, it would be cool if they unearthed other rarities (in case they aren’t lost) such as The Past of Mary Holmes, Virtuous Husbands, The Defense Rests, Ex-Bad Boy, Get That Venus, and myriad other Jean Arthur flicks that, whether good, bad, or godawful, I for one would be happy to check out.

6:00 AM Adventure in Manhattan (1936)
A hotshot reporter and a temperamental actress clash when he investigates the backer of her latest show. Cast: Jean Arthur, Joel McCrea, Reginald Owen. Director: Edward Ludwig. Black and white. 73 min.

8:45 AM Only Angels Have Wings (1939)
A team of flyers risks their lives to deliver the mail in a mountainous South American country. Cast: Cary Grant, Jean Arthur, Rita Hayworth. Director: Howard Hawks. Black and white. 121 min.

5:00 PM You Can’t Take It With You (1938)
A girl from a family of freethinkers falls for the son of a conservative banker. Cast: Jean Arthur, Lionel Barrymore, James Stewart. Director: Frank Capra. Black and white. 126 min.

8:45 PM If You Could Only Cook (1935)
An unhappy executive gets a job as a butler on a lark, only to fall for the family cook. Cast: Herbert Marshall, Jean Arthur, Leo Carillo. Director: William A. Seiter. Black and white. 72 min.