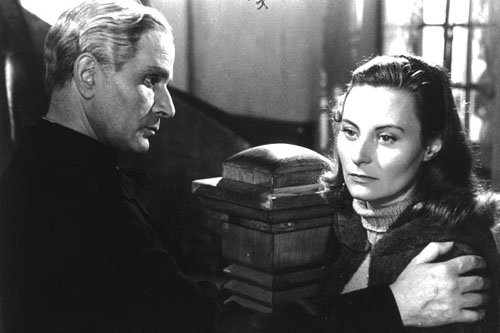 “I’m the last survivor of one section of the history of French cinema,” director-screenwriter Jean Delannoy declared in 2004.

The “last survivor” died yesterday, June 18, at his home in Guainville, in southwest France. He was 100. During his six-decade career, Delannoy directed many of the most illustrious names in international cinema, among them Michèle Morgan, Jean Gabin, Pierre Fresnay, Jean Marais, Gina Lollobrigida, Micheline Presle, Raf Vallone, Annie Girardot, Stephen Boyd, Anthony Quinn, and Pierre Blanchar.

Among Delannoy’s best-known films are The Eternal Return (1943), Jean Cocteau’s revamping of the Tristan and Isolde love story; Cannes Film Festival co-winner La Symphonie Pastorale (above, 1946), based on André Gide’s novel about a minister (Pierre Blanchar) who falls in love with a blind woman (Michèle Morgan); and the flop The Hunchback of Notre Dame (1957), with Anthony Quinn in the title role and Gina Lollobrigida as Esmeralda.

Even before The Hunchback of Notre Dame, the future Nouvelle Vague auteurs expressed their distaste for Delannoy’s body of work. In 1954, 21-year-old Cahiers du Cinéma critic François Truffaut wrote the article “A Certain Trend in French Film,” in which he (unfairly) attacked Delannoy and other established French commercial filmmakers – Claude Autant-Lara, Julien Duvivier, René Clément, Yves Allégret – for lacking the ability to imprint their personality onto their films. As per Truffaut (whose films often suffered from mediocre writing and direction), Delannoy, Autant-Lara, et al. made quality films only when they filmed screenplays by quality writers.

“Jean Delannoy, for example, conceives of himself gladly as a mystic moralist,” Truffaut sneered. “But the trifling lowness of Le Garçon sauvage, the meanness of La Minute de vérité, the triviality of La Route Napoléon show very well the irregularity of that calling.”

In a letter, Delannoy stated that Truffaut’s criticism was “so low that I have never encountered anything like it in my 20 years in the profession.” (The non-auteur Delannoy, by the way, wrote or co-wrote nearly 30 screenplays.)

Born on January 12, 1908, in the Parisian suburb of Noisy-le-Sec, Delannoy studied philosophy at the Sorbonne, and then busied himself with various occupations, including journalist, decorator, and actor. He reportedly had small roles in André Hugon’s La Grande passion (1928) and René Barberis’ Casanova (1934), starring Ivan Mosjoukine in the title role.

Delannoy’s film career behind the cameras began when he started working as an editor at the Paramount Studios complex in Joinville, near Paris. Among the handful of films he edited were King of the Champs-Élysées (1934), a French-made Buster Keaton vehicle, and Michel Strogoff (1935), starring Anton Walbrook.

Delannoy’s first film as a director was the musical comedy Paris-Deauville (1934). His first hit was released during World War II, Pontcarral, colonel d’empire (1941), starring Pierre Blanchar, which some saw as a denunciation of the Vichy regime.

Among his other films in the ensuing decades were Les Jeux sont faits / The Chips Are Down (1947), an after-life romance starring Micheline Presle; Le Secret de Mayerling (1949), which had the Mayerling lovers murdered; Dieu a besoin des hommes / God Needs Men (1950), in which a sacristan (Pierre Fresnay) takes the role of a priest in an isolated community; and the infidelity drama La Minute de vérité (1952), starring Jean Gabin, Michèle Morgan, and Daniel Gélin.

Writing in The New York Times in 1951, Bosley Crowther called Dieu a besoin des hommes, winner of the International Prize at the Venice Festival, a “film of rare and simple beauty … Blessed with a powerful performance by Pierre Fresnay in the leading role … this strikingly frank and austere drama goes boldly and squarely to the heart of the fundamental nature of religion in the best tradition of French intellect and art.”

Les Amitiés particulières / This Special Friendship (1964), which Jean Aurenche and Pierre Bost adapted from Roger Peyrefitte’s novel about a tragic love affair between two boys at a Catholic school, remains one of the most touching gay-themed films ever made.

From the mid-1960s on, Delannoy’s film work became more sporadic – and more criticized. (He also directed a handful of TV movies.) Among his last feature films were the crime drama La Peau de torpedo (1970), starring Stéphane Audran, Klaus Kinski, and Lilli Palmer; the crime comedy Pas folle la guêpe (1972), with veteran Françoise Rosay; and Bernadette (1988) and La Passion de Bernadette (1989), a two-part look at the Lourdes girl who claimed to have seen the Virgin Mary. His last effort was the poorly received Marie de Nazareth (1995).

Delannoy was made an officer of the Legion of Honor, a Commander of Arts and Letters, and a Commander of the National Order of Merit. He also received an honorary César in 1986.

Several of Delannoy’s films, including The Eternal Return, Le Garçon Sauvage, and This Special Friendship, ran into censorship problems in the United States and the United Kingdom. In an article he wrote for The New York Times in the early 1950s, Delannoy complained about scissor-happy puritans.

“By its methods, censorship believes it has protected youth’s soul, whereas it has, at one and the same time, done it violence and dulled it.”

A reappraisal of Jean Delannoy’s work is long overdue.