Jean Dujardin made film-award history after he won the 2012 Best Actor Academy Award for his performance as a fading silent film matinee idol in Michel Hazanavicius’ The Artist. But before I proceed, I must say that those who compare Dujardin with former Best Actor Oscar winner Roberto Benigni (Life Is Beautiful, 1998) should watch more French and Italian films. The comparison is ludicrous. What Dujardin and Benigni have in common is that they’ve both made comedies and neither one of them speaks very good English. That’s it. (Image: Todd Wawrychuk / © A.M.P.A.S.)

As a result of his victory, Dujardin has become the first Frenchman to take home an Oscar in the acting categories. Charles Boyer, Maurice Chevalier, and Gérard Depardieu had all been nominated, but had never won. I should add that French-born actresses have had better luck at the Academy Awards, as can be attested by Best Actress winners Claudette Colbert (Frank Capra’s It Happened One Night, 1934), Simone Signoret (Jack Clayton’s Room at the Top, 1959), and Marion Cotillard (Olivier Dahan’s Ma Vie en Rose, 2007), and Best Supporting Actress winner Juliette Binoche (Anthony Minghella’s The English Patient, 1996).

Sophia Loren was another triple winner, but she failed to be nominated for a Golden Globe for Vittorio de Sica’s Two Women (1961). Loren may have been ineligible at the time, as de Sica’s World War II drama is in Italian.

Sally Field won Oscar / Cannes / Golden Globe – but wasn’t even nominated for a BAFTA Award for her performance in Martin Ritt’s Norma Rae (1979).

And that leaves Holly Hunter as Jean Dujardin’s female match: the only actress to date to have won Oscar / Golden Globe / Cannes / BAFTA, for Jane Campion’s The Piano (1993).

Note: As pointed out by a commenter (see below), Jean Dujardin also won the SAG Award for Best Actor. I left that one out because the SAG Awards are fairly new – less than two decades old. And as pointed out by another commenter, Inglourious Basterds’ Christoph Waltz also won Oscar / Cannes / BAFTA / Golden Globe / and SAG Award. Though I certainly should have mentioned Waltz in this piece, apart from his Best Actor Cannes victory he was a Best Supporting Actor winner. Dujardin’s wins were all as a lead. 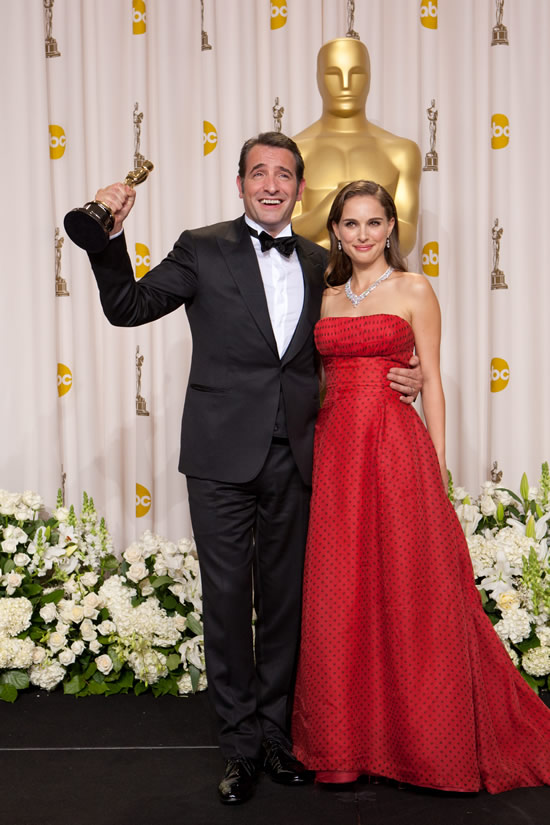 The Artist‘s Oscar-winning actor Jean Dujardin poses backstage with his statuette and a (possibly) smiling Natalie Portman, last year’s Best Actress for her performance as an unbalanced ballerina in Darren Aronofsky’s Black Swan. The 2012 Academy Awards was held at the Hollywood and Highland Center on February 26. (Image: Richard D. Salyer / © A.M.P.A.S.)

Among Dujardin’s movie credits are two James Bond-ish spoofs directed by Michel Hazanavicius: OSS 117: Cairo, Nest of Spies and OSS 117: Lost in Rio. In addition, Dujardin starred or was featured in numerous French productions, among them Ca$h, Brice de Nice / The Brice Man, Lucky Luke and the Daltons, Welcome to the Roses, The Clink of Ice, Little White Lies, and Nicole Garcia’s A View of Love, featuring Marie-Josée Croze and Toni Servillo.

Much of Jean Dujardin’s backstage chat with journalists was in French. Hence, the Academy transcript is incomplete. Below is the English portion of the q&a, courtesy of AMPAS. Note Dujardin’s “I said … Ah, yes. I’m sorry.”

Q. Sir, with your great success in this silent movie, are you concerned with the effort to make a transition into talkies?

A. In America? I’m not American actor. I’m a French actor, and I continue in France and but it’s possible. It’s … (via an interpreter) If he can make another silent movie in America, he’d like to. He knows he’ll always be a French actor in America so he should find roles that, you know, those kinds of roles. But he has a few ideas that he wants to develop.

Q. At the end of your acceptance speech, did you perhaps drop the French equivalent of the F word?

Q. And I’m wondering where your four-legged friend is, Uggie, and how you’re going to celebrate with him?

A. Uggie? Tonight, Uggie is home in Miami, I think. So but, yes. He went to bed already. [Not so; Uggie could be seen posing with the Artist crowd later that evening. Unless that was his stand-in/stunt double, Dash.]

Q. Hello, Jean. I would like to know what was the process of creating this character and was it any different from the way you created other talking characters?

A. It was not really intellectual, and I’m not an intellectual. No, I watched a lot of movies. Douglas Fairbanks movies, Gene Kelly movies. I had fun pretending to be a movie star in 1920s.

Last year, Portman was seen in the critical and box office disaster Your Highness, opposite James Franco; the Marvel movie Thor, directed by Kenneth Branagh and starring Chris Hemsworth in the title role; and the popular romantic comedy No Strings Attached, with Ashton Kutcher. There are no Natalie Portman movies scheduled for 2012, though she’s currently filming Terrence Malick’s Lawless, to open in 2013. Her Lawless co-stars are Rooney Mara, Ryan Gosling, Cate Blanchett, Christian Bale, and Haley Bennett.

Dujardin not only became the first Frenchman to win an Oscar in the acting categories, but he also became the first Oscar winner (on record, at least) to say the French equivalent of the exclamation (not the verb) fuck! — putain!. Perhaps because most Americans wouldn’t know the difference between putain, pute (“whore”), or the English verb “to put,” ABC didn’t bother bleeping or muting Dujardin’s, huh, exuberance. (Last year’s Best Supporting Actress winner Melissa Leo is the first person on record to say some variation of the word “fuck” while accepting an Oscar.)

Below is Dujardin’s Oscar acceptance speech, courtesy of AMPAS.

Thank you. Oui! [In reply to someone yelling in the audience.] I love your country.

Thank you to the Academy. It’s funny because in 1929 it wasn’t Billy Crystal, but Douglas Fairbanks who hosted the first Oscar ceremony. Tickets cost five dollars and it lasted 15 minutes. Times have changed. So thank you Douglas Fairbanks.

Yes, Melissa, your grandfather’s [Fairbanks’] spirit and joie de vivre inspired me for this role. And so many of you here tonight have inspired me. Thank you Michel, thank you for this incredible gift. Thank you my wonderful partner Bérénice Bejo. Thank you the wonderful cast and crew. My wife, I love you. Kisses Simon, Jules, Chloé [Dujardin’s sons with his first wife, and daughter with Lamy]. And if George Valentin could speak, he’d say, ‘Putain! Génial! Merci! Formidable! Merci beaucoup.’ I love you.

Ironically, it took a Frenchman to mention Douglas Fairbanks, one of the Academy of Motion Picture Arts and Sciences founders, for the first time at an Oscar ceremony in (quite possibly) the last seventy years. (Most present at the ex-Kodak Theater probably had never heard of him.) Fairbanks’ grandiose style was also a clear inspiration for Dujardin’s George Valentin in the movie.

The list of Frenchwomen who either won or were nominated for Oscars in the acting categories is much more extensive. The French-born, American-raised Claudette Colbert was the Best Actress of 1934 for Frank Capra’s comedy It Happened One Night. The other French Best Actress Oscar winners are Simone Signoret for Jack Clayton’s 1959 British drama Room at the Top and Marion Cotillard for Olivier Dahan’s French-language Edith Piaf biopic La Vie en Rose.

Additionally, Juliette Binoche was a surprise Best Supporting Actress Oscar winner for Anthony Minghella’s The English Patient. Hollywood veteran Lauren Bacall was the favorite that year. (Much like The Artist, The English Patient was distributed in North America by a Harvey Weinstein company – at that time, Miramax.)

Other French nominees in the acting categories were Leslie Caron for Charles Walters’ Lili (1953) and Bryan Forbes’ The L-Shaped Room (1963); Anouk Aimée for Claude Lelouch’s A Man and a Woman (1966); Isabelle Adjani for François Truffaut’s The Story of Adele H. (1975) and Bruno Nuytten’s Camille Claudel (1989); Marie-Christine Barrault for Jean-Charles Tacchella’s Cousin, Cousine (1976); Catherine Deneuve for Régis Wargnier’s Indochine (1992); in addition to Binoche for Lasse Hallström’s Chocolat (2000), and Colbert for Gregory La Cava’s Private Worlds (1935) and John Cromwell’s Since You Went Away (1944).

Besides Binoche, there have been only two other French nominees for Best Supporting Actress: Colette Marchand for John Huston’s Moulin Rouge (1952) and the Argentinean-born Bérénice Bejo for The Artist (2011). Valentina Cortese was nominated for Truffaut’s French-made Day for Night (Oscar 1974), but Cortese is Italian.

Best Actor Academy Award nominee Jean Dujardin – for Michel Hazanavicius’ The Artist – is a first-time Oscar nominee and only the fourth Frenchman to be shortlisted for an Academy Award in the acting categories. Dujardin’s predecessors were Best Actor nominees Maurice Chevalier for the Ernst Lubitsch musicals The Big Pond and The Love Parade (1929-30); Charles Boyer for Clarence Brown’s Conquest (1937), John Cromwell’s Algiers (1938), George Cukor’s Gaslight (1944), and Joshua Logan’s Fanny (1961); and Gérard Depardieu, the only actor nominated for a French-speaking role, for Jean-Paul Rappeneau’s Cyrano de Bergerac (1990).

None of those three performers ended up taking home the Best Actor Oscar statuette, though at the 1959 Academy Awards ceremony Chevalier was awarded an Honorary Oscar “for his contributions to the world of entertainment for more than half a century.” (Not coincidentally, that was the year he failed to be nominated for Vincente Minnelli’s Best Picture winner Gigi.)

Thanks to The Artist‘s popularity among movie-loving circles – and to The Weinstein Company’s all-powerful Oscar machinery – Dujardin has a better chance at winning. Even so, local boy George Clooney, the star of Alexander Payne’s The Descendants, will be hard to beat. Clooney has been the North American critics’ favorite this awards season, and has taken home the Golden Globe for Best Actor in a Motion Picture Drama. Dujardin, for his part, was the Golden Globe winner for Best Actor in a Motion Picture Comedy or Musical.

Jean Dujardin backstage getting licked by Uggie during the 84th Academy Awards Awards ceremony held at the Hollywood and Highland Center on Feb. 26, 2012. Jean Dujardin was the year’s Best Actor winner for his performance as a fading silent film star in Michel Hazanavicius’ The Artist. Uggie was a Golden Collar winner for his star-making turn as the fading silent star’s faithful animal companion.

Now, months before Dujardin became the first Frenchman to win an Oscar in the acting categories, he had already been chosen as the Best Actor at the Cannes Film Festival. Though not a common occurrence – chiefly because Cannes winners are usually non-Americans performing in non-English-speaking roles – there have been a number of Cannes Best Actor / Best Actress winners who went on to win or be nominated for Oscars. Those include Christoph Waltz for Quentin Tarantino’s Inglourious Basterds, William Hurt for Hector Babenco’s Kiss of the Spider Woman, Holly Hunter for Jane Campion’s The Piano, Valerie Perrine for Bob Fosse’s Lenny, Anne Bancroft for Jack Clayton’s The Pumpkin Eater, and, at the birth of the festival, Ray Milland for Billy Wilder’s The Lost Weekend.

So far this century, one Best Actress winner at Cannes (Penélope Cruz for Pedro Almodóvar’s Volver, 2006) and three Best Actor winners (Christoph Waltz, 2009; Javier Bardem for Alejandro González Iñárritu’s Biutiful, 2010; Jean Dujardin, 2011) have gone on to be shortlisted by the Academy. Both Dujardin and Waltz (as Best Supporting Actor) won the Oscar.

I know he was supporting, but found it a bit strange that you don’t even mention Christoph Waltz who followed up his Best Actor award in Cannes with a BAFTA award, a Globe, a SAG award and an Oscar.

Thanks for the reminder.

Christoph Waltz was mentioned in my series of tweets about the multiple Jean Dujardin victories, but I failed to include him in the article. I’ve just updated it.

He also won the SAG award. A clean sweep except for his native Caesar award (which will probably elude him for decades, to compensate for all this “good luck” bestowed on a “clown”:PP)