“Thank you, Mom and Dad, for turning me on to such a groovy profession. Oh, my dad and my mom, they loved show biz so much. I remember my mom, getting all of us kids to entertain at her parties. You know, my dad sitting me on his bed and teaching me all of the basics of acting for a role in Sea Hunt.

“They loved show biz so much and I feel an extension of them. You know, this, this is honoring them as much as it is me. I wanna, I wanna thank Scott Cooper, our wonderful director, for his knowledge of film and country music and for his ability to instill self-confidence in his actors. I thank you for that. Scott, where are you? Raise your hand, man. Yeah! Scotty! Thank you for that, Scott man! And thank you for assembling such a wonderful cast. Maggie Gyllenhaal, Colin [Farrell], wherever he is backstage. And Bobby Duvall, so wonderful you guys brought your heart and soul. I want to thank Barry Markowitz, our wonderful DP, he did such a brilliant job. Judy Cairo, our producer, and Fox Searchlight, our wonderful, our wonderful distributor. Thank you guys for keeping us all together and for making it all happen. T Bone Burnett and Stephen Bruton for bringing all of that great music and those wonderful musicians to the party, man.

“Thank you, guys. And I especially want to thank my gorgeous wife, Sue, we’ve been married 33 years. We have a beautiful family. Three girls, Isabelle, Jessie and Hayley. Thank you, guys. I wouldn’t be up here without you. Thank you so much.” 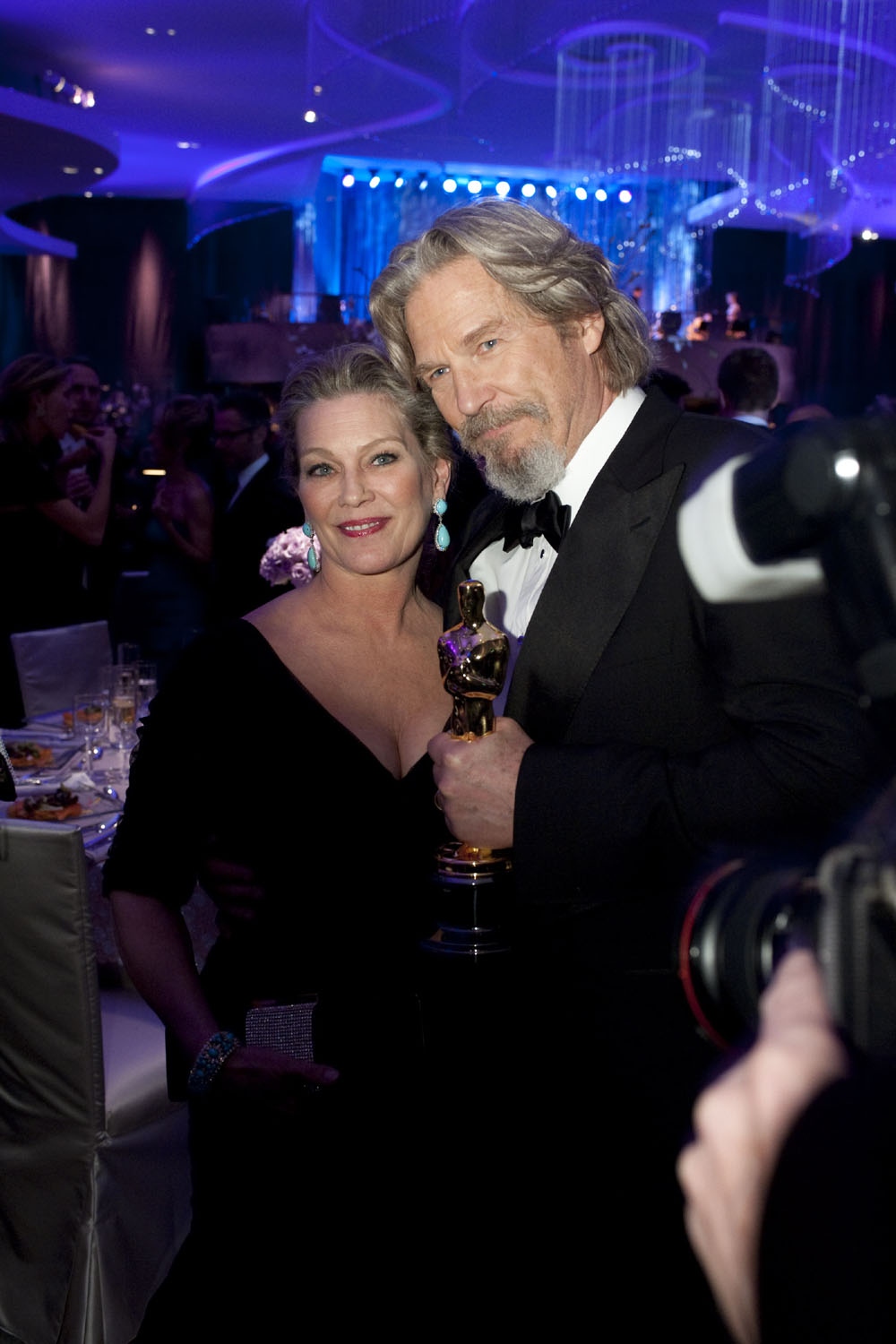 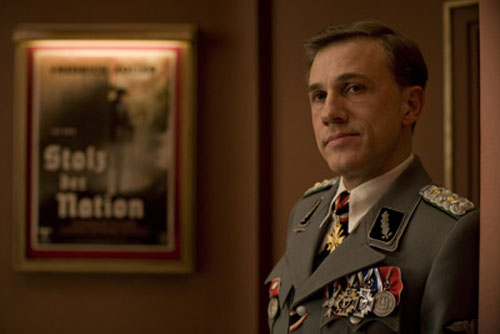 “Oscar and [presenter] Penélope [Cruz] that’s an über bingo. I always wanted to discover some new continent and I thought I had to go this way, and then I was introduced to Quentin Tarantino, who was putting together an expedition that was equipped by Harvey Weinstein and Lawrence Bender and David Linde, and he put this script in front of me and he said, ‘This is where we’re going, but we’re going the other way.’

“So Brad Pitt helped me on board and Diane Kruger was there Melanie Laurent and Denis Menochet and Bob Richardson and Sally Menke and Adam Schweitzer and Lisa Kasteler. Everybody helped me find a place. Universal and The Weinstein Company and ICM and Quentin, with his unorthodox methods of navigation, this fearless explorer, took this ship across and brought it in with flying colors and that’s why I’m here.

“And this is your welcoming embrace and there’s no way I can ever thank you enough, but I can start right now. Thank you.” 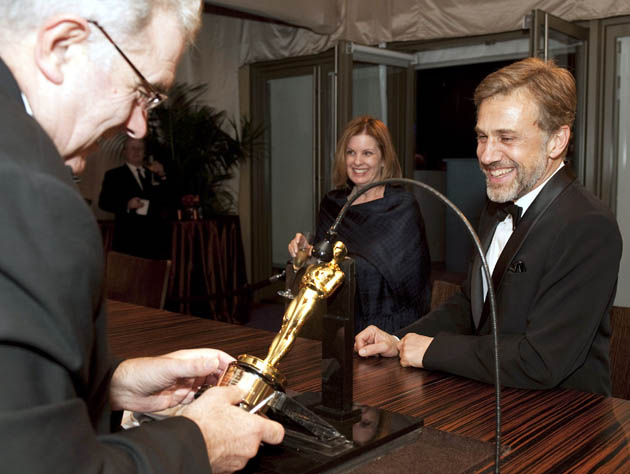 In the picture above, Best Supporting Actor Oscar winner Christoph Waltz, whose movie career began in the early ’80s (Kopfstand, Tristan and Isolde), watches as Mark Psaros engraves his Academy Award statuette at the Governors Ball. This year marked the first time that name-engraving was done “live” at the Governors Ball.

Waltz took home his engraved statuette for his performance as a Nazi in Quentin Tarantino’s box office hit Inglourious Basterds.

The 2010 Academy Awards ceremony was held on Sunday, March 7, at the Kodak Theatre in Hollywood. 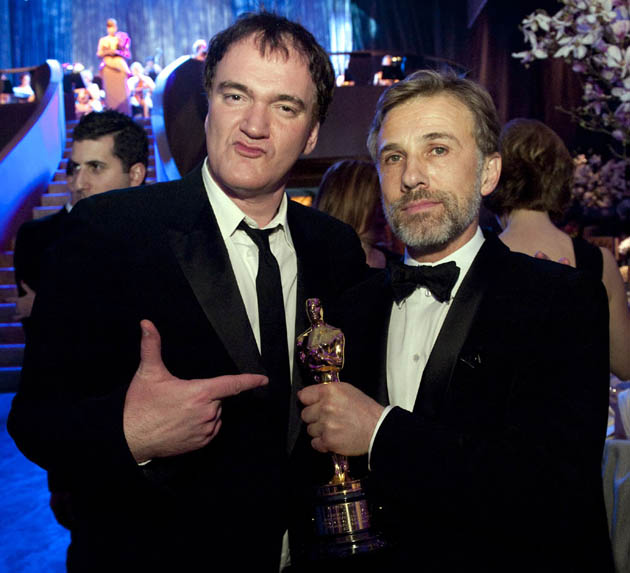 Christoph Waltz and Quentin Tarantino at the Governors Ball.

Seen above are Christoph Waltz and his Inglourious Basterds director, Quentin Tarantino at the Governors Ball. Tarantino was up for Best Director and Best Original Screenplay, but lost to, respectively, The Hurt Locker director Kathryn Bigelow and screenwriter Mark Boal. 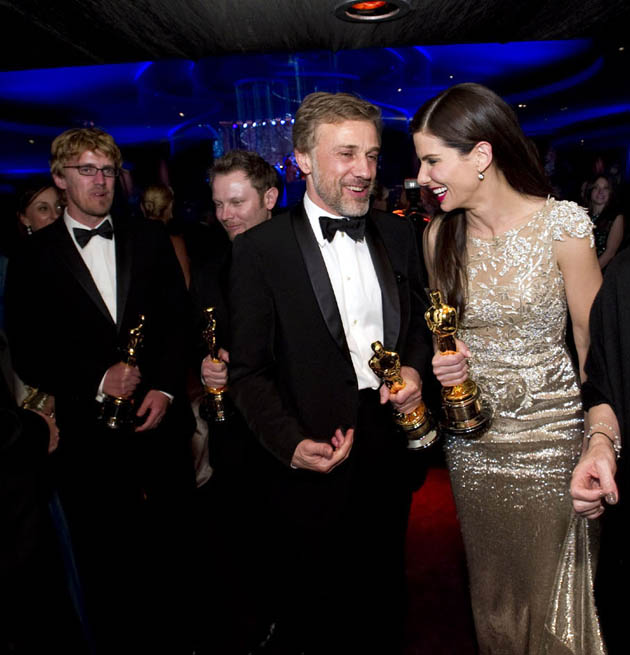 Christoph Waltz and Sandra Bullock (with Andrew Jones and Richard Baneham behind them).

Academy Award winners Christoph Waltz and Sandra Bullock (with fellow winners Andrew Jones and Richard Baneham in the background) arrive at the Governors Ball. Sandra Bullock won the Best Actress Oscar for her performance in John Lee Hancock’s drama The Blind Side, which turned out to be the biggest sleeper hit of 2009. Last year, Bullock was voted the top box office attraction in the United States. 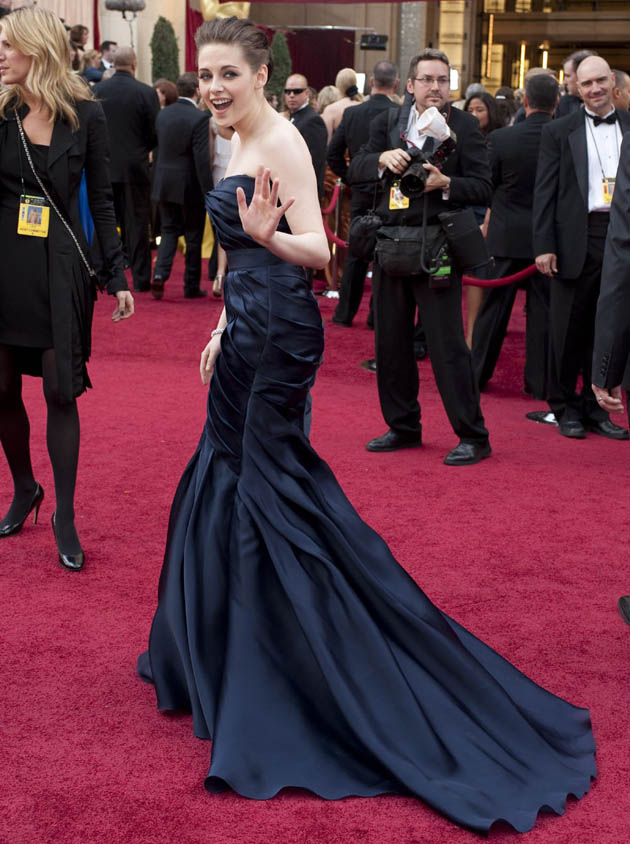 Kristen Stewart clearing her throat didn’t bother me like it did some people, but the horror movie tribute that followed felt completely out of place in a ceremony that didn’t feature any horror films in the running for Best Picture.

Perhaps a sci-fi homage would have been more appropriate, considering Avatar and District 9, but then The Twilight Saga: New Moon actors Stewart and Taylor Lautner would have had to present some other award. (Never mind the fact that despite the presence of vampires, werewolves, and – most frightening of all – humans, the Twilight Saga movies aren’t really horror films.)

Also, as it has been pointed out elsewhere, what Stewart and Lautner were given to recite was incorrect. There were Oscar-winning horror movies long after The Exorcist, including Alien, Aliens, and The Silence of the Lambs – which won Best Picture.

See below clip of Kristen Stewart and Taylor Lautner on the Oscar 2010 Red Carpet. 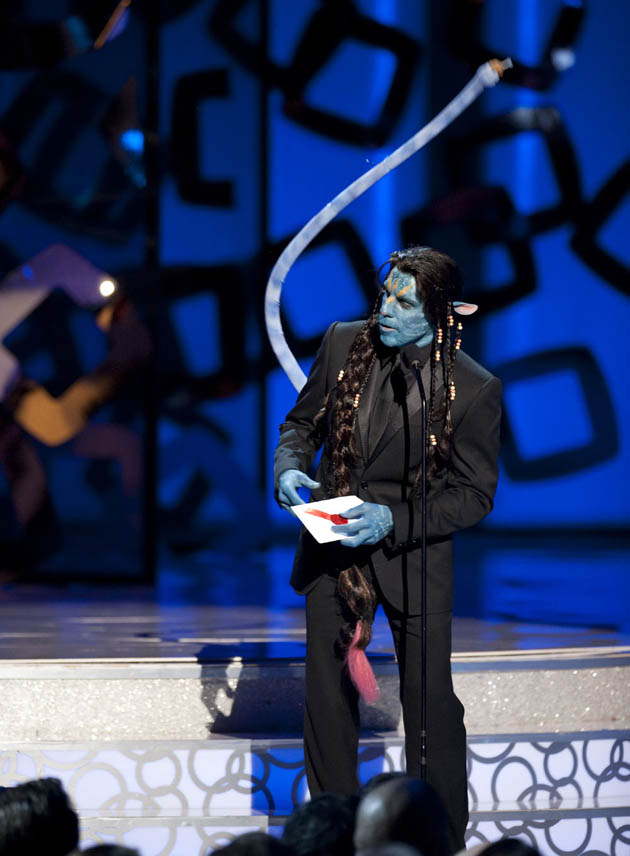 Ben Stiller as a Na’vi.

I did watch most of Ben Stiller’s introduction to the Best Make-Up Oscar, chiefly because I was wondering if he was going to mention Sacha Baron Cohen. Although Stiller’s humor is of the sort that brings out the axe murderer in me, I actually chuckled a couple of times thanks in part to reaction shots of James Cameron. (Cameron’s wife, Suzy Amis, seemed to be enjoying herself much more than he was at first.)

I also found it curious that Stiller was dressed up as a Na’vi, as Avatar didn’t get a Best Make-Up nomination. Much of the Na’vi look was created by computer graphics artists, not make-up artists. 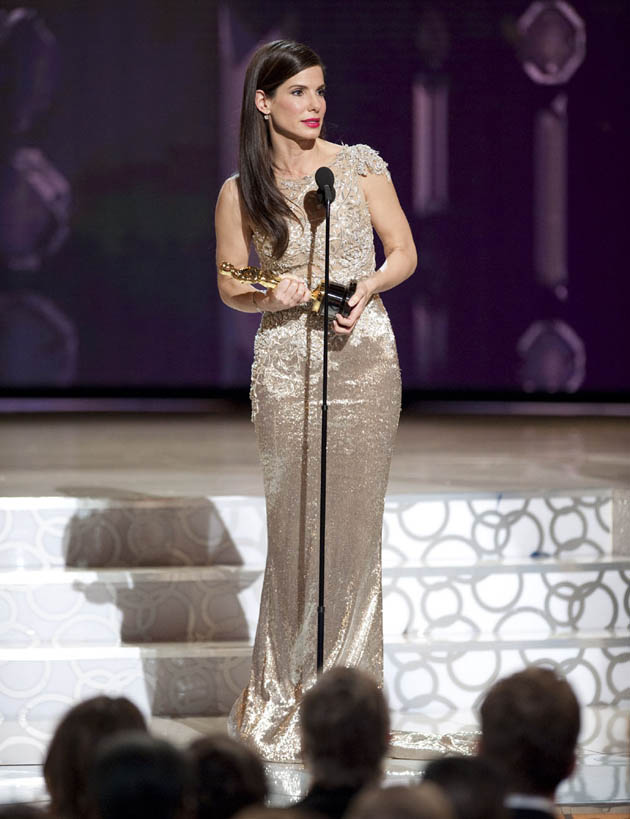 I watched the Best Actress announcement hoping against hope that Meryl Streep would pull an upset. She didn’t.

I started watching Sandra Bullock’s speech hoping she would mention her Worst Actress Razzie victory the previous evening, but gave up on it a few seconds later. After those “This Is Your Life” homages, I couldn’t take any more speeches – even though I’d only managed to watch the first minute or so of Michelle Pfeiffer’s homage to Jeff Bridges before tuning out. 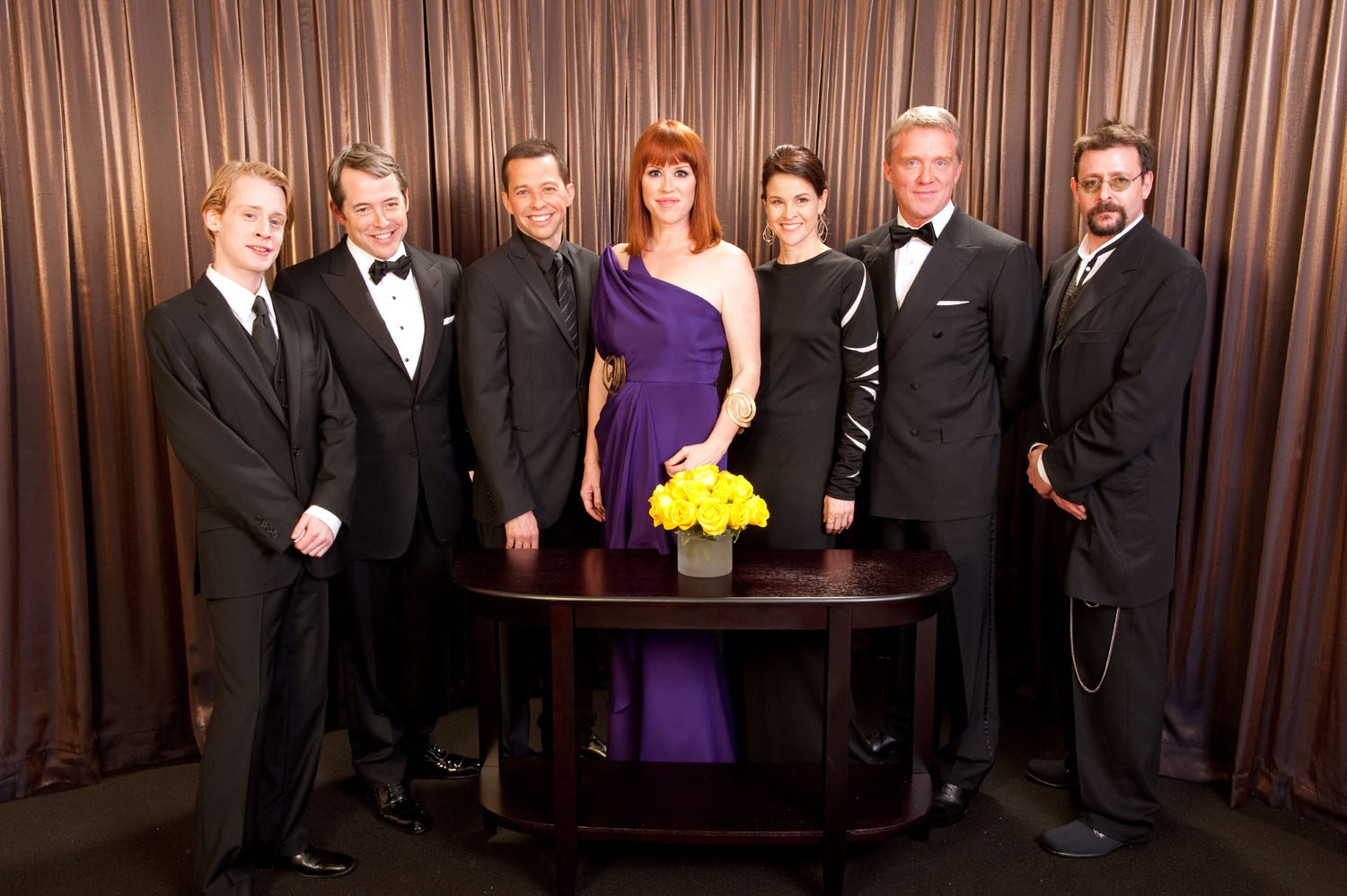 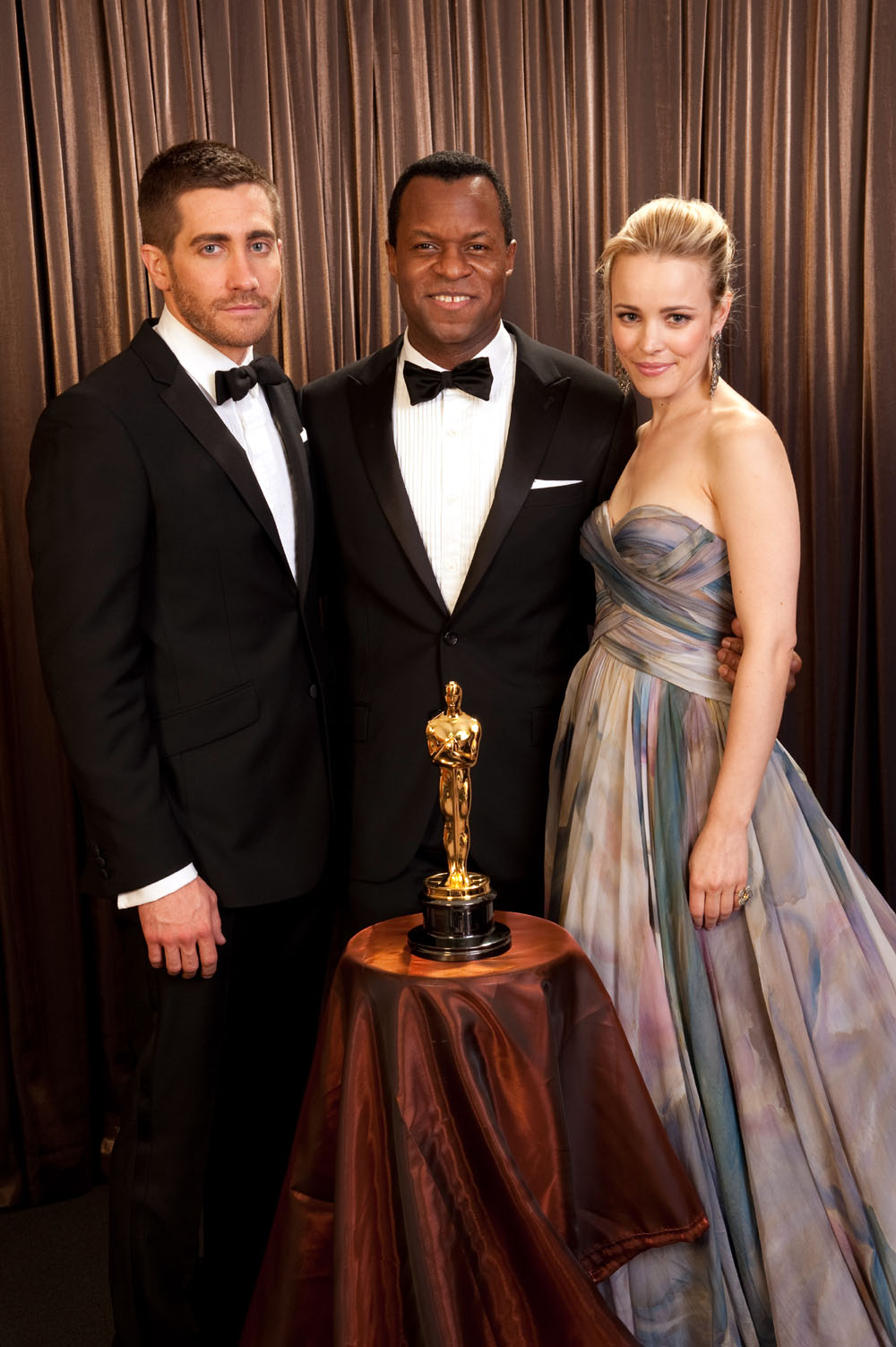 Jake Gyllenhaal and Rachel McAdams pose backstage with Best Adapted Screenplay winner Geoffrey Fletcher during the 82nd Annual Academy Awards at the Kodak Theatre in Hollywood, CA on Sunday, March 7, 2010. Fletcher was the surprise winner in the Best Adapted Screenplay category, as most pundits expected the Oscar to go to Jason Reitman and Sheldon Turner for Up in the Air. While on the Oscars’ red carpet, Jake Gyllenhaal mentioned his upcoming film, The Prince of Persia. Rachel McAdams recently played opposite Robert Downey Jr and Jude Law in Sherlock Holmes. 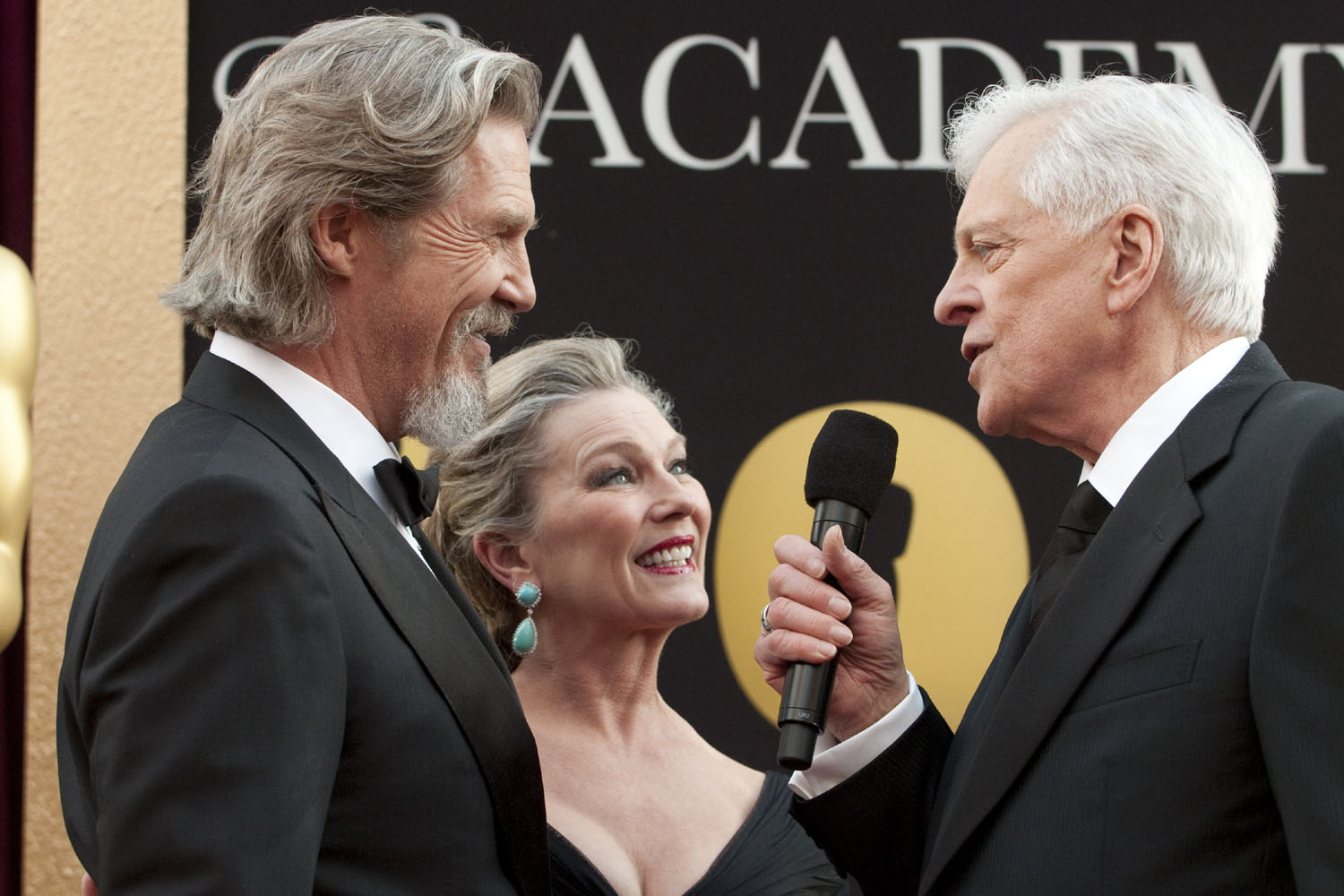 “Thank you so much. I’d like to thank my wife Anna, I love you more than rainbows, baby. My uncle Clay, my band, Jack Whigham, Scott Cooper, the cast of Crazy Heart, Jeff [Bridges] and Maggie [Gyllenhaal] and Colin [Farrell] and Mr. Bob [Robert Duvall]. Everyone at Fox Searchlight and Mr. T Bone Burnett and Stephen Bruton. Thank you all so much.” 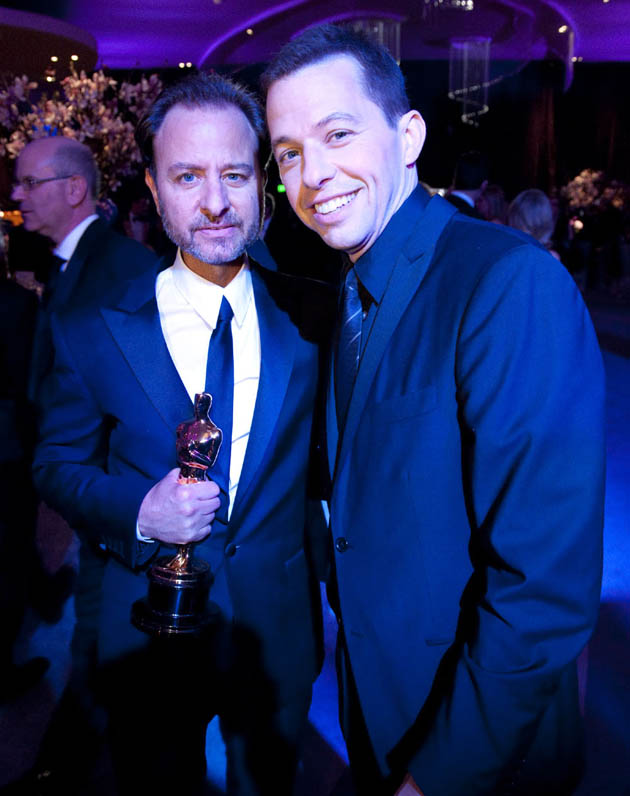 2010 Academy Award winner Fisher Stevens and actor Jon Cryer, a John Hughes alumnus and Two and a Half Men co-star, are seen above at the Governors Ball.

Actor-producer Fisher Stevens took home the Oscar for Best Documentary Feature for Louie Psihoyos’ The Cove, about dolphin-killing in Japan – humankind at its most bloodthirsty. Jon Cryer was in attendance to pay tribute to John Hughes; Cryer was featured in Pretty in Pink, with Molly Ringwald. 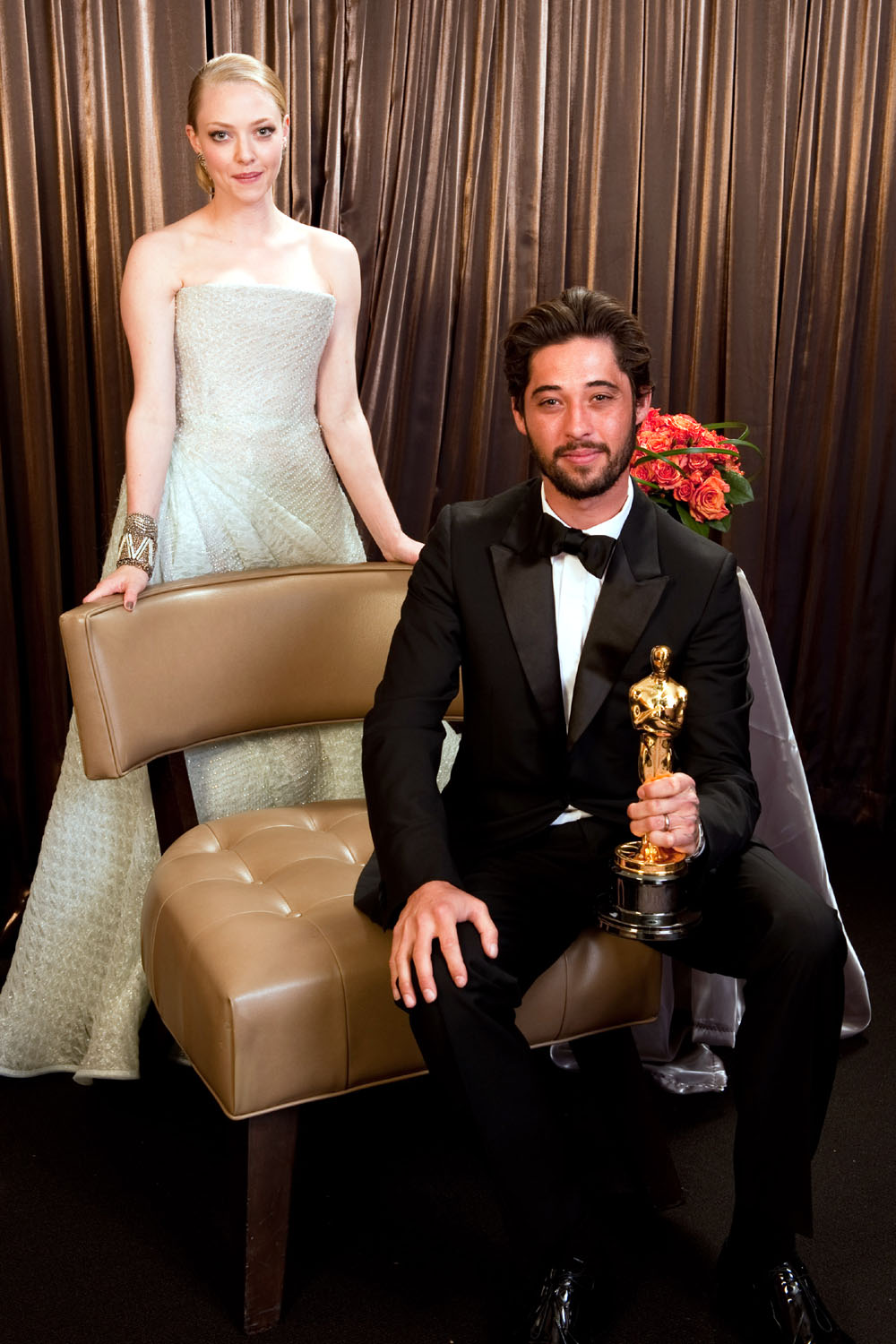 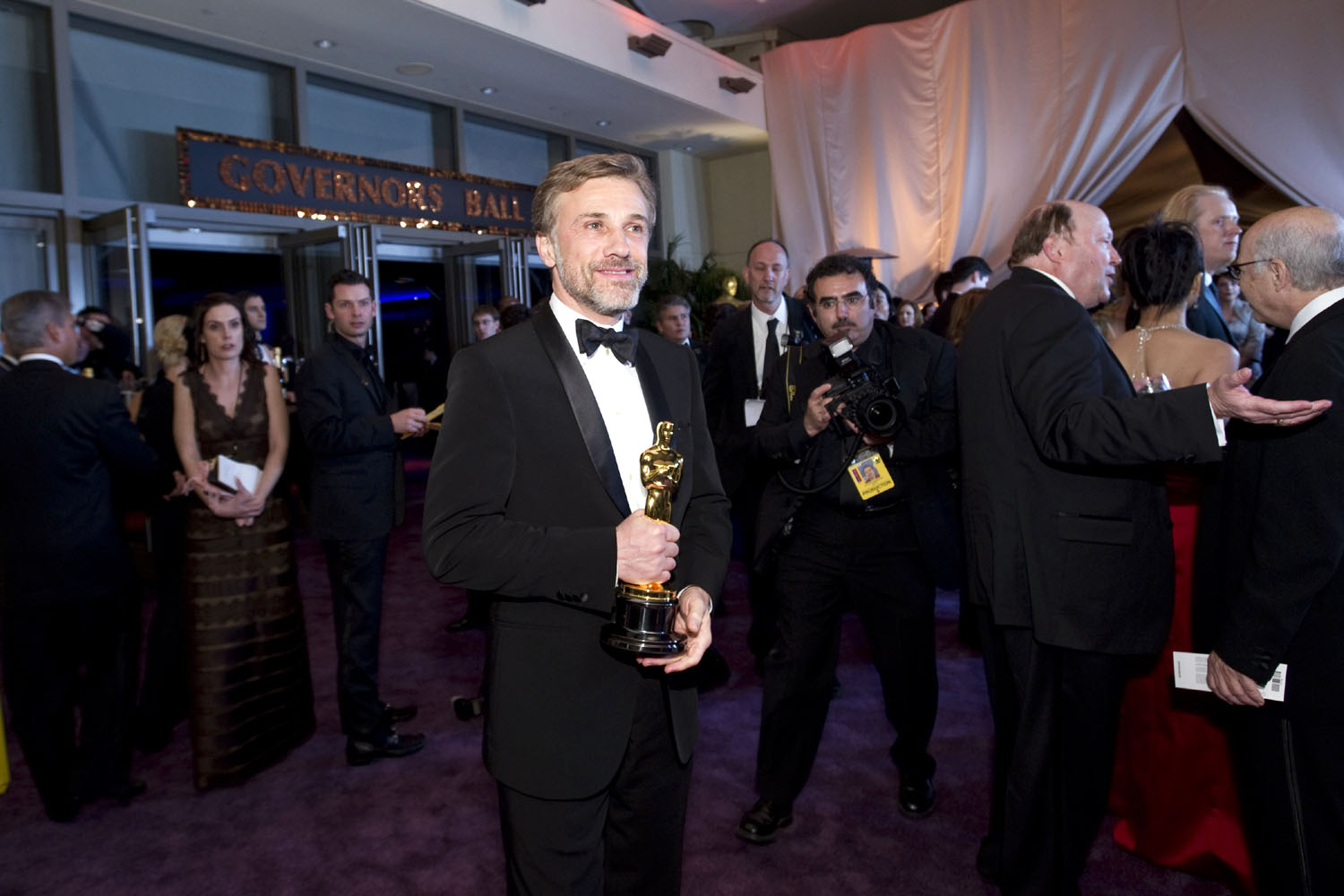 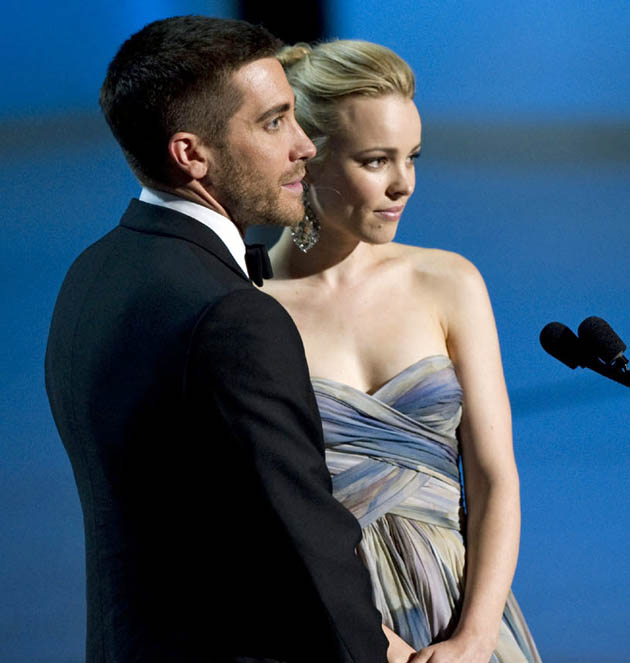 2008 Oscar presenter Jake Gyllenhaal has been shortlisted for one Academy Award: Best Supporting Actor for his performance as a gay cowboy in Ang Lee’s epoch-making romantic drama Brokeback Mountain (2005). Also in the cast: Heath Ledger as Gyllenhaal’s love interest, Anne Hathaway as his wife, Michelle Williams as his lover’s wife, Kate Mara as his lover’s daughter, and Randy Quaid as the two lovers’ boss.

In movies since 2002, the Canadian-born Rachel McAdams has been featured in about 10 films since then. Here is a trio of notable titles:

Nathaniel,
I’m so glad Meryl didn’t upset Sandra Bullock’s award season glory. That would have been a sad thing. Sorry you are disappointed, but her win is a huge victory for her…and her supporters and fans. I’m glad the Sandra bashing is now meaningless and can have no effect on Oscar outcomes or history.

I didn’t see it, cuz I after I found out that Sacha’s idea for the skit that would have been hilarious and the only reason I would have tuned in Oscar night. But when I heard that Stiller, dressed up, I thought at first that he was being a puppet by doing it, but now that I think it through again I see it as a sort of way of supporting his would be co-presenter. i wished he would have mentioned Sacha or something, y’know. I still don’t get why they nixed the skit, here’s an award show where a naked man has runned behind a presenter on live TV, but go figure.

I agree with your observation. Kristen’s clearing quite frankly didn’t bother me at all, but what they presented didn’t make sense. It didn’t fit in with the show. The fact that the “Twilight Saga: New Moon” was part of the montage of horror films was not appropriate, simply because “New Moon” wasn’t a horror film. It think that both Taylor and Kristen should have been given something else to present or whoever put the montage together could have done a better job.

Being given incorrect information to recite at the ceremony is unbelievable. Careless or mindless mistake ? This is incredible.

Kristen did a fine job. Can anyone imagine standing before the people you admire to read bogus material? She and Taylor both did fine, she was gorgeous and has nothing to be ashamed of. Sometimes people hate because they look for negative only. Stay strong Kristen you are a very hard working woman, the good comes with the bad. We love you.