Best Actress Academy Award winner Jennifer Jones, the star of the 1940s blockbusters The Song of Bernadette and Duel the Sun, and the wife of Gone with the Wind producer David O. Selznick, died of “natural causes” earlier today, Dec. 18, at her home in Malibu. Jones, who had been in ill health in recent years – according to a friend, her memory was all but gone – was 90.

Born Phylis Lee Isley on March 2, 1919, in Tulsa, Oklahoma, Jennifer Jones delivered a series of remarkable performances in some of the most important Hollywood productions of the 1940s and 1950s. Strangely, she hasn’t become neither a modern-day critical favorite like Ingrid Bergman or Carole Lombard, nor a “legend” on a par with the likes of Lauren Bacall, Lana Turner, or Hedy Lamarr.

Back in her heyday, however, Jones’ work was widely admired. James Agee called her star-making turn in The Song of Bernadette “one of the most impressive screen debuts [sic] in years,”[1] while Film Daily enthused about her performance in Love Is a Many-Splendored Thing, “It’s hard to believe that her measured steps, practiced speech and other Oriental characteristics are not her real personality.”

Nominated for a total of five Academy Awards, Jones took home the 1943 Best Actress Oscar for her portrayal of Bernadette Soubirous a.k.a. St. Bernadette – the young French peasant who claimed to see and talk to the Virgin Mary (a cameo by a pregnant Linda Darnell) – in Henry King’s The Song of Bernadette, one of the biggest box office hits of the decade.

Jones’ other Oscar nominations, all but one as Best Actress, were for the following:

Making her big-budget comeback in John Guillermin’s blockbuster The Towering Inferno (1974), Jennifer Jones – who, in the film’s most moving/shocking moment, plunges to her death after falling off an elevator – was a likely Best Supporting Actress Oscar nominee. Her paramour in the film, fellow veteran Fred Astaire (who was 20 years older than she was), did get shortlisted; however unfairly, Jones was bypassed.[2] 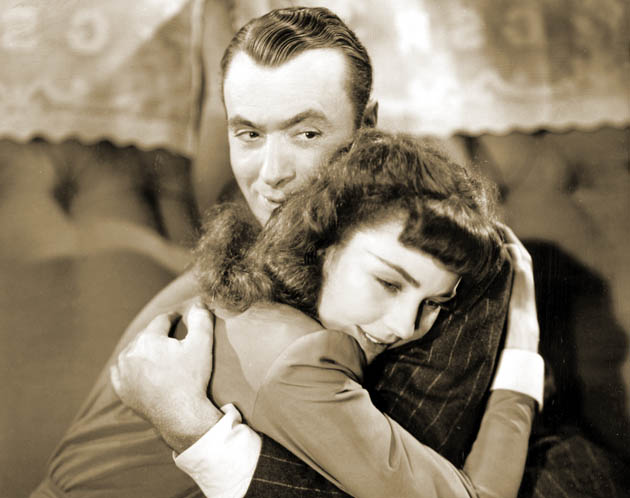 ‘Portrait of Jennie’ & ‘The Barretts of Wimpole Street’

Among Jennifer Jones’ other notable performances were those in the following:

Before marrying Selznick, the man who turned her into a star, Jones was the wife of actor Robert Walker, best known for playing the gay psycho in Alfred Hitchcock’s Strangers on a Train.

Walker became an alcoholic and died in 1951, at age 32. Selznick died in 1965. Jones later married multimillionaire Norton Simon, who died in 1993.

[1] Jennifer Jones had already been seen in a serial and a B Western opposite John Wayne before her “official” debut. She was then known as Phyllis Isley.)

[2] The 1974 Best Supporting Actress Oscar nominees were the following:

Coincidentally, the eventual winner, Ingrid Bergman, had lost the 1943 Best Actress Oscar to fellow David O. Selznick contract player Jennifer Jones. Bergman, on loan out to Paramount, had been in the running for Sam Wood’s For Whom the Bell Tolls.

The two had also competed with each other in 1945, when Bergman, on loan out to RKO, was in the running for Leo McCarey’s The Bells of St. Mary’s. The winner that year was Joan Crawford for Michael Curtiz’s Mildred Pierce. 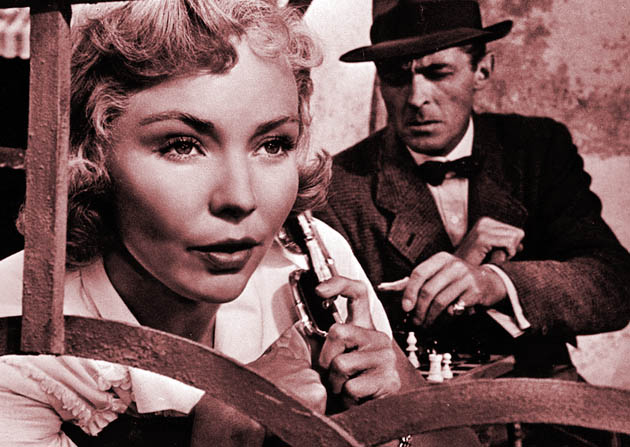 Jennifer Jones in Beat the Devil, with Edward Underdown.

Dec. 18 update: Turner Classic Movies will present a four-film tribute to Jennifer Jones, the Oscar-winning actress who died yesterday at age 90. The Jennifer Jones movie marathon will is scheduled for Thursday, Jan. 7, beginning at 8 p.m. ET. The four films are:

Other than duel in the Sun the other choices are at best a disappointment. Where is Song of Bernadette, her Oscar winning performance? Where is Portrait of Jennie?

Perhaps TCM should re-evaluate their selection. It is not too late to change the list!

Thank you Andre, I entirely agree with you. Though I do like ‘The Wild Heart’ also if only for more inclusion of Brian Easdales soundtrack and the odd scene not included in GTE. As you’ve said any Jennifer is better than none.

It’s not Louis Jourdan in the “Madame Bovary” photo. It is Alf Kjellin!

Damn!
Thanks!
The text has been amended. Thanks again.
I need glasses… But I’ll say that for myself: I did wonder why Jourdan looked blondish in the photo…

A pity TCM doesn’t show ‘Gone to Earth’.In my opinion her greatest film performance, and one the best films made in England. Certainly the best by a mile showing the British countryside and it’s people. I noticed most of the comments on the films to be shown either have low public esteme or a finding fault in other ways, then why show them. From a loyal fan. Thank you for this oppertunity.

I’d love to watch “Gone to Earth” as well. I’ve only seen the butchered American version, “The Wild Heart.” TCM does accept suggestions, so it might be a good idea to contact them and ask for GtE.
As for the movies being shown on TCM, with the exception of “Duel in the Sun” they’re certainly not Jennifer Jones’ best showcases — but then again, better three minor Jones efforts than none at all…
In fact, I wish someone somewhere would show “Angel, Angel Down We Go” and “The Idol,” two of her worst films, but again — Jennifer Jones is in them and that’s enough for me to want to check them out again.

Why did you leave out other memorable films Ms Jones starred in, such as; Since You Went Away,” “Song of Bernadette,” and “Portrait of Jennie,”to name a few.

As a kid I watched “Good Morning Miss Dove” a thousand times. The ending with Robert Stack carrying her out on that chair, is to me her spirit in her films, beautiful, firey, stoic, kind, exotic, demure, extraordinary. I love every single one of her movies. It is difficult to choose which I like the best, and I am ever drawn in immediately watching her acting full of strength and passion. She is my Hollywood Star Hero, and it is a very sad day indeed.