Jennifer Jones Movies: ‘Madame Bovary’ & ‘Since You Went Away’ 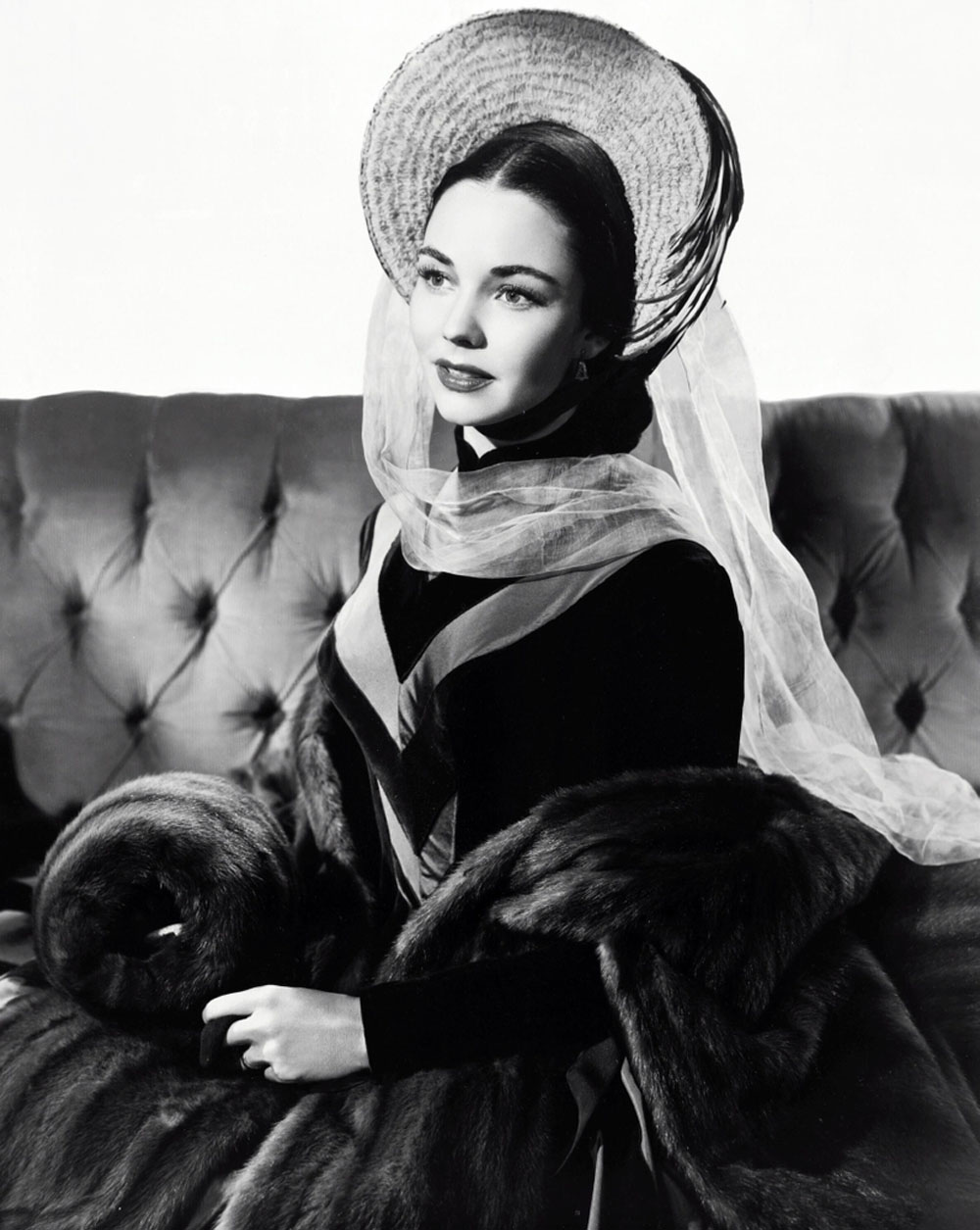 A very popular actress in the 1940s and 1950s, Jennifer Jones isn’t as well remembered today as she should be. After all, she won an Oscar in 1943 for her performance as Bernadette Soubirous in The Song of Bernadette, and starred in three of the biggest box office hits of the 1940s – the aforementioned The Song of Bernadette, Since You Went Away, and Duel in the Sun – and two major hits of the 1950s, Love Is a Many-Splendored Thing and A Farewell to Arms.

So, why isn’t she better remembered? Lack of good p.r., since that’s all that seems to count when it comes to popularity, whether we’re discussing new or old movie stars (or just about anything and anybody else, from Lindsay Lohan to universal health care).

Also, I believe that one problem — perhaps the chief problem — regarding the lack of appreciation of Jennifer Jones’ talent is the Marion Davies Syndrome. Many see Jones only as a David O. Selznick creation, much like they see Norma Shearer only as an Irving G. Thalberg creation and Marion Davies only as a William Randolph Hearst creation. The fact that those three actresses – and others like them – could have both powerful backers and powerful acting skills seems to be anathema to the way of thinking of many film critics and historians.

Anyhow, those unfamiliar with Jennifer Jones – who happens to be one of my all-time favorite performers – will get a chance to become acquainted with her work thanks to TCM, which will be screening 12 of her movies – or nearly half of her total film appearances.

Which ones would I recommend?

Well, all of them.

No, they’re not all great – or even good. But Jennifer Jones, even when she isn’t in top form, is invariably worth a look. And all the listed films have other points of interest besides Jones’ presence.

For instance, Indiscretion of an American Wife (a.k.a. Stazione Termini) may well be one of the least effective films directed by Vittorio De Sica – chiefly, perhaps, because it was butchered before its release. That said, this romantic melodrama does look great (cinematography by Aldo Graziati), it features Alessandro Cicognini’s melodious score, and both Jones and Montgomery Clift (above) deliver capable performances.

John Huston’s weak political thriller We Were Strangers is one of the few American movies of the period (or any period, for that matter) dealing directly with foreign politics – dictatorships, terrorists, and all – in this case set in Cuba. And it was made at a time when Hollywood was feeling pressured to stick to the status quo; else, filmmakers and other talent could be accused of trying to subvert American ideals.

Huston’s Beat the Devil – a sort of The Maltese Falcon sendup – is just plain bizarre. And so is Jones’ (blond!) wig in that film. But with a cast that includes Humphrey Bogart, Gina Lollobrigida, Robert Morley, Peter Lorre, and Edward Underdown, and considering that Huston also co-wrote the film with none other than Truman Capote, Beat the Devil must be seen at least once.

In addition to Carrie, TCM will also show for the first time Good Morning, Miss Dove, a sentimental melo in which Jones’ presence as a cantankerous teacher with a past is the film’s chief (perhaps only) interest.

Now, hopefully TCM will one day unearth Jones’ awful Angel, Angel Down We Go. One of those flicks that must be seen to be believed. Also, the restored version of Michael Powell and Emeric Pressburger’s Gone to Earth (released in truncated form as The Wild Heart in the US).

And while I’m at it… Why not the serial Dick Tracy’s G-Men and the Republic Western New Frontier?

5:00 AM We Were Strangers (1949)
A Cuban American returns to his homeland during the Revolution and becomes involved in an assassination attempt. Cast: Jennifer Jones, John Garfield, Pedro Armendariz. Director: John Huston. Black and white. 106 min.

8:30 AM Indiscretion of an American Wife (1954)
An American woman tries to break it off with her Italian lover. Cast: Jennifer Jones, Montgomery Clift, Richard Beymer. Director: Vittorio De Sica. Black and white. 63 min.

12:00 PM Since You Went Away (1944)
A mother and wife struggle to cope while her husband is off serving in World War II. Cast: Claudette Colbert, Jennifer Jones, Joseph Cotten. Director: John Cromwell. Black and white. 177 min.

‘The House at Riverton’ aka ‘The Shifting Fog’: Kate Morton Book Cover’s...

I think of Jennifer, not so much as a Great actress, as-in her best films- a lovely presence.. My own favorite is “A Portrait of Jennie”.  I think she was just enchanting in this.  I saw it first when I was a child and it has  stayed with me ever since.  I also have a great fondness for her in “Love Letters and in the little seen “Gone to Earth”(“The Wild Heart”).   Madame Bovary,  Duel in The Sun, Carrie, are also remembered.  I am not so fond of Ruby Gentry. Good morning Miss Dove etc finding her miscast.  I thought her work in “Tender Is The Night”  excellent and undervalued, and to be honest hers was the only female role in “The Towering Inferno”  of any dimension and thought she was neglected in the reviews.   Funny she was only about 5 years older than Paul Newman and there was no hint of romance while Fred Astaire-about 20 years older than her, she was supposed to be grateful for his attention at her age, I was furious that she met with such a traic end in the movie.

NOt one of the most beautiful women!??? YOU’RE crazy!!!!! Just look at her in duel in the sun… what a sexy stunning women… not too many women look like that but i sure wish they did!!!

Even though I’m in my low 30’s I have a growing dislike for contemporary movies, the stories are lacking, the language is foul, which led me to discover movies of the 30’s and 40’s in the last few years, they have interesting stories that are more intriguing than today’s movies, even if they don’t have the fancy special effects of today, and I love them, and my favorite actress is Jennifer Jones, I’ve seen about a dozen of her movies and I think their great, I love the characters she plays and her personality and looks just add to the character. I was thrilled when TCM showcased her for 24 hours, I especially liked Portrait of Jennie, Madame Bovary, The Barretts Of Wimpole Street and I really liked Love Letters, TCM should play these movies more often!

I agree that Jones was perfect in DULE IN THE SUN. Campy, but perfect.

There’s no camp in her great work in Carrie, a good movie that has been sadly neglected.

Jennifer Jones was magnificent in DUEL IN THE SUN. I don’t find her work in that movie exaggerated. She was playing a particular character and she did it to perfection.

Jennifer Jones finally gets dome well deserved comments on being
a fine actress and being ins some great movies.
I’m already looking forward to the event on TCM on Monday
August 17.
The jury has been out on a decision of the talent of Miss
Jones, but she is a great actress. Of course, she had some
excellent roles but what actor could have gone from westerns
at Republic Studios to a beautifully acted “Song of Bernadette”,
and “Portrait of Jennie” to fixing the plumbing in a kitchen sink
in “Cluny Brown”. ….a young girl in love in “Since You Went
Away” to the sexy half breed Pearl in “Duel In The Sun”.
Yep, it is about time the public at large saw the greatness in
her performances.
She is not the most beautiful of women but her roles and
look on the screen blew me away.

Thanks for writing.
I’ve added a comment on the Marion Davies Syndrome (re: the lack of critical appreciation of Jennifer Jones’ talent) to the post.