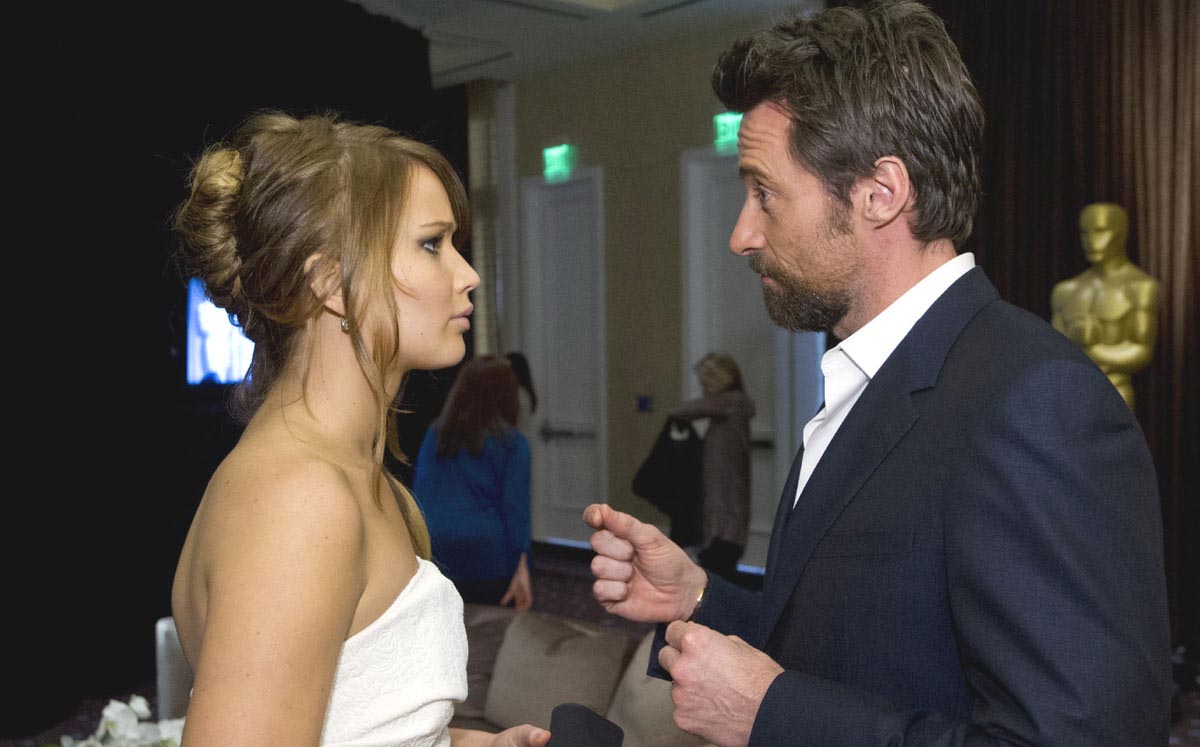 Jennifer Lawrence and Hugh Jackman were among those in attendance at the Academy of Motion Picture Arts and Sciences’ 2013 Oscar Nominees Luncheon, which took place earlier today at the Beverly Hilton Hotel in Beverly Hills. Nearly all of the 20 nominees in the acting categories showed up, in addition to approximately 140 others nominees in the numerous Oscar 2013 categories. (Image: Jennifer Lawrence, Hugh Jackman chatting at the 2013 Oscar Nominees Luncheon.)

Among Oscar 2013’s Best Director nominees, those who were supposed to be present were Life of Pi‘s Ang Lee, Silver Linings Playbook‘s David O. Russell, Lincoln‘s Steven Spielberg and Beasts of the Southern Wild‘s Benh Zeitlin. (Amour‘s Michael Haneke was the one hold-out.) Besides those, three of last year’s four Governors Awards recipients were also supposed to show up: Jeffrey Katzenberg, Hal Needham, and George Stevens Jr.

Hugh Jackman had never been nominated for an Academy Award. Among Jackman’s film credits in the last 15 years are Christopher Nolan’s The Prestige, in which he plays Christian Bale’s nemesis who never seems to give up; Gavin Hood’s X-Men Origins: Wolverine, in which Jackman has the title role; and Stephen Sommers’ Van Helsing, also in the title role.

The 2013 Academy Awards ceremony will be held on Sunday, Feb. 24, at the Dolby Theatre at Hollywood & Highland Center in Los Angeles. 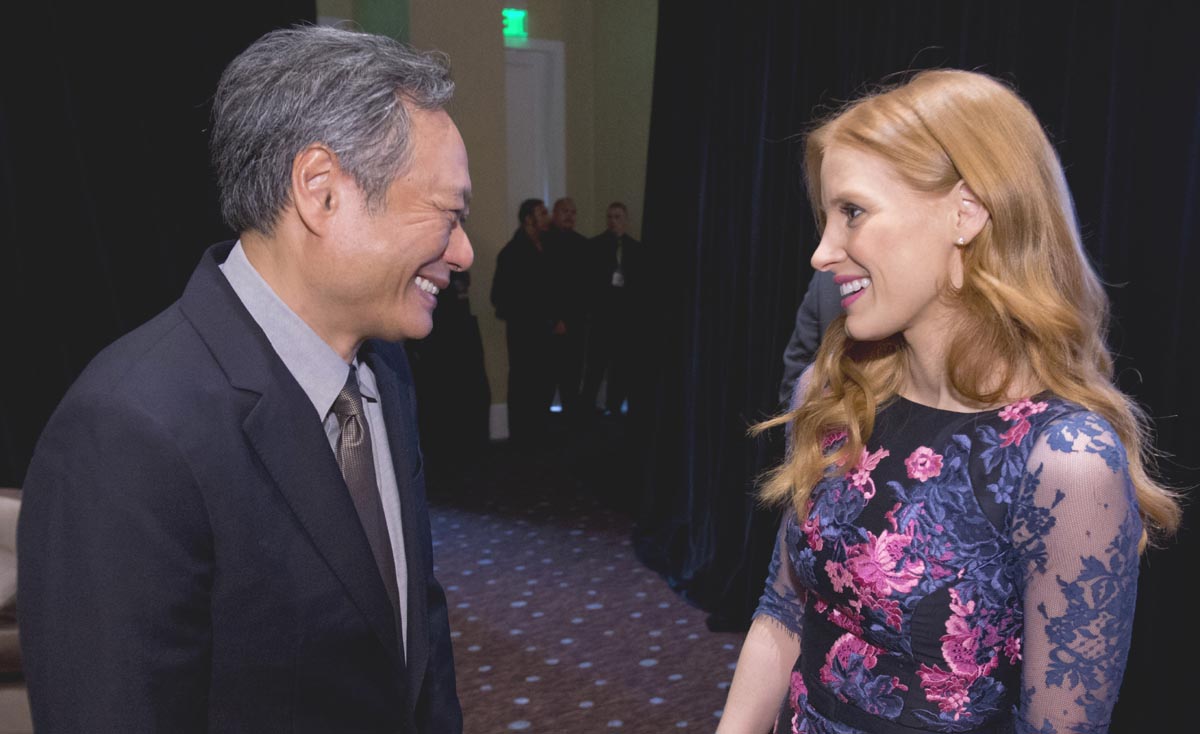 Jessica Chastain and Ang Lee, both in the running for the 2013 Academy Awards, were present at this year’s Oscar Nominees Luncheon, which was held at the Beverly Hilton Hotel in Beverly Hills. The Academy of Motion Picture Arts and Sciences’ press release claimed that about 160 Oscar 2013 nominees were expected to be on hand at the Nominees Luncheon. (Image: Ang Lee, Jessica Chastain chatting away.)

Ang Lee won the Best Director Oscar in early 2006 for the gay cowboy / sheepherder drama Brokeback Mountain, starring Heath Ledger and Jake Gyllenhaal as the star-crossed lovers. Lee was also nominated for the Chinese-made Crouching Tiger Hidden Dragon (2000). Back in early 1996, Sense and Sensibility was nominated for Best Picture, but Lee was bypassed in the Best Director category. Additionally, The Wedding Banquet (1993) was a Best Foreign Language Film nominee.

Jessica Chastain became a film sensation of sorts in 2011, when the stage actress was featured in what seemed like 300 movies. Chastain was eventually singled out by numerous critics groups for her multifarious performances (e.g., Jeff Nichols’ Take Shelter, Terrence Malick’s The Tree of Life, Ralph Fiennes’ Coriolanus, etc.), ultimately receiving a Best Supporting Actress Academy Award nomination for Tate Taylor’s The Help.

Jessica Chastain slowed down a bit in 2012: she only had about 30 movies out. This year, she’s a Best Actress nominee for Kathryn Bigelow’s highly controversial Zero Dark Thirty, about the U.S. government’s hunt for Osama bin Laden. 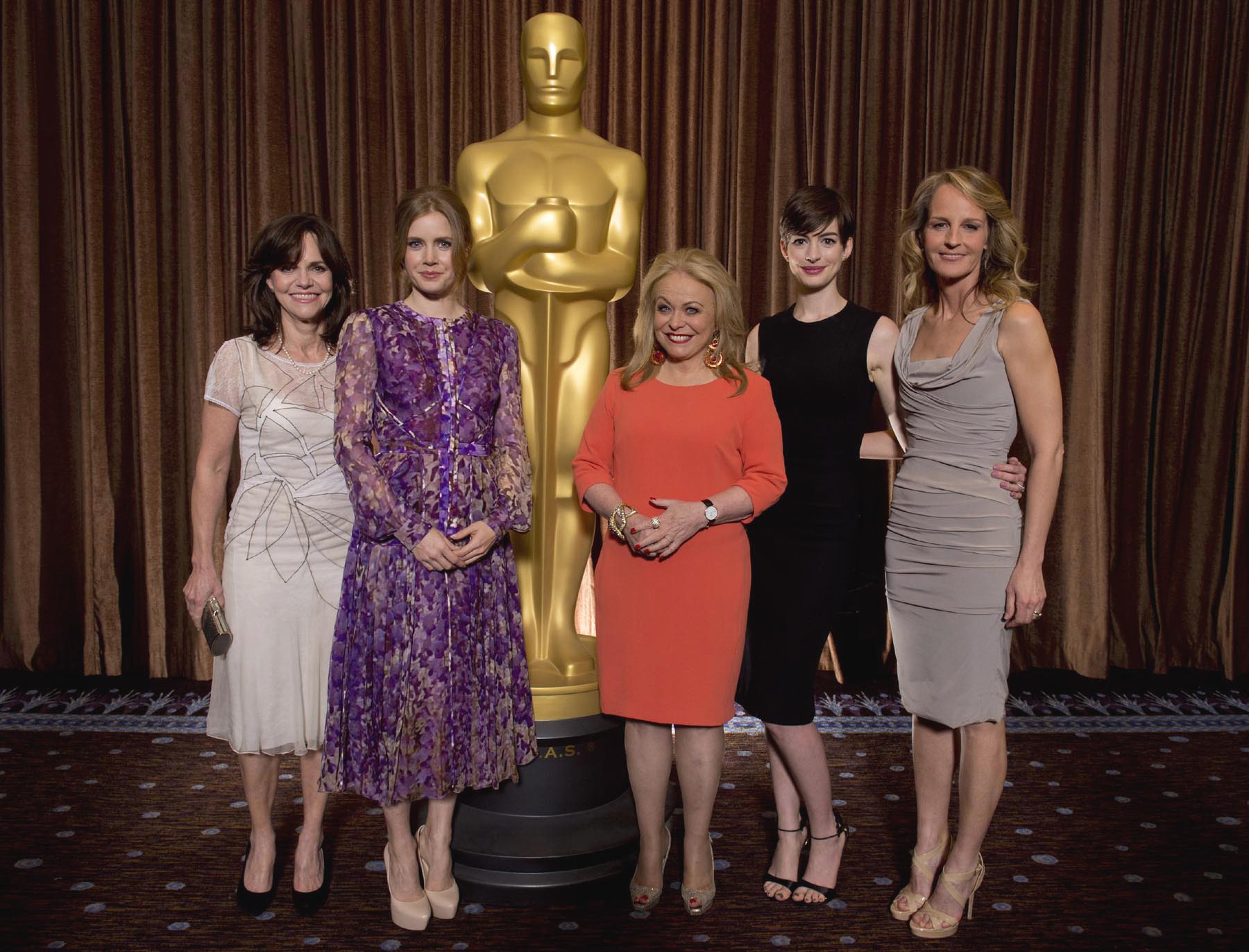 Anne Hathaway, Amy Adams, Sally Field, Helen Hunt, and Jacki Weaver were all in attendance at the 2013 Oscar Nominees Luncheon held at the Beverly Hilton Hotel in Beverly Hills on Monday, February 4. Hathaway, Adams, Field, Hunt, and Weaver, I should add, are all 2013 Best Supporting Actress Oscar nominees. (Photo, from left to right: Sally Field, Amy Adams, Jacki Weaver, Anne Hathaway and Helen Hunt. Please click on it to check out the full-size, high-resolution image.)

Anne Hathaway, the favorite to take home this year’s Best Supporting Actress Oscar for her performance as Fantine in Tom Hooper’s Les Misérables, has one previous Oscar nod: for Jonathan Demme’s Rachel Getting Married (2008). Helen Hunt, for her part, won the Best Actress Oscar for James L. Brooks’ comedy As Good as It Gets (1997), co-starring Best Actor winner Jack Nicholson and Greg Kinnear. Hunt’s nomination for The Sessions, in which she plays John Hawkes’ therapist, is her first in fifteen years.

Amy Adams deserves to take home the Oscar this year!