Jennifer Lawrence’s Best Actress Oscar 2013 acceptance speech: “Thank you. You guys are just standing up because you feel bad that I fell and that’s really embarrassing but thank you. [Twenty-two-year-old Jennifer Lawrence, whose movie career spans four years, received a standing ovation like Barbra Streisand and Shirley Bassey and Daniel Day-Lewis.] This is nuts. Thank you to the Academy and thank you to the women this year. You were so magnificent and so inspiring and not just those of you in my category. And it’s been so amazing getting to know you and you’ve been so nice and you’ve made this experience unforgettable. (Image: Eventual Best Actress Oscar winner Jennifer Lawrence does a Statue of Liberty impersonation on Oscar red carpet while Kristin Chenoweth looks on. Click on the photo to check out the full-size image.)

“And thank you to the best producing team: Bruce, Donna, Jon and to my team at CAA and IDPR. And Bradley, and our entire cast: Chris, Jacki, Bob and our crew. My family. Happy birthday, Emmanuelle. Thank you so much. Thanks.” 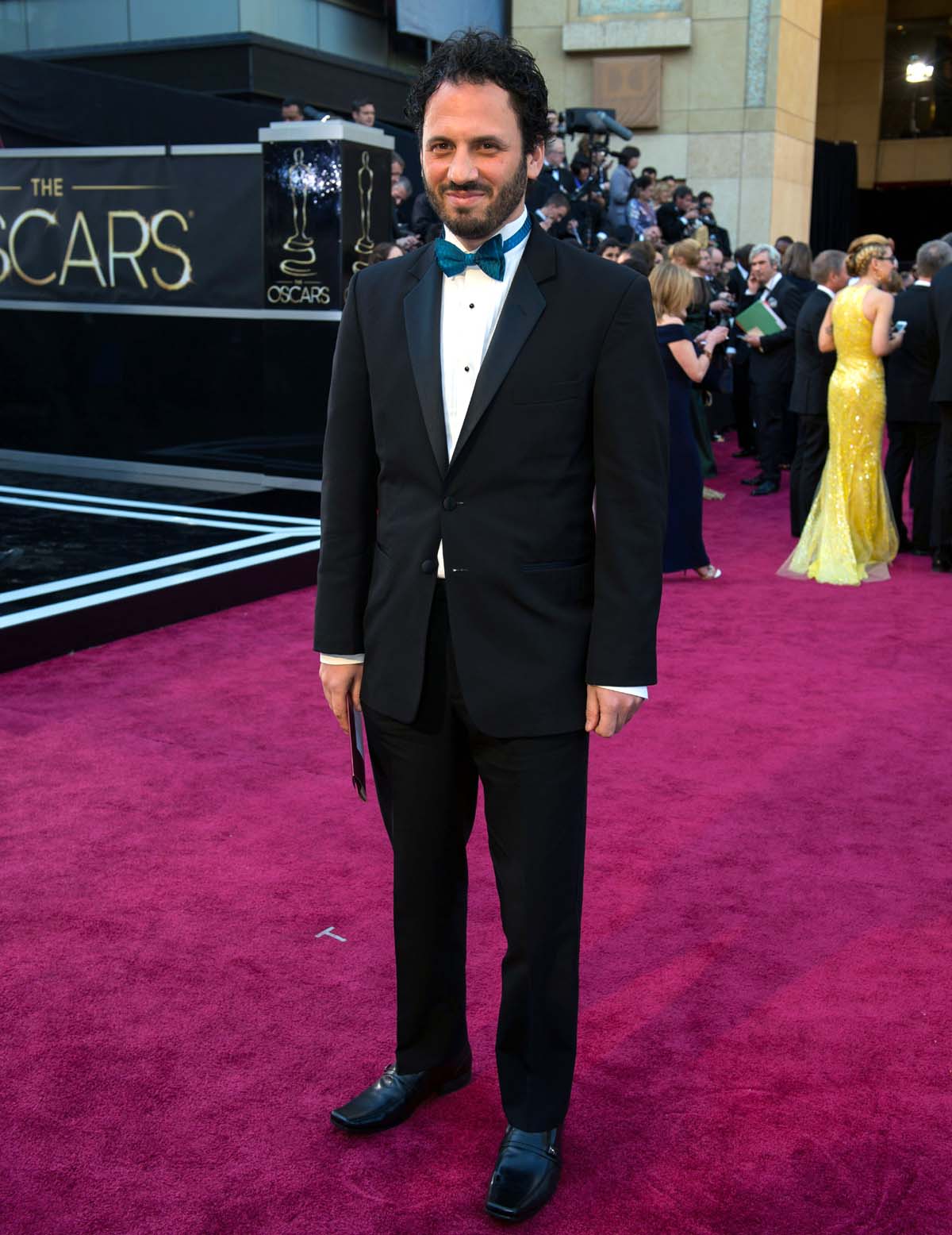 In the press room, 2013 Best Actress Oscar winner Jennifer Lawrence had to field questions from journalists. One of those referred to issue of mental illness as portrayed in David O. Russell’s Silver Linings Playbook and Lawrence’s Best Actress win. Her response: “I don’t think that we’re going to stop until we get rid of the stigma for mental illness. … It’s just so it’s so bizarre how in this world you have to if you have asthma, you take asthma medicine; if you have diabetes, you take diabetes medicine. If you have to take medication for your mind, there’s such a stigma behind it.”

Discussing the hours before the Oscar 2013 ceremony, Jennifer Lawrence compared herself to Steve Martin in Father of the Bride, “watching my house just be torn apart, and my whole family was getting ready.” When a journalist asked her if the fall on the way to the stage to collect her Oscar statuette had been on purpose, Lawrence answered, “Absolutely.” The journalist then asked what happened, to which Lawrence responded, “What do you mean what happened? Look at my dress. I tried to walk up stairs in this dress. That’s what happened.”

After a journalist asked Lawrence if she felt her career might be peaking too soon – a Best Actress Oscar winner at age 22 – Lawrence said “Well, now I am,” and then turned to the moderator to complain, “I feel like you’re picking people to make fun of me.” The moderator denied doing so.

And finally … Unlike some who were offended by Oscar 2013 host Seth MacFarlane’s “boob song,” Jennifer Lawrence claimed she “loved the boob song. I thought he was great, I thought he was hilarious.”

Jennifer Lawrence’s Best Actress competitors were veteran Emmanuelle Riva for Michael Haneke’s Amour, Naomi Watts for Juan Antonio Bayona’s The Impossible, Jessica Chastain for Kathryn Bigelow’s Zero Dark Thirty, and Quvenzhané Wallis for Benh Zeitlin’s Beasts of the Southern Wild. While picking up her award, Lawrence received a curious standing ovation, which until then had been reserved to veterans Shirley Bassey, Barbra Streisand, and Daniel Day-Lewis (plus Jennifer Hudson, for her Dreamgirls singing performance on stage).

Lawrence has been featured in movies for all of four years. She earned a previous Best Actress Oscar nomination two years ago for Debra Granik’s drama Winter’s Bone, with John Hawkes.

Her other movie credits include Gary Ross’ blockbuster The Hunger Games, with Liam Hemsworth and Josh Hutcherson; Matthew Vaughn’s X-Men: First Class, with Michael Fassbender and James McAvoy; Mark Tonderai’s horror thriller House at the End of the Street, with Max Thieriot and Elisabeth Shue; Jodie Foster’s The Beaver, with Mel Gibson; Drake Doremus’ Like Crazy, with Felicity Jones and Anton Yelchin; and Guillermo Arriaga’s The Burning Plain, with Charlize Theron and John Corbett.

Update: Was Emmanuelle Riva’s Best Actress loss to Jennifer Lawrence due to direct interference from the White House? Considering the absurdity of it all and Michelle Obama’s “presence” at the Oscar 2013 ceremony (“live” from Washington), one might think so. But no. Academy members don’t need guidance from the White House to make these kinds of choices, as a quick glance at Oscar history will show you. Even so, Oscarmeister Harvey Weinstein apparently was taking no chances. (Image: Bradley Cooper and Jennifer Lawrence in Silver Linings Playbook.)

But why hire a political campaign manager to run an Oscar campaign? Well, in the year of Ben Affleck’s (eventual Best Picture winner) Argo, Kathryn Bigelow’s Zero Dark Thirty, and Steven Spielberg’s Lincoln, Silver Linings Playbook might have been perceived as too lightweight. As the Vulture explains, Weinstein wanted the world (read: Academy of Motion Picture Arts and Sciences voting members) to learn that his film dealt with serious issues, too.

Thus, Silver Linings Playbook was to be portrayed as “not just as a well-made movie, but a culturally relevant and especially politically significant film that was shaping the national conversation about mental health triggered in part by the shootings in Newtown, Connecticut.” Tacky? Tasteless? Repulsive? Accurate?

Whichever way you look at it, someone got vice president Joe Biden to meet with Bradley Cooper and David O. Russell to “chat about mental-health reform.” Russell does have a son suffering from bipolar disorder. Now, it’s unclear what Bradley Cooper’s mental-health credentials are.

On her personal Twitter account, in the last couple of weeks Stephanie Cutter posted a couple of Silver Linings Playbook-related messages. One read: “We’re a little over a week away from Oscars. Check out the making of Silver Linings Playbook. Love this movie.” A more recent one (after Oscar 2013 polls had already been closed) read: “Oscar week – who are you routing [sic] for?,” followed by a link to a Salon.com piece titled “Could Silver Linings Playbook grab the top Oscar?: How Harvey Weinstein’s mental-illness rom-com might just steal Argo‘s thunder.”

Vulture adds that Cutter hasn’t responded to an email inquiry, while Harvey Weinstein has declined to comment. An official message from a Weinstein Company spokesperson read:

“When it was clear that Silver Linings Playbook‘s treatment of mental health issues was becoming a topic in the advocacy community and political circles Harvey Weinstein sought the advice of a number of friends with experience in those areas, including former Senator Chris Dodd, Senators Chuck Schumer and Kristen Gillibrand, and Stephanie Cutter, who he knows from his work as a supporter of President Obama.”

It’s unclear when exactly it became clear that Silver Linings Playbook became “a topic in the advocacy community and political circles.”

Ultimately, Silver Linings Playbook ended up winning only one Academy Award: Best Actress for Jennifer Lawrence, who received a standing ovation, whether because she tripped and fell on her way to the stage or in honor of her four-year-long film career.

Also worth mentioning is that the Best Picture Oscar winners of the last years were Weinstein Company releases: Tom Hooper’s The King’s Speech and Michel Hazanavicius’ The Artist. Both also won Best Actor Oscars for, respectively, Colin Firth and Jean Dujardin. Last year, Meryl Streep was the Best Actress winner for another Weinstein release, Phyllida Lloyd’s The Iron Lady.

@Beebee: Oscar campaigning always used dirty tricks. However it should not dimimish the accomplishment made by Lawrence. With or without Harvey, she was the frontrunner to win this award pretty much during the whole season. Ones personal opinion could differ of course, I would’ve been glad if Chastain or Riva took home the statue, but they both had their obstacles to overcome when it came to winning the voters’ hearts, and again, I’m talking about pre-controversy. If you need, blame Harvey and the campaigning, but don’t try to take it out on a young talented actress, who’s just doing her job the best she can.
The standing ovation was because she tripped on her dress when walking up the stairs receiving her award. She even adressed that, as soon as she got up, saying that ‘You’re just all standing because you feel sorry for me that I fell.’

Unfortunately you forgot the main part of the story, Harvey Weinstein bought her her Oscar and he tried to buy Silver Linings Playbook an Oscar by getting the White House associates involved in some mental campaign to help promote the film.

Notice how the senators attacked Zero Dark Thirty viciously after Jessica Chastain won the Golden Globe? Notice how she never won another major award afterward? Zero Dark was shut out of the awards. That was Harvey. Jessica was set to win that Oscar and should have.

Harvey called in a favor with Diane Feinstein, Cali senator and suddenly Zero Dark becomes this sudden pariah during the beginning of awards season. Notice how after Jen Law won her first major, all is quiet on the Zero Dark frenzy from Washington. Pin drop.

Vulture came out with an article today about how Harvey secured a White House insider to help push Silver Linings. Bradley Cooper is sitting in the White House talking to the VP about mental health issues conveniently after the Conn shooting.

You so-called Hollywood reporters are full of crap. Vulture is in NY and found this out, you all know what Harvey did to Zero Dark to push Jessica out of the running in order to get Silver Linings and Jen her Oscar.

This just stinks!!! It’s obvious Harvey called on his congressional contacts he gives money to not to mention former Senator Dodd. Question? Where’s all the hoopla about Zero Dark now? Kinda quiet isn’t it? It’s been quiet after Harvey got his senate pals to make Zero Dark to hot to handle. It’s like payola. He’s Don Corleone calling in favors from his DC friends to get his film and actors Oscars.

Tommy Lee Jones should have won Best Supporting. Zero Dark Thirty was the Best Movie of the Year. Jessica deserved that Best Actress Award!!! But Harvey couldn’t fight off that Clooney/Affleck charm with his DC connections but he knocked out Chastain for Lawrence.

If I was Jennifer and I found out all of the dirt Harvey pulled off to get me that Oscar, I would give it back because everyone will know you only got it because the Don…I mean Harvey called in favors to trash a damn good film like Zero Dark, kept Katherine Bigelow out of the Best Director nom and probably did it against Affleck too!

At least we know Clooney has some power in Hollywood. Funny how Jennifer kept forgetting to thank Harvey “on camera” with all eyes watching? How do you forget to thank Harvey? Funny how she didn’t go to that White House appearance with Bradley. She knew what Harvey was doing! She knew.

Harvey needs to go down behind this. It’s time to run him out of Hollywood. When you start calling in favors from the White House, that’s power no one should have.

Do your jobs!!! Dig this story out and stop treating Jen like she’s the next princess of Hollywood!! She didn’t earn that Oscar! Jessica earn it. What? He hook you up with a good swag bag?! Whomever that director was that The Hollywood Reporter spoke to knew what was going on. He knew too! But he wasn’t buying what Harvey was selling.

It’s sad…I’m going to watch and see which one of you Hollywood reporting sites will pick up this story from Vulture (who’s in NY) and do some Woodward and Bernstein investigating and BLOW HARVEY’S GAME UP!!!