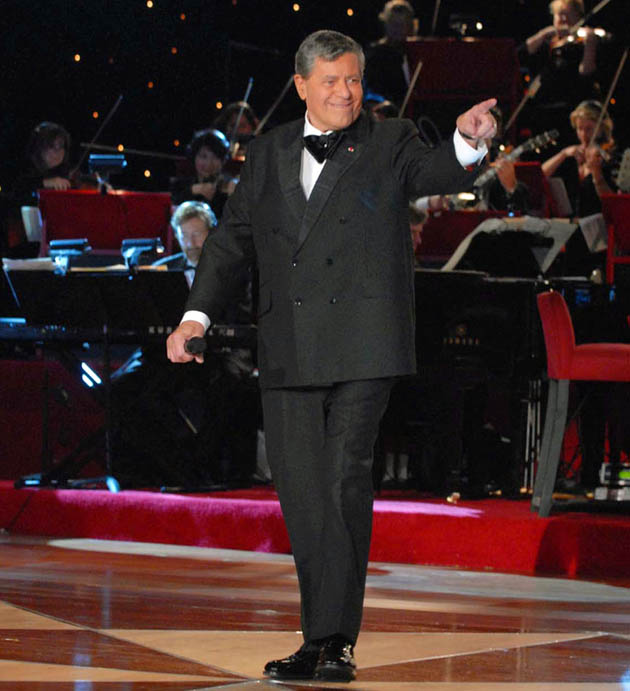 Dec. 11: Jerry Lewis, whose film career dates back to the late 1940s, will receive the Academy of Motion Picture Arts and Sciences’ Jean Hersholt Humanitarian Award at the 2009 Academy Awards ceremony on Feb. 22. The award – an Oscar statuette – is given to “an individual in the motion picture industry whose humanitarian efforts have brought credit to the industry.”

The 82-year-old comedian (born Jerome Joseph Levitch on March 16, 1926, in Newark, New Jersey) is well known for raising funds every year on behalf of the Muscular Dystrophy Association (MDA), where he has served as national chairman since 1952. As per the Academy’s press release, since the annual Jerry Lewis MDA Labor Day Telethon kicked off in 1966, the program has raised more than $2 billion for the cause.

Update: It could be that not everyone with muscular dystrophy is pleased with Jerry Lewis’ work, or with the fact that he’ll be receiving a Jean Hersholt Humanitarian Award. Check out the comments section at the bottom of this article.

Update II: In August 2011, the Muscular Dystrophy Association curtly announced that the 85-year-old Jerry Lewis would no longer host its annual telethons.

Admired by some in France, where he became a Legion of Honor Chevalier in 1984, Lewis has been an obvious influence on comic actors elsewhere, such as Jack Lemmon in Blake Edwards’ The Great Race and Jim Carrey in just about everything.

Yet Lewis’ reputation in the U.S. and most elsewhere has never reached the heights of comic auteurs such as Jacques Tati, Charles Chaplin, or Buster Keaton.

Jerry Lewis has never been nominated for an Academy Award, nor has the comedian ever received an Honorary Oscar for the bulk of his career. The Jean Hersholt Humanitarian Award will be his first Academy honor.

The 2009 Academy Award nominations will be announced on Thursday, Jan. 22, at 5:30 a.m. Pacific Time at the Academy’s Samuel Goldwyn Theater in Beverly Hills.

The Oscar ceremony will be held on Sunday, Feb. 22, at the Kodak Theatre at Hollywood & Highland Center. In the U.S., the telecast will be aired by the ABC Television Network.

Jerry Lewis in The King of Comedy. Best known as an unsubtle comedian with an elastic face and a pre-adolescent persona, Jerry Lewis delivers a surprisingly restrained and mature performance as a humorless comic stalked by a deranged fan (Robert De Niro) in Martin Scorsese’s 1983 drama The King of Comedy, a box office flop whose stature has grown with the passing of the years. Off screen, Jerry Lewis has been a divisive figure: admired because of his decades-long charity work; reviled because of behavior perceived as egomaniacal and remarks perceived as insensitive and/or bigoted.

Dec. 21 update: According to Deadline.com‘s Nikki Finke, “protests are coming into the Academy about its Board of Governors’ choice of Jerry Lewis to receive the Jean Hersholt Humanitarian Award.” The reason: Lewis’ use of anti-gay slurs.

A GLAAD article about the Rock-a-Bye Baby and Cinderfella actor discusses his latest anti-gay public slur, which took place two months ago on Australian television. That’s when Lewis said, “Oh, cricket? It’s a fag game. What are you, nuts?”

A previous such “joke” was delivered during the 2007 Labor Day Muscular Dystrophy Association Telethon itself, not too long after the Isaiah Washington gay slur controversy. Lewis later apologized.

“I say this is a terrible choice by the Academy. AMPAS isn’t bestowing on Lewis an honorary honor for his long career in the movies. The Hersholt is an award given to an individual in the motion picture industry ‘whose humanitarian efforts have brought credit to the industry.[‘] Despite Lewis’ laudatory 42 years of raising money for MDA, his publicly demonstrated debasement of gays doesn’t make him a humanitarian in my eyes.”

Now, can someone be an insensitive humanitarian? Or even be both a humanitarian and a sick, vile bigot?

Think of all those kindhearted people out there – those who do their best to help others with one hand, while with the other they strive to make life as miserable as humanly possible for the “others” associated with the wrong nationality, ethnicity, sexual orientation, religious beliefs, and so on.

Some slurs more slurry than others?

And that begs the question: In case muscular dystrophy telethon fundraising star Jerry Lewis had used some repulsively racist or misogynist or anti-Semitic slur on television, would the Academy’s Board of Governors have been willing to hand him the Jean Hersholt Humanitarian Award?

Of course, it could be that in these tough economic times the Academy just couldn’t find enough multimillionaire Hollywood philanthropists to honor with the Jean Hersholt Award this year. But then again…

It never ceases to amaze me that a Jewish individual, as I am. can take aim at another group the way Lewis did about ‘fags’.
Considering how many millions of Jews, AND ‘fags’ as well as other groups were murdered because of who they were by the Axis, it floors me to hear him talk this way.
On the other hand, I have always overestimated human intelligence. Lewis brings me down to earth . He should susbtitute the word ‘Jew’ or ‘k—-‘ for ‘fag’ and if he doesn’t respond empathically, then he’s just a jerk.

these days every minority is overly sensitive about in this case,gays and lesbians and the handicapped because jerry lewis known these days for putting his foot in his mouth and saying things. jerry lewis like everyone on the planet needs to take a class on sensitivy and better race relations.

Their pathetic “protest” was a COLOSSAL FAILURE!! Jerry Lewis got his well-deserved oscar.

Disability activists and our allies will be protesting the granting of a “humanitarian” award to Jerry Lewis, who embraces and perpetuates all the worst stereotypes about people with disabilities. For more information go to thetroublewithjerry.com

Yes, I’m among the many who protest Jerry Lewis’ receiving the humanitarian award. It’s not simply because he uses derogatory language about gay people-or even that he has repeatedly referred to people with disabilities, the people he supposedly serves, as “cripples,” or calls women nothing more than baby-making machines. This is crass language, to be sure, but maybe he thinks it’s funny.

No, the problem lies in Jerry Lewis’ MDA telethon itself. Year after year it exploits kids with disabilities to garner pity as a fund-raising technique. The pity does far more harm than good. Think about it: Would you hire one of “Jerry’s kids” for a job? Would you want your daughter to marry one?

What’s more, the pity tactic is demeaning, and the consequences to the social status and self-esteem of people with disabilities are profoundly dangerous.

But when I, a former MDA poster child, offered to work with the charity to help it update its language and improve its image, to make peace with the activists who oppose it, I got hostility in return. Lewis himself has threatened to have his critics killed.

That’s not funny. Applauding Jerry Lewis as a humanitarian IS funny, in the sense of odd. Worse than that, it’s an insult to the disability community, the gay rights community, and the memory of Jean Hersholt.

Mind you, Jerry Lewis HAS made sexist comments repeatedly, including the notorious:

“I don’t like any female comedians. A woman doing comedy doesn’t offend me, but sets me back a bit. I, as a viewer, have trouble with it. I think of her as a producing machine that brings babies in the world.”

It is not only the gay community that is angered by this award. The disability community is also angry.

There’s a Facebook devoted to organizing protests against the award:
[link no longer active]

For more information on why people with disabilities are offended by this award, check
cripcommentary.com/LewisVsDisabilityRights.html

And, as said above, there is the petition at [link no longer active]

The problem with Jerry Lewis isn’t just his anti-gay remarks. He has actually insulted the very people he claims to help with the MDA telethon. Unfortunately he uses pity to raise money, which undermines the efforts of the disability rights movement. This isn’t JUST about his attitude toward gays. If you would like to sign the petition for him NOT to receive the award or learn more about Jerry’s “half a person” remarks about people with disabilities, please visit the following link:
[link no longer active]

It’s Jerry Lewis, he’s known this sort of thing. I can’t imagine the anyone could ever be truly offended by him because this sort of thing is expected of him. I however do not think charity work excuses him from being so out of touch.

You can have a big heart and still be an ass. His charity work actually helped my father’s grandparents pay for a great of the medical expenses when my gradmother contracted polio so I think Jerry is a good person, but a good person who talks out of his rear end.

CORRECT:I MEANT TO SAY I AM NOT DEFENDING WHAT HE SAID THEN,NOW AND IN THE FUTURE.BUT EVERYTIME SOME SAY SOMETHING,YOU DON’T LIKE,YOU EITHER PROTEST OR BAD MOUTH BEHIND THEIR BACKS,BECAUSE SOME PEOPLE GO BIG MOUTHS AND DO’NT USE THEIR BRAINS,OR IN JERRY LEWIS’ CASE,TRY A ATEMPT AT HUMOR.LIKE AFRICAN-AMERICANS,JEWS AND EVERYONE ELSE,YOU NEED TO GET A LIFE AND STOP BEING SO OVERLY SENSITIVE.WE HAVE ANOTHER PROBLEMS IN THIS COUNTRY AND THE WORLD TO WORRY ABOUT,WE DO NOT NEED ANYMORE.

WE LIVE IN A COUNTRY TODAY WHICH EVERYTIME SOMEONE SAYS SOMETHING ABOUT SOMEONE(JOKINGLY OR NOT)EVERYBODY GETS SO OVERLY SENSITIVE.EITHER ABOUT THEIR RACE OR THEIR RELIGION OR THEIR SEXUAL PREFRENCE.EVERYONE NEEDS TO GET A LIFE AND GET ON WITH IT.MR. LEWIS IS 82YRS.OLD,AND HE SAYS THINGS SOMETIME WITHOUT THINKING OR ATTEMPT AT HUMOR.HE IS NOY A BIGOT OR HOMOPHIC.GAYS AND LESBIANS NEED TO STOP BEING SO DAMN SENITIVE ABOUT WHAT PEOPLE(FAMOUS OR NOT)SAY,SO GET A LIFE.IT TOOK 45YRS. FOR THE MOTION PICTURE ACADEMY TO SOMETHING RIGHT FOR ONCE AND FINALLY HONOR JERRY LEWIS(EVEN IF IT’S NOT A HONORARY OSCAR)WITH A OSCAR OF ANY KIND.I AM NOT DEFENDING WHAT HE,AS I SAID BEFORE,STOP BEING SO OVER SENSITVE AND GET OVER IT AND GET A LIFE.I AM SICK OVER THIS NONSENSE.