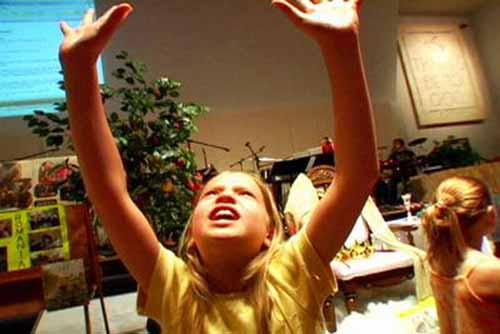 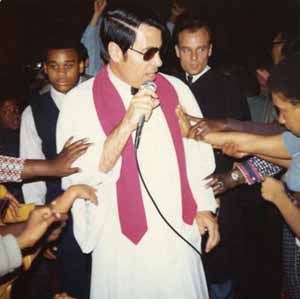 Stanley Nelson’s Jonestown: The Life and Death of Peoples Temple and Heidi Ewing and Rachel Grady’s Jesus Camp (above) will be screened as part of the Academy of Motion Picture Arts and Sciences’ 26th annual Contemporary Documentaries series on Wednesday, Oct. 3, at 7 p.m. at the Academy’s Linwood Dunn Theater in Hollywood. Admission is free.

Religion is the nominal topic of both documentaries, but brainwashing and its ensuing dire consequences – potential or realized – is their actual theme.

Jones attracted a multiethnic congregation by preaching about integration and equality. In November 1978, more than 900 members of his church died in the largest mass suicide/murder in recent history. (Not counting wars and terrorist attacks, of course.) Stanley Nelson’s documentary feature tells the story of Jones’ devoted followers.

As per the Academy’s press release, “Jesus Camp examines a camp [“Kids on Fire”] in America’s heartland where born-again Christian children whose upbringing includes an intense combination of Bible study, home schooling and street evangelism are drilled in political activism, radical views and the development of their prophetic gifts. The young soldiers in God’s army seek to become an active part of this country’s political future and to take back America for Christ.”

Gee whiz, by golly, what’s wrong with that?

Well, just replace “Bible” with “Koran,” “God” with “Allah,” and “Jesus” with “Mohammed,” and see how frightening those camps are. Religious fanatics are religious fanatics, no matter their divinity of choice.

(One of the Jesus Camp star attractions, Rev. Ted Haggard [right], listed by Time as one of the the US’s most influential Evangelical preachers, became entangled in a rather un-evangelical brouhaha involving allegations of drug abuse and gay sex with a prostitute/masseur. Ah, and “Kids On Fire” was shut down not long after the release of Jesus Camp.)

The first part of the Contemporary Documentaries series comprises 13 feature-length and short documentaries that will screen on Wednesday evenings through November 28, and includes several of the 2006 Academy Award-nominated films as well as other documentaries considered by the Academy that year. The series will resume in March 2008 and continue through June.

The Linwood Dunn Theater is located at 1313 Vine Street in Hollywood. All seating is unreserved. Free parking is available through the entrance on Homewood Avenue (one block north of Fountain Avenue). For additional information, visit www.oscars.org or call (310) 247-3600.

As the next installment of “Oscar’s Docs, Part Three: Academy Award-Winning Documentaries 1977–1988,” the 1981 Oscar-winning documentaries Close Harmony and Genocide will be screened on Monday, Oct. 8, at 7:30 p.m. at the Academy of Motion Picture Arts and Sciences’ Linwood Dunn Theater in Hollywood.

Producer-director Nigel Noble will be on hand to discuss his short film Close Harmony, which follows a Brooklyn teacher trying to integrate two choirs – one composed of grade school students, the other of senior citizens – for a combined concert.

Director Arnold Schwartzman will discuss his feature-length Genocide, which contrasts the stories of the thriving Jewish cultures in pre-war Europe with those of Holocaust victims. Elizabeth Taylor and Orson Welles narrate.

The New York Times called Genocide “chilling and forceful, profoundly harrowing. It certainly succeeds. Elizabeth Taylor is particularly affecting.” (At the IMDb, however, one reviewer offers the curious complaint that photos shown in the film don’t actually represent what they’re supposed to.)

The retrospective will present the best available prints, often newly struck or restored editions from the documentary collection of the Academy Film Archive. The series will continue each Monday evening through Nov. 19 and will be complemented on many nights with onstage discussions with the filmmakers (schedules permitting).